Effects of wearing a Covid face mask on your brain

Wearing a face mask can substantially reduce your ability to make quality decisions in some situations, according to a new study, because they can be a distraction.

University of Queensland researcher Dr David Smerdon wanted to know how the most visible tool used to suppress COVID-19 affects human thinking, so he studied the moves of more than 8,000 chess players in 19 countries before and during the pandemic to find out.

Overall, he found that wearing a face mask substantially reduces the quality of a player’s moves.

‘Masks substantially reduced the average quality of cognitive decisions,’ said the study, published US journal Proceedings of the National Academy of Sciences on Tuesday.

Researchers found wearing a face mask substantially reduces the quality of a player’s moves during a high stakes game of chess (pictured, Brisbane)

‘However, the negative effect is short-lived and primarily operates on elite players and in high-incentive contexts, with minimal impact on the broader population of players.’

The mask-wearing effect is also greater on stronger players, the study said, and is more pronounced during high-incentive tournaments.

Dr Smerdon, himself a chess grandmaster, said those findings matched up with the theory that masks distract players from making higher-quality moves.

‘The decrease in performance was due to the annoyance caused by the masks rather than a physiological mechanism, but people adapted to the distraction over time,’ he said in a statement.

‘The data showed masks were more likely to decrease performance in situations where there was a demanding mental task with a high working memory load.

‘This is something to keep in mind for occupations in the STEM fields of science, technology, engineering and mathematics as well as other professions that demand a high level of working memory such as language interpreters, performers, waiters and teachers.’ 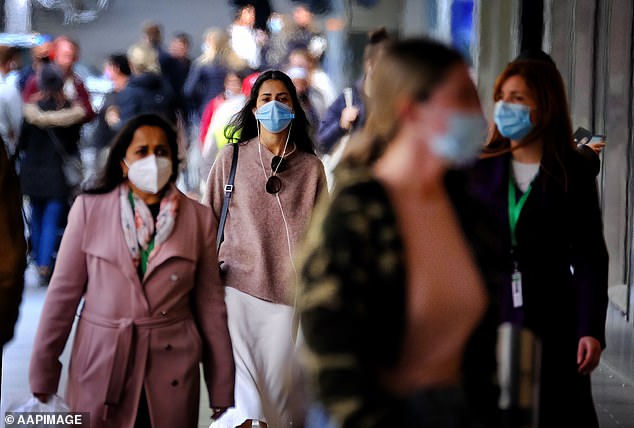 ‘However, the negative effect is short-lived and primarily operates on elite players and in high-incentive contexts, with minimal impact on the broader population of players’, the research found (pictured, Melbourne)

Dr Smerdon found no evidence that masks impacted the cognitive function of people aged under 18 or those over 50-years-old, and that it had a much weaker effect on the size of errors made by players.

He said more research was needed to explain those findings, to help individuals and organisations work out when and how to use face masks.

‘The results suggest that masks are most likely to decrease performance in environments in which individuals face a cognitively demanding task with a high working memory load and in which optimal decision-making is crucial,’ the study said.

‘Investigation of the precise mechanism for the effect and the extent to which masks affect different types of cognitive tasks would seem to be promising avenues for future research.’