The female protester who allegedly egged Scott Morrison is a tattooed one-time uni student and online critic of the Prime Minister.

The woman, who calls herself Amber Paige on social media, approached the Prime Minister and allegedly smacked him in back of the head on Tuesday.

The 25-year-old was dressed in a red beanie and a ‘feminist’ T-shirt when she allegedly approached Mr Morrison at a Country Women’s Association event in Albury, New South Wales.

She is in police custody after walking herself to the station. 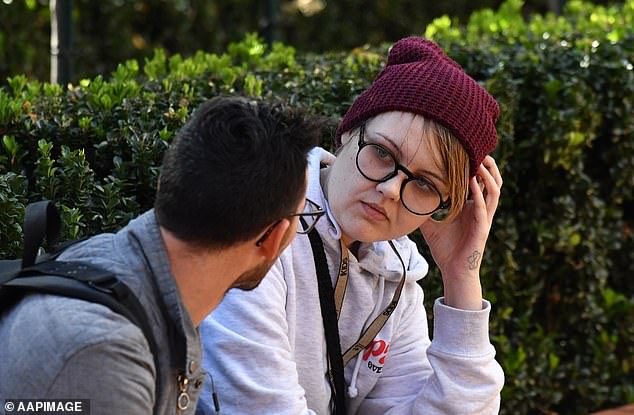 Ms Paige criticised the PM on Facebook on International Women’s Day for saying ‘we don’t want to see women rise only on the basis of others doing worse.’

She said: ‘Be mad. Be mad as hell. Don’t let his bigoted views bring you down.’

Her Facebook page said she has studied education at Charles Sturt University and worked casually at Cotton On.

Mr Morrison was mingling with a group of older women on Tuesday morning when the protester launched the missile from close behind him.

The egg skimmed his head and was later found whole and unbroken before the culprit was arrested.

After the egg was thrown, Mr Morrison appeared shocked and rubbed the back of his head as his bodyguards descended on the woman.

Videos circulating on social media showed her being wrestled after the unsuccessful protest. 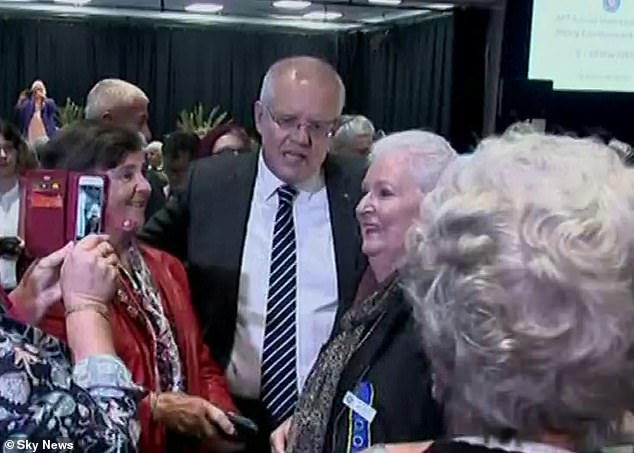 The melee caused an innocent older woman to fall over – and Mr Morrison helped her up.

After being removed from the venue, the protester was seen walking away while clutching a six-pack of eggs.

She ignored questions from reporters but apologised for the woman falling over.

‘No that was not my intention. I am sorry for that,’ she said.

The young woman was protesting the government’s asylum seeker policy of offshore detention.

She told reporters that her action ‘speaks for itself.’

‘Have you seen his video to Manus Island?,’ she asked. 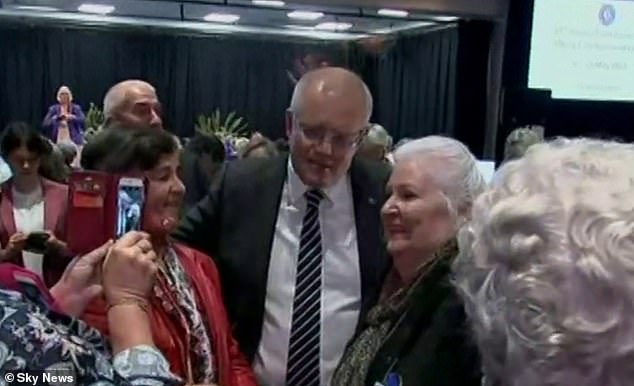 The Prime Minister appeared shocked and rubbed the back of his head. Pictured: The missile in mid air 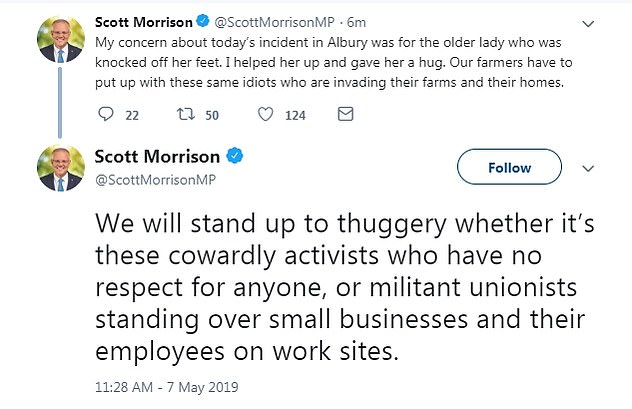 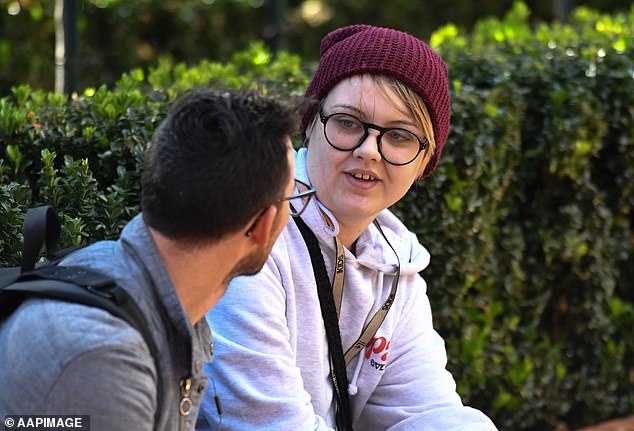 PM suffers security failure as he is egged

Scott Morrison’s security team suffered a massive breach after a protester was allowed to wander up to the Prime Minister and egg him.

The PM is given 24-hour security by a highly-trained team of armed and undercover police officers, but they did not appear to see the attack coming.

Mr Morrison, who was attending an election campaign event in Albury, in southern New South Wales, when he was attacked, is guarded by an elite team of close personal protection officers from the Australian Federal Police.

CPP officers are highly trained, and the AFP website says they: ‘must be ready to react quickly and possess the ability to swiftly evaluate a situation, use their finely honed negotiating skills or emergency driving expertise at any given moment’.

The officers are understood to work 16-hour days, four or five days a week. AFP says they are ‘fit, well groomed, discreet and professional’.

When reporters questioned her further, she said she had to go to work and she had no comment.

She denied her protest was an act of aggression.

‘It was the most harmless thing you can do,’ she said.

Mr Morrison condemned the attack as ‘thuggery’ in a tweet after the event.

He wrote: ‘My concern about today’s incident in Albury was for the older lady who was knocked off her feet.

‘I helped her up and gave her a hug. Our farmers have to put up with these same idiots who are invading their farms and their homes.’

In a second tweet he compared the protest to the actions of unions.

He wrote: ‘We will stand up to thuggery whether it’s these cowardly activists who have no respect for anyone, or militant unionists standing over small businesses and their employees on work sites.’

Opposition Leader Bill Shorten said he felt sorry for the PM and criticised the protester.

Speaking in Waurn Ponds, Victoria, he said: ‘The Prime Minister has my complete sympathy, as does the lady who was knocked over.

Meanwhile, senate candidate Fraser Anning, who was in March egged by a young protester at a rally in Melbourne, said Mr Morrison’s assailant was encouraged by the way the public responded the boy who attacked him.

The boy became a social media icon known as ‘Eggboy’ for his protest which involved smashing the egg over Anning’s head. 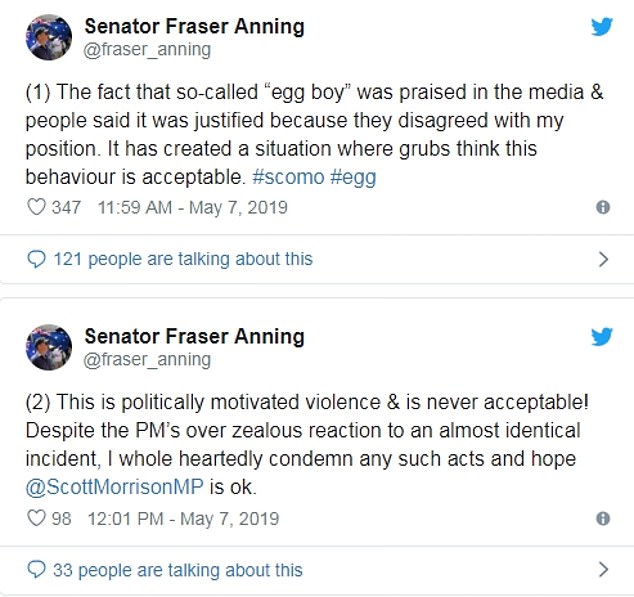 Senate candidate Fraser Anning, who was in March egged by a young protester at a rally in Melbourne, said Mr Morrison’s assailant was encouraged by the way the public responded the boy who attacked him

The woman who threw the egg at Mr Morrison was arrested and taken into custody.

A New South Wales Police spokesman said: ‘A 25-year-old woman is in custody following an incident involving the Prime Minister in Albury.

‘Officers from the Murray River police district placed the woman under arrest after she allegedly threw an egg at the PM during a CWA event at Albury entertainment centre.

‘The egg appears to have struck the Prime Minister on the head. The PM’s security team quickly restrained the woman. In the act of detaining her, another woman in attendance was knocked over.

‘No injuries have been reported and inquiries continue.

This is not the first time a Prime Minister has been targeted by missiles.

In 2013 children repeatedly threw sandwiches at Prime Minister Julia Gillard who was famously struck by white-bread salami sandwich at an event at Lyneham High in Canberra. 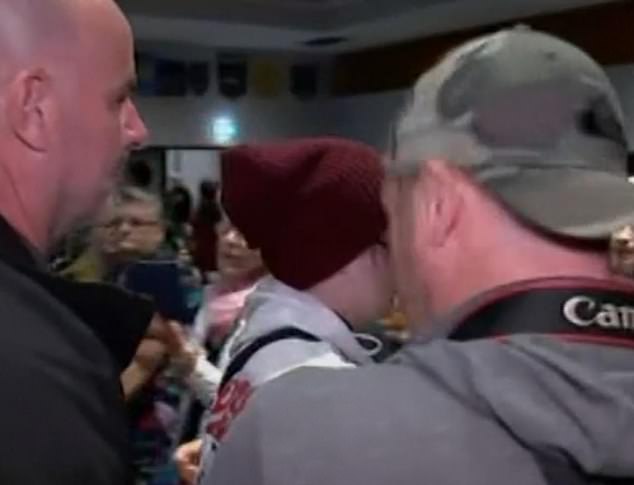 The Prime Minister was targeted by a woman (pictured in a red hat) in Albury, New South Wales