Egg ‘thrown at King Charles’ AGAIN during a walkabout in Luton

King Charles had an egg hurled at him for the second time in a month today, with police arresting a man for common assault.

Bodyguards quickly intervened to move the monarch away from the scene of the disturbance on St George’s Square in Luton.

Bedfordshire Police confirmed a suspect had been arrested and is now being questioned.

Charles, 74, appeared unfazed by the incident and quickly resumed shaking hands with members of the public after being moved to a different area. 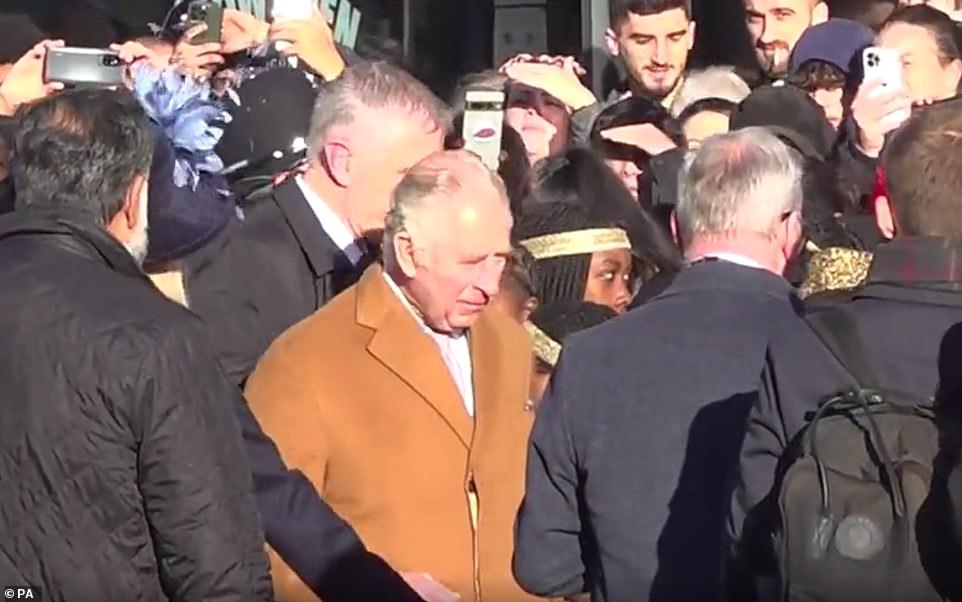 Bedfordshire Police said it had arrested a man in his twenties who is now in custody. This video still shows the moment the monarch was moved away by a bodyguard

The incident comes four weeks after 23-year-old Patrick Thelwell was arrested for throwing an egg at the King and Queen Consort during a visit to York.

The royal couple had just arrived in the city on November 9 to unveil a statue in honour of the late Queen at York Minster when a figure in the crowd threw four eggs, all of which missed.

Thelwell was later identified as a former University of York student who stood as a Green Party candidate in York for the 2019 local elections.

He later claimed to have been banned from carrying eggs in public or going within 500 metres of the monarch. 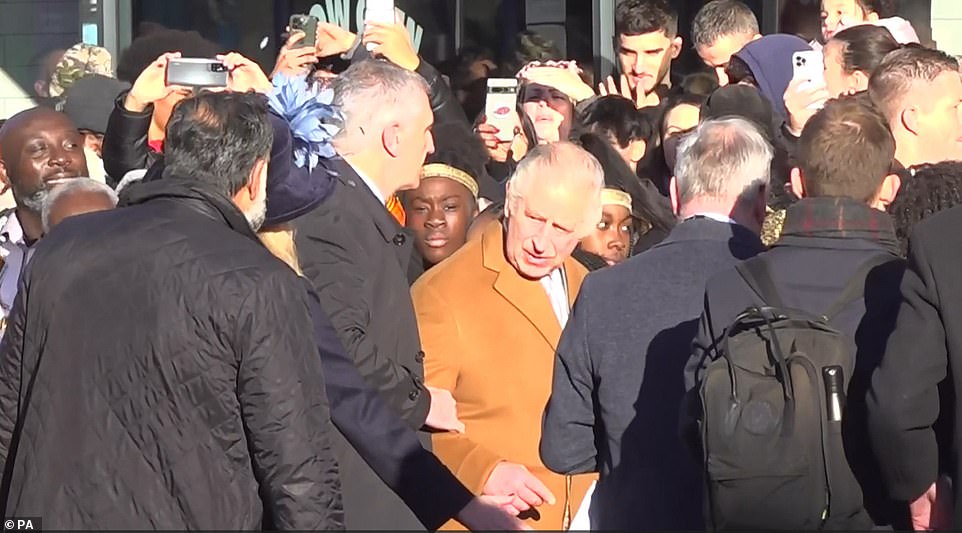 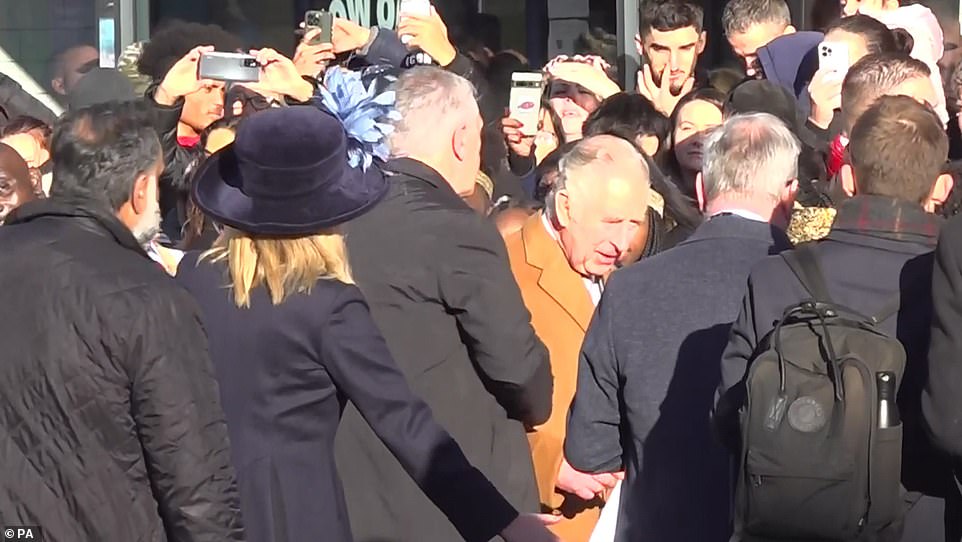 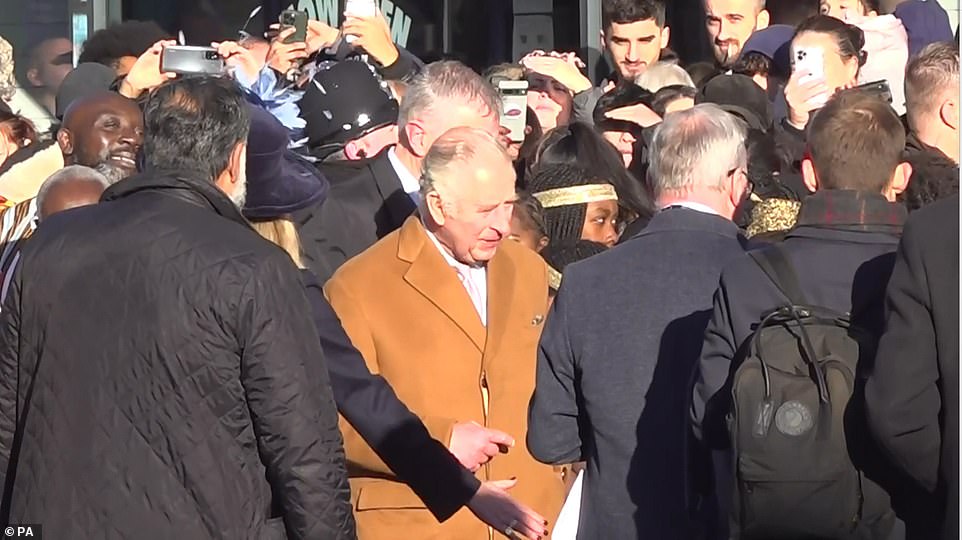 King Charles had been enjoying meeting the public when the egging was instigated today, with police quick to react

Today, the King looked relaxed as he met members of the public during his visit to Luton, just a day after the Duke of Sussex spoke of a ‘dirty game’ in a trailer for his new Netflix series.

The royals are braced for another barrage of allegations from Harry and Meghan when the series launches on Thursday.

Today, the couple are in New York for the Ripple of Hope gala, where they will receive an award for their ‘heroic’ stand against ‘structural racism’ in the Royal Family.

In other royal news – 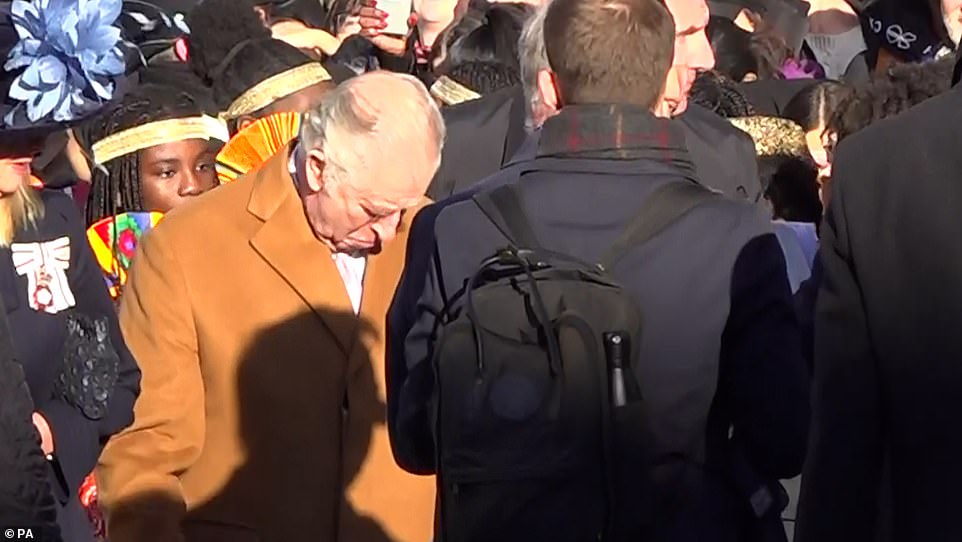 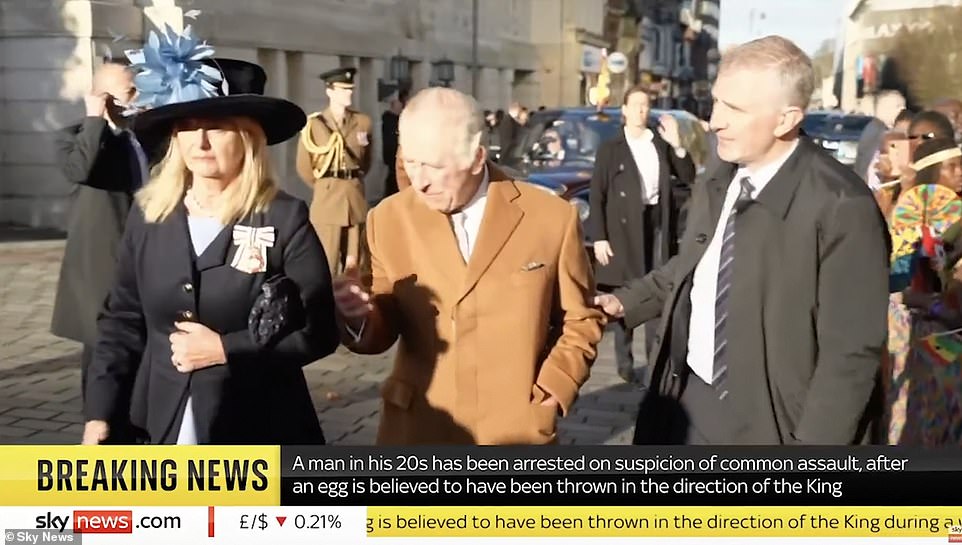 Charles, 74, appeared unfazed by the incident and quickly resumed shaking hands with members of the public after being moved to a different area 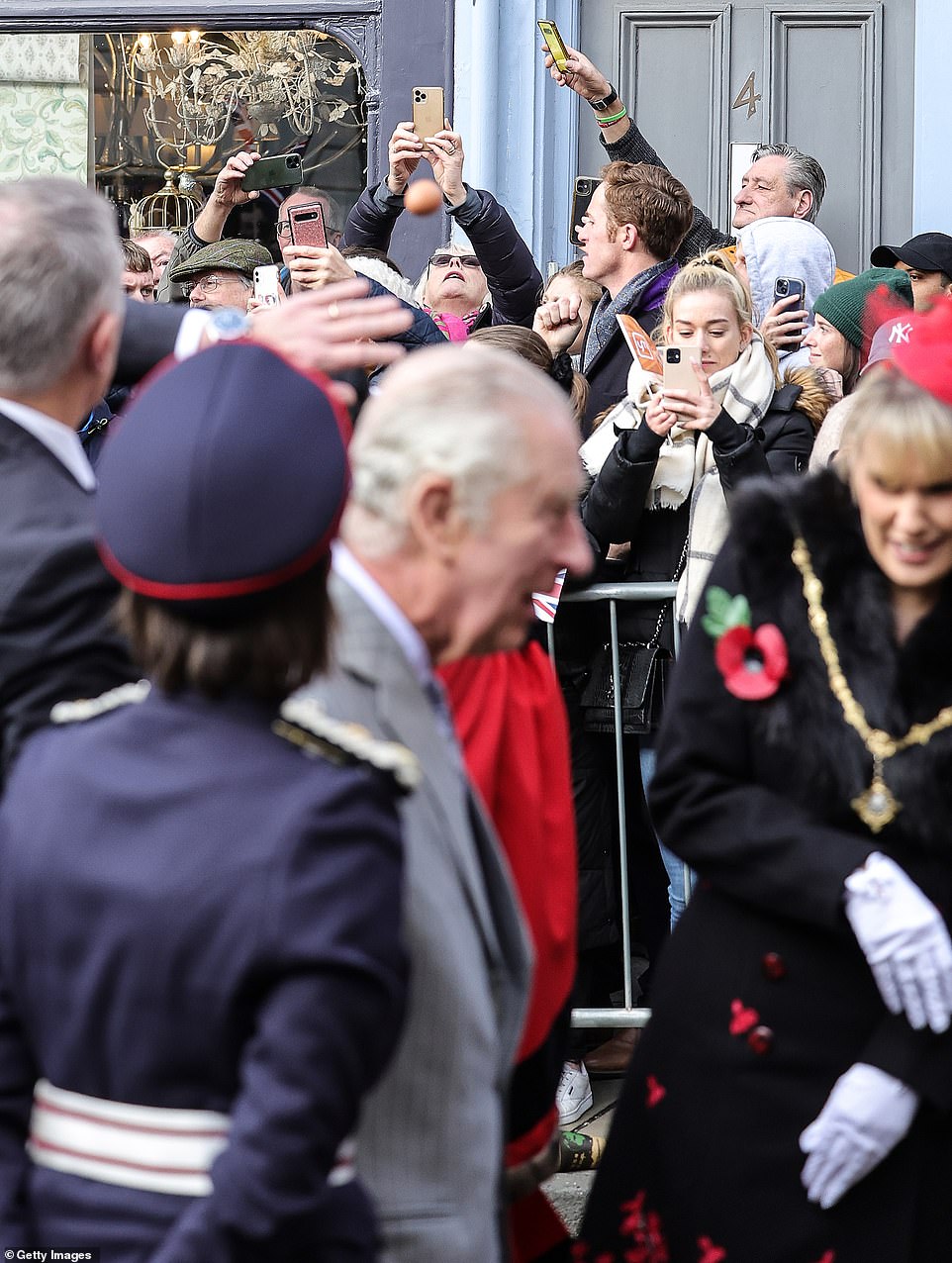 A MONTH AGO: In a previous incident, Charles, 74, was pelted with four eggs in York by a man shouting ‘this country was built on the blood of slaves’ 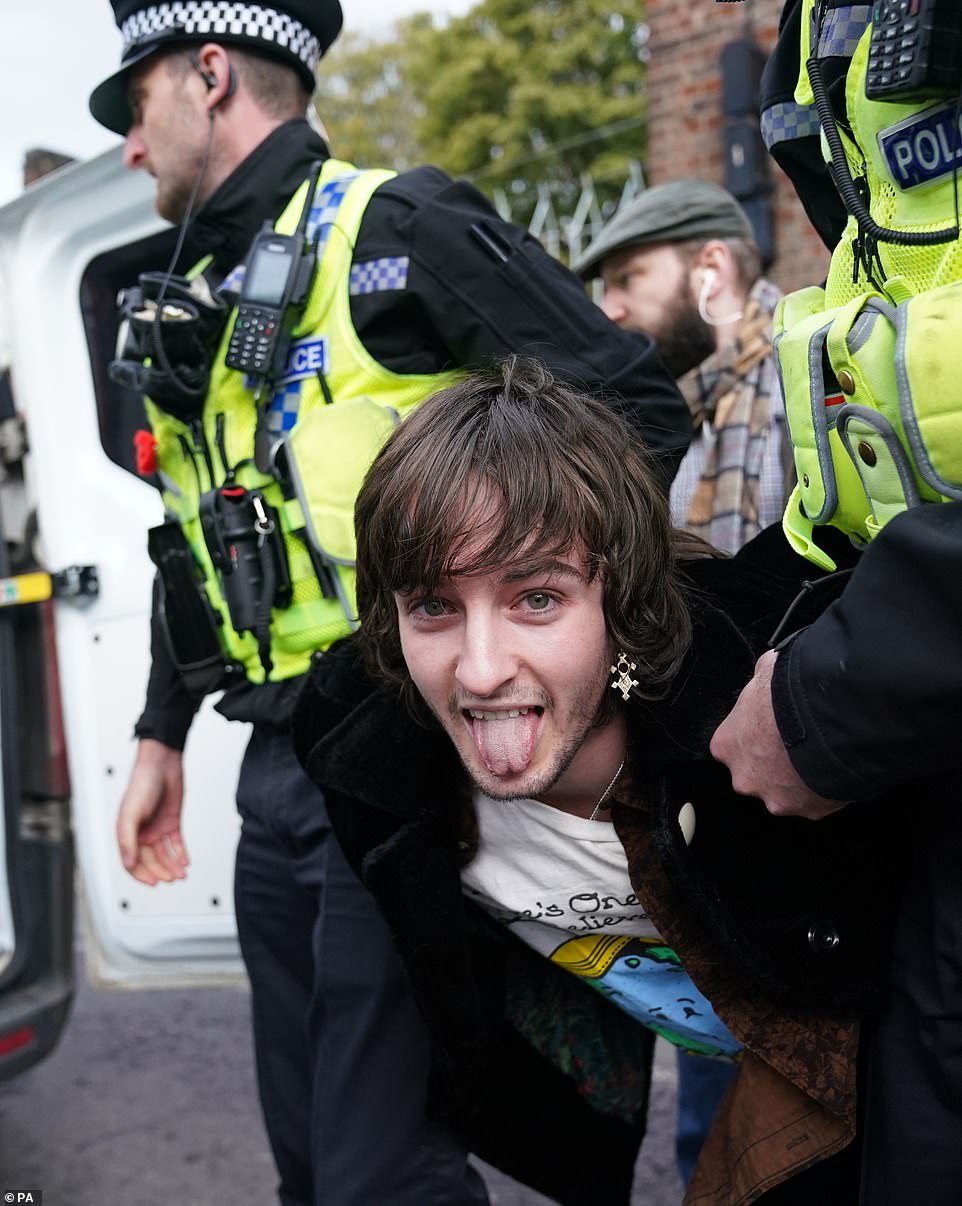 The York protester was later identified as Patrick Thelwell, a 23-year-old Extinction Rebellion activist who once stood as a Green Party candidate

Charles was all smiles in the Bedfordshire sunshine this afternoon, chatting to dozens of people at the Town Hall and the newly built Guru Nanak Gurdwara.

The King, who had a plaster on his left thumb, removed his shoes and put on a Ramaal headscarf in the Sikh temple, where he made a namaste gesture as he greeted people.

He bowed in front of the Sikh holy book, Guru Granth Sahib, and sat cross-legged on the floor, wearing an orange scarf over his suit, before being invited to unveil a plaque to mark the official opening of the Gurdwara.

The plaque included today’s date, and Charles joked that it was a good job he ‘turned up on the right day’.

During his visit to the Gurdwara he met women in the kitchen who cook for hundreds of people every day, and marvelled at their work with dough.

‘Isn’t it wonderful how they inflate?’ he said, asking if there is a ‘secret’ to the method.

Earlier, many of those who greeted Charles at the Town Hall wished him a ‘Merry Christmas’ and some had taken presents to give to him.

The King was greeted by Lord Lieutenant of Bedfordshire Susan Lousada and Mayor of Luton Sameera Saleem.

He met representatives from Luton Council as well as guests from a range of community organisations, including Bedfordshire Police and Crime Commissioner Festus Akinbusoye, who was previously supported by the Prince’s Trust.

Charles signed a visitors’ book and unveiled a plaque commemorating his visit in the Town Hall, which was opened by the Duke of Kent in 1936. 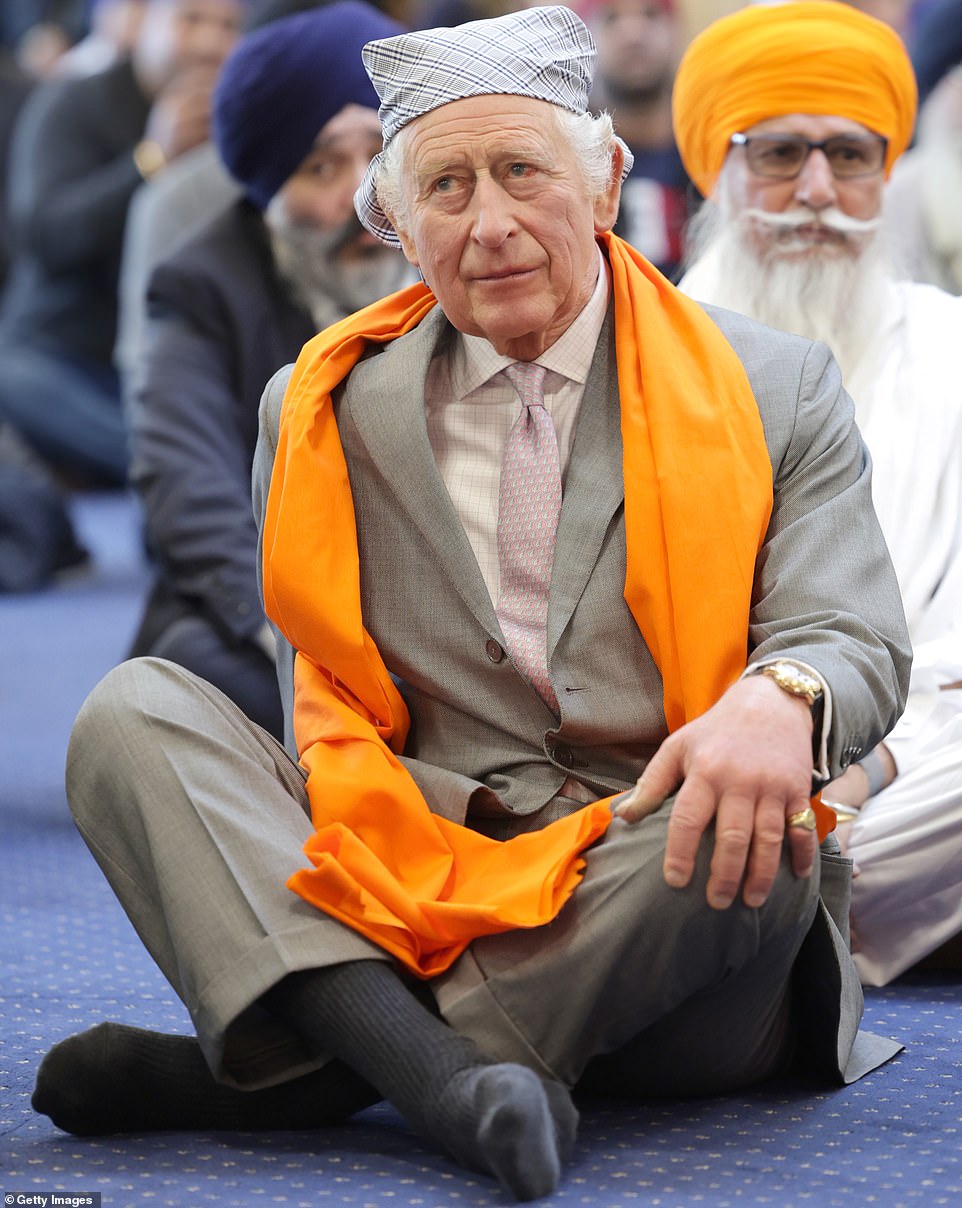 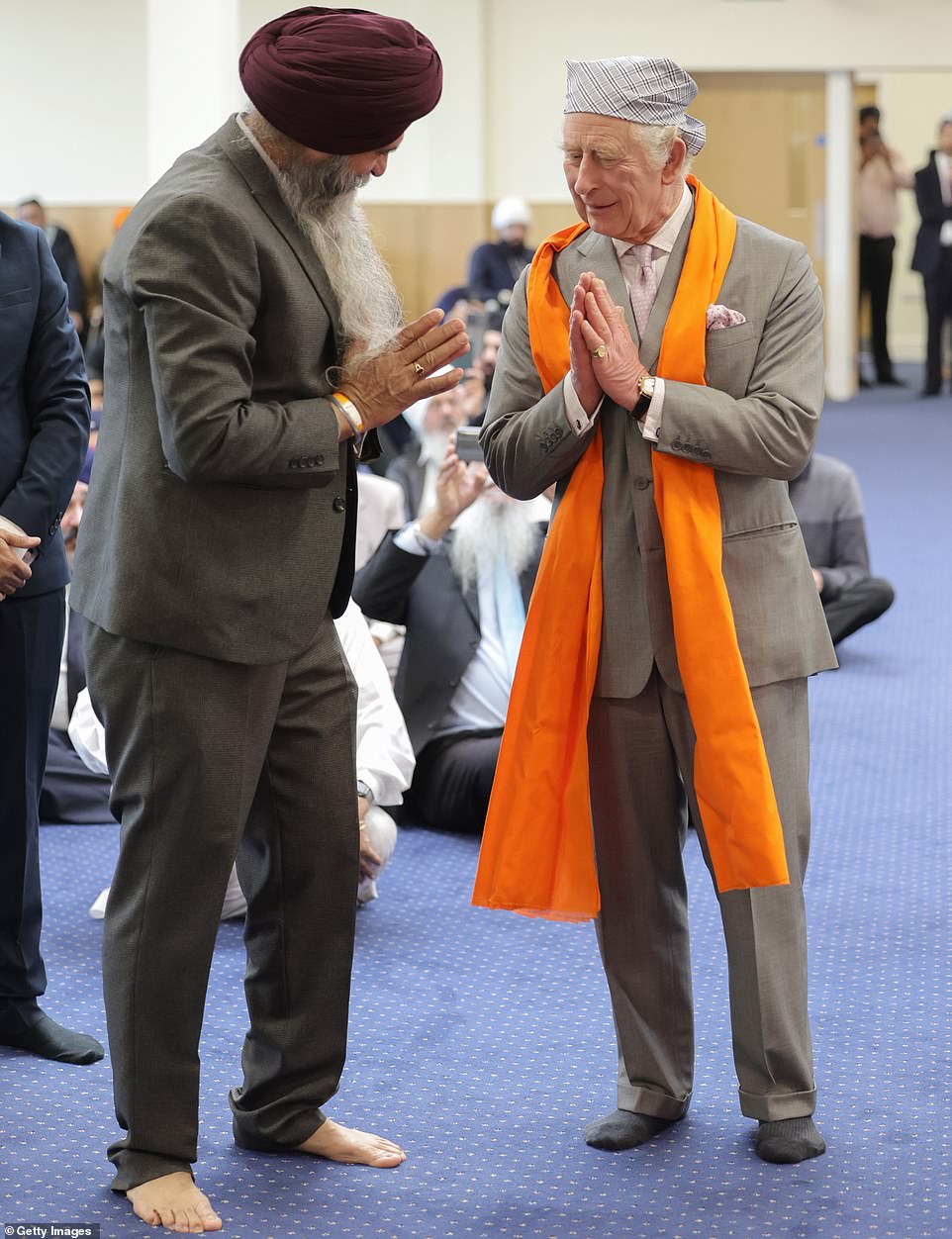 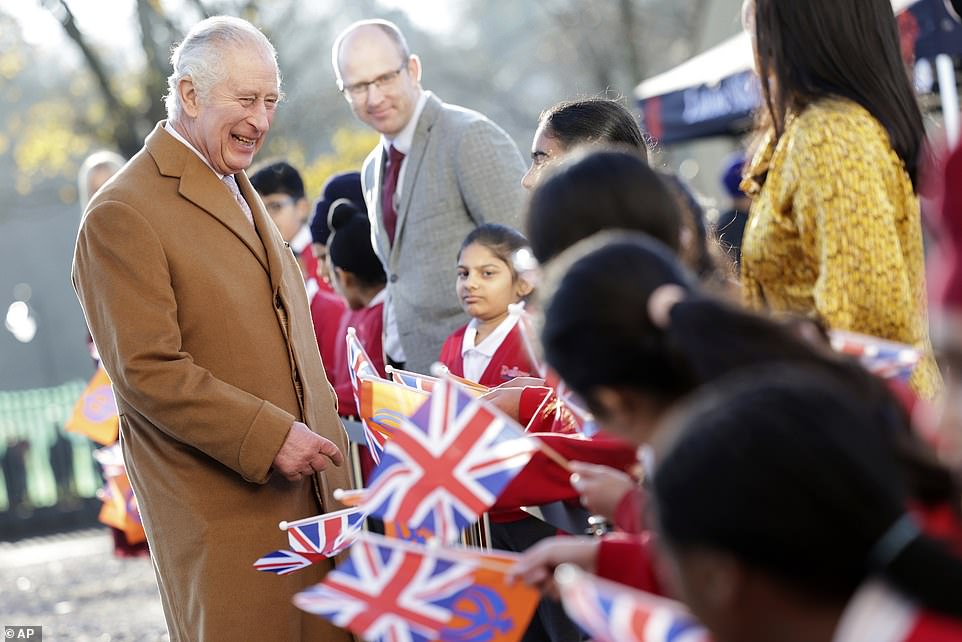 By Lucia Lamoury for MailOnline

King Charles will devote a significant portion of his Christmas Day speech to his late mother the Queen, a royal expert has claimed.

This year families will gather round to watch King Charles III deliver his first broadcast as sovereign following on from his mother, the late Queen, who delivered 69 Christmas speeches during her reign.

Jeremy Archer, the author of A Royal Christmas, told OK! magazine: ‘He’ll talk about how positive she was and how inclusive she was. It will be solemn and reflective, but it will show gratitude for her reign, her life and all the things she’s achieved.’

And he predicted that the King will devote as significant chunk of his speech to the tribute saying he’ll ‘spend as much time talking about his mother as he does about everything else’.

Last year, the Queen paid a moving tribute to her husband Prince Philip in her Christmas Day speech.

He was also give Luton-made honey by council chief executive Robin Porter.

Charles has made several previous visits to the town, including in 1985 when he opened a new terminal at Luton Airport.

Before leaving for his next engagement, he met children from St Matthew’s Primary School.

His visit came a day after a one-minute teaser for the six-part Netflix series Harry & Meghan was released on Monday.

In it the duke discusses the ‘pain and suffering’ of women marrying into the royal family.

Netflix confirmed volume one will launch on December 8 – exactly three months after the death of Harry’s grandmother, Queen Elizabeth II – with the second volume to be released on December 15.

The trailer opens with Harry saying: ‘It’s really hard to look back on it now and go ‘What on earth happened?”

As videos play of the couple receiving rapturous applause while carrying out royal duties as well as announcing their engagement and their wedding in 2018, a news clip voiceover by Piers Morgan says: ‘She’s becoming a royal rock star.’

It cuts to Meghan saying ‘and then…’ before snapping her fingers, with Harry adding: ‘Everything changed.’

A photo of the royal family at Trooping the Colour in 2019 is shown while Harry continues his narration, saying: ‘There’s a hierarchy of the family, you know, there’s leaking, but there’s also planting of stories. It’s a dirty game.’

Meanwhile, this morning, Kensington Palace announced that Charles and the Queen Consort are to attend the Princess of Wales’s Christmas carol service on December 15. 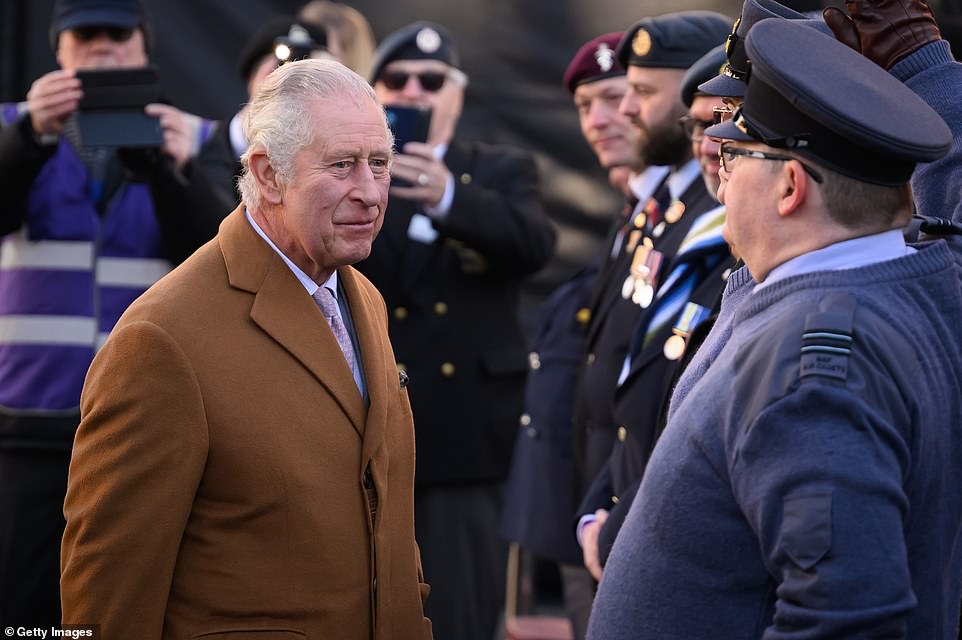 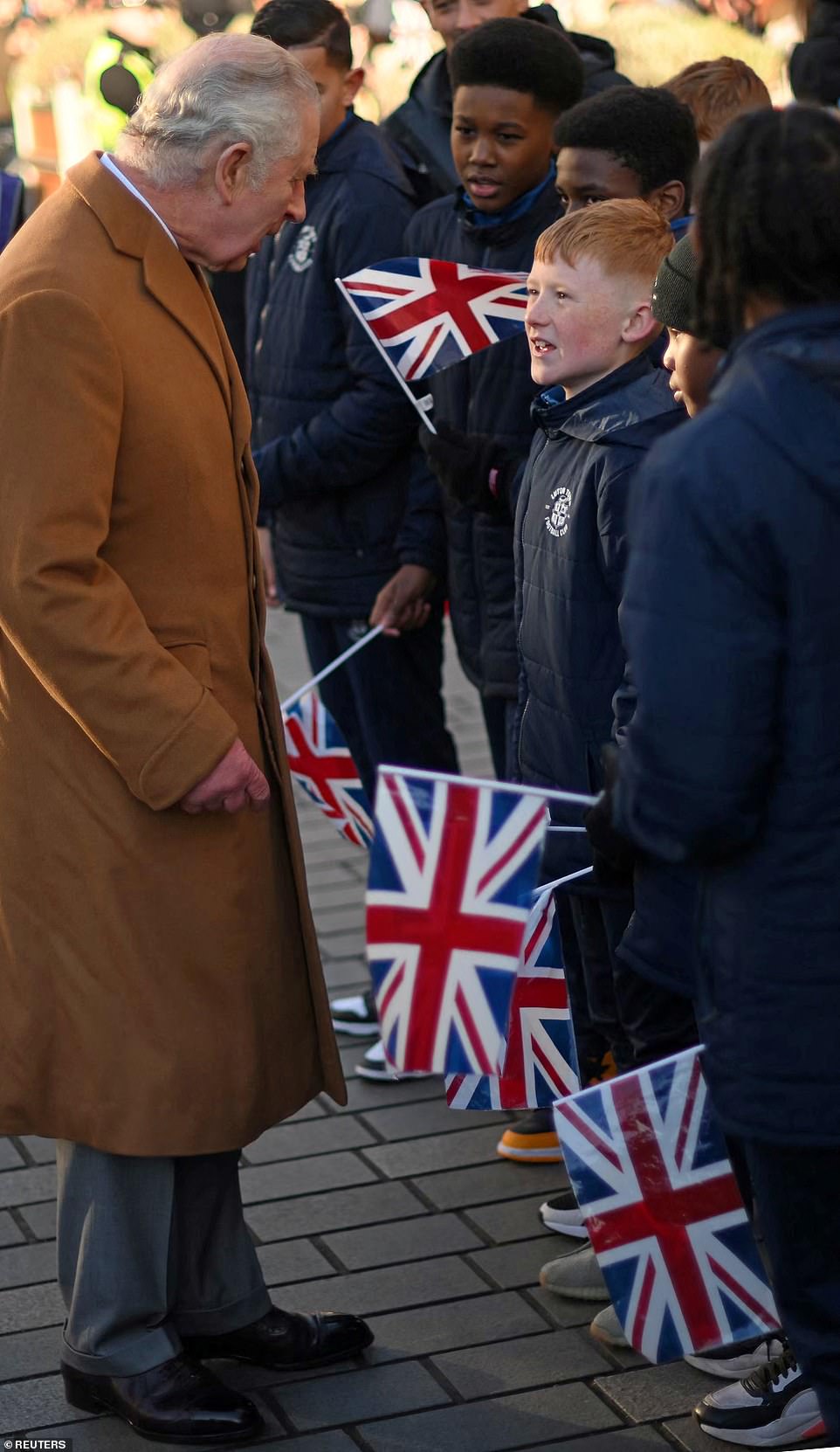 The King, Camilla, Kate and the Prince of Wales will gather with other members of the royal family for the Together At Christmas service at Westminster Abbey.

The show of family unity will come on the day the final three episodes of Harry and Meghan’s docuseries drop on Netflix.

The Royal Family has faced similar protests before.

Eggs were thrown at the late Queen’s car in 2002 when she visited Nottingham, while Charles was also targeted during a 1995 walkabout in Dublin.

Blank cartridges, eggs and even a ROSE: Previous times when Charles, the Queen and Prince Philip came under fire in the line of duty

King Charles being targeted with eggs is not the first time that senior royals have come under fire in public.

Both Charles and his late mother the Queen have been shot at with blanks in the past, whilst Her Majesty also had eggs thrown at her during a visit to New Zealand with Prince Philip in 1986.

Charles was targeted in a less concerning way in 2001, when a protester slapped him across the face with a red rose.

The Queen was riding down The Mall during a Trooping the Colour parade in 1981 when 17-year-old Marcus Sarjeant fired blank shots at her.

He was tackled by a soldier and the police before being arrested and charged.

Although the Queen had to calm her horse, named Burmese, she continued with the cremony.

Sarjeant was later jailed for five years under the 1842 Treason Act.

The last person to be convicted of a similar offence was Nazi collaborator William Joyce during the Second World War. 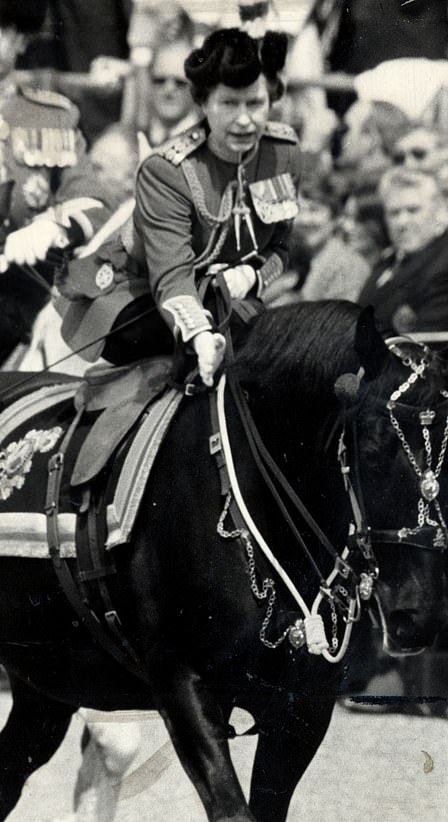 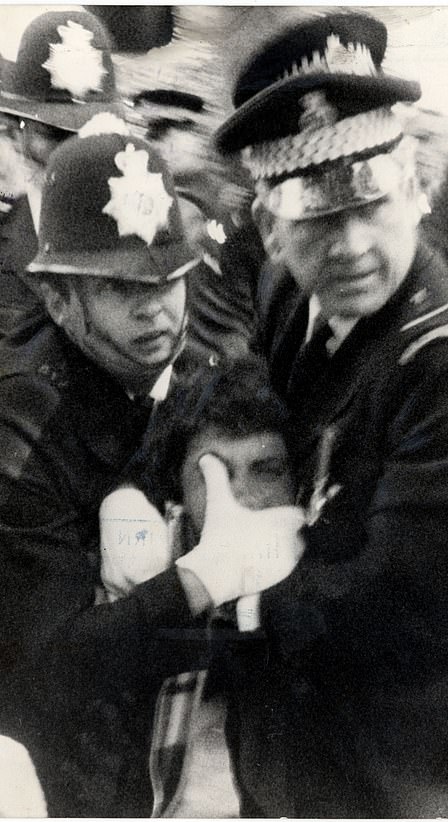 The Queen was riding down The Mall during a Trooping the Colour parade in 1981 when 17-year-old Marcus Sarjeant fired blank shots at her. He was tackled by a soldier and the police before being arrested and charged

1986: The Queen and Prince Philip targeted with eggs in New Zealand

The Queen and Prince Philip were visiting New Zealand for the seventh time in 1986 when they were targeted with eggs while riding in an open top car.

The car was travelling through Auckland’s Ellerslie Racecourse as 42,000 school children watched on.

After the eggs had been thrown, the Queen was seen brushing away any residue before she nodded in reply when Philip asked her if she was ok. 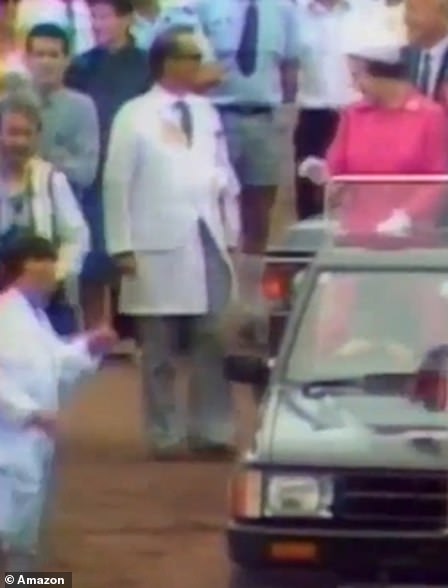 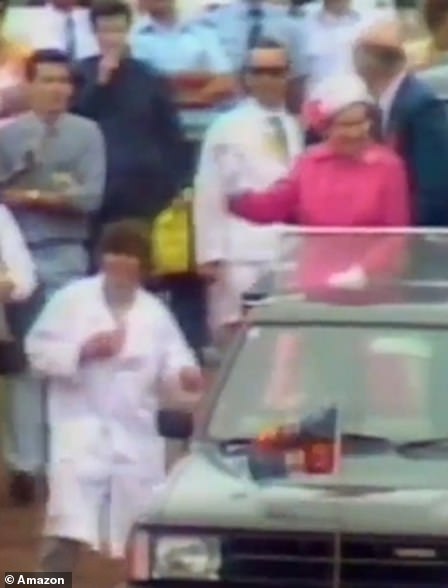 The Queen and Prince Philip were visiting New Zealand for the seventh time in 1986 when they were targeted with eggs while riding in an open top car. The car was travelling through Auckland’s Ellerslie Racecourse as 42,000 school children watched on

Two women wearing white coats were then bundled away by police.

Her Majesty later made light of the incident in a joke at that evening’s banquet, saying: ‘Of course New Zealand has long been renowned for its dairy produce.

‘Though I should say, that I myself prefer my New Zealand eggs for breakfast.’

When the then Prince Charles was on a visit to Sydney in 1994, 23-year-old student David Kang fired a shot at him from a starting pistol.

Charles had been making a speech at the time, to mark Australia Day.

Kang, who went on to become a barrister, later said that he carried out the stunt to highlight the plight of Cambodian asylum seekers being held in detention camps in Australia.

He was bundled to the ground and arrested before being found guilty of threatening unlawful violence and sentenced to 500 hours of community service. 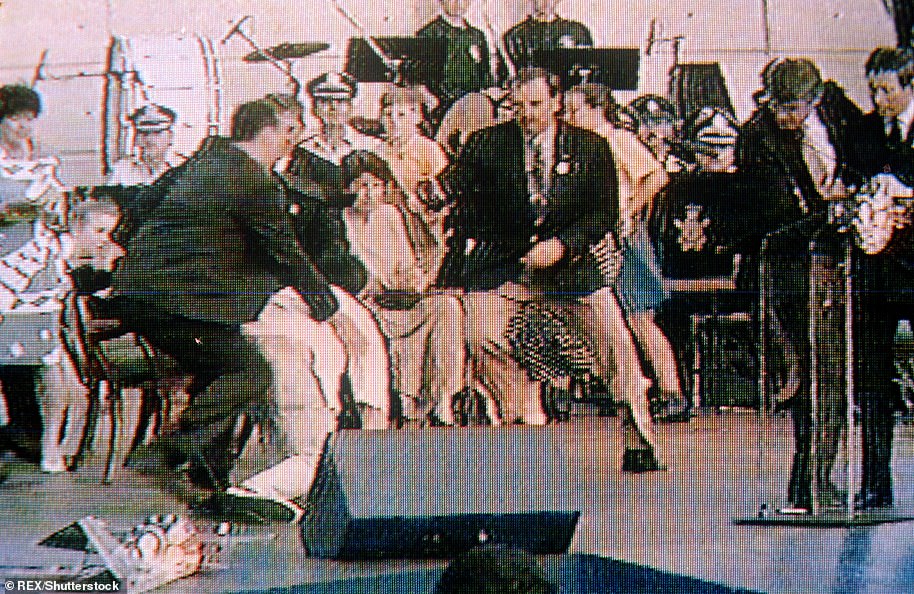 When the then Prince Charles was on a visit to Sydney in 1994, 23-year-old student David Kang fired a shot at him from a starting pistol

2001: Latvian schoolgirl slaps Charles across the face with a rose

When Prince Charles was on a visit to Latvia in 2001, he was targeted by schoolgirl Alina Lebedyver, who was then 16.

She used a rose to slap him around the face and later said she performed the stunt to protest against the war in Afghanistan.

Lebedyver also told reporters that Britain was ‘the enemy of the world’.

She was charged with endangering the life of a foreign dignitary and faced up to 15 years in prison.

Charles made a plea for leniency and the charges were downgraded, eventually to the point where she was put under her mother’s supervision for a year. 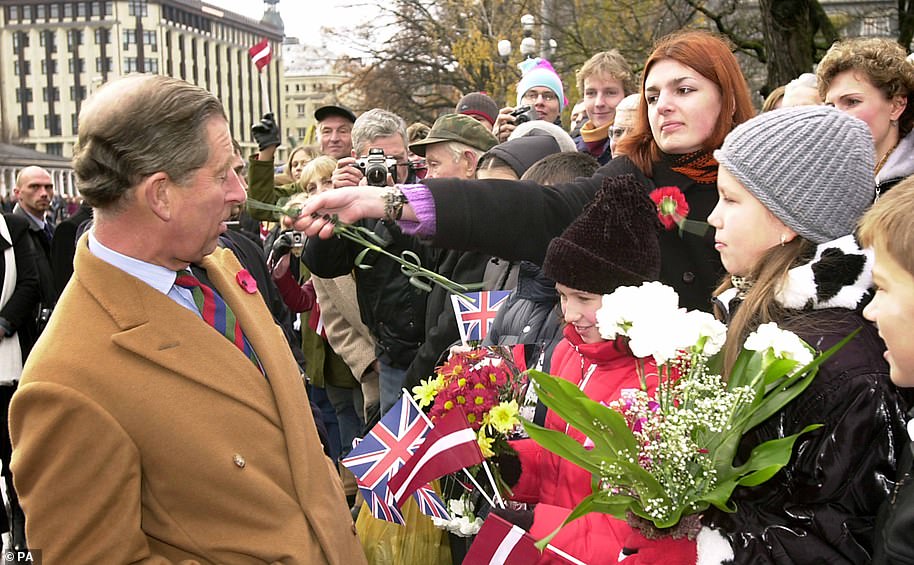 When Prince Charles was on a visit to Latvia in 2001, he was targeted by schoolgirl Alina Lebedyver, who was then 16. She used a rose to slap him around the face and later said she performed the stunt to protest against the war in Afghanistan