By Chiara Fiorillo For Mailonline and Ap

Egypt has restricted sales of yellow vests amid fears they will be used to copy French rioters during the upcoming anniversary of the country’s 2011 uprising.

The revolution took place between January and February 2011 and toppled autocrat Hosni Mubarak.

Officials and retailers said dealers have been instructed not to sell yellow vests to walk-in buyers and to restrict sales to verified companies, only after securing police permission.

The yellow vests worn by French protesters have become the symbol of the wave of demonstrations that began in November against a rise in fuel taxes in France.

Demonstrators wearing yellow vests protest at the toll gates of a motorway, in Biarritz, France. Egypt has restricted sales of the safety vests amid fears they could be used during the upcoming anniversary marking the country’s 2011 uprising

According to officials in Egypt, dealers were told offenders would be punished.

Six retailers in a Cairo downtown area where industrial safety stores are concentrated said they were no longer selling yellow vests.

Two retailers declined to sell them, giving no explanation, but the remaining four told The Associated Press they could not sell them as they were instructed to do so by the police.

Two retailers spoke anonymously to AP for fear of reprisals.

One said: ‘They seem not to want anyone to do what they are doing in France.’

‘The police came here a few days back and told us to stop selling them. When we asked why, they said they were acting on instructions,’ said the other. 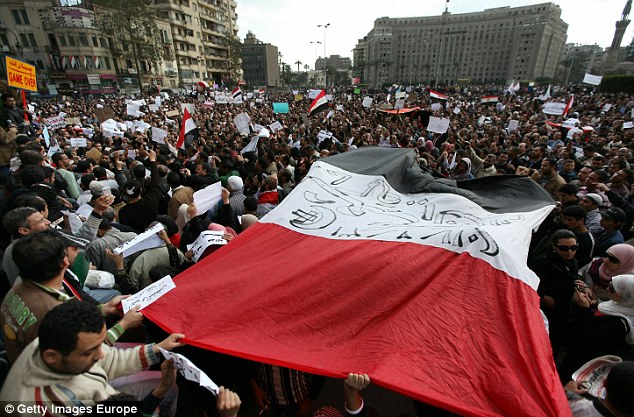 Protesters carry a large Egyptian flag through Tahrir Square in Cairo on January 31, 2011

Security officials said the restrictions would remain in force till the end of January.

They said industrial safety product importers and wholesale merchants were invited to a meeting with senior police officers in Cairo this week and were informed about the new rules.

Also the officials spoke on condition of anonymity because they are not authorised to brief the media.

Repeated calls and messages from AP to the spokesman of the Interior Ministry, which oversees the police, to seek comment went unanswered. Over the past two years, Egyptian authorities have deployed police and soldiers across the country, to prevent any marches to commemorate the anniversary of the start of the 2011 uprising on January 25.

President Abdel-Fattah el-Sisi recently denounced for the first time the 2011 uprising, saying it plunged the country into economic and political turmoil.

He often warns that it is necessary to ensure stability in the country, pointing to war and destruction in Syria, Yemen and Libya as the alternative.

Since el-Sisi became president in 2014, there have been no significant protests. 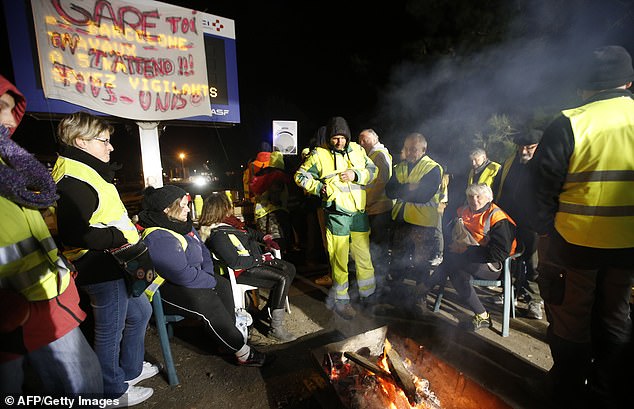 Rights lawyer Gamal Eid said his Cairo-based Arab Network for Human Rights Information has seen a recent spike in small ‘social protests,’ with the privatisation of state-owned enterprises as the main issue.

Eid said: ‘The government here is talking up its achievements, but it fears a backlash because ordinary people have yet to tangibly benefit from the mega projects underway.’

He was elected in 2014 and, earlier this year, he won a second-term.