Experts from Egypt’s Ministry of Antiquities revealed on Saturday a range of recently discovered animal mummies.

They are showcasing the find of two lion cubs, several crocodiles, along with birds and cats at the Step Pyramid of Djoser in Saqqara, south of Cairo.

Mummies and a variety of artifacts have been uncovered at the site.

Latest finds: Newly-discovered animal mummies along with an extensive collection of 75 wooden and bronze statues of cats, are on show at the Step Pyramid of Djoser in Saqqara 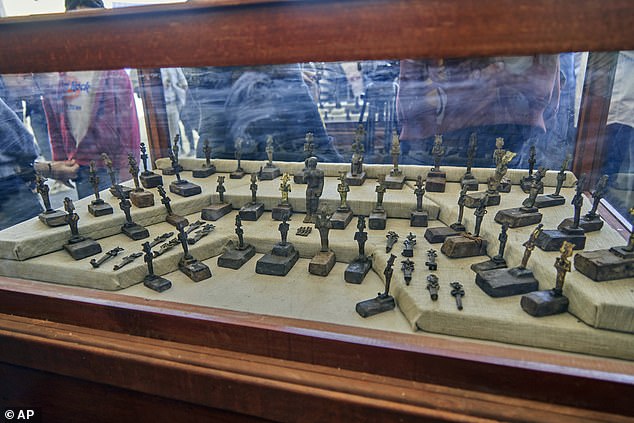 Makeshift exhibition: Visitors are being given the chance to look at the mummies and other artifacts found in a vast necropolis 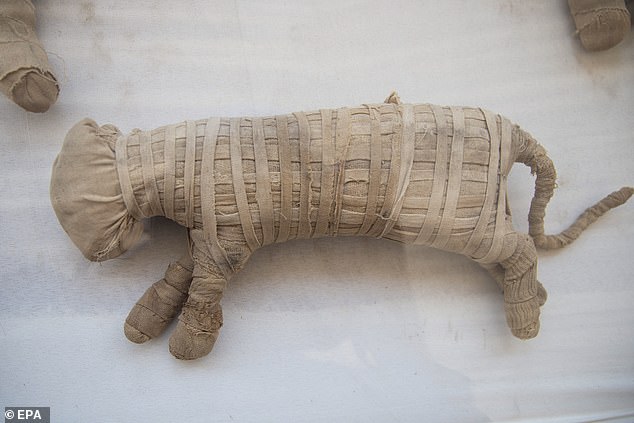 Mummified: Lion cubs and cats are among the remains to be discovered by the team of experts

‘All of them are very interesting from the Egyptological point of view to know better this area.’

Mostafa Waziri, secretary general of the Supreme Council of Antiquities, revealed to reporters local archaeologists had uncovered a cache that includes hundreds of mummified animals, birds and crocodiles.

He said among the items discovered were two lion cubs but radar scans were needed on three others to determine that mummies were also lions.

Mummified cats are regularly found by archaeologists but finding a lion is rare.

Back in 2004 experts made that find as the first lion skeleton was found in Saqqara, revealing the sacred status of the animal in ancient times. 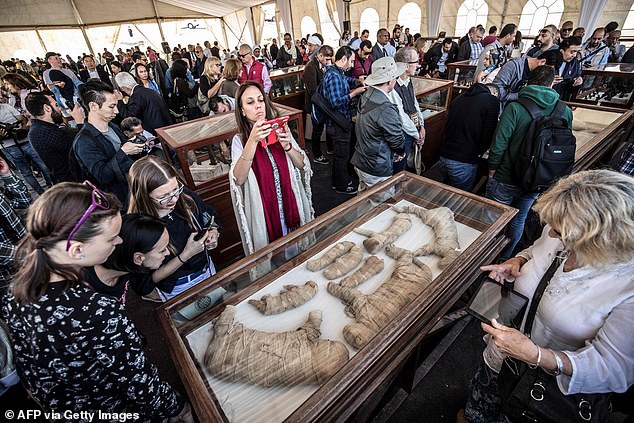 Major draw: Scores of visitors look over the finds made by the archaeological team in Giza’s Saqqara necropolis 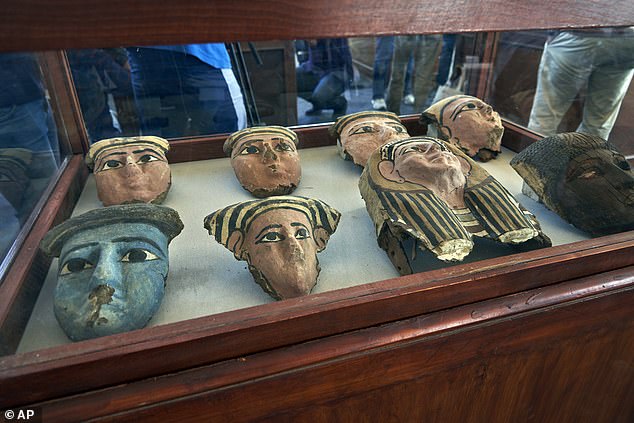 On display: Wooden and clay mummies masks are being showcased following the latest find 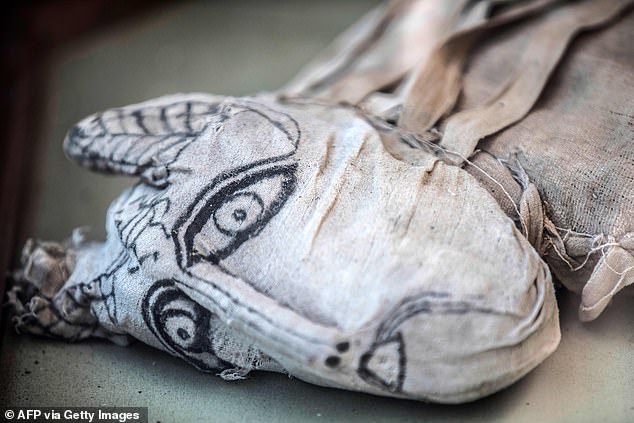 Discovery: A cache of 75 wooden and bronze statues and five lion cub mummies decorated with hieroglyphics have been found at the Saqqara

Wooden and bronze cat statues, which represents the ancient goddess Bastet and a rare large stone scarab, which Waziri hailed as ‘the largest all over the world’  were uncovered.

Two mummies of ichneumon, or the Egyptian mongoose, wrapped in linen bandages and wooden and tin-glazed statuettes of the goddess Sekhmet, represented as a woman with the head of a lioness, have also gone on show.

Strips of papyrus with depictions of the goddess Taweret depicted as a hippopotamus with the tail of a crocodile were also found. 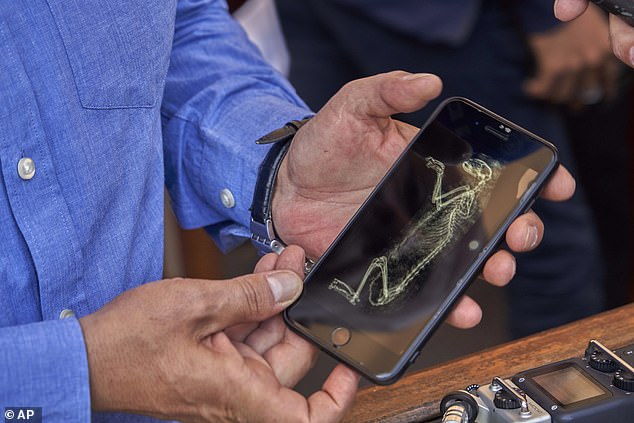 Rare find: CT-scan revealed mummies for 95 per cent belong to lion cubs due to the shape and size of the mummies bones 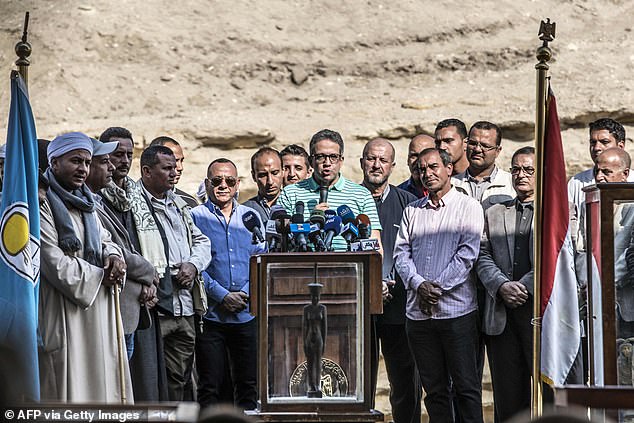 Exciting discovery: Egypt’s Antiquities Minister Khaled el-Enany, flanked by the Secretary General of the Supreme Council of Antiquities Mostafa Waziri announces a new discovery carried out by an Egyptian archaeological team in Giza 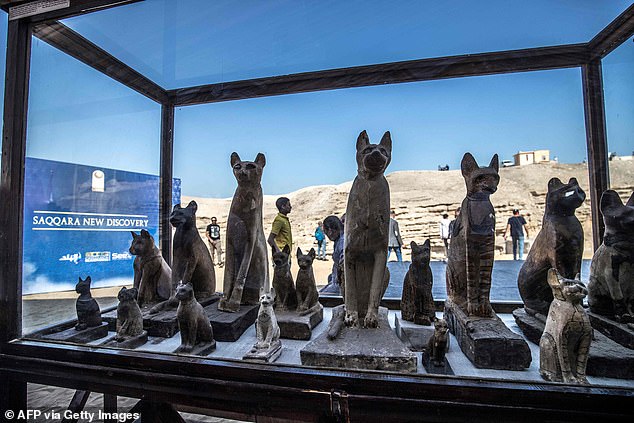 Well-preserved: The items uncovered include mummified cats, cobras and crocodiles 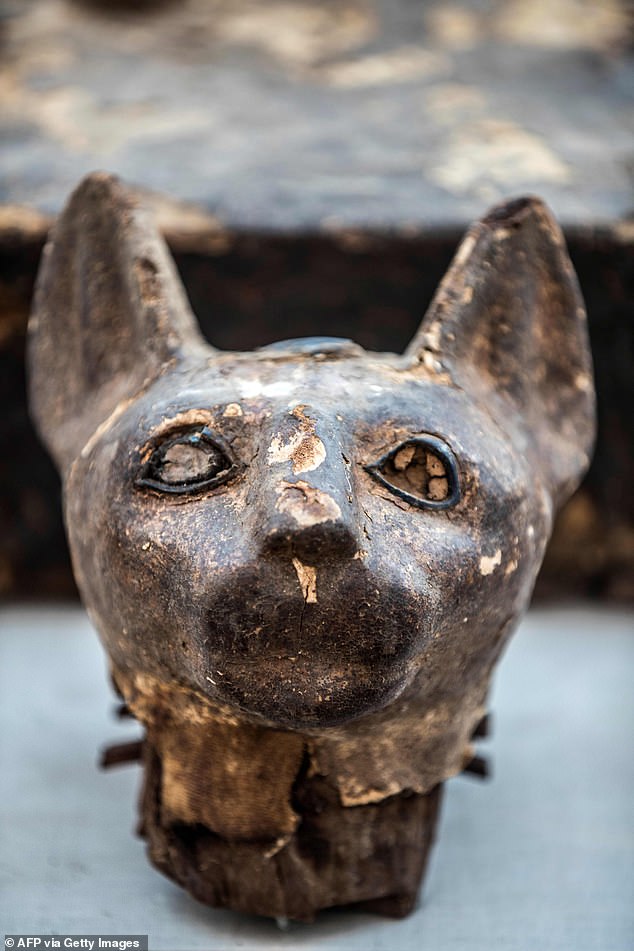 New find: A cat’s head was among the items discovered in the key haul in Egypt

Markings on the displayed artifacts show that they date back to the Late Period (664-332 B.C.).

It is hoped the latest find in Saqqara will help boost the country’s tourism industry, which has been hampered by the turmoil in the wake of the 2011 uprising which led to the fall of Egypt’s longtime leader Hosni Mubarak.