In Eight Go Rallying: The Road To Saigon, a clutch of celebs compete in classic cars – and Noel Edmonds races to turn into Alan Partridge

Eight Go Rallying: The Road To Saigon features eight minor celebrities driving classic cars from Thailand through Cambodia to Vietnam, although by the close of the second day it had become Two Go Rallying, Two Go By Taxi And Four Go By Minibus. 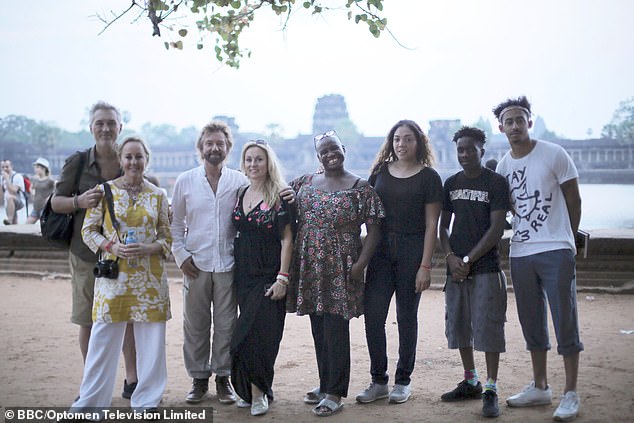 Only Noel Edmonds and his wife Liz were still properly in the game, but Noel did have a singular advantage as he wears driving gloves. Alan Partridge always recommended the string-backed ones – ‘just gives you a little bit of extra purchase’ – but Edmonds opted for leather, closed back with those little openings over the knuckles. So there any similarity ends. ‘We must remember,’ Edmonds told his wife at one point, ‘that this isn’t a race. It’s an experience. Which we have to win.’ And that wouldn’t have put you in mind of Partridge at all.

Much of the pre-publicity for this show had, in fact, come from Edmonds, who lambasted it for ‘fakery’ and not being a ‘proper competition’ – or a proper experience you have to win, if you prefer – but he stopped at throwing down a glove and challenging the BBC to a duel. Guess they’re not cheap, those gloves. Hard to fathom where Edmonds was coming from, given that the programme showed all the behind-the-scenes trickery, and all the low-loaders and taxis and minibuses and five-star hotels.

Supposedly, the group were meant to be joining a famous classic-car rally, but as was also made clear from the start, they weren’t actually allowed to take part in the main event and would be competing for their own ‘rally spirit’ cup. Edmonds has spent many years in television – as he said himself, he has quite a ‘track record’ working in ‘the highly competitive world of broadcasting’ – and some may say that, as a consequence, he knows how to draw attention to a show.

I can say only that he did not complain when he saw that he and Liz would be driving a pretty little classic MG with a 1900cc engine, whereas the musicians Tinchy Stryder and Jordan Stephens were awarded a Hillman Imp (900cc). He did not complain that this would surely put him at an advantage… on top of the driving gloves too!

Meanwhile, the other celebrity duos involved in this four-parter are Martin and Shirlie Kemp driving a ’72 Mini, plus TV presenter Miquita Oliver and her mother Andi in a ’59 Morris Minor. And it’s surprisingly hardcore. They started out in Chiang Mai, which is where Edmonds first snapped on his driving gloves – ‘I’m the only one with the proper gloves!’ he said, with astonishment – and where they had to negotiate the traffic-choked city using only rudimentary maps.

This led to a lot of circling, U-turning and bickering, while I hoped and prayed they wouldn’t knock over that moped with the baby on the back. (It did feel phenomenally dangerous.)

Next, they had to drive up Thailand’s steepest mountain range, where the Hillman began to smoke. The car, the voiceover said, ‘needs topping up with petrol, oil and water, but as rally virgins the boys have no idea how much’. You did wonder: might someone not have told them? The Hillman’s engine eventually seized and the boys had to continue by minibus. The Morris Minor also couldn’t make the hill, so Miquita and mum had to retreat and drive around the mountain range, which added many extra hours to their journey, and in the end Andi was too tired to carry on at the wheel, so they had to be put in a taxi. Noel had no problems with the MG but then, as he said, ‘I know what to do with an old girl approaching 50. And the car.’ That also wouldn’t remind you of anyone at all.

On the second day, after Mr and Mrs Edmonds had performed their morning salutations – ‘Good morning, Mrs Edmonds, I love you.’ ‘Good morning, hubby. I love you too.’ – they were all told they’d be taking part in an off-road time trial, which also seemed phenomenally dangerous, and was. The Kemps rolled their Mini, and Martin ended up in hospital but Shirlie simply said ‘it could have been worse’ and did not proceed to lambast the BBC for nearly killing them, but then she has only ever been a Wham! backing singer and does not have a ‘track record’ working ‘in the highly competitive world of broadcasting’. The Mini was written off so they joined Tinchy and Jordan on the minibus, while Andi said she was now in too much shock to continue driving, which meant she and Miquita had to be put in a taxi again.

So to summarise: one pair nearly died, one pair had a car that was useless and one pair stopped due to shock, yet all the while Noel kept going and going and going without mishap. Must be the driving gloves. Has to be.