Escape from Birmingham! Men ditch their taxi on the gridlocked M5, climb 20ft up embankment, drag their luggage and golf clubs a mile across fields and MAKE their flight to Portugal for lads’ golfing holiday

Eight golfers trapped in traffic ditched their car, scaled a 20ft motorway embankment and dragged their luggage a mile across fields to make their flight.

Iain Milroy, 36, was heading to Birmingham Airport for golfing break in Vilamoura, Portugal, when he and his friends hit queues on the M5 northbound.

After waiting more than an hour for traffic to clear, the account manager Iain from Bromsgrove, Worcestershire, and his companions took matters into their own hands.

They abandoned their taxi driver in the jam, ran across standstill traffic and lugged their cases and golf clubs to the airport in 35 minutes. 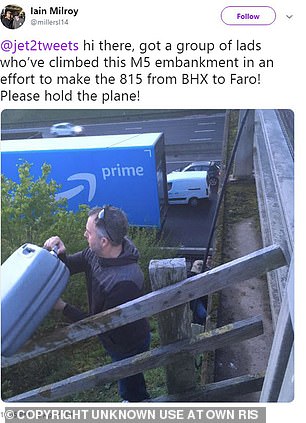 Mr Milroy (left, with his friends) even sent a tweet begging the operator not to let the plane leave without him and his friends after they scaled a motorway embankment 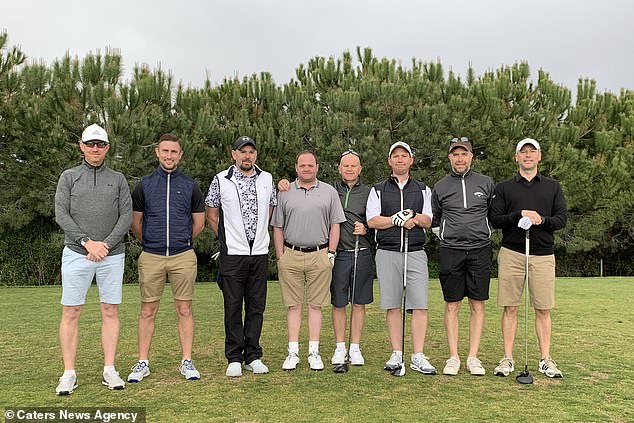 While they scrambled to get to the airport in time they even tweeted Jet2 begging them not to take off before their arrival.

The friends made the 8.15am Jet2 flight with 40 minutes to spare before the plane left the runway and were able to enjoy their holiday without a hitch.

Mr Milroy said: ‘It was a bizarre few hours, but throughout it all we thought about the tragic accident.

‘Jet2 were really helpful – we tweeted them saying “please hold the plane” and we were greeted at check-in.’

He and his seven friends went on to enjoy five days golfing in the Algarve. A spokesperson for Jet2 said: ‘We are delighted that Iain and his group made the flight and we hope they had a lovely holiday in Faro.

‘Our team of dedicated customer helpers are always on hand to help, and this fantastic customer service is why Jet2.com has just scooped five awards in the 2019 TripAdvisor Travellers’ Choice awards for airlines.’