A German technology company has built a robotic spider that looks like the stuff of nightmares.

Called the BionicWheelBot, the robo-spider is outfitted with eight terrifyingly spindly legs that allow it to walk, run and transform into a rolling wheel that can chase after you at alarming speeds.

Scientists from Festo modeled the somersaulting robot after the real-life flic-flac spider, which is known for its unusual movements.

The robo-spider is outfitted with eight terrifyingly spindly legs that allow it to walk, run and transform into a rolling wheel that can chase after you at alarming speeds

The flic-flac spider is found in the Moroccan desert and can walk like other spiders.

But it also has the eye-popping ability to propel itself into the air by rolling and cartwheeling through the air, usually as a means of deterring predators.

Festo’s BionicWheelBot is designed to move just like the flic-flac spider.

In order to start rolling, the BionicWheelBot bends six legs — three on each side — to make a wheel.

Then, two legs extend, so that the robot can move itself forward even while rolling.

The firm says the robo-spider is twice as fast in rolling mode than it is when walking.

So in other words, it’s liable to catch up to you if you try to run away. 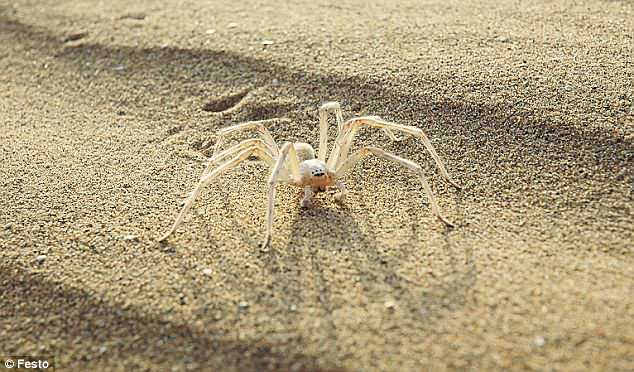 Scientists from Festo modeled the somersaulting robot after the real-life flic-flac spider (pictured), which is known for its unusual ability to somersault and cartwheel in the air

The key to making the robot move fast are the two legs it uses to propel itself forward.

‘This prevents the BionicWheelBot from grinding to a halt and ensures that it can move itself forward even on rough terrain,’ Festo explained.

It can also navigate rocky, uneven terrains and climb inclines that are up to 5% uphill.

The BionicWheelBot is controlled by 15 small motors, which are located in the knee joints and body.

Festo said there are also 14 automatic-locking worm gear units that make sure the sure only has to use energy when moving its legs. 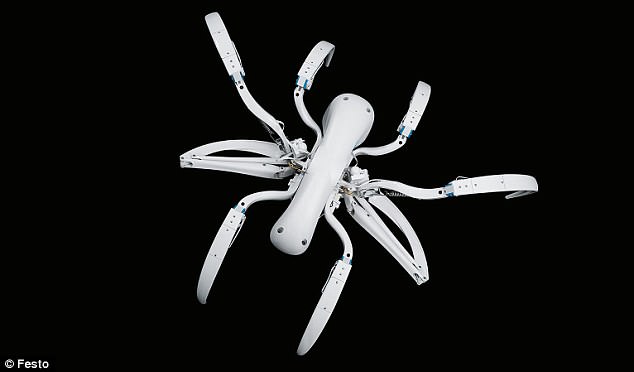 The robot is controlled by 15 small motors in the knee joints and body. It also has 14 automatic-locking worm gear units that make sure it only uses energy when moving its legs

The Moroccan flic-flac spider, also known as Cebrennus rechenbergi, was discovered in the Erg Chebbi desert in 2015.

The agile arachnid uses a somersaulting motion to escape from predators.

The spider first assumes a threatening posture to make itself appear as big as possible, but if the danger persists, the spider runs and, about half the time, cartwheels. 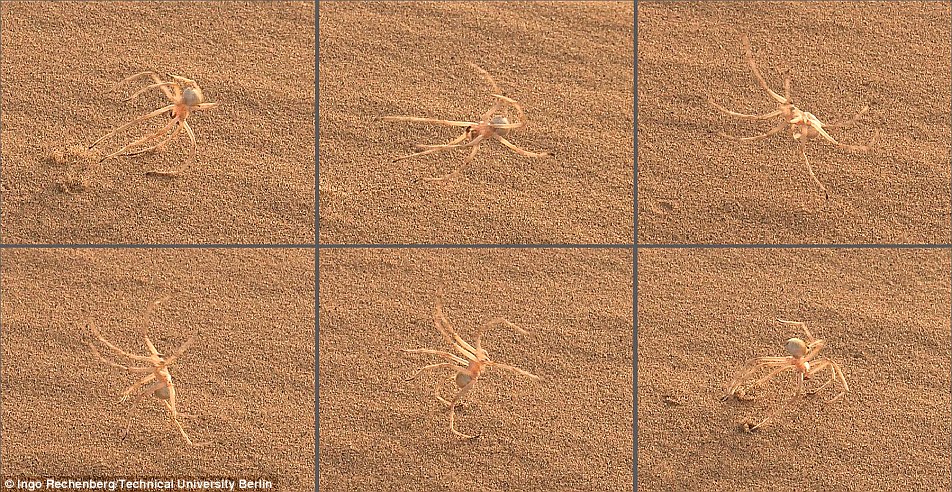 The Moroccan flic-flac spider hurls itself up and down hills in a cartwheel, as shown in the sequence of images above, as a last ditch resort to help it escape from predators. It can travel twice as fast when spinning than it can when running on its legs normally

Scientists found that the spider could cartwheel about twice as fast as it could run. Terrain is also not a challenge – the spider can spin across flat ground as well as up and down hills.

Rather than attempting to cartwheel away, the spider propels itself toward the source of the threat, perhaps invoking the theory that the best defense is a good offense.

In the barren sand dunes where the spider lives, running away can prove pointless because there is no place to hide.

It’s unclear whether Festo plans to sell the BionicWheelBot in the future.

The firm has built a virtual army of animal-inspired robots, ranging from butterflies, jellyfish, penguin kangaroo and dragonfly, among others.

This week, Festo also unveiled a BionicFlyingFox, which is modeled after the massive fruit bats that share the same name.

The BionicFlyingFox has a wingspan of 228cm, is 87cm long and weighs just 580g.

Its light and simple design allows it to move aerodynamically and agilely through the air, just like the real-life animal.

Also like the real flying fox, Festo added an elastic membrane to the robo-bat that mirrors the flying mammals’ wings. 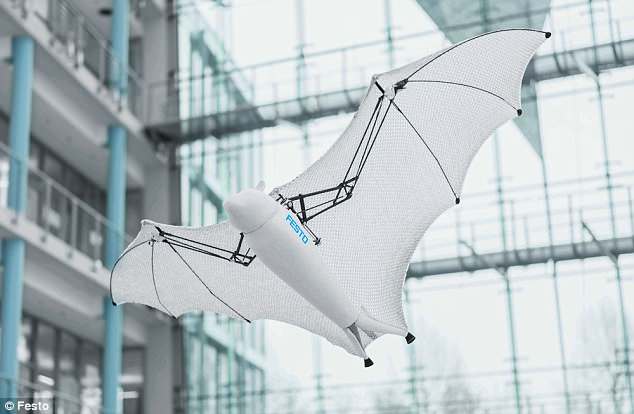 Festo also unveiled the BionicFlyingFox (pictured). The robo-bat is able to move semi-autonomously, communicating with a motion-tracking system 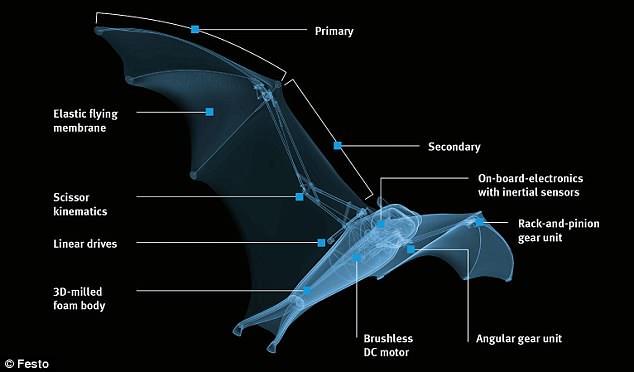 The BionicFlyingFox is modeled after the massive fruit bats that share the same name. Festo added an elastic membrane to the robo-bat that mirrors the flying mammals’ wings

‘The model’s flying membrane is wafer-thin, ultralight whilst also robust,’ the firm explained.

‘Due to its elasticity, it stays almost uncreased, even when the wings are retracted.’

Interestingly, the BionicFlying Fox is also able to move semi-autonomously, communicating with a motion-tracking system.

The system plans the flight paths and delivers the necessary control commands, the firm added.

Humans control the takeoff and landing process, while the tracking system takes over during flight.

It uses an adaptive drive system to thrust itself in directions of rotation and craters for ‘dynamic flying behavior in all spatial direction.

To get from one place to another, FreeMotionHandling uses and indoor tracking system of 10 infrared cameras.

These cameras gather information about the sphere’s location by taking 160 frames per second, which is sent back to a master computer that analyses 3.7 billion pixels per second.’

There are two cameras involved in detecting the object: one is located on the gripper and the other is on the outer sleeve.

The system can identify objects without a human operator, which is done by saving numerous images of different sizes, views and light conditions.

The gripper is designed based on chameleon’s tongue, which is basically a helium-filled film sleeve that wraps itself around objects up to 400g (.09 pounds).