Liana Villasin was killed by a pit bull at ther grandmother’s house. Her mother Brenda said: ‘She was my world’

An eight-month-old girl has been killed by a pitbull as she sat in a bouncy chair while being cared for by her grandmother.

Liana Villasin was dropped off by her mother Brenda at the grandmother’s house in Miramar, Florida, where she regularly spent time when not in daycare.

A male dog aged three or four years old, which had lived with the family since it was a puppy and was one of three in the house, attacked Liana in a bedroom.

Speaking outside her family home, Villasin told CBS Miami: ‘She was the best thing to ever happen to me. She smiled every morning. She was my world.’

Villasin said when she was told what happened, she raced along I-95 form her job in Pompano Beach.

‘The child lives with me, I drop the baby off every morning so I can go work. We rotate between daycare and here,’ she said.

‘Nobody wakes up in the morning and says ‘you’re going to lose somebody you love. 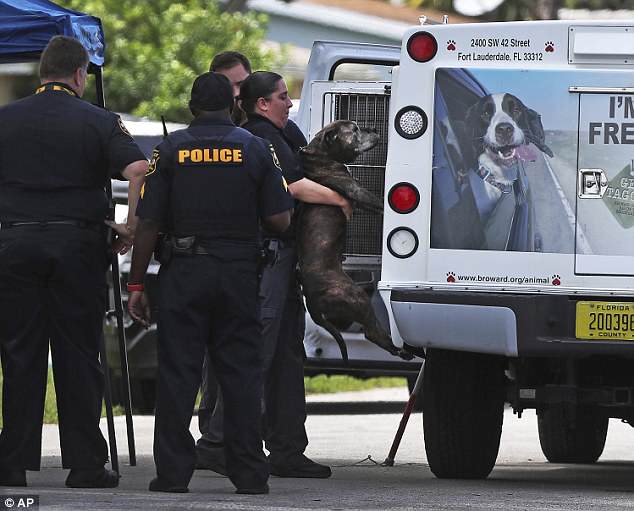 One of three dogs that lived in the property, is loaded into a Broward County Animal control truck after eight-month-old Liana Villasin was killed 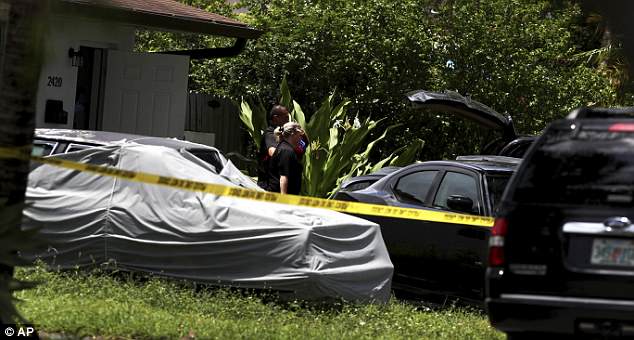 The dogs being loaded outside her grandmother’s home, where the attack occurred. She was caring for Liana while the girl’s mother was at work

‘It just happens so when I heard about it. I’m numb right now. I don’t feel. I can’t express myself correctly. My emotions are all over the place.’

The child’s grandmother had been watching her when the attack happened at around 11.30am on Wednesday investigators said.

‘The eight-month-old female baby was in the bedroom at the time of this horrific attack in a bouncy chair, inside a bedroom when this attack occurred,’ said Yesenia Diaz with the Miramar Police Department.

All three dogs were later pictured being loaded an animal services truck and taken away but it was not clear if the animal responsible would be put down.

An average of 33 people are killed each year in canine attacks in the United States, according to dogsbite.org, a victims’ advocacy that tracks dog attacks.

The site, which advocates for a pit bull ban, says 64 per cent of the attacks are committed by the breed.

In January, three-year-old girl has tragically died after she was mauled by a pit bull in Oklahoma.

As in the case in Florida, Rylee Marie was at home, being watched by her grandmother and she later died from her injuries.

The dog, named Remington, had been bought by her father from a friend just five days before the attack.