This is the horrifying moment eight people including a mother and her newborn baby were killed after a minibus was swept away by a flooded river in Lesotho.

The bus, which was carrying 15 people at the time, was trying to cross a flooded bridge in central Thaba Tseka district when it was pushed into the river.

Video shot by another driver captures the moment the bus is swept away, and the desperate struggle of passengers as they try to make it to the shore. 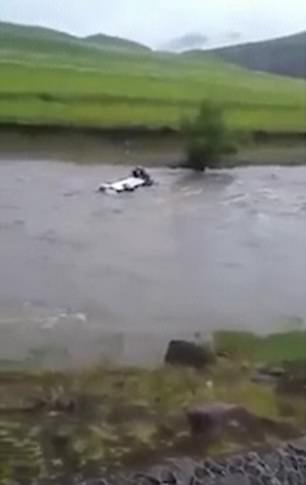 A taxi carrying 15 people in Lesotho attempted to cross a flooded bridge in heavy rain (left) before being swept away (right), killing eight people

Seven people, including the driver, managed to escape the vehicle and survived, but the other eight were killed.

Most of the bodies were discovered scattered downstream on Saturday, once the rains had eased.

Heavy rain and hail storms have brought chaos and dozens of deaths to Lesotho and parts of surrounding South Africa over the past week.

Another four workers were swept to their deaths in Lesotho after their lorry was caught in a flash flood amid a heavy rainstorm.

The South African capital Pretoria was left without power for a time last week after heavy rains damaged the electricity network. 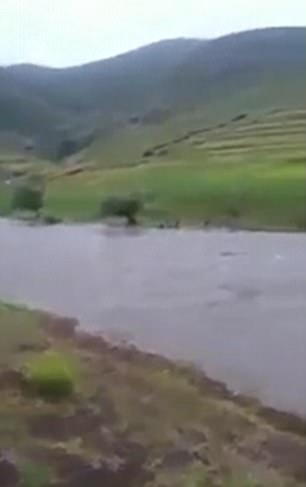 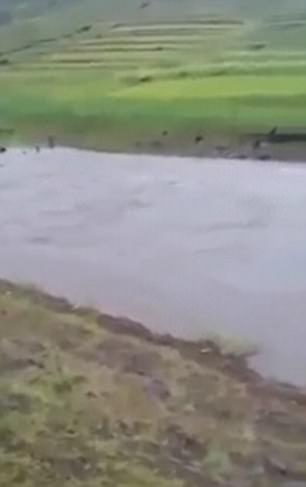 Video shows seven people, including the driver, scrambling on to the opposite bank (black dots pictured left and right). Eight others, including a mother and her newborn, were killed