A 21-year-old Georgia man who had publicly declared ‘a love for God and guns’ has been arrested in southwest Georgia, hours after eight people were killed in shootings at three Atlanta-area massage parlors.

The Crisp County Sheriff’s Office said it received information on the suspect’s car and spotted it driving along a highway whereupon police gave chase ultimately ramming the vehicle off the road.

The eight people were shot dead in three separate shootings at two spas and a massage parlor in and around Atlanta. 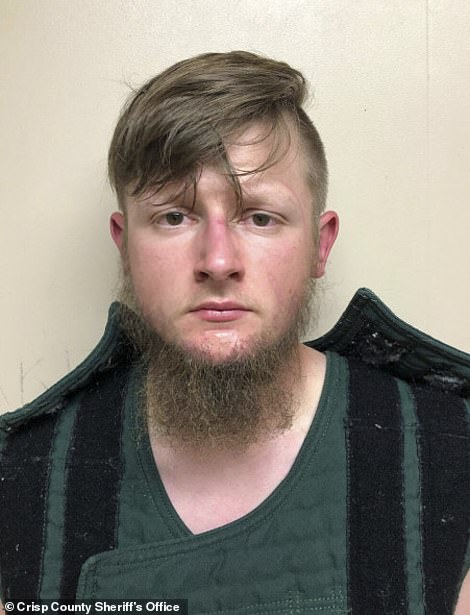 Robert Aaron Long, 21, of Woodstock, Georgia, was taken into custody in Crisp County on Tuesday night following a police car chase, about 150 miles south of Atlanta 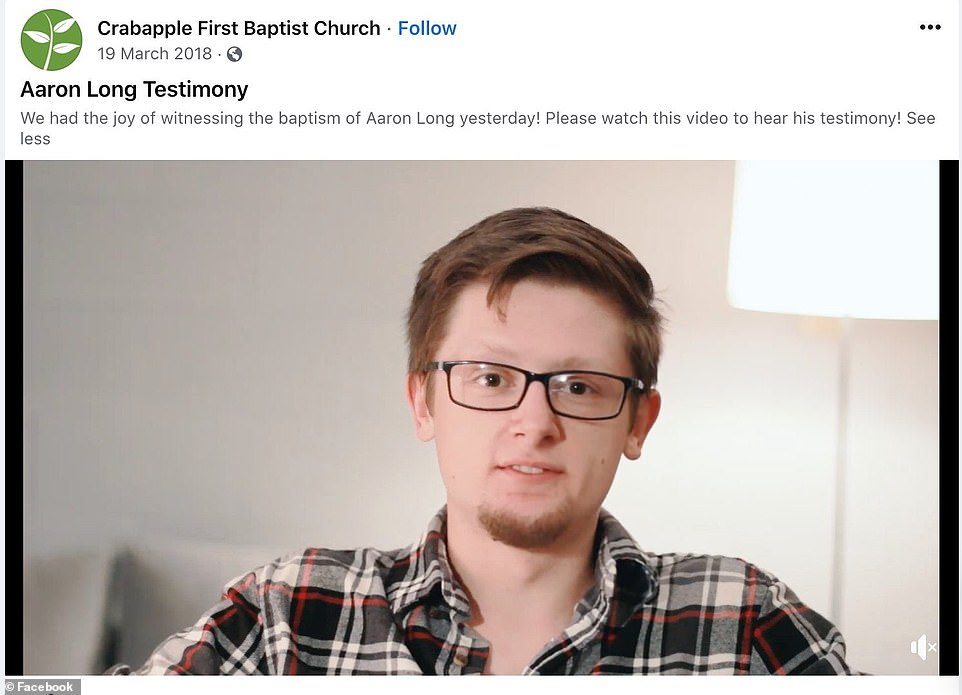 As more details emerged about the sequence of events that took place on Tuesday afternoon, more information came out about the suspect’s life.

‘Pizza, guns, drums, music, family, and God. This pretty much sums up my life. It’s a pretty good life,’ stated a tagline on an Instagram account believed to be Longs.

A student who he went to high school with in 2017 told the Daily Beast that he was keen on religion but never seemed violent.

‘He was very innocent seeming and wouldn’t even cuss. He was sorta nerdy and didn’t seem violent from what I remember. He was a hunter and his father was a youth minister or pastor. He was big into religion.’

A youth pastor at the Crabapple First Baptist Church confirmed he was the suspect in the shootings and that a statement would be forthcoming. 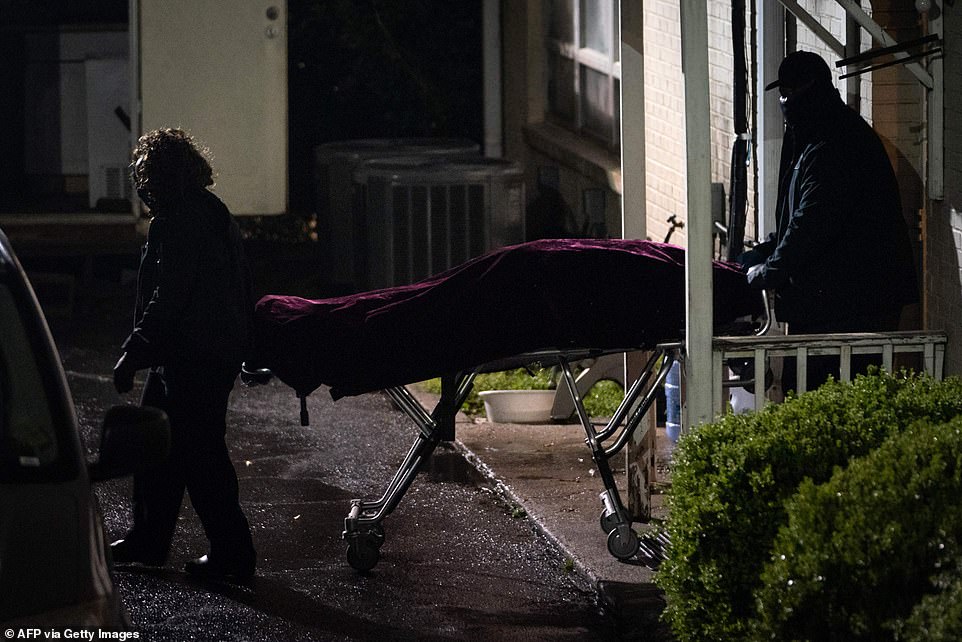 People with the medical examiner’s office wheel out a body on a stretcher from the Gold Spa massage parlor where three people were shot and killed on Tuesday in Atlanta, Georgia 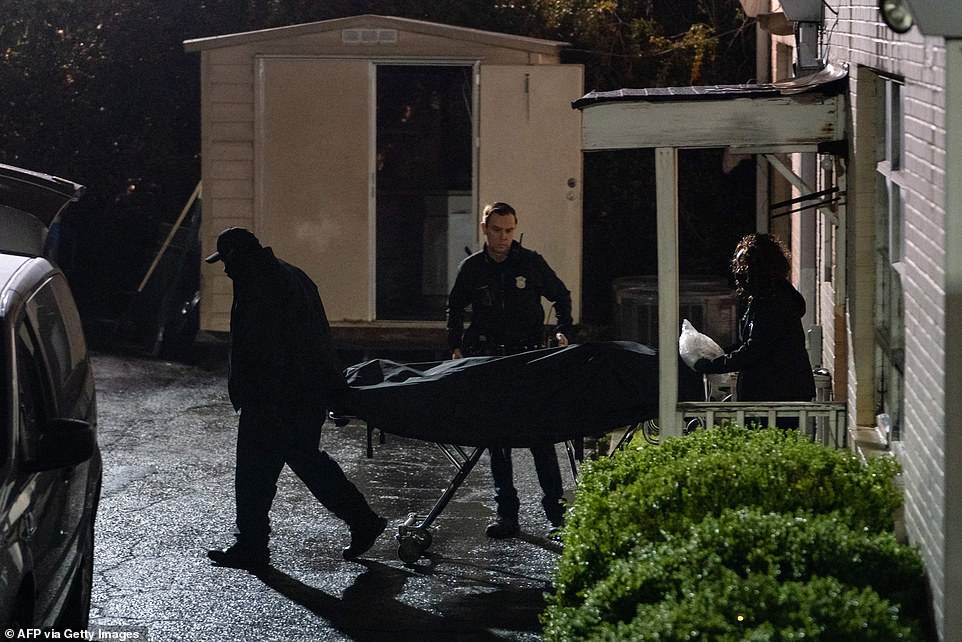 Bodies are wheeled out of Gold Spa in Atlanta where a man opened fire. Two other massage parlors were targeted 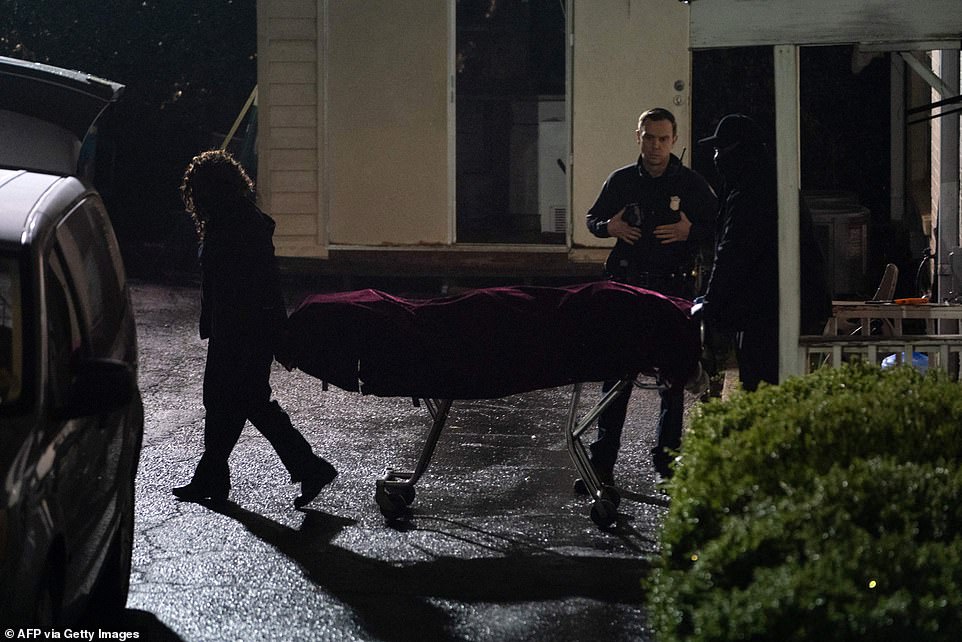 The shootings occurred on Tuesday afternoon around the Atlanta area. A body is seen being wheeled out of Gold Spa 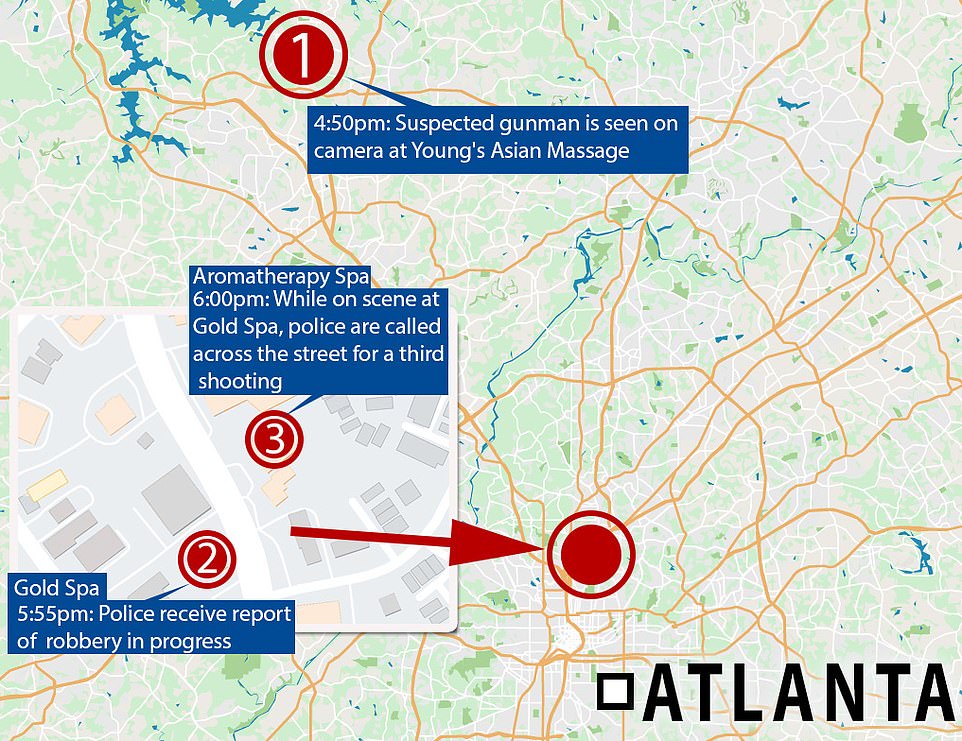 On Tuesday, Long found himself to be the prime suspect in the murders of seven women and one man.

First, two Asian women, one white woman and a white man were killed at Young’s Asian Massage north of the city, three Asian women were then gunned down at Gold Spa, before an Asian woman was shot dead at Aromatherapy Spa.

The first shooting happened just before 5pm at Young’s Asian Massage parlor off Bells Ferry Road and Highway 92 in Acworth, Georgia about 30 miles from Atlanta.

It appears that all five victims were shot inside the business.

Two of the victims died at the scene and three were transported to a hospital where two of them also died, Cherokee County Sheriff’s Office spokesman Jay Baker said.

The shopping center where Young’s Asian Massage is located was closed to the public as investigators search for ballistics, fingerprints and other evidence according to the Atlanta Journal Constitution.

The suspect was captured by surveillance video pulling up to the business around 4:50pm, just minutes before the shooting.

The sheriff’s office posted surveillance pictures on its Facebook page, asking people to share the images that show the man near the vehicle. 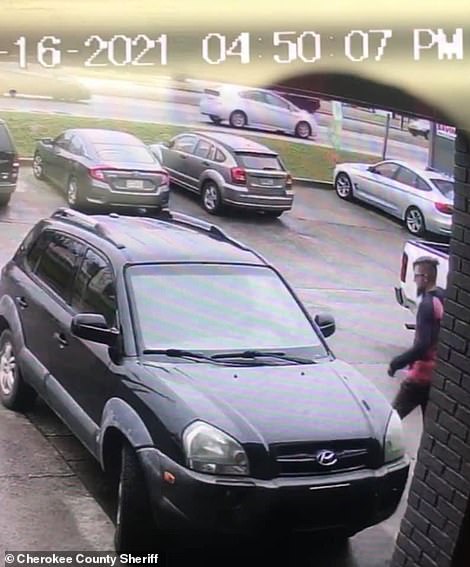 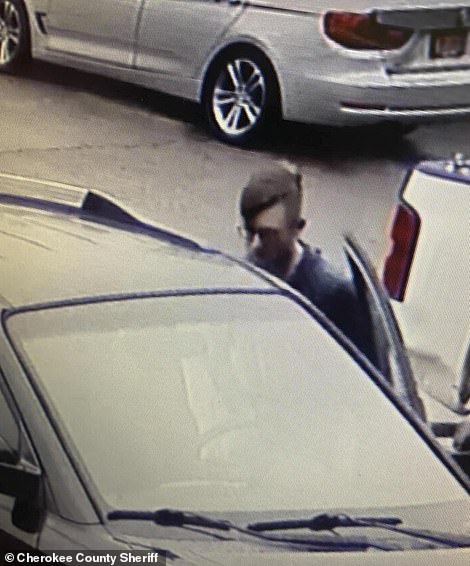 The suspect was captured by surveillance video pulling up to Young’s Asian Massage around 4:50pm, just minutes before the shooting 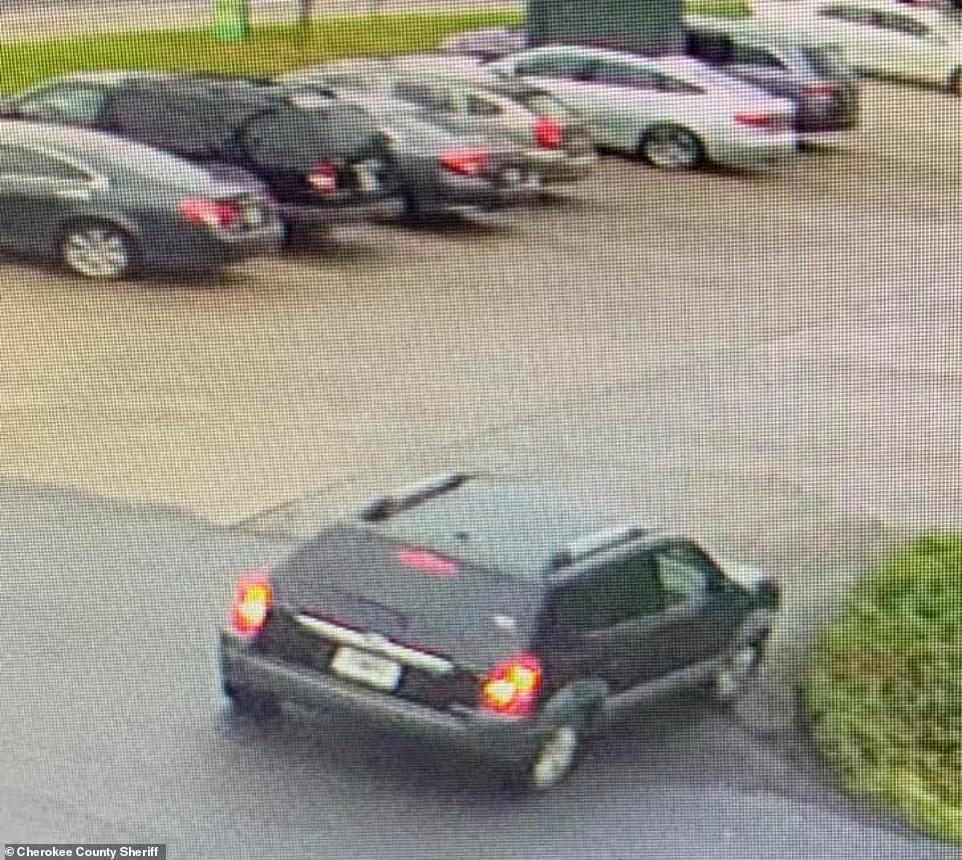 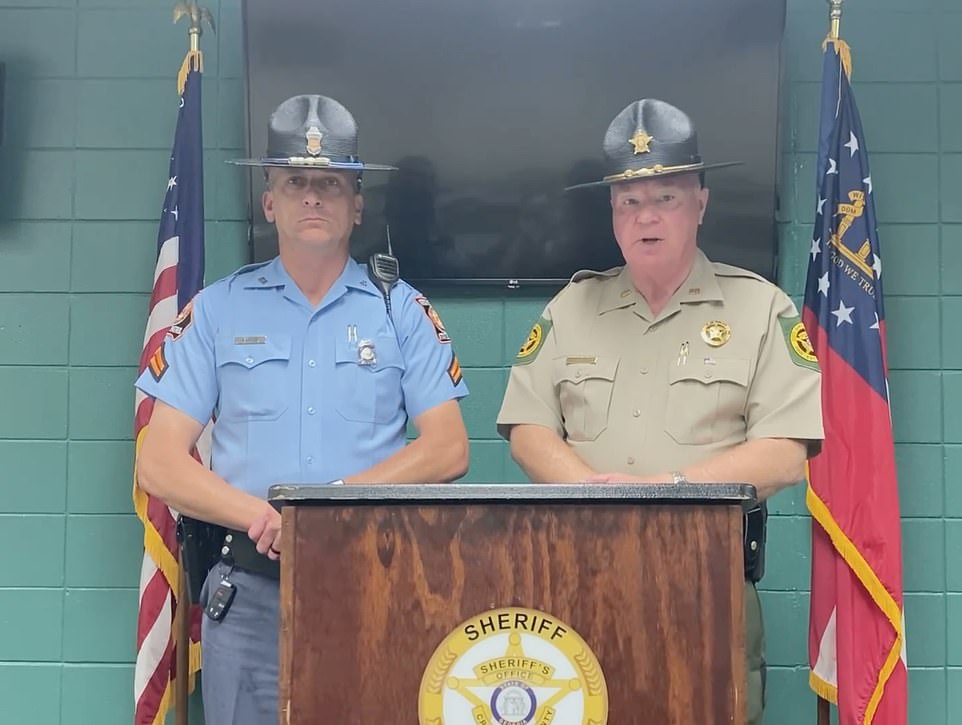 The Crisp County Sheriff’s Office, pictured, said it received information on the suspect’s car and spotted it driving along a highway whereupon police gave chase ultimately ramming the vehicle off the road. Sheriff Frank Reynolds is pictured, right

From there, it’s believed the gunman drove more than 30 miles and opened fire at two other businesses northeast of the city in the suburb of Woodland Hills.

He said all four victims were female, and ‘it appears that they may be Asian.’

The second set of shootings occurred less than an hour and fifteen minutes later, just before 6pm at Gold Spa.

Police were called to the location having been told that a robbery was taking place on the premises.

When police entered Gold Spa they found three women who had all been shot and subsequently died from their wounds. 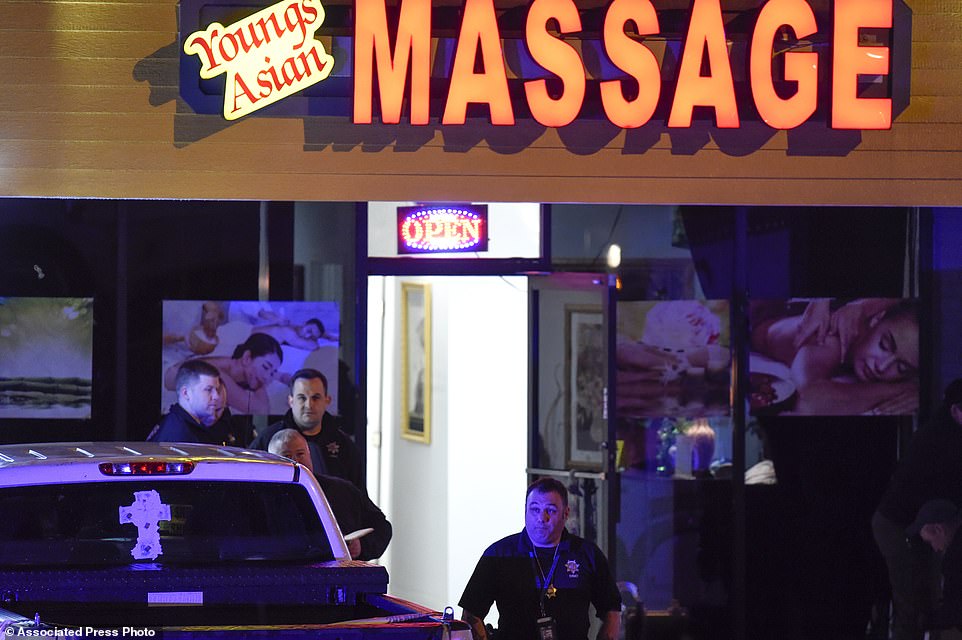 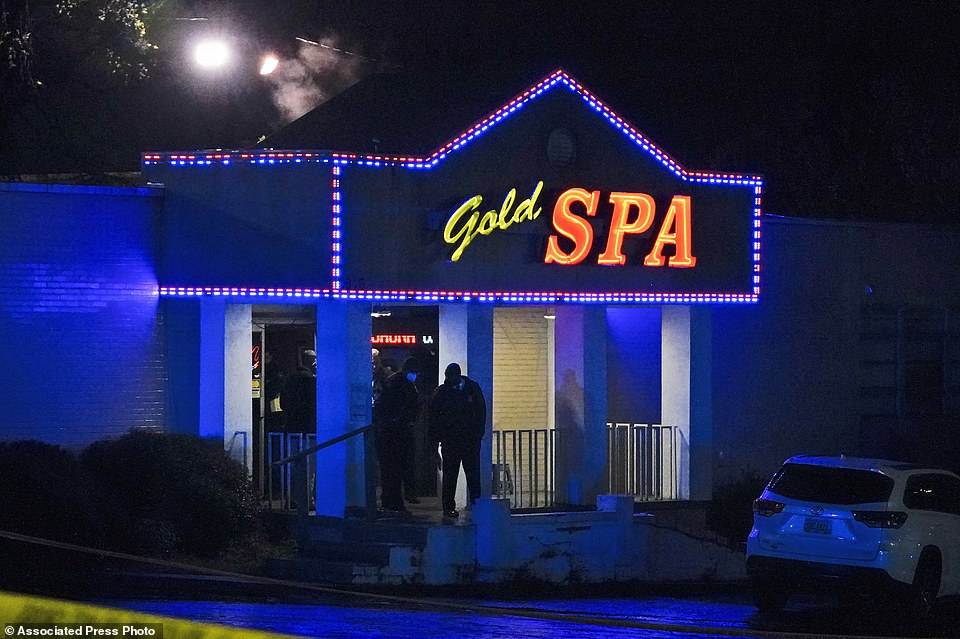 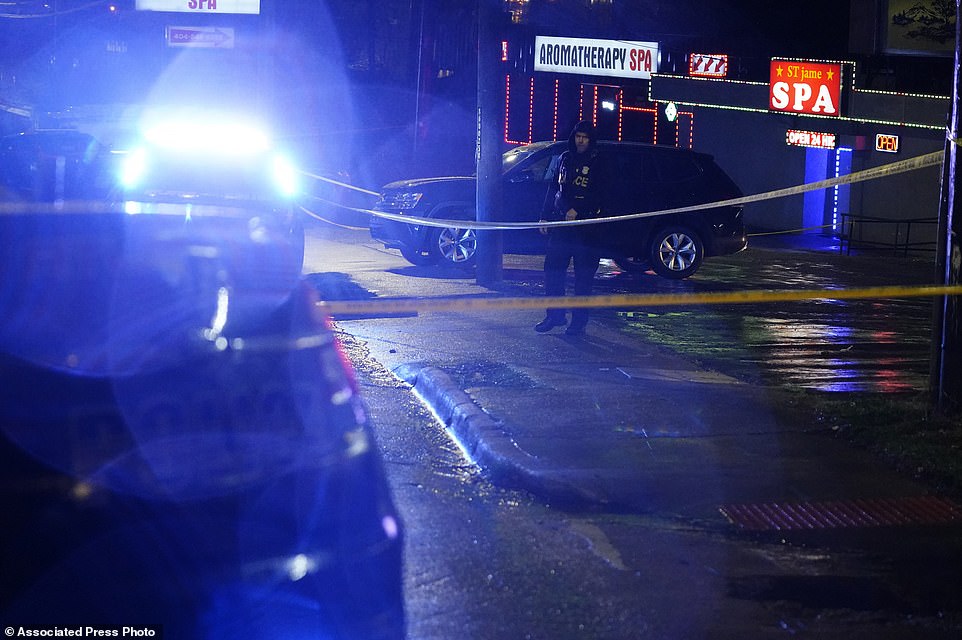 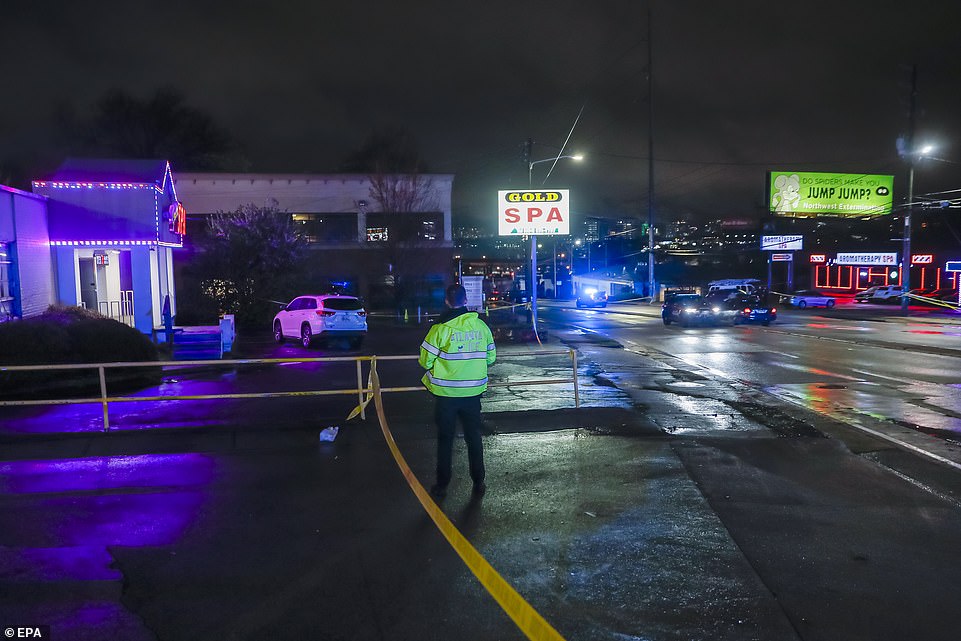 At least eight people were reported dead following a string of shootings at three metro Atlanta massage parlors. The proximity of Gold Spa and Aromatherapy Spa can be seen in this photo 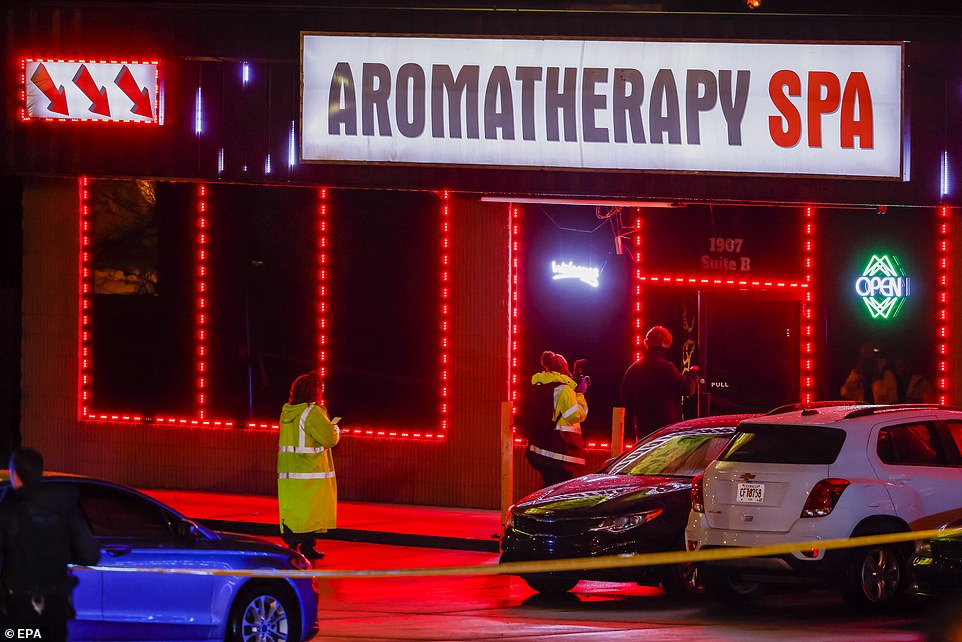 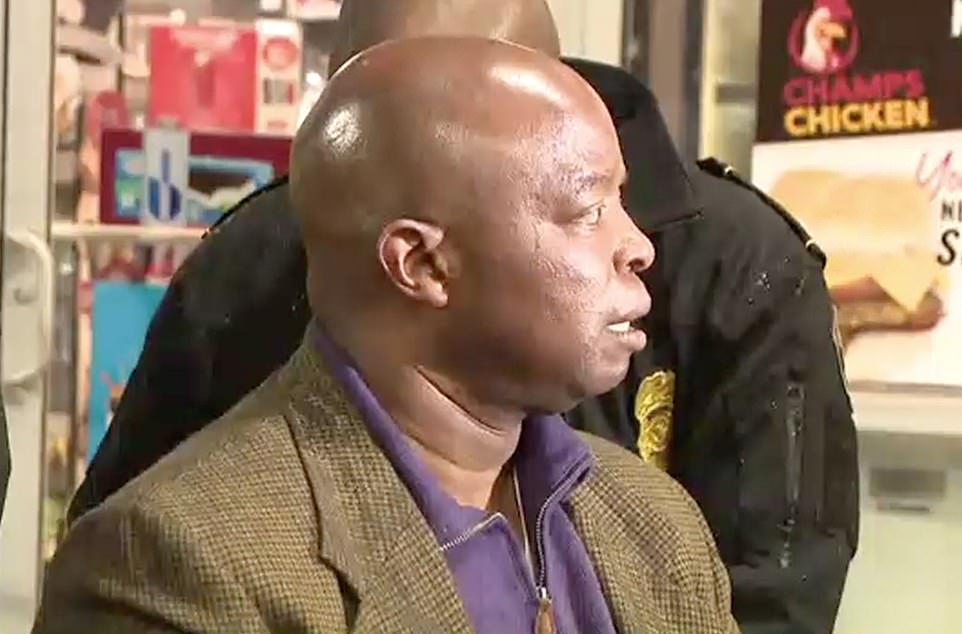 Atlanta Police Chief Rodney Bryant, pictured, said three people were killed at a spa in northeast Atlanta, while a fourth person was killed at another spa across the street. He said all four victims were female, and ‘It appears that they may be Asian.’

Cops then rushed to Aromatherapy Spa directly across the street.

Officers responded immediately, crossing Piedmont Road to find that one woman had also been shot and killed there as well.

The shootings took place at spas where a majority of the employees are Asian.

Hundreds of miles away in New York, the NYPD’s Critical Response Command was deployed to Asian communities throughout the city. The pandemic has seen a recent uptick in hate crimes towards Asian Americans.

On Tuesday evening in Atlanta, Piedmont Road was still completely shut down in both directions with heavy police activity in the area.

Officers could be seen with guns walking on the street outside both spas. Chief Bryant assured the public there was no immediate danger to the public.

Investigators are now gathering information from the scenes to determine the timeline of what occurred and the motive behind the shootings.

Law enforcement officials did not offer a motive for the shooting rampage and said they did not immediately know if the Asian women were targeted. Also killed in the Cherokee attacks were a white woman and a white man.

Police from all jurisdictions say they are ‘very confident’ that the same suspect was the gunman in all three shootings. 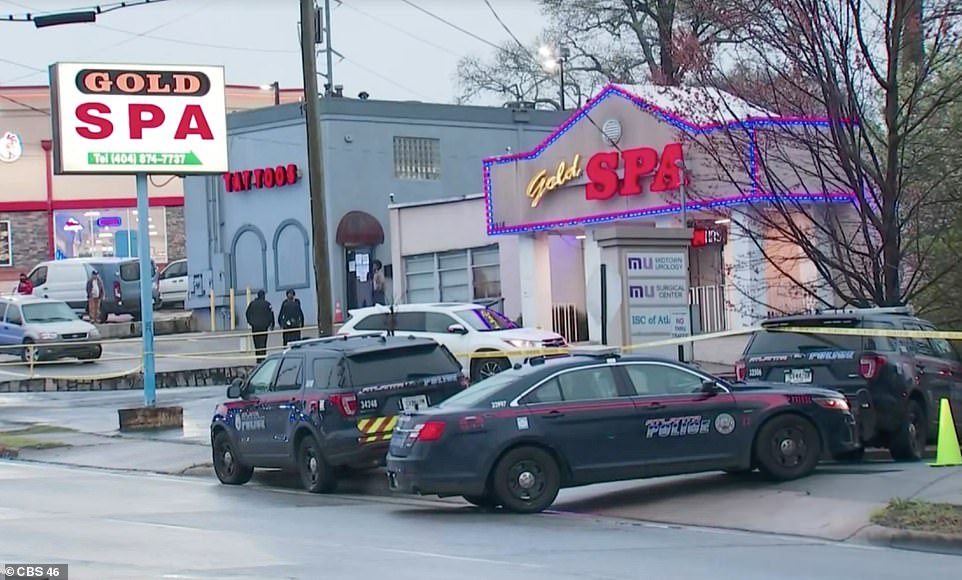 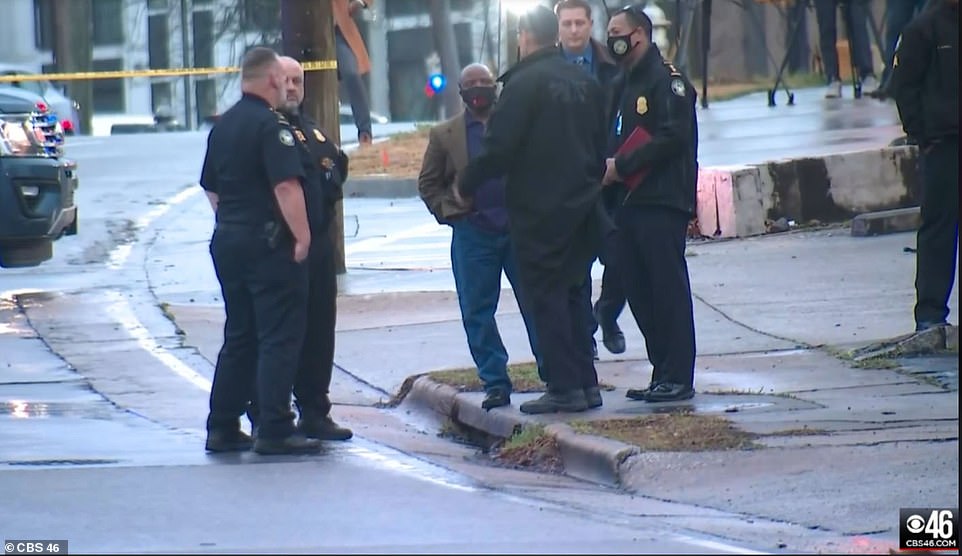 THE RISE OF ASIAN HATE CRIMES AMID THE PANDEMIC

Last week, President Joe Biden condemned what he called ‘vicious hate crimes’ committed against Asian Americans since the start of the coronavirus pandemic, calling such acts ‘un-American’ and demanding they stop.

‘Too often, we’ve turned against one another,’ Biden said in his first primetime address, detailing the progress made in the fight against Covid-19.

The Democratic president decried ‘vicious hate crimes against Asian Americans who have been attacked, harassed, blamed and scapegoated’ over the pandemic, which originated in China. 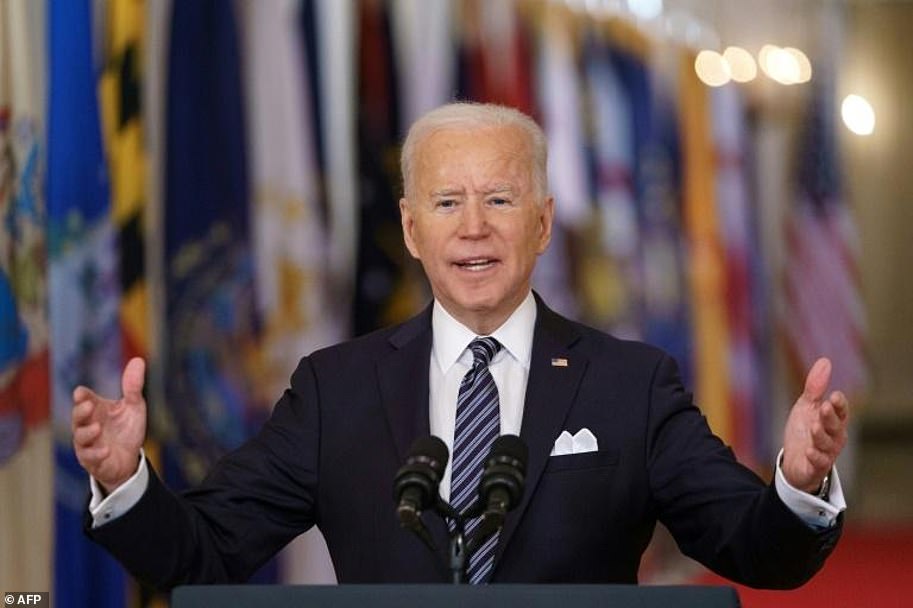 During an address to the nation last week, President Joe Biden condemned what he called ‘vicious hate crimes’ against Asian-Americans

‘At this very moment, so many of them, our fellow Americans – they’re on the front lines of this pandemic trying to save lives and still, still they’re forced to live in fear for their lives just walking down streets in America,’ Biden said.

Activists say broader anti-Asian discrimination has been fueled by talk of the ‘Chinese virus’ from former president Donald Trump and others. 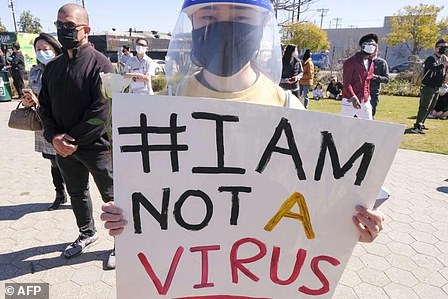 A protester takes part in a rally to raise awareness of anti-Asian violence, near Chinatown in Los Angeles last month

Just days into his presidency, Biden signed an executive order on January 26 condemning racism towards the Asian-American Pacific Islander (AAPI) community during the pandemic.

States are following suit, with California and New York allocating more resources to combating anti-Asian racism and draft legislation in the works in New York.

Racial motivation is hard to establish in many cases, but reported anti-Asian hate crimes more than doubled from 49 to 122 last year across 16 major US cities including New York and Los Angeles – even as overall hate crime fell, according to a California State University study.

The report looked at events categorized as criminal in nature and showing evidence of ethnic or racial bias, using preliminary local police data.

It aligns with another study from the Stop AAPI Hate advocacy group showing more than 2,800 incidents of racism and discrimination – including non-physical forms – targeting Asian-Americans and reported online across the United States between March and December last year.

‘The recent surge has to do with the fact that there’s blame being pointed at China’ over Covid-19, Choi said. ‘And then also couple that with racist rhetoric by the former president… and other elected officials.’ 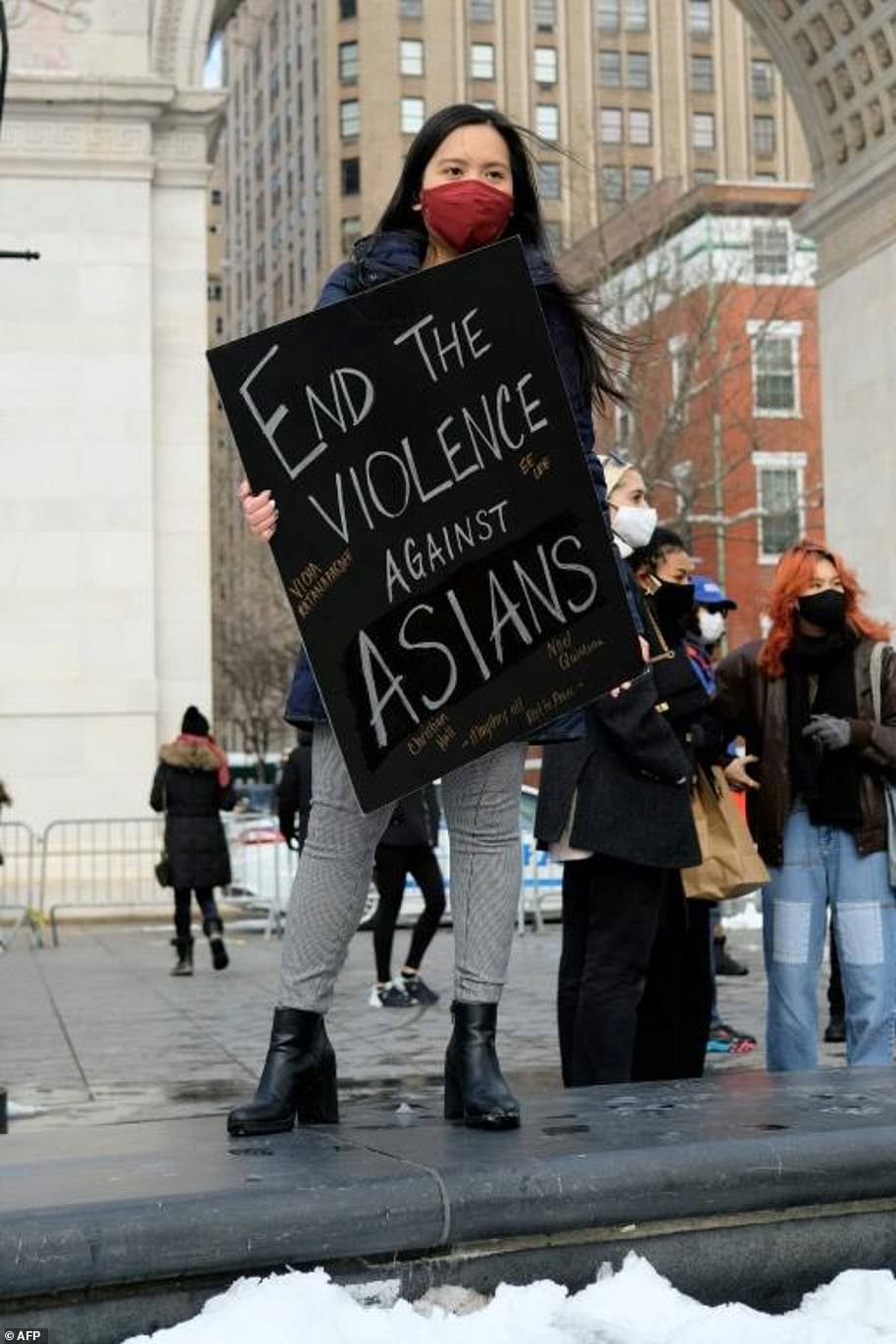 Reports of attacks, primarily against Asian-American elders, have spiked in early 2021 – fueled, activists believe, by talk of the ‘Chinese virus’ by former president Donald Trump and others