It was so close to being a brilliant night for Chelsea, however a late Barcelona equaliser leaves them on the back foot heading into the second leg.

After a hectic night of Champions League action, you would be forgiven for missing some of the incidental details from the game at Stamford Bridge.

Never fear, Sportsmail is here to put you right with some of the things you missed from the clash between Blues and Barca…

Chelsea were unbeaten in their last seven Champions League games against Barcelona (W2 D5), and continued that record on Tuesday night.

In truth, they hadn’t played each other in the competition since April 2012, when Chelsea won 3-2 on aggregate.

Nevertheless, it maintains an impressive record against Barca, and bodes well for the return leg next month. 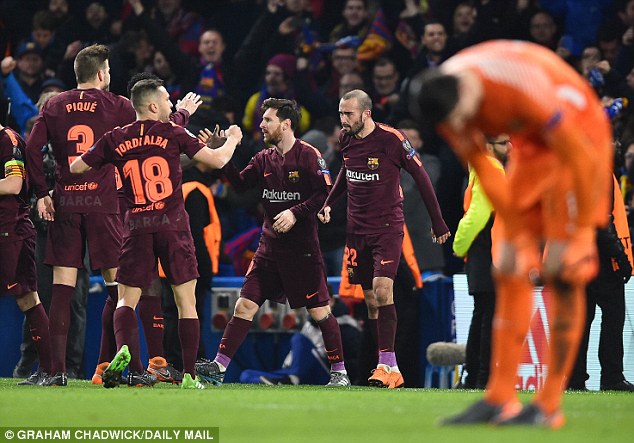 Barcelona are still unbeaten away from home in the Champions League this season, but they haven’t been prolific either.

In fact, no Barca player had scored a goal away from the Nou Camp in the current edition of the competition until Lionel Messi’s strike.

Barcelona had scored only one goal in their last five away games in the Champions League prior to this fixture, an own goal by Sporting Lisbon’s Sebastian Coates.

Lionel Messi scores against pretty much everyone, and scores an awful lot. However, not where Chelsea were concerned.

Messi had played 731 minutes against the Blues in the Champions League without scoring. Against no other team has he played that many minutes without ever finding the net.

That all came to a long awaited end, thanks to an Andreas Christiansen error and a slick low Andres Iniesta pass. 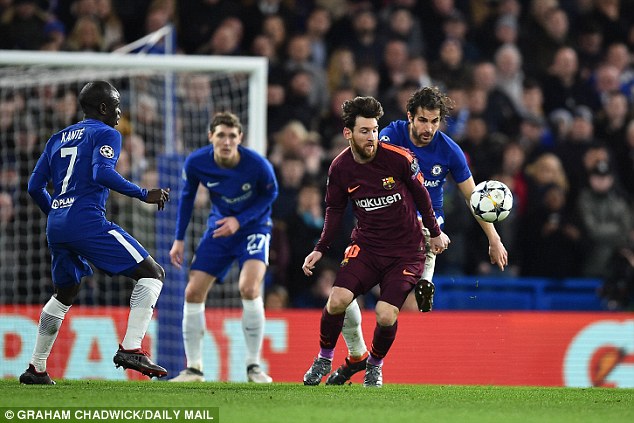 …but Suarez’s wait goes on

Goal and drought are two words which do not obviously go together where Barcelona are concerned.

However, while Messi ended his unprecedented block against scoring where Chelsea are concerned, Luis Suarez is on an even more alarming European slump.

Suarez has failed to score in the last 881 minutes of play in the Champions League, his longest drought in the competition. His last goal dates back to March 2017 against PSG. 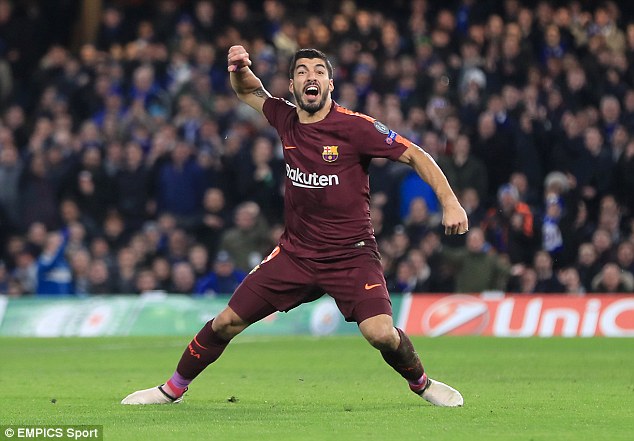 The Uruguayan also exploded at the fourth official

Suarez was not impressed when his penalty appeals were waved away just before Barcelona equalised, and he made his displeasure very clear indeed.

Feeling he had been tripped by Antonio Rudiger, Suarez launched a volley of abuse at the official, topped off with a two-fingered Churchill-esque salute.

Suarez didn’t get a penalty – all that arose from the incident was a booking – although Messi’s goal soon after may have helped him get over it. 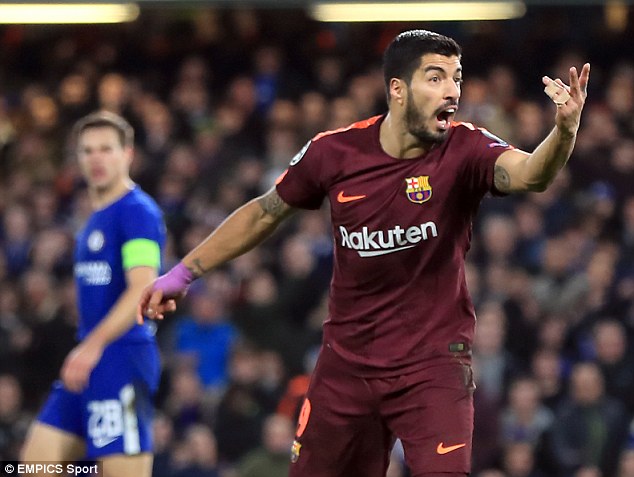 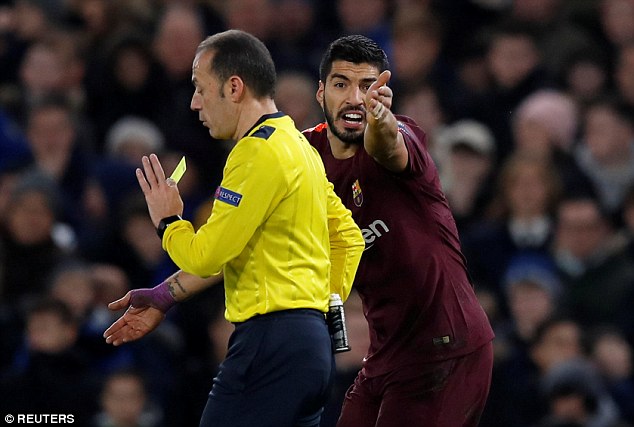 Messi boots up for his family

The Argentinian superstar put his faith in those closest to him to help him finally break his goal duck against Chelsea.

Messi wore specially designed boots with Antonella – his wife’s name – on his left foot, and Thiago, his oldest child, on the right.

The name of his youngest son, Mateo, was presumably present somewhere too. It all helped Messi senior on the night. 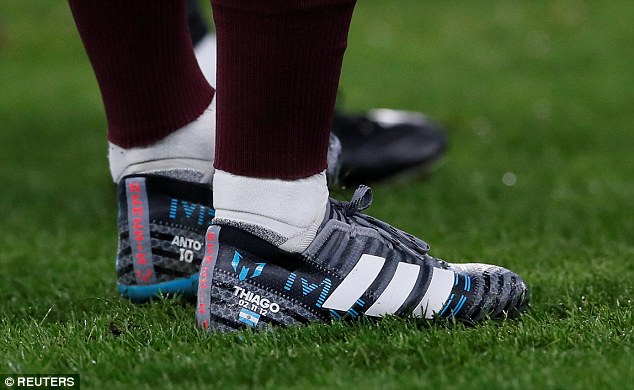 Messi wore boots with Antonella, his wife’s name, on his left and Thiago, his child, on the right

On Boxing Day 1999, Chelsea became the first side in the English top division to name a starting XI without any British players.

That was echoed on Tuesday, as for the first time in a match in the Champions League knockout stages, Chelsea fielded a starting line-up consisting entirely of foreign (non-English) players.

With Gary Cahill, Danny Drinkwater and Callum Hudson-Odoi on the bench, it was left to Chelsea’s foreign legion to get the job done. 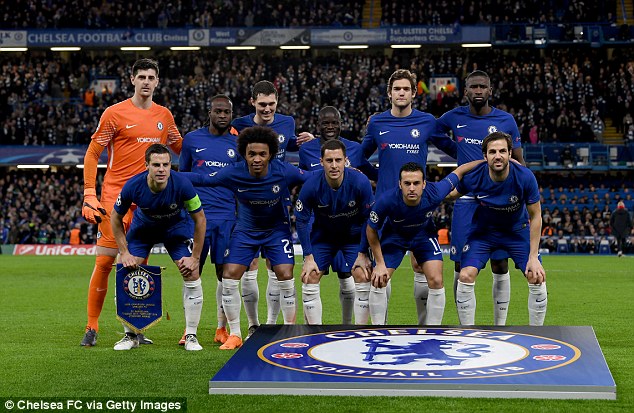 Ancelotti, Becks and Martinez in attendance

The meeting of two of football’s greatest teams unsurprisingly brought the great and the good of the sport to watch the action unfold.

Former England captain David Beckham was there with his children, presumably supporting Chelsea given his Real Madrid connections.

Belgium manager Roberto Martinez was also present, keeping an eye on Eden Hazard and Thibaut Courtois. Former Chelsea manager Carlo Ancelotti was another watching on, ex-Swansea boss Paul Clement at his side. 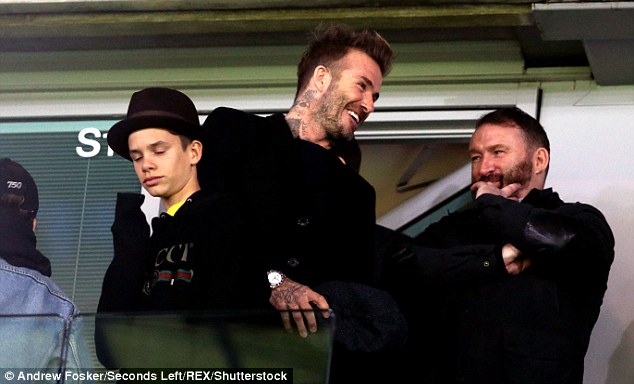 David Beckham was at Stamford Bridge with his children, presumably supporting Chelsea 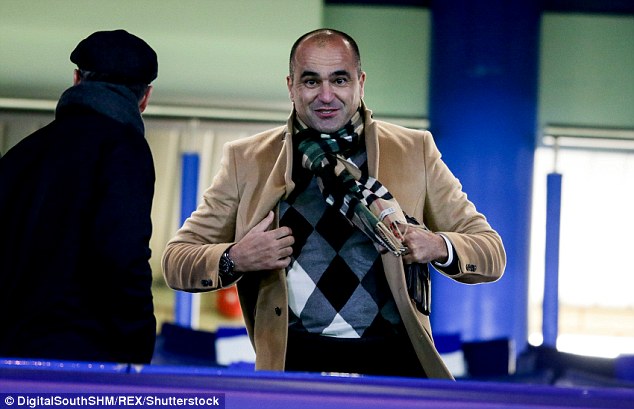 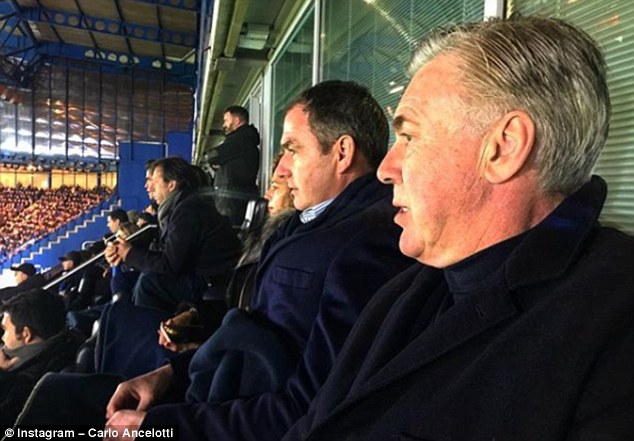