An eight-year-old boy was misdiagnosed with ADHD when he actually had sleep apnea, and now his mother is warning others about how the symptoms can resemble each other.

Melody Yazdani, of Vienna, Virginia, was left frustrated when her son Kian started acting up in school and at home.

He was irritable, would go into meltdowns, and had trouble concentrating, leaving doctors to conclude that he had ADHD.

But what Yazdani discovered through her own research was that her son was actually suffering from a sleep disorder and his ‘ADHD symptoms’ were just a result of a lack of sleep and struggling to breathe.

Since correcting his breathing – which included removing his tonsils and his adenoids – Yazdani says her Kian’s behavior has immensely improved and he no longer has tantrums or meltdowns.

It comes on the heels of a growing amount of research that suggests some kids are misdiagnosed and do not get enough sleep, resulting in behaviors that mimic ADHD.

Kian Yazdani, eight, from Vienna, Virginia, began having behavioral issues in the first grade. He was irritable, would have tantrums and throw things. Pictured: Kian with his mother, photo undated 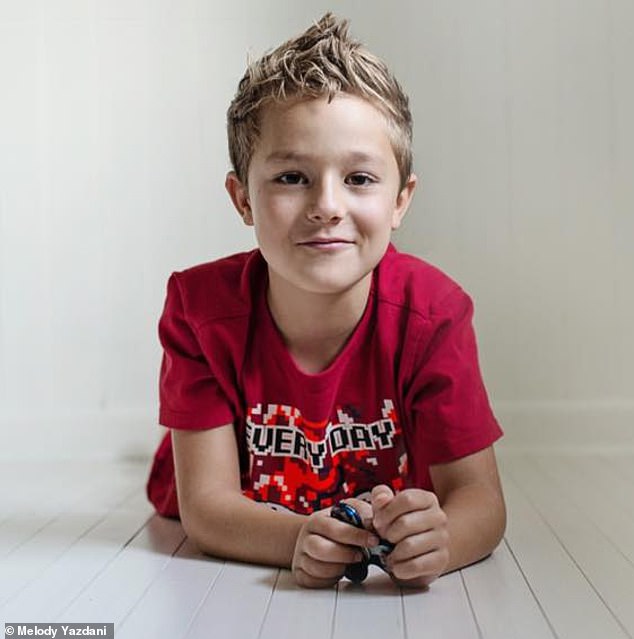 Doctors diagnosed Kian (pictured) with ADHD, until Melody found an article that suggested some kids are misdiagnosed and are not getting enough sleep, resulting in behaviors that are similar to ADHD

Yazdani wrote in a Facebook post on October 24 that Kian’s behavioral issues began when he was in first grade.

Parent-teacher conferences and new reward systems seemed to help in school, but not at home.

‘When Kian gets angry, he gets ANGRY,’ Yazadni wrote.

‘He gets fixated on little things…his fuse gets shorter and shorter, and he’s a picky eater who barely eats.’

She recalled one incident when her son found a hair in the shower and started yelling, ‘It’s gross! I can’t shower in there’ before proceeding to have a meltdown.

The next year, in second grade, Yazdani said Kian’s tantrums continued to intensify and that behavioral reports from his teachers were coming in almost daily

‘[They said]: “Kian is pushing”, “Kian can’t control his impulses”, “Kian is having a hard time staying in his seat”,’ she wrote.

‘And it is going on and on. Almost daily. And I’m mortified.’

Yazdani said her son would start screaming, hitting and throwing things almost every day starting at 5am, leaving her bewildered by his behavior.

At the recommendation of his pediatrician, Kian started seeing a therapist, who recommended ADHD testing.

Yazdani said at the time, she took Kian to see a pulmonologist and an allergist for a persistent cough he was having.

‘Each doctor is recommending more and more medications – two inhalers for the cough, an antibiotic (four different rounds) for the postnasal drip, a steroid, and it goes on and on,’ she wrote.

WHAT IS SLEEP APNEA?

Sleep apnoea is a serious sleep disorder in which breathing repeatedly stops and starts.

It occurs when the muscles and soft tissues in the throat relax, which blocks the airways.

The resulting lack of oxygen in the brain causes sufferers to wake regularly through the night.

Although snoring is a symptom of sleep apnea, not all those that snore have the disorder.

The condition has serious physical health consequences, including an increased risk of heart attack and stroke.

It is estimated that about 22 million Americans suffer from sleep apnea and that 80 percent of moderate or severe cases go undiagnosed.

manage their symptoms by wearing an oxygen mask at night or an oral device to keep their airways open.

Also around this time, Kian’s dentist told Yazdani that Kian’s teeth were ground almost halfway down – a sign he was grinding them at night.

Still bewildered by her son’s behavior, Yazdani said she came upon an September 2017 article from The Washington Post that ‘changed our life’.

The article discussed the prevalence of children with impulsive behavior over the last two decades.

While scientists and policymakers have turned to ADHD as the answer, a growing number of researchers actually believe that many kids are not getting enough sleep every night, resulting in behaviors that are similar to ADHD.

A number of studies have suggested that some children are misdiagnosed with ADHD and are actually suffering from insomnia, sleep apnea or other sleep disorders.

‘The connection – it was really a lot of luck,’ Yazdani told Yahoo Lifestyle.

‘I had suspicions that something was not right with Kian. In addition to the escalating behavior problems, he had dark under-eye circles, despite a strict bedtime of 7.30pm every night.’

She immediately scheduled appointments with a pediatric ear, nose, and throat specialist, an orthodontist, and a sleep center

‘All of the doctors were skeptical at first glance – here’s a mom with no medical degree who thinks she’s figured out what is wrong with her child,’ she said.

A sinus imaging scan revealed that Kian’s sinuses were almost completely block and inflamed – meaning he was sleeping with his mouth open at night.

Why is this bad? Not only are children not getting enough oxygen to the brain, which can led to fatigue, but studies have shown kids who mouth-breathe have slower growth and perform worse in school because of fatigue and inattention.

Next, the doctors followed up with a sleep study.

This is one of the five stages of sleep, characterized by the eyes moving rapidly in various directions and when most dreaming occurs.

Doctors also measured the levels of oxygen in his blood. Values under 90 percent are considered low – and Kian’s was in the low 80s. 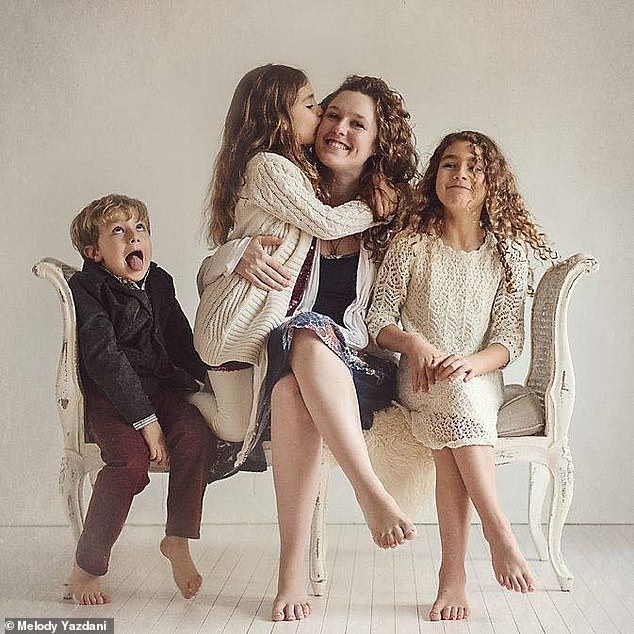 A sleep study found that Kian actually had sleep apnea. Since correcting his breathing, Melody says Kian no longer has tantrums and his behavior has improved. Pictured: Melody with Melody with Kian and two of her three daughters

What Kian was suffering from was not, in fact, ADHD but sleep apnea, a serious sleep disorder where breathing repeatedly stops and starts throughout the night.

In addition to loud snoring and difficulty breathing, symptoms can include being sleepy during the day, difficult paying attention and irritability – all things Kian was experiencing.

Kian had surgery to remove his tonsil and adenoids, glands located in the roof of the mouth, which Yazdani said ‘immensely’ improved his breathing.

Yazdani said her son’s behavior has completely changed with the correct diagnosis. There are no more tantrums or an OCD-type of fixation on little things.

In the latest sleep study conducted, Kian had 360 minutes of REM sleep, and oxygen saturation above the minimum threshold.

‘No behavior reports in school. His appetite has exploded, he’s no longer a picky eater, and he had a huge growth spurt two weeks after the surgery,’ she wrote.

‘Please share this, you may help someone – I wish I had learned this information years ago!

The original Facebook has more than 32,900 reactions and has been shared more than 237,600 times.