His wife Emma Coronel arrived hours after the Brooklyn Bridge was closed to allow the motorcade to take the 61-year-old to the courthouse in Brooklyn.

The former beauty queen arrived at the  courthouse in a suit jacket with puffy velvet sleeves, black suit pants and black stilettos.

After a week of jury selection, the trial was due to begin with with lawyers’ opening statements in the federal court, amid intense public attention.

Federal prosecutors say that as leader of Mexico’s Sinaloa Cartel, Guzman, directed massive shipments of heroin, cocaine, marijuana and methamphetamine bound for the United States. He faces 17 criminal counts and a potential life sentence if convicted. 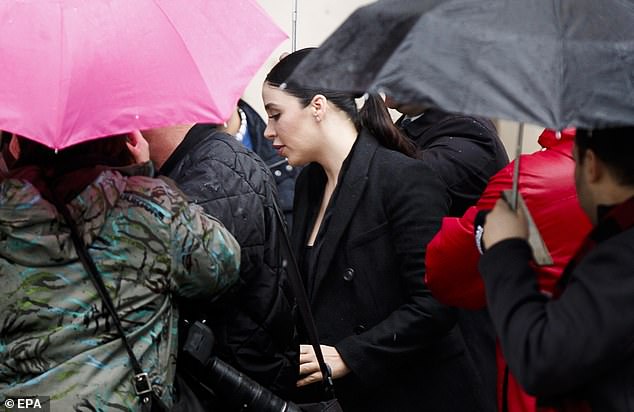 El Chapo’s wife, Emma Coronel, arrives at the courthouse in Brooklyn. Last week the judge denied his legal team’s application for the pair to be allowed a hug in the courtroom, citing security fears 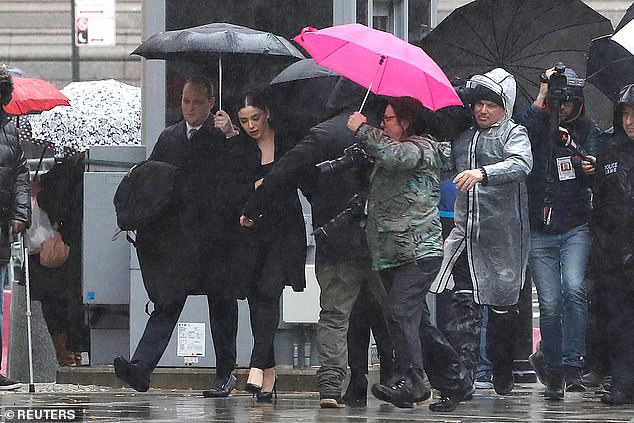 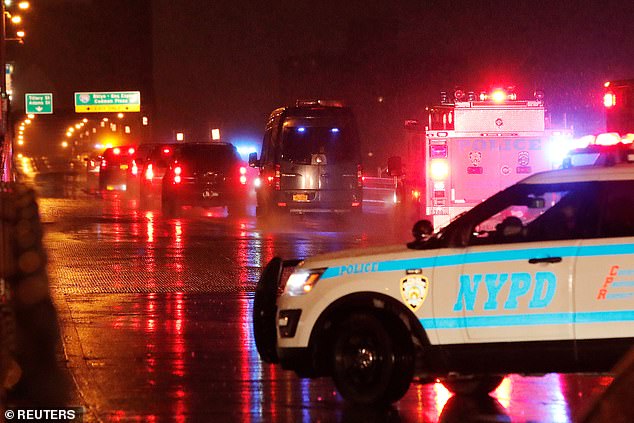 The Brooklyn Bridge this morning:  It was closed to traffic as the El Chapo motorcade passed over

As well as smuggling drugs to the United States, the Sinaloa Cartel has played a major role in narco violence between rival gangs that has torn areas of Mexico apart and defied successive governments.

More than 200,000 people have been killed — many in cartel feuds — since the Mexican government sent troops in to take on the drug gangs in 2006.

The security around him is so strict that U.S. District Judge Brian Cogan, who is presiding over the case, last week denied a motion by Guzman asking to hug his wife before the trial.

The jurors will remain anonymous and be escorted to and from by armed U.S. marshals. Prosecutors have said the security is necessary because of Guzman’s history of intimidating and even ordering murders of potential witnesses. Guzman’s lawyers have called those claims unfounded.

Guzman’s lawyers have signaled that they intend to downplay their client’s role in the cartel and argue that the prosecutors’ witnesses are motivated by self interest and not believable.

Guzman, who twice dramatically escaped from Mexican maximum security prisons, has been kept in solitary confinement in Manhattan and transported to court in Brooklyn in a heavily guarded motorcade.

Prosecutors have also taken extraordinary measures to protect witnesses they plan to call during the trial, which could last up to four months.

According to court filings, those witnesses will include former Sinaloa Cartel members and others involved in the drug trade who are now cooperating with the U.S. government. None have been publicly named, and some may testify under aliases.

Guzman was one of world’s most wanted fugitives until he was captured in January 2016 in his native Sinaloa. He was extradited to the United States a year later. 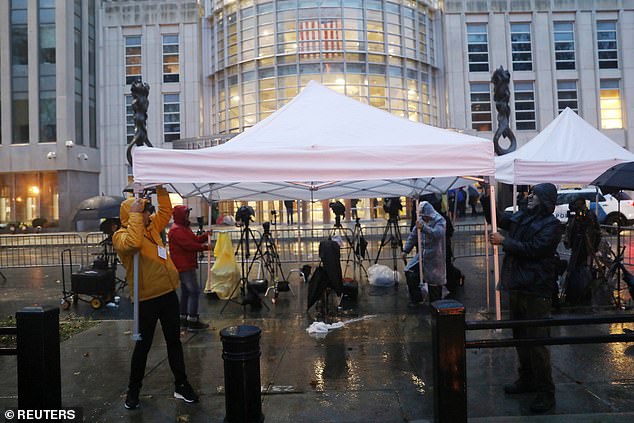 The four-month trial will have extraordinary security and has attracted press from around the world (above, media set up camp outside the Brooklyn courthouse)

In 2009, Forbes Magazine put him on its list of the world´s richest people, with an estimated $1 billion fortune but investigators say it is impossible to know exactly how much he was worth.

Guzman used his wealth to buy off politicians, police chiefs, soldiers and judges, Mexican prosecutors say. His nickname, a reference to his five foot, six inch (1.67 meters) height, is often translated in English as “Shorty.”

Several former Guzman associates are known to have struck deals to cooperate with U.S. prosecutors, raising the possibility that they will appear on the witness stand.

Beltran Leyva, once a partner and later a rival of Guzman, was found guilty of U.S. drug charges and sentenced to life in prison by a federal judge in Washington last year.