The man believed to be the personal assistant to Mexican druglord Joaquin ‘El Chapo’ Guzman Loera who then ‘flipped’ on his boss was extradited to the United States last week, court documents state.

Mario Hidalgo Arguello, who is known by the nickname ‘Nariz’ or ‘Nose’ because of the unusual appearance of his nose, has been in the custody of federal authorities in San Diego since January 18.

Court documents indicate that Hidalgo was brought to the US a week ago on Saturday to face charges of marijuana trafficking, according to The San Diego Union-Tribune.

Hidalgo’s extradition to the US comes six years after he was arrested by Mexican authorities.

Guzman was sentenced last year to life in prison without parole and moved to a high-security facility in Colorado after being convicted in a US court of smuggling tons of drugs over a colorful, decades-long career.

Mario Hidalgo Arguello, who is known by the nickname ‘Nariz’ or ‘Nose’ because of the unusual appearance of his nose, has been in the custody of federal authorities in San Diego since January 18 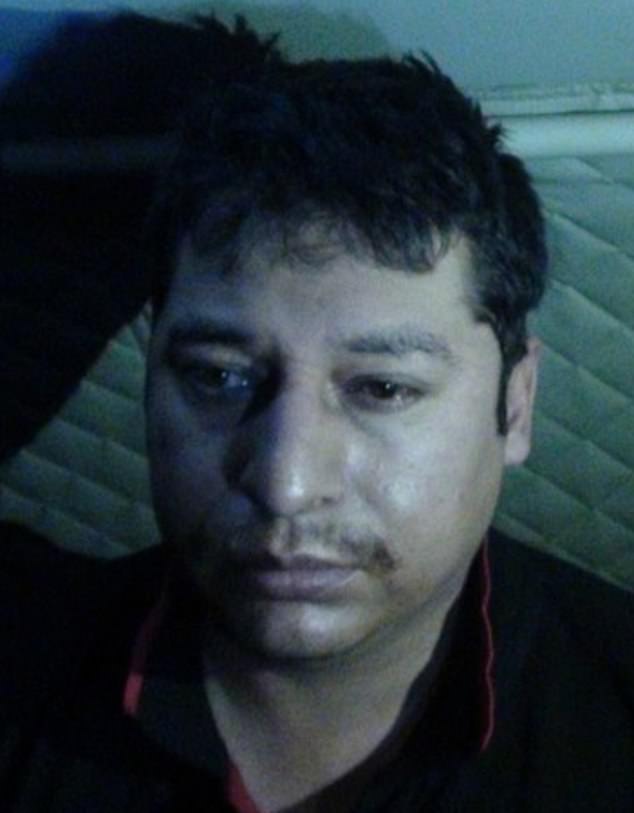 Hidalgo was arrested by Mexican authorities in February 2014. He was indicted by a federal grand jury on marijuana trafficking charges

The federal government has been quiet about the extradition of several alleged senior members of Mexico’s notorious drug cartels.

The Justice Department declined to comment on Hidalgo’s extradition.

According to the Union-Tribune, Hidalgo was arrested in February 2014 at his home in Culiacan, the capital and largest city of the Mexican state of Sinaloa.

Culiacan is also home to the Sinaloa cartel, which is considered to be the world’s most powerful narcotics trafficking organization.

In February 2014, Mexican authorities raided a stash house after they were able to locate a cell phone belonging to El Chapo’s communications chief, Carlos Ho-Ramirez.

During the raid which took place around 2am on February 17, 2014, a group of Mexican marines and US federal agents took Hidalgo into custody.

He was said to be hiding in his master bedroom at the time of his arrest.

The arrest of ‘Nariz’ was considered ‘huge’ at the time because he ‘flipped immediately’ and revealed the locations of five more stash houses and hideouts used by senior cartel members in and around Culiacan.

Nariz told authorities that the cartel equipped its stash houses with steel doors and secret tunnels under bathroom tubs that led to sewage systems. According to the DEA, Hidalgo was a ‘runner’ and a ‘gopher, an individual that would go and retrieve things for’ Joaquín ‘El Chapo’ Guzmán (center), the head of the notorious Sinaloa drug cartel

While the Mexican marines were using a battering ram to try to penetrate the stash house, El Chapo managed to evade arrest by escaping through a secret route under the bathtub, according to ABC News.

He was eventually arrested by Mexican authorities along with another top lieutenant in a hotel in Mazatlan on February 21, 2014.

Victor Vazquez, a Drug Enforcement Administration agent who was part of the manhunt for El Chapo, testified at the drug lord’s federal trial in Brooklyn in January 2019.

He told the court how Mexican authorities got to El Chapo by arresting members of his inner circle, including Nariz. 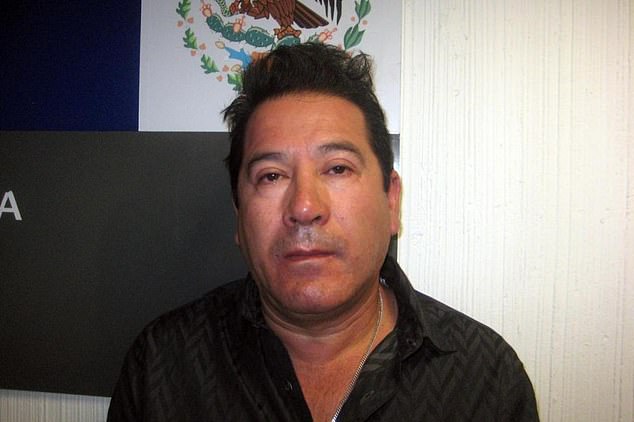 José ‘The Lord of the Tunnels’ Sánchez Villalobos (pictured) was extradited from Mexico to the United States earlier this month. Sánchez Villalobos is accused by a federal California court of building and managing two underground tunnels that were used by El Chapo’s organization to ferry drugs across the Mexico-United States border 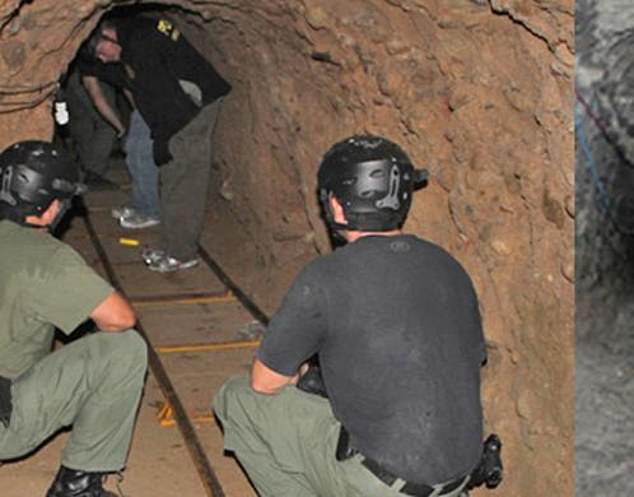 Investigators check one of the two tunnels that were discovered in November 2010 and November 2011 and connected Tijuana, Mexico, and San Diego, California

‘He knew absolutely everything about Guzmán Loera.’

While Nariz’s cooperation did not directly lead to El Chapo’s arrest, he did provide information which yielded more arrests.

In 2015, Hidalgo, while in Mexican custody, was indicted by a federal grand jury in San Diego for marijuana trafficking.

He made his first court appearance on American soil on Monday, the same day that the indictment against him and two other co-defendants were unsealed.

One co-conspirator pleaded guilty to conspiracy to import methamphetamine in a separate case. His sentencing is scheduled for Monday.

The other co-conspirator pleaded guilty to conspiracy to distribute marijuana and was sentenced to five years in prison.

Federal prosecutors say that Hidalgo’s co-defendants used a yacht named Out Hook’n to transport marijuana from Mexico into the United States.

In 2012, federal agents searched the boat and seized 679 large bricks of marijuana in addition to other narcotics.

Hidalgo, whose role in the trafficking scheme is unclear, has pleaded not guilty.

The federal government alleges that he built and oversaw El Chapo’s network of tunnels used to smuggle drugs across the border into the US. 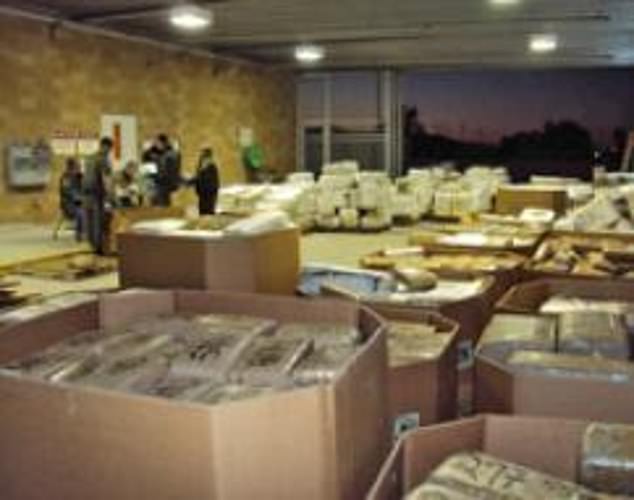 U.S. federal agents raided two separate warehouses in San Diego, California, in November 2010 and November 2011. The first bust netted 35,350 pounds of marijuana while the second investigation led agents to 51,084 pounds. The drugs were smuggled across two underground tunnels built and operated by José ‘The Lord of the Tunnels’ Sánchez Villalobos, then an associate of El Chapo 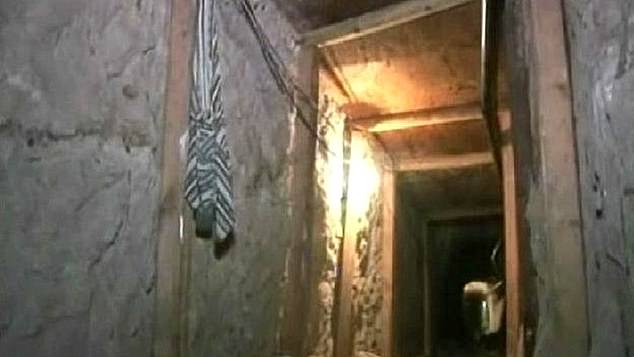 He was indicted by a federal California court in October 2012 and charged with building, financing and operating two secret underground tunnels along the Mexico-US border.

Investigators say he supervised the cartel’s shipment of marijuana to the Tijuana area. The drugs were then trafficked to the United States across the two tunnels.

Federal agents from the HSI, the Drug Enforcement Administration (DEA) and U.S. Customs and Border Protection’s Border Patrol unearthed the first tunnel during a Thanksgiving 2010 raid that netted 35,350 pounds of marijuana.

The 612-yard illicit passageway included rail tracks that linked a warehouse in San Diego’s Otay Mesa industrial park with one in Tijuana, Mexico.

The elaborate tunnel had an entrance in Mexico that was accessible through a hydraulically-controlled steel door and an elevator hidden under  the warehouse floor.

The second tunnel – 600 yards in length – was discovered in the Otay Mesa area in November 2011. Agents seized 51,084 pounds of marijuana.

Despite only having an elementary school education, Sánchez Villalobos was hired by El Chapo to handle the cartel’s finances.

The Lord of the Tunnels was also in charge of building tunnels at El Chapo’s homes in Mexico, which were crucial in allowing him to evade capture on numerous occasions.

Sánchez Villalobos is charged with ‘nine counts of conspiracy to distribute and import marijuana and four counts of building, financing and using the tunnels.’ All but one of the counts carry a maximum sentence of life in jail.