Miguel Angel Martinez, a former pilot for El Chapo, told a jury Monday he nearly killed the Mexican drug lord in a plane crash in 1987.

Miguel Angel Martinez, who was employed as Joaquin ‘El Chapo’ Guzman’s pilot in the late 1980s and early 1990s, testified that his boss and his bodyguard were aboard the plane when the landing went awry.

He had been made a cartel administrator helping oversee the Colombian shipments and bribery.

Martinez said in a court statement: ‘When I went to land the plane, the propeller hit the ground.’

The jury chuckled when the pilot recalled from the life-threatening incident: ‘Mr. Guzman told me I was a really bad pilot.’

Back when business was starting to boom, Guzman took delight in seeing massive cocaine shipments arriving by air from Colombia, occasions he code-named ‘parties’ that made him so rich he could pay multimillion-dollar bribes to a powerful police commander.

Pilot Miguel Angel Martinez (third from right) sits next to El Chapo (second from right) in this undated photo. Martinez testified Monday that he nearly killed the Mexican drug lord in a crash in 1987 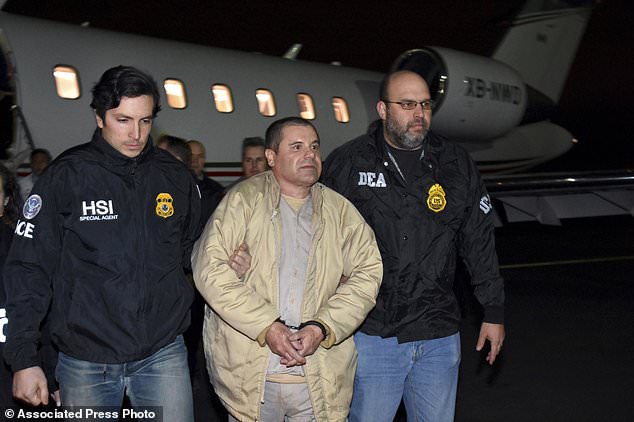 The largest shipment ever seen at that time was carried by a fleet of 10 planes, each hauling hundreds of kilos, that landed one day on a hidden airstrip.

At the time, Guzman ‘was very happy,’ Martinez said. He added Guzman told him, ‘Compadre, now it’s a great party.’

In exchange, Calderoni tipped off the cartel about investigations and offered other protections that helped keep Guzman from getting caught.

Calderoni was known in that era for helping solve the slaying of a drug enforcement agent by drug dealers in Mexico in 1985.

He also was accused of corruption and torture before slipping out of the country to live in McAllen, Texas, where he was gunned down in a suspected hit in 2003. 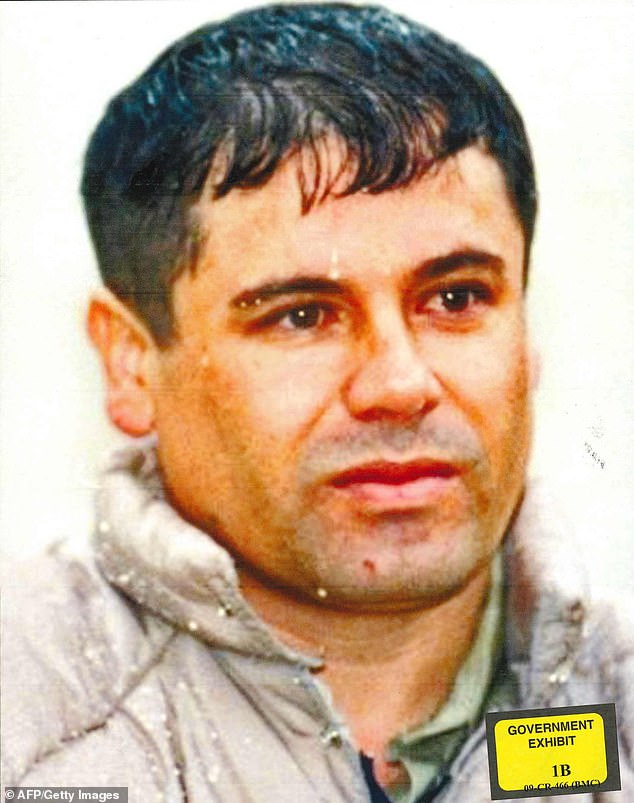 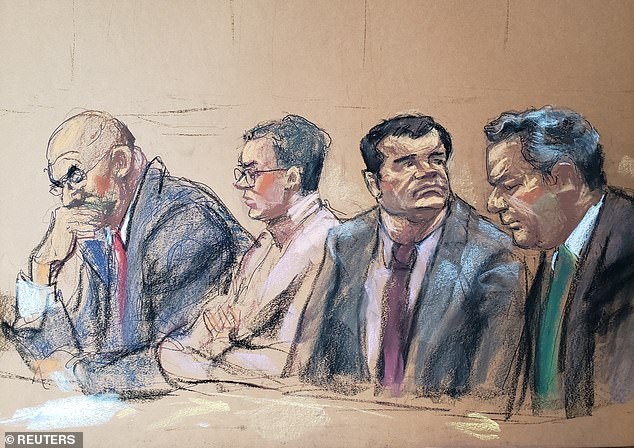 Guzman was extradited to the United States last year to face drug-trafficking charges accusing him of running a cartel known for greed and violence.

His lawyers say he is being framed by cooperators like Martinez, whose witness protection status remains unclear.

To show that Martinez actually knew Guzman, prosecutors entered into evidence a photo they said shows him sitting next to Guzman at a social gathering sometime in the early 1990s.

The prosecutors had the face of Martinez obscured because they say having images of him go public could put his life in danger.

Last week, another former cartel member who has pleaded guilty and is behind bars testified that a high-level security chief in Mexico and a second law enforcement official who once worked under the country’s new president-elect took millions of dollars in bribes in the mid-2000s.

He described how Guzman was born into poverty in a part of the Sinaloa countryside known for growing marijuana and poppies for heroin.

He testified that the future kingpin told him he went into the drug trade because ‘he didn’t have anything to eat.’