Joaquín ‘El Chapo’ Guzmán planned another great escape after he was recaptured by Mexican forces in January 2016 – almost a year before he would be extradited to the United States.

The co-founder of the Sinaloa Cartel, who once broke out of jail in a laundry cart, famously tunneled his way out of the Altiplano maximum security federal prison in 2015.  He was on the run for months before law enforcement finally caught up with him in January 2016 and decided, against the advice of prison guards, to lock him up in the same jail he escaped from.

Now prison officials have revealed that El Chapo tried to dig a second escape tunnel, before staff discovered its entrance on the outskirts of the holding facility where other notorious capos, including El Chapo’s brother, Miguel Ángel Guzmán.

The cartel leader was then transferred to another penitentiary in Ciudad Juárez before being extradited to the United States on January 19, 2017.

Joaquín ‘El Chapo’ Guzmán had plans for another great escape in mind after he was recaptured by Mexican forces in January 2016. He ordered his gang to build a second tunnel at the Altiplano jail in Almoloya de Juárez, a city in the state of Mexico. Pictured is the first tunnel that was constructed for his July 2015 escape 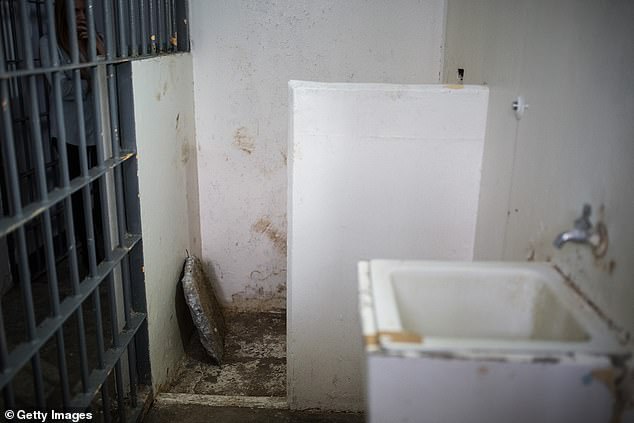 El Chapo escaped twice from Mexican jails. The last time he did, on July 16, 2015, the founder of the Sinaloa Cartel escaped through a hole in his bathroom (pictured) that led to a mile-long tunnel 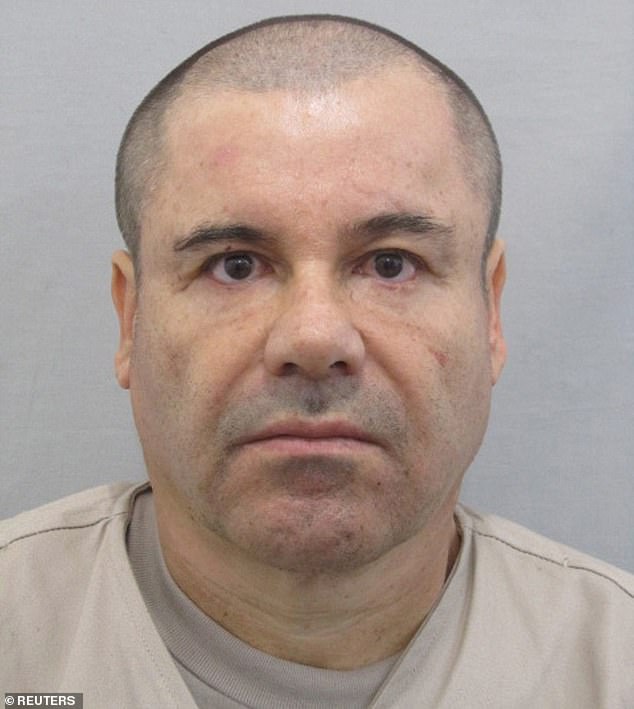 All of tunnels were later destroyed. No images have been released of the second tunnel.

According to state news agency Notimex, Nuevo León prison official Eduardo Guerrero Durán said he had warned officials that El Chapo should be placed at a different facility.

Prison staff became suspicion when the Mexican drug lord started making repeated trips to the bathroom area and were later alarmed when they heard noise and vibrations generated by El Chapo’s gang.

They did a sample test of soil gathered from the penitentiary and confirmed the worse – drug kingpin who amassed a $14 billion fortune off the drug trade was looking for another way out. 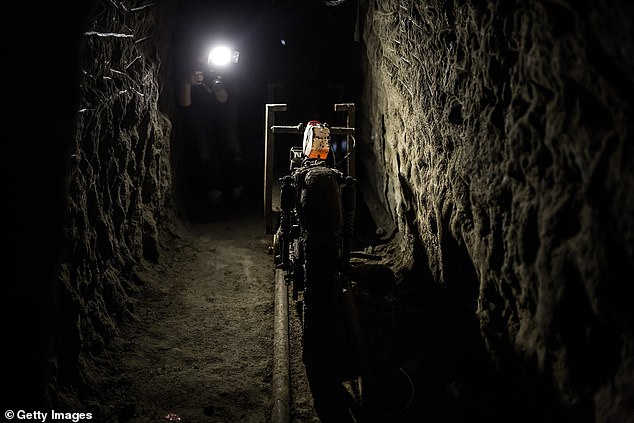 El Chapo used a motorcycle to travel down a mile-long tunnel that was built under the a jail he escaped from in 2015. Mexican officials discovered a second tunnel at the same facility after he was returned there following his recapture in January 2016 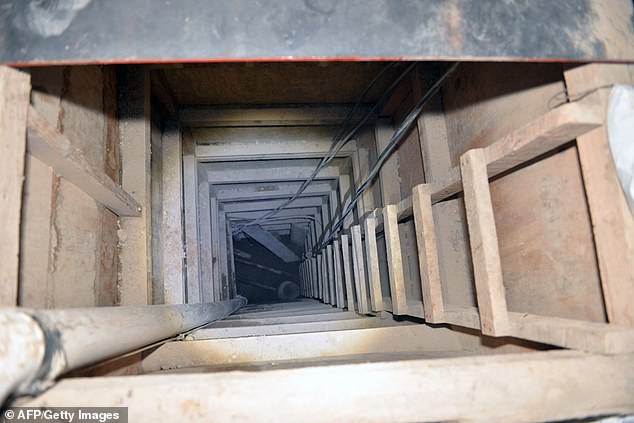 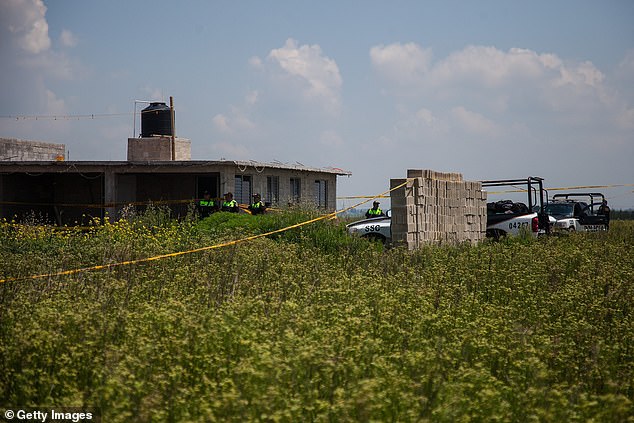 ‘Luckily for the follow-up [supervisions] we had on him, not day-by-day, but hour-by-hour, we could detect it,’ Guerrero Durán said.

This time, the Mexican government wasted no time and transferred El Chapo to a jail in Ciudad Juárez.

During his time there he was not allowed to talk to anyone except the jail official and a psychologist he met once or twice with.

Police released photos of El Chapo’s first tunnel after his escape. It was an impressive mile-long subterranean passageway, built by gang members, and located beneath his prison cell bathroom stall.

Notimex also acquired unedited video footage of a conversation Guerrero Durán had with the Mexican drug lord just days before he was handed over to U.S. officials.

During the short exchange, El Chapo tried to downplay his two prison escapes – in 2001 he was escorted from the Puente Grande maximum security facility in Jalisco on a laundry cart and tossed into the trunk of a getaway vehicle – and begged for more recreational time in the prison yard. 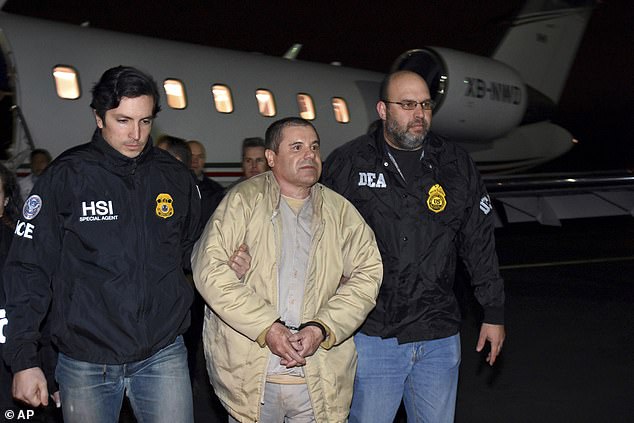 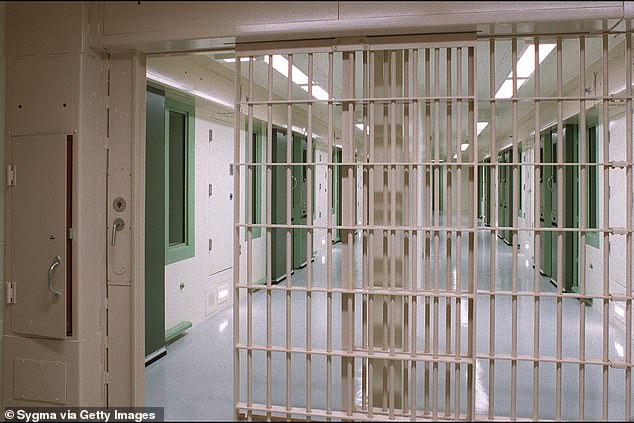 The 62-year-old drug kingpin was assigned to the super maximum facility jail in Florence, Colorado, where no inmate has ever escaped from.

‘The problem is you have escaped two times,’ Guerrero Durán told El Chapo.

But Guzmán calmly countered by saying, ‘well, that’s another thing.’

‘How is it another thing? That’s why there are security measures,’ Guerrero replied, before El Chapo shyly told him, ‘Oh, no. Security? I am not saying there in no security.’

As his days were numbered in Mexico, El Chapo also complained over the lack of sleep he was getting and said it wasn’t fair that prison staff where doing cell checks at least ‘14 times’ a day.

El Chapo was extradited to the United States on January 19, 2017.

The 62-tear-old was sentenced to life in prison plus 30 years by a judge at a federal court in Brooklyn and was assigned to the super maximum facility jail in Florence, Colorado, where no inmate has ever escaped from.