The mayor of El Paso, Texas bizarrely tried to walk out on a press conference Friday after being challenged on the city’s worsening migrant crisis – as witnesses claim to have seen immigrants emerging from sewers and disappearing into the night.

Mayor Oscar Leeser was challenged on why the city refused to declare an emergency as they grapple with the daily release of roughly 1,600 migrants to local shelters and streets.

He claimed that it wouldn’t make a difference in helping El Paso get any more than the $6 million commitment from FEMA to try and stop the wave coming from the nearby border, which surged to nearly 2,500 per day last weekend.

However, when the city manager Mario D’Agostino disagreed with him, Leeser began to walk off and tried to take the microphone from him.

It comes as news crews from El Paso local station KVIA claim to have witnessed ‘five or six people’ lifting themselves out of a manhole in Segundo Barrio – an area not far from the border.

The mayor of El Paso, Texas Oscar Leeser (pictured front left) bizarrely tried to walk out on a press conference Friday and take the microphone with him as the city’s migrant crisis grows even worse, with witnesses claiming to see immigrants emerging from manholes in the area 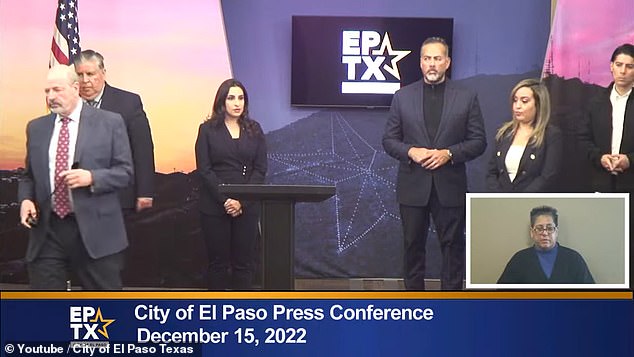 Leeser (pictured left) was challenged on why the city refused to declare an emergency as they grapple with the daily release of roughly 1,600 migrants to local shelters and the streets of the border city

A local resident told the station that illegal aliens are now using US waste water system via openings at the Rio Grande to get in.

D’Agostino told the New York Post the city is aware of the problem.

‘We’re in communication daily with our Customs and Border Patrol partners so they can increase patrols in that area because people are coming through, and we want to make sure they are getting census so they know who is entering,’ he said.

The bizarre press conference happened as preparations for even larger flows of migrants to the city if Trump-era asylum restrictions end next week as scheduled.

The mayor said of declaring an emergency: ‘We were able to get the funding without having to. We can also get some assistance from the state without having to do that. Declaring a state of emergency, to me, was not an option. To be able to work with our partners was a great option.’

He then argued that state officials had also told him that declaring the state of emergency was not necessary and wouldn’t make a difference.

However, later in the presser, D’Agostino did make clear what the differences would be: ‘That declaration allows the state to open additional funding outside of their normal budget.’ Leeser then ends the press conference and takes away the mic.

Leeser said the city is distributing outdoor toilets and water stations as it offers overnight hotel rooms to migrants, whose numbers are exceeding capacity at a county reception facility and the region’s network of shelters with nonprofit and faith-based groups.

The Department of Homeland Security is indicating it may release more migrants into the United States when Trump-era asylum restrictions end next week, with local government and border officials warning of immigrants waiting to cross into the U.S.

Under current restrictions, migrants have been denied rights to seek asylum more than 2.5 million times on grounds of preventing the spread of COVID-19.

El Paso in recent days has witnessed hundreds of migrants wading across shallows waters of the Rio Grande into the U.S., forming lines along a border wall to approach immigration authorities and request refuge. 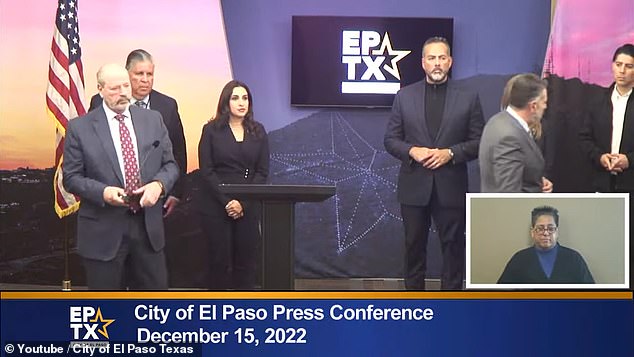 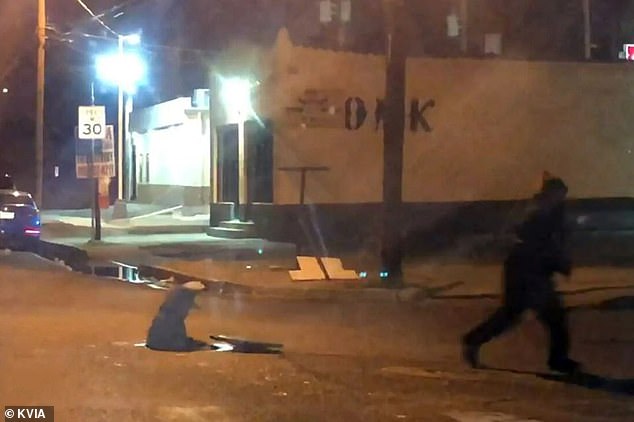 Most recently, local news cameras caught migrants coming out of manholes into the city

A local resident told the station that illegal aliens are now using US waste water system via openings at the Rio Grande to get in. 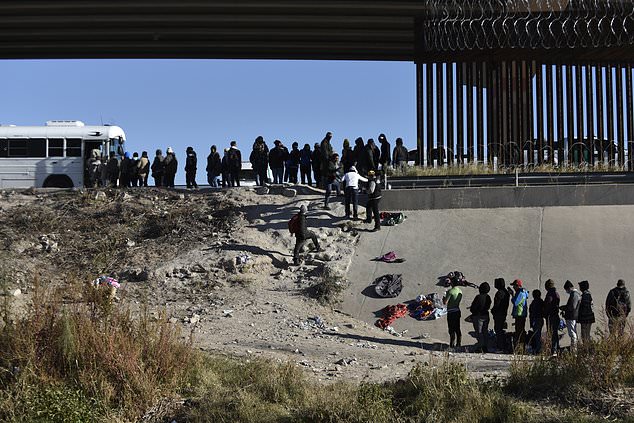 Migrants wait to get into a U.S. government bus after crossing the border from Ciudad Juarez, Mexico, to El Paso, Monday

City officials fear the asylum-rule change could double local migrant crossings, estimated at roughly 2,500 migrants a day over the past week. D’Agostino suggested that number could go as high as 5,000 a day soon.

Fernando Garcia, director of the Border Network for Human Rights, said migrants currently perceive Ciudad Juárez, across from El Paso, as a relatively secure place to approach the border amid dangers in Mexico of extortion and organized crime.

‘This funding and shelter is not the answer, it’s a Band-Aid to really a bigger problem,’ said Leeser, a Democrat elected in 2020.

‘It’s something we’re going to have to work with the (United Nations) and other countries, to work through a situation … that again is bigger than El Paso and that now has become bigger than the United States.’

D’Agostino, a deputy city manager who has led the response, said the sheer number of migrants is straining not only local staff but also U.S. Customs and Border Protection.

‘They’re working long hours, day and night, they’re doing processing rather than their primary function of securing the border,’ he said.

City officials say that most of the migrants released in recent days by federal immigration authorities have some financial means or sponsors in the U.S. to pay for transportation to communities in the U.S. interior.

But he said the city is bracing for an even larger surge in asylum-seeking migrants that may not have resources for further travel.

The city recently disbanded its aid and communications center for migrants, while suspending a busing program that delivered thousands of mostly Venezuelan migrants to Chicago and New York in September and October.

D’Agostino outlined a new strategy that might ferry migrants to large, nearby transportation hubs, such as Dallas, Denver and Phoenix. 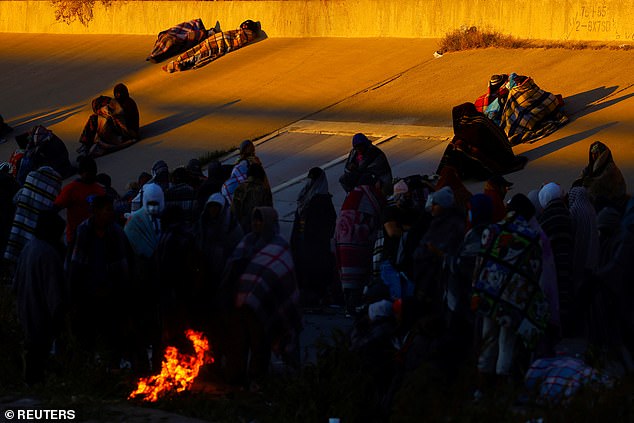 Migrants queue near the border wall after crossing the Rio Bravo river to turn themselves in to U.S. Border Patrol agents to request asylum in El Paso 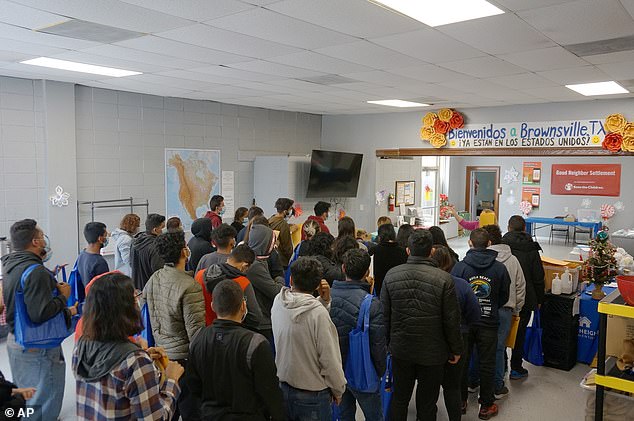 People line up inside the migrant welcome center across from the bus station in Brownsville, Texas, on Friday 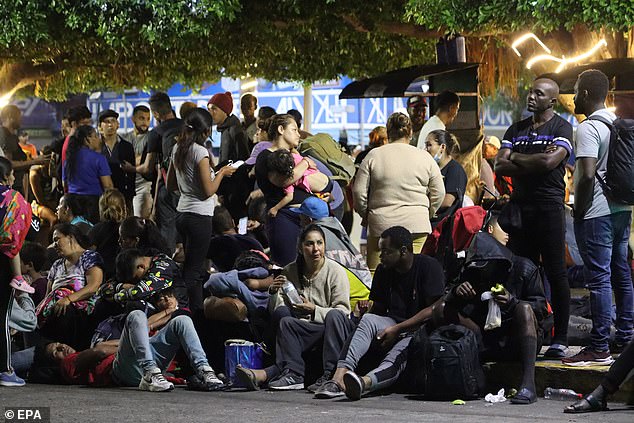 He said federal immigration authorities are preparing to possibly process and directly release migrants at a bridge that connects Ciudad Juárez, Mexico, and El Paso.

The city’s response to surges in migration numbers stands in contrast to border-security efforts by Texas Gov. Gregg Abbott, who has deployed troops to the border and gotten attention for busing migrants to faraway Democratic strongholds.

El Paso erected new fencing along the U.S. side of the southern border as thousands of migrant crossings over the weekend have put residents of the Texas city on edge.

Workers were pictured by DailyMail.com on Tuesday putting up fencing in an apparent attempt to prevent illegal crossings into El Paso, Texas or direct migrants to one specific point to turn themselves into Border Patrol officials.

Some El Paso residents claim they are not worried about migrants who are turning themselves over once crossing the border, but expressed concern about those trying to evade the law.

‘This has never happened before. Never,’ El Paso resident Carmen Wilburn told NewsNation. ‘I feel very unsafe and not secure at all here.’

Wilburn said she sees migrants jumping fences, running through yards in her neighborhood and ‘hiding in the bushes by the side of our house.’

‘It’s scary,’ said Wilburn, who cares for her 86-year-old father at their El Paso home. 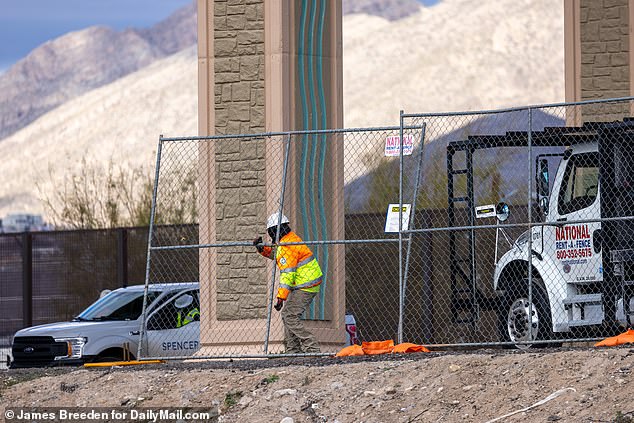 Workers were pictured putting up new temporary fencing along the U.S. side of the southern border on Tuesday 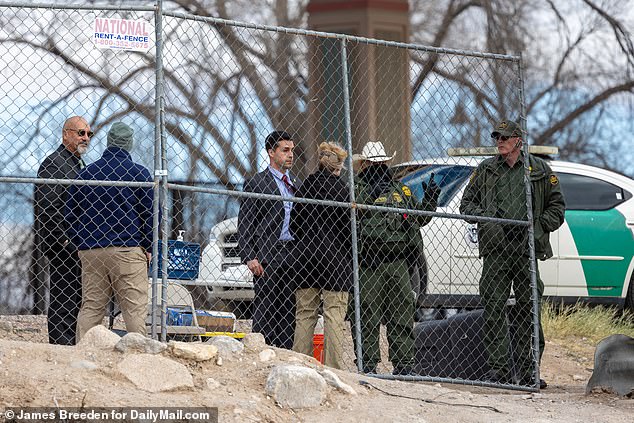 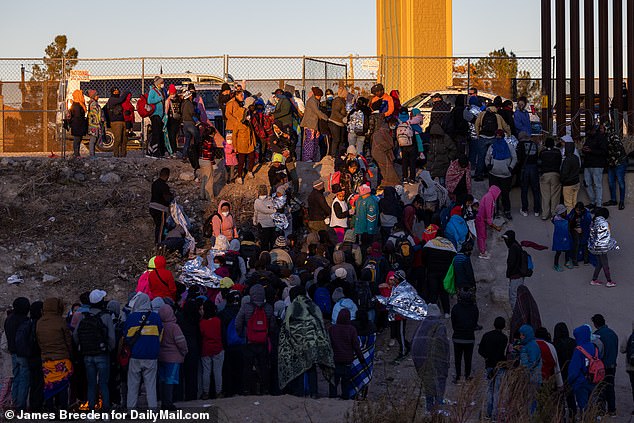 From Sunday to Monday, border crossings reached a daily average of 2,460 in El Paso, Texas alone. PicturedL A huge influx of migrants cross the Rio Grande River into the U.S. from Ciudad Juárez, Mexico on Tuesday, December 13

Between Sunday and Monday in the El Paso sector alone, the average number of asylum-seekers crossing the border reached a daily average of 2,460, according to Border Patrol’s El Paso Sector Chief Peter Jaquez.

El Paso resident Ivan Pierre Aguirre, who documented some of the migrant crossings, told Newsweek: ‘Our resources are going to put to the test… again.’

As migrants were booted from overcrowded border facilities, at least 500 were forced onto the streets of El Paso as temperatures in the area reached 34F this week.

Residents, according to Aguirre, brought coats and blankets – and even a clean mattress – to those sleeping outside on the ground. Many migrants were pictured flattening out cardboard to use as cots on the streets.

An El Paso resident who lives down the street from Wilburn, Josie Martinez, said two men running through the neighborhood stopped her and begged for a ride while she was getting into her vehicle.

‘I was getting in my car and they asked me if I could please give them a ride to a motel or somewhere and I told them I’m sorry, I can’t,’ Martinez detailed to NewsNation. 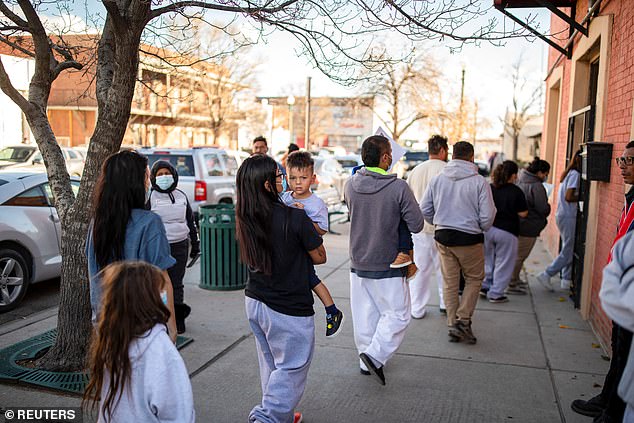 Residents of El Paso are expressing growing concern about migrants running through their neighborhoods and sleeping on their streets. ‘This has never happened before. Never. I feel very unsafe and not secure at all here,’ El Paso resident Carmen Wilburn told NewsNation 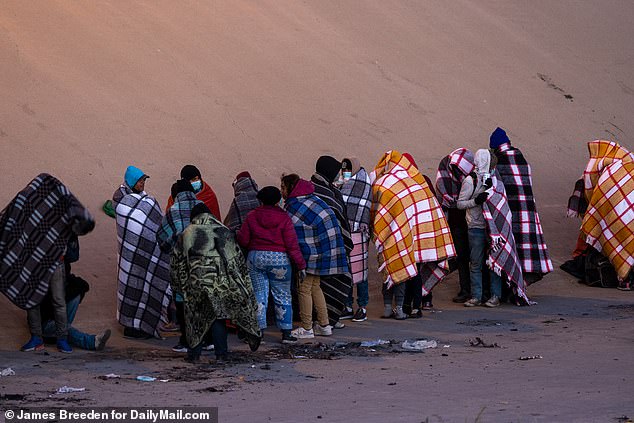 A dashboard maintained by the city of El Paso shows that more than 5,100 migrants were held in the Border Patrol Central Processing Center in the Texan city as of Sunday. The facilities, according to National Border Patrol Council President Brandon Judd, are only designed to hold up to 1,500 migrants.

Immigration officials released 1,744 migrants in El Paso on Saturday and Sunday, the dashboard reveals. Of those released, 611 were left on the streets in Downtown El Paso after shelters run by NGOs in the area also ran out of bed space and became overcrowded.

Critics are sounding the alarm after Alejandro Mayorkas’ visit to El Paso didn’t include a survey of the inundated border crossing areas or parts of the city where migrants are sleeping on the streets due to massive overcrowding in shelters.

While the Department of Homeland Security (DHS) secretary did visit with Border Patrol agents and officials in El Paso, he did not take a look at that dire situation for which Republicans claim he is responsible.