Street gangs in El Salvador that have extorted and killed innocent countrymen have now taken it upon themselves to ensure that everyone adheres to a national quarantine order amid the coronavirus pandemic.

In recent years, more than 100,000 Salvadorans have been displaced from their homes and forced to flee the Central American nation due to the constant menace they have faced from street gangs.

The very same tactics employed to intimidate business owners are being carried out to enforce social distancing after the country decreed a 30-day lockdown March 22, the Los Angeles Times reported.

The gangs have sent out videos showing masked members hitting people for breaking the quarantine order.

The Los Angeles Times reported gangs in El Salvador are making sure residents in towns they control are following the rules set under a nationwide quarantine that imposed March 22 to stem the flow of the coronavirus pandemic. (Pictured above is file image of a local MS-13 at a jail in El Salvador) 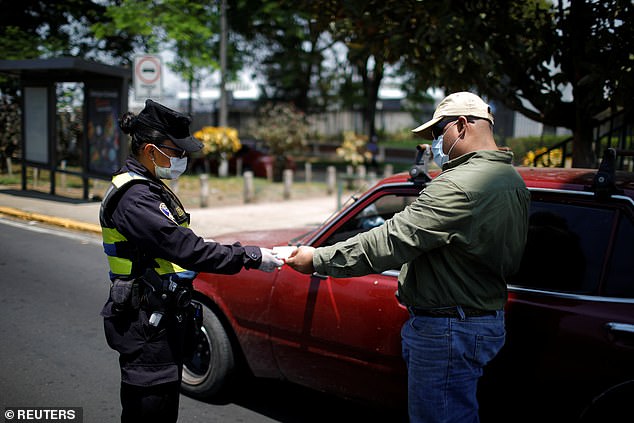 A policewoman (photographed April 7 in a file image) asks a driver in El Salvador for documents and authorization to travel at a checkpoint as part of the nationwide quarantine that has been in place since March 22 due to the coronavirus. The Los Angeles Times reported El Salvador’s notorious gangs are enforcing the order with menacing tactics 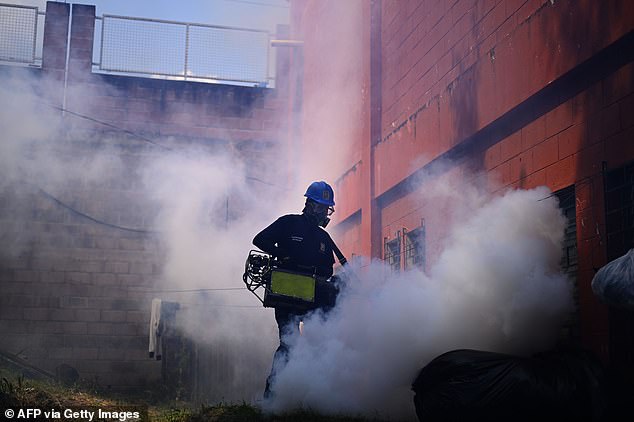 The gangs have also sent text message blasts with audio recordings that threatens anyone breaking the rules throughout the month-long curfew that permits only one person per family to leave their homes to shop.

Essential employees – government workers, doctors, infrastructure, energy, banks and restaurant workers, as well as journalists, the military, the police and food distributors – are also allowed to be out.

‘We don’t want to see anyone in the street,’ a recent recording said. ‘If you go out, it better be only to the store, and you better be wearing a mask.’

The gang members are mostly members of the Barrio 18 and MS-13 criminal organizations which are made up deportees from the United States. 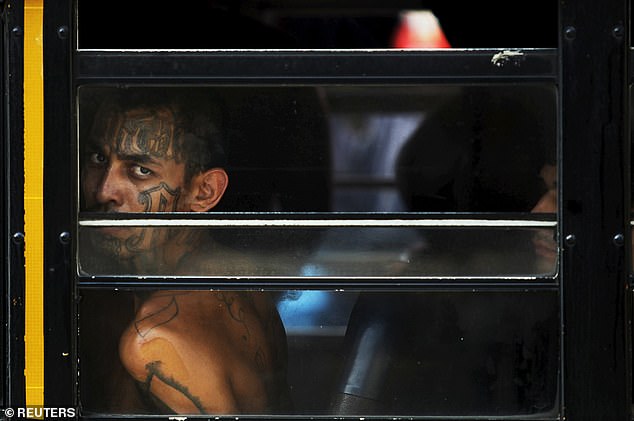 Gangs in some towns in El Salvador have stopped demanding extortion payment from business owners and taxi drivers as the local economy has been dealt a huge blow because of a stay-at-home order due to the COVID-19 epidemic. (Above is April 21, 2015 file image of a member of the Barrio 18 gang before arriving at a local jail)

Although these de facto enforcers have not announced a truce, the relative quietness in the streets produced a noticeable decline in murders in a country that for decades has ranked atop the world in per-capita killings.

Stats point that close to 500,000 people are directly connected to the vicious gangs that line their coffers by extorting money from small businesses as well as trafficking and selling drugs despite an all-out government effort to deploy soldiers throughout areas heavily infested with the dangerous groups.

Authorities saw a sharp drop in murders 114 in February to just 65 in March. And for the first time in recent memory, the nation did not report a homicide over two consecutive days. 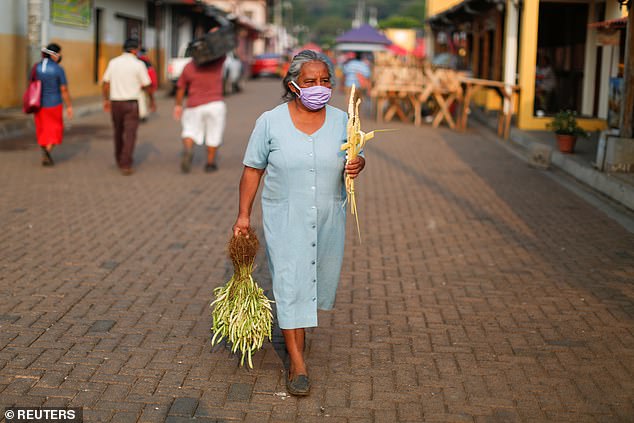 A woman  in Nahuizalco, El Salvador, walks to participate in a Palm Sunday’s procession amid a quarantine throughout the country. The stay-at-home order has been in place since March 22 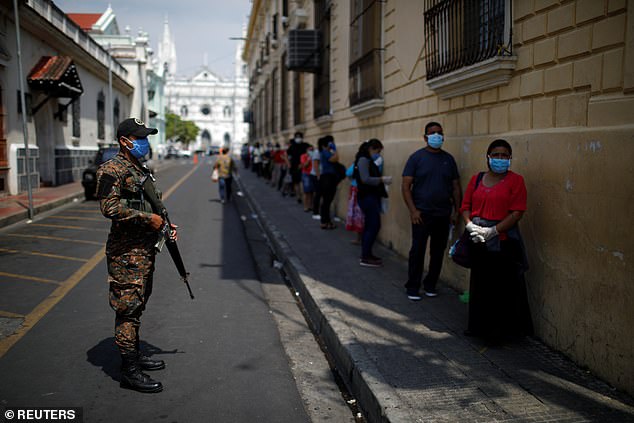 El Salvador has only reported five deaths and 103 confirmed cases related to COVID-19. The pandemic has killed more 89,000 and infected nearly 1.5 million throughout the globe. (Image above was taken April 7)

While the Salvadoran government would welcome with an open arm the reduction in killings, matters could be even far worse if the coronavirus epidemic engulfed a country of 6.3 million that is beset in poverty and low investment in public health.

The pandemic has killed more than 89,000 people and infected nearly 1.5 million worldwide, but has only killed five people in El Salvador with 103 confirmed infections.

And the visible gang presence certainly deters anyone from wandering in the streets for no reason. 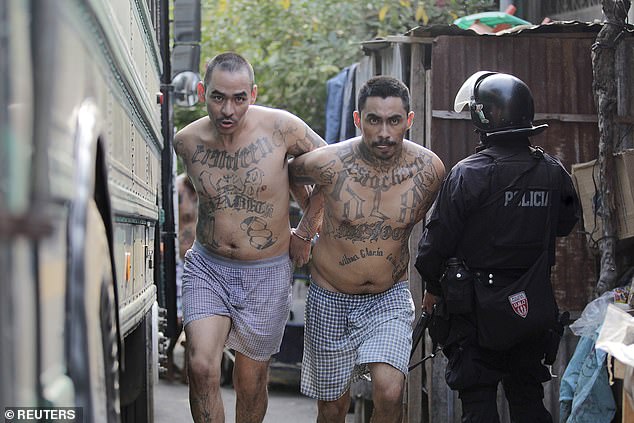 A resident in San Salvador, El Salvador, said he expects gangs to resume their extortion tactics once the quarantine ends. (The above image of members of the Barrio 18 gang was taken April 21, 2015)

‘They said, ‘We don’t want the virus here,’ said a 25-year-old delivery driver identified only by his first name, Miguel.

‘People are not afraid of the police, but of the gang,’ he said.

But one San Salvador resident said it is only a matter of time before men from an offshoot of the Barrio 18 gang will return to collect extortion fees from small business owners and taxi drivers, who have received a pass due to the economic crisis caused by the global virus.

‘Once the quarantine ends, they’ll have to pay what they owe,’ said a barber in the neighborhood, who asked to be identified only by his first name, Rafael. ‘I think that homicides are going to increase after the quarantine because the gang is not going to forgive the debt, and they are going to kill whoever does not pay.’