El Salvador has started mining bitcoin using energy from a volcano, according to President Nayib Bukele.

The former businessman, who was elected in 2019, tweeted early Friday morning that the country had successfully mined 0.00599179 bitcoin, or about $269, with geothermic power.

Bukele’s announcement comes just a few weeks after bitcoin became accepted as legal tender in the country on September 7.

El Salvador is known colloquially as the ‘land of volcanoes,’ with 20 potentially active volcanoes that run the length of the country.

The Central American country receives more than 20 percent of its total energy from geothermal sources, according to the U.S. International Trade Association.

El Salvadoran president Nayib Bukele announced Friday that the country had already successfully mined 0.00599179 bitcoin, or about $269, energy from a volcano

On September 6, one day before it legally adopted the world’s most popular cryptocurrency, El Salvador bought 400 Bitcoin worth about $20.9 million.

The following day, when the policy went into effect, the price of bitcoin plummeted to its lowest in nearly a month, from $52,000 to less than $43,000. 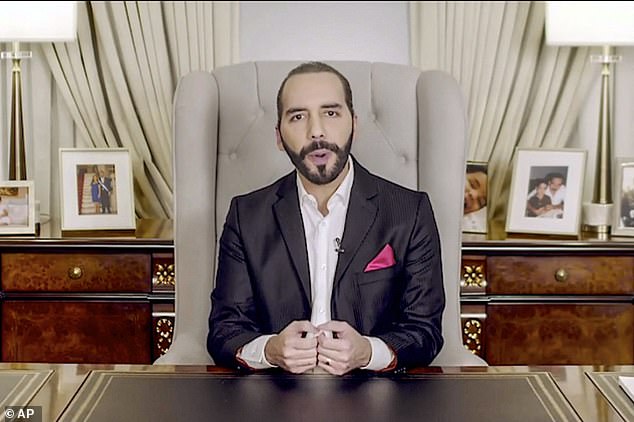 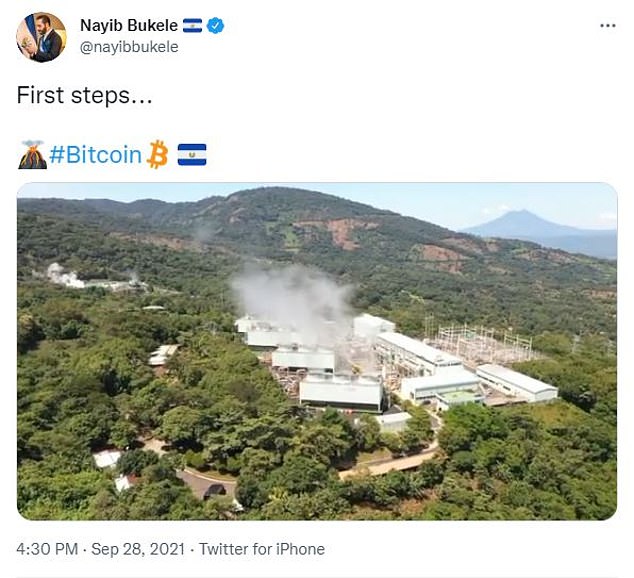 He tweeted that LaGeo SA de CV, the state-run geothermal electric utility, had been instructed to develop a plan for bitcoin-mining operations ‘ with very cheap, 100% clean, 100% renewable, [zero]-emissions energy from our volcanos.’

Bukele’s bill was quickly approved by the Legislative Assembly three days after he introduced it.

Athena Bitcoin has agreed to invest $1 million dollars to install 1,500 cryptocurrency ATMs, which can exchange bitcoin for US dollars or vice versa, but Apple and Huawei are not offering the government-backed digital wallet, Chivo, in their app stores, The BBC reported. 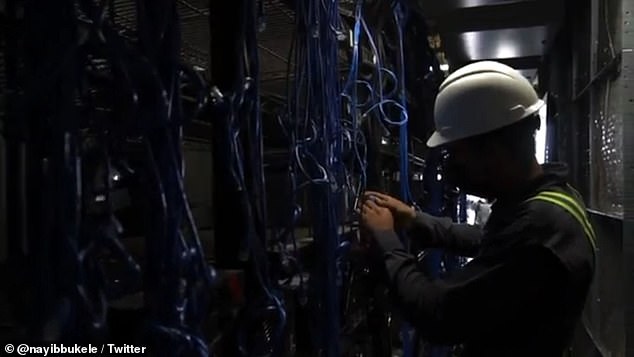 Bukele’s announcement comes just a few weeks after bitcoin became accepted as legal tender in the country on September 7. Pictured is the bitcoin mining center in El Salvador 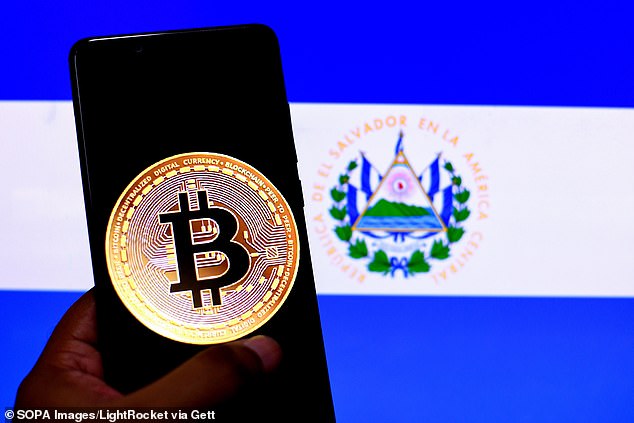 While El Salvador is leaning into bitcoin-mining as an economic miracle, scientists and the World Bank have raised concerns about the environmental impact of the energy-intensive industry

‘We are committed to helping El Salvador in numerous ways including for currency transparency and regulatory processes,’ a World Bank spokesperson told Reuters.

‘While the government did approach us for assistance on Bitcoin, this is not something the World Bank can support.’

Purchasing with bitcoins and other cryptocurrencies, which exist digitally through encryption, requires large amounts of electricity.

Around the world warehouses, or ‘farms,’ are crammed with these toaster-sized processors, running day and night.

Those farms produce as much carbon dioxide per year as all the cars in the UK combined, enough to raise global temperatures 3.6F within the next 15 years, according to a 2018 study from the University of Hawaii

That’s enough to bring catastrophic droughts, flooding, and storms to regions across the globe. 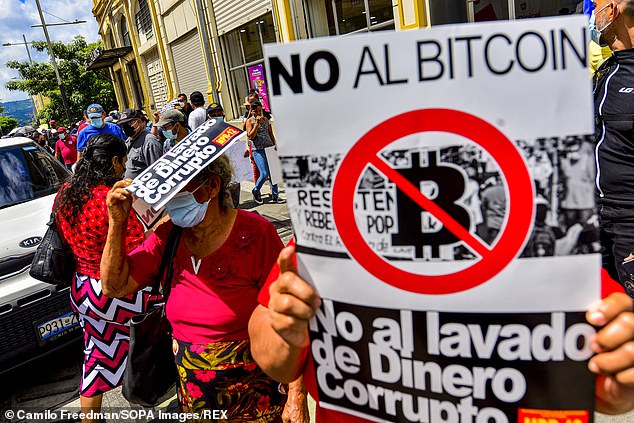 ‘We cannot predict the future of Bitcoin, but if implemented at a rate even close to the slowest pace at which other technologies have been incorporated, it will spell very bad news for climate change,’ co-author Camilo Mora said in a statement at the time.

‘Clearly, any further development of cryptocurrencies should critically aim to reduce electricity demand, if the potentially devastating consequences of 2°C of global warming are to be avoided.’

El Salvador is not the first country to use geothermal energy to power bitcoin mining: ‘Iceland has been doing it since the very, very beginning of bitcoin mining,’ miner Alejandro de la Torre told CNBC.

But according to a recent report in the journal Resources, Conservation and Recycling, high energy costs aren’t the only issue with bitcoin mining: A single transaction generates 9.5 ounces of e-waste, the same as throwing away two smartphones.

Because of the high demands on computers that mine for Bitcoin, the devices have an extremely short shelf-life— just 1.29 years.

That makes for a lot of garbage—about 33,800 tons a year, which could likely increase as interest in cryptocurrency rises.

WHAT IS A BITCOIN? A LOOK AT THE DIGITAL CURRENCY

What is a Bitcoin?

Bitcoin is what is referred to  as a ‘crypto-currency.’

It is the internet’s version of money – a unique pieces of digital property that can be transferred from one person to another.

Bitcoins are generated by using an open-source computer program to solve complex math problems. This process is known as mining.

Each Bitcoin has it’s own unique fingerprint and is defined by a public address and a private key – or strings of numbers and letters that give each a specific identity.

They are also characterized by their position in a public database of all Bitcoin transactions known as the blockchain.

The blockchain is maintained by a distributed network of computers around the world.

Because Bitcoins allow people to trade money without a third party getting involved, they have become popular with libertarians as well as technophiles, speculators — and criminals.

Where do Bitcoins come from?

The rewards are cut in half at regular intervals due to a deliberate slowdown in the rate at which new Bitcoins enter circulation.

Who’s behind the currency?

Bitcoin was launched in 2009 by a person or group of people operating under the name Satoshi Nakamoto and then adopted by a small clutch of enthusiasts.

Nakamoto dropped off the map as Bitcoin began to attract widespread attention, but proponents say that doesn’t matter: the currency obeys its own, internal logic.

Dr Craig Wright was suspected as the creator following a report by Wired last year and he has now confirmed his identity as the cryptocurrency’s founder.

What’s a bitcoin worth?

Like any other currency, Bitcoins are only worth as much as you and your counterpart want them to be.

In its early days, boosters swapped Bitcoins back and forth for minor favours or just as a game.

As the market matured, the value of each Bitcoin grew.

Is the currency widely used?

Businesses ranging from blogging platform WordPress to retailer Overstock have jumped on the Bitcoin bandwagon amid a flurry of media coverage, but it’s not clear whether the currency has really taken off.

On the one hand, leading Bitcoin payment processor BitPay works with more than 20,000 businesses – roughly five times more than it did last year.

On the other, the total number of Bitcoin transactions has stayed roughly constant at between 60,000 and 70,000 per day over the same period, according to Bitcoin wallet site blockchain.info.

Is Bitcoin particularly vulnerable to counterfeiting?

The Bitcoin network works by harnessing individuals’ greed for the collective good.

The blockchain prevents rogues from spending the same bitcoin twice, and the miners are rewarded for their efforts by being gifted with the occasional Bitcoin.