Elderly care home residents are essentially being left to die from coronavirus by ‘ageist’ GPs, warned the chief of Care England.

Professor Martin Green, chief executive of the UK’s independent social care service, alleged one doctor wrote to a home refusing to visit pensioners, saying they will not be admitted to hospital amid the pandemic.

He claimed it was an individual case, but expressed concern over the letter showing a wider culture of ageism in Britain.

Elderly care home residents are essentially being left to die by ‘ageist’ GPs amid the coronavirus pandemic, according to the chief of Care England (file photo)

Professor Green told The Daily Telegraph: ‘We’ve seen some ageist behaviour from GPs who, for example, have said to some care homes “Well, first of all, I’m not coming in, and secondly we are not going to send anyone to hospital.”‘

He said the practitioner was reported and spoken to, but does not believe they were disciplined.

But sources linked to NHS England reportedly described the claim as ‘fundamentally wrong’.

It follows 15 residents at a single care home dying from coronavirus in less than a week, after its manager told families no cases had been diagnosed.

The deaths at Castletroy Residential home in Luton, which has 69 beds for elderly people with nursing or personal care needs, were announced by Public Health England on Wednesday. 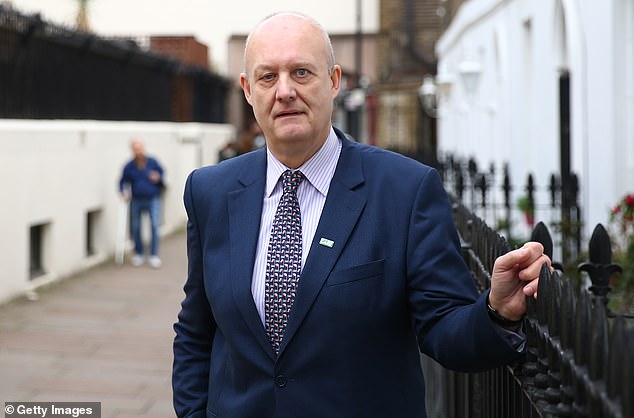 Professor Martin Green (above), chief executive of Care England, alleged one doctor wrote to a care home refusing to visit and saying they will not be admitted to hospitals

Five of those who died have confirmed positive with Covid-19. It comes after the deaths of eight residents at a care home in Dumbarton and 12 at another in Cranhill, Glasgow.

The UK announced 887 more deaths from coronavirus yesterday, taking the total of fatalities to 7,984.

Cllr Hazel Simmons, Leader of Luton Council, said: ‘We are all so desperately sad to hear about the tragic situation at Castletroy Residential and Nursing Home. To lose so many residents in one care home is heart-breaking and our love, thoughts and prayers are with the friends and families of those who have died, as well as the staff at the home.

‘The council are supporting the staff at the home and will be offering support to the relatives of all those affected during this very difficult period.

‘This tragedy serves as another reminder of how important it is that we all follow the government guidance and stay at home to prevent the spread of this deadly disease.’