A damning report has laid bare how banks are betraying elderly customers by closing branches and forcing them online.

Many older people who do not feel safe using the internet are left unable to do their everyday banking.

They can also find the branches that are still open stressful and overwhelming, watchdog the Financial Conduct Authority said yesterday. Branches are often noisy with no private areas to talk to staff which can leave customers confused.

The FCA also raised concerns that the reflective Perspex screens and stark lighting make it difficult for elderly customers with bad eyesight to see properly and can disturb people with dementia.

Unfriendly and impatient staff can make customers feel rushed and there is often a lack of clear direction for customers on where they need to queue, it added.

Customers also reported difficulties when they tried to call their bank because there are too many options and they are not put through to someone local.

Older customers say they are made to feel rushed and struggle to hear or understand the call handler, the report added.

The FCA warned banks to improve their services for the elderly or face a crackdown.

Last night Martyn James, a consumer campaigner, said: ‘If we’re not careful, we’re in danger of sleepwalking into a society where older people are excluded from the dignity of managing their own finances by computers, call centres and a lack of humanity.’

It also said that staff should be trained to recognise when customers are having difficulties and refer them to a specialist team if appropriate. And they need to better support customers in using new forms of technology.

The number of bank branches in the UK has halved since 1989. Cash-strapped banks are instead pushing customers to bank online or via a mobile phone app. But many older customers are uncomfortable with these. 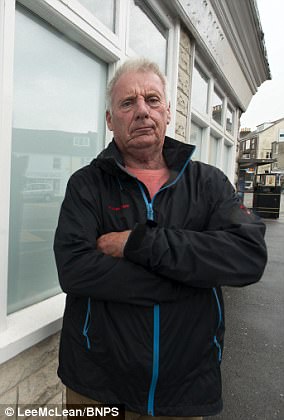 Jim Draper (pictured) said: ‘It’s hard for small businesses. Banks are there to sell products now, not to service people’

Families face being cut off from their nearest bank by the sea after their last branch shut its doors.

The closure of Lloyds in July means shopkeepers, small business owners, families and the elderly on the Isle of Portland in Dorset must drive miles into Weymouth, crossing the sea on a causeway which is sometimes shut by flooding.

The island is one of dozens of communities to be abandoned by big banks as they rush to cut costs.

More than ten branches a week are shutting this year, on top of 1,000 closed in 2015 and 2016 by the big five lenders Barclays, HSBC, Lloyds, Santander and NatWest owner Royal Bank of Scotland.

Until recently Portland had three banks, but Barclays and NatWest have gone. Councillor Jim Draper said: ‘It’s hard for small businesses. Banks are there to sell products now, not to service people.’

Although there is still a Post Office for basic banking, Mr Draper said few people were willing to use it as they could not get the same level of service.

Lloyds said it closed its Portland branch because it was being used less often, and customers had been told of other ways to complete their banking needs.

The regulator also highlighted how older customers struggle when using cash machines because the instructions change too quickly.

It raised concerns that more than a third of customers aged 85 and over (37 per cent) had told a family member or friend their Pin or password so they could withdraw cash and do their shopping.

But by doing this they are breaching their bank’s terms and conditions so if they fall victim to fraud they will have difficulty getting their money back. The FCA said it was vital banks introduce a simpler way to set up a third-party arrangement so family members can help older relatives.

Banking industry trade body UK Finance said it would engage with the FCA on the issues raised in the report and it plans to introduce a solution to help families looking after older relatives’ finances next year.