An elderly veteran who made an emotional speech at a protest against vaccine mandates says the time has come to ‘fight oppression’ in Australia, as its revealed he was locked out of an Anzac Day service earlier this year.

John Murphy was cheered loudly by the thousands of protestors who turned out in Melbourne on Saturday to oppose mandatory Covid-19 vaccinations and proposed new state government powers.

Mr Murphy, wearing an army hat and service medals, was helped up on stage during towards the end of the rally at Flagstaff Gardens in the city.

‘I hope that I’m representing all of our past diggers,’ he told the crowd.

‘Australia has been willing to send troops to all parts of the world to help people become free where they might have been under oppression over the past 100 years or more, and to now be fighting oppression here in our own country is saddening.

‘I want to call on all former servicemen, former policemen, who have sworn an oath to Australia to stand up to those who are oppressing us again today.’

John Murphy, from Bundoora in Victoria, said he was ‘representing all of our past diggers’, was cheered loudly by the thousands of protestors who turned out in Melbourne on Saturday 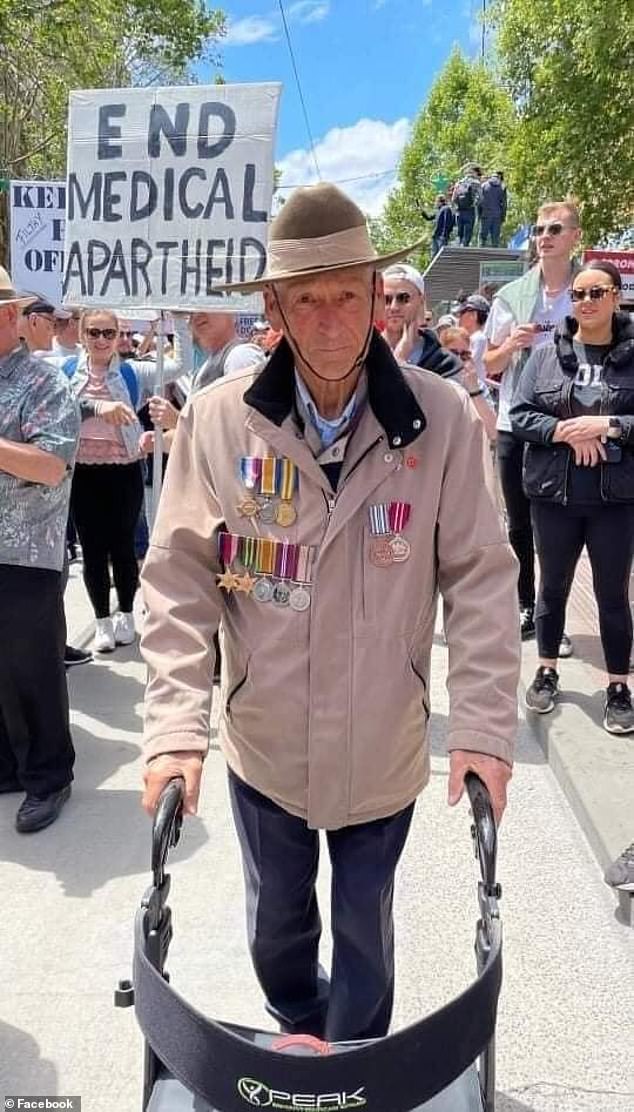 A report in The Australian in April revealed Mr Murphy, from the Melbourne suburb of Bundoora, did two years of compulsory national service from 1969 but did not go to  the war in Vietnam.

‘Thank you John for all your sacrifices for our freedoms,’ Senator Rennick posted on his Facebook page.

‘Thank you for your service, sir,’ Mr Christensen posted.

‘It breaks my heart that you are still having to fight for our freedoms,’ one person wrote, a theme common to many of the online comments about Mr Murphy’s speech.

On Anzac Day in April this year, Mr Murphy voiced his opposition to Covid restrictions on who could attend Anzac Day services at the Shrine of Remembrance .

Instead, the 72-year-old Mr Murphy stood with his mobility walker behind a wire fence to watch the 1400 people who were able to attend the service. He told The Australian he didn’t believe the event should have been ticketed.

‘I would prefer to be on the outside of a fence, and be free to do that, than have to apply for a ticket,’ he said.

‘Had there been enough of us, we would have pushed the bloody (fence) over but there wasn’t even enough on the outside to do it.’ 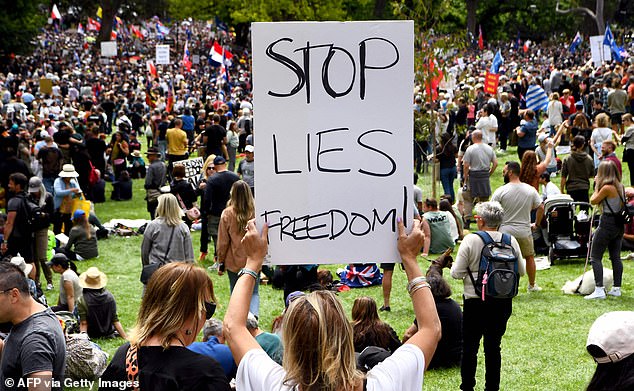 The march and rally on Saturday in Melbourne, Victoria was one of the largest yet seen protesting government responses to the pandemic 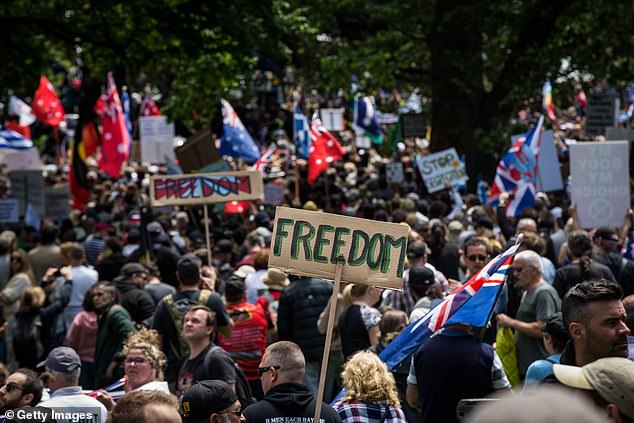 The march started at Victoria’s state parliament and made its way down Bourke to Flagstaff Gardens, with protestors carrying a range of placards decrying mandatory vaccinations and Victoria’s pandemic bill 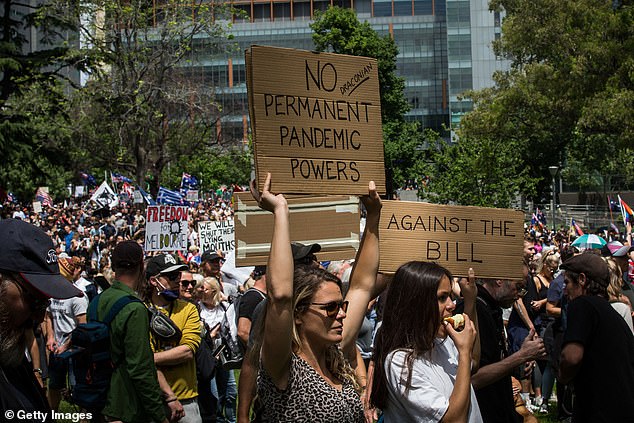 Saturday’s protest followed a controversial demonstration the previous weekend in which protestors marched through the CBD and displayed a model gallows with nooses, chanting ‘hang Dan Andrews’

The march and rally on Saturday was one of the largest yet against the  government responses to the pandemic.

The march started at Victoria’s state parliament and made its way down Bourke Street to Flagstaff Gardens, with protestors carrying a range of placards decrying mandatory vaccinations and Victoria’s pandemic bill. Many protestors shouted ‘kill the bill’ and ‘sack Dan Andrews’.

Saturday’s protest followed a controversial demonstration the previous weekend in which protestors marched through the CBD and displayed a model gallows with nooses, chanting ‘hang Dan Andrews’.

On Monday evening last week, protestors out the front of the Victorian parliament also conducted a mock execution of Premier Dan Andrews, using a wooden gallows mounted on the back of a work ute.

Prime Minister Scott Morrison was asked repeatedly to denounce the actions of the protestors last week after he was accused of remaining silent on the issue for a number of days.

‘I completely and totally and continue to denunciate any violence, any threat, any intimidation,’ he said on Friday.

‘Governments have to start letting go of all of the controls on people’s lives.’ 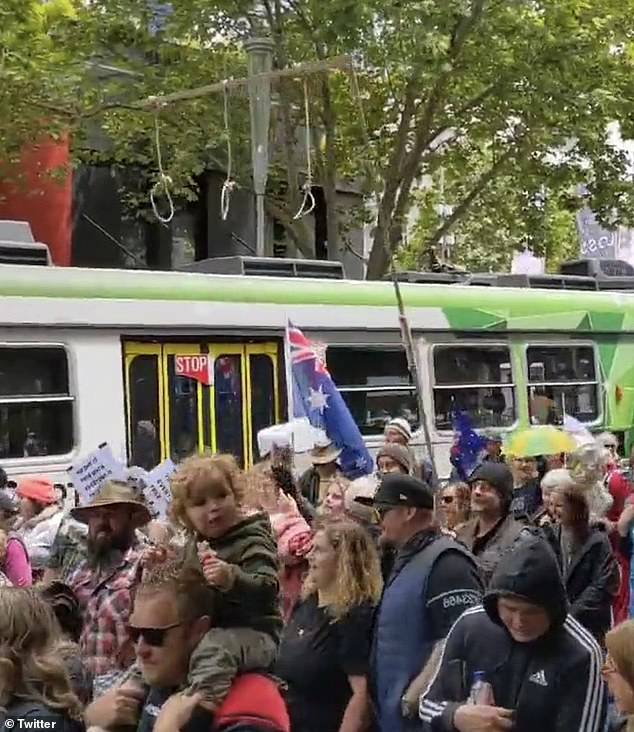 A controversial demonstration in Melbourne on November 13 saw protestors march through the CBD, with one displaying a model gallows with nooses

In response to those governments, Mr Andrews said the Prime Minister was pandering to extremists.

The new laws proposed by Mr Andrews’ government have passed Victoria’s lower house but are held up in the upper house.

The legislation would give the premier the power to declare a pandemic for an unlimited period of time even if there are no cases of a virus.

The laws are designed to approach the ‘state of emergency’ declarations under which Victoria operated during the pandemic.

The government is attempting to pass the bill before the current state of emergency ends on December 15.