A mother was reduced to tears after an elderly stranger returned to give her baby a Christmas present – six months after knocking on her door to get directions.

Robyn Gordon, from Pemberton, Greater Manchester, answered the door during summer to find a ‘little old man’ who was lost trying to find the address of a friend on her street.

The man, known only as Ray, aged around 70, and believed to be a former teacher, asked to see Ms Gordon’s baby before going on his way.

But Ms Gordon was left in ‘floods of tears’ when Ray returned out of the blue months later and posted an envelope through her door. 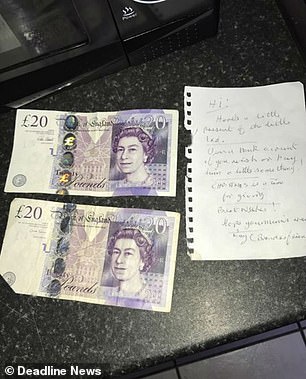 Robyn Gordon (left), from Pemberton, Greater Manchester, received money and a handwritten note (right) for her son LJ (left) from an elderly man who had visited her month ago asking for directions

The mother-of-one was shocked to find £40 cash and a hand-written note telling her to get something for her son 11-month-old son LJ.

Ms Gordon posted on Facebook: ‘About 5/6 months ago a lil old man was looking for a house number so I helped him and showed him where it was.

‘He wanted to look at the baby so I showed LJ to him, he absolutely loved him.

‘He’s just knocked on my door to see how he was doing! What an absolute gentleman!

‘He took his hat off when I answered the door and said I’m just wondering how the little man is doing you might not remember me but I’ve been thinking about him.

‘This fella is called Ray, roughly around 70 years old and he’s an absolute gem! 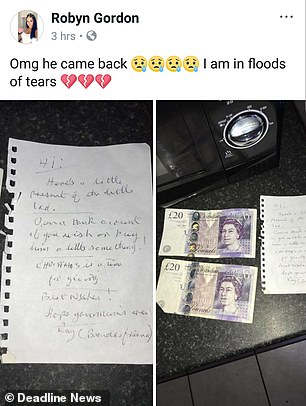 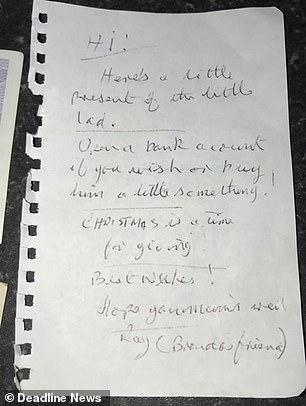 The mother-of-one was reduced to tears after finding inside £40 cash and a hand-written note telling her to get something for her son, LJ, 11 months

‘I’m sat crying of how thoughtful, he gave me a kiss on the cheek and said I hope you are keeping well and have a Merry Christmas.’

Ray returned a little while later, put his envelope through the door, and walked away.

Ms Gordon posted an image of the note, which read: ‘Hi. Here’s a little present to the little lad. Open a bank account if you wish or buy him a little something!

‘Christmas is a time for giving. I hope your mum is well. 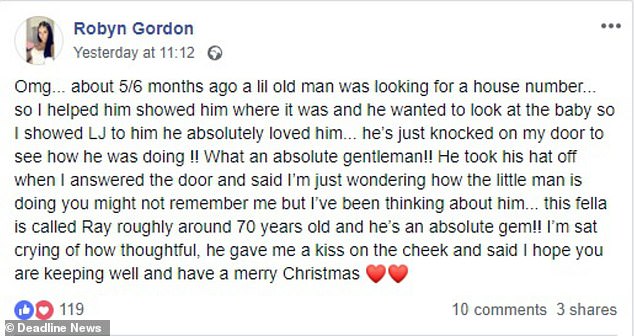 Ms Gordon posted on Facebook: ‘About 5/6 months ago a lil old man was looking for a house number so I helped him and showed him where it was.’

Robyn revealed that Ray went to a neighbour in the street to get an envelope so that he could post his gift.

Ms Gordon said: ‘I was sat on my couch and I saw his hand come through my letterbox and drop the envelope. He knocked on the door and walked away.

‘I’ve opened the envelope and I was in shock as I just saw the money and thought someone must have got the wrong address.

‘I read the letter that he had wrote and I broke down into tears.

‘I’ve been going through a hard time and this really touched me of how thoughtful he could be to my son.’

Reacting to the posts online, one Facebook user said: ‘There are some wonderful people out there old school who join in others lives for the better. So happy for LJ.’

One user commented: ‘I remember him. I was talking to him, he was looking for a lady in your row. Think he said he used to be a teacher.’

Another user wrote: ‘Aw how lovely. It’s nice to be nice.’