Elderly busker, 85, who lost use of both her legs blows away nurses in hospital after staff give her a keyboard to play on – but there’s a tragic story behind her incredible piano skills

An elderly pianist with limited use of her legs has wowed nurses in Royal Melbourne Hospital with her talent on a keyboard.

Natalie Trayling has been a popular busker on Melbourne’s streets for more than 20 years.

The 85-year-old is often seen playing incredible classical renditions of famous pieces on various pianos around the city or on her keyboard on the street for pedestrians.

Ms Trayling loves performing for strangers and views music as a way to express herself, opting to showcase her talent on the streets instead of in concert halls and ticketed events.

The classically trained pianist was admitted to hospital in June for two weeks suffering severe anaemia and having lost the use of her legs.

Ms Trayling didn’t let her conditions stop her desire to play, producing an immaculate performance for doctors and nurses in the hospital on a keyboard set up by the hospital’s music therapist.

‘I could barely walk to get there, but it was very comfortable sitting on the chair, and felt really good with my fingers playing,’ she told ABC. ‘It just felt so good.’

Ms Trayling was born in Western Australia and fell in love with music at age 5 after hearing the composition ‘good night mister moon’.

She took piano lessons at school before following an entertainment troupe through to Tasmania before settling in Melbourne.

After the piano she was playing in a shop in Brunswick was sold, Ms Trayling began her quest to play on instruments in various hotels and chambers throughout the city.

‘As I felt like playing, I just walked four or five kilometres to the city of Melbourne and I saw someone in Bourke St Mall. I said, “Is there a piano here?” They said, “there’s one in David Jones”…and off I walk there, and that was the beginning,’ she said.

Behind the frail woman’s impressive renditions of Beethoven, Rachmaninov and her own breathtaking compositions lies a heartbreaking story. 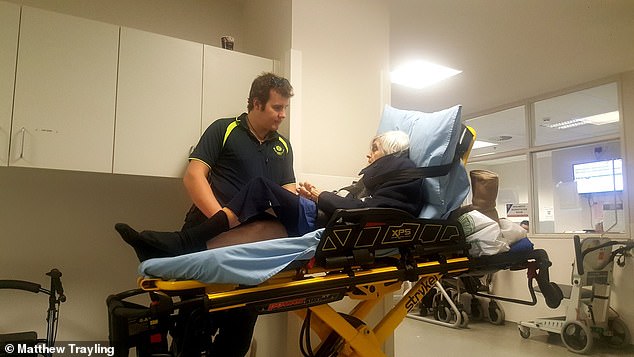 The piano virtuoso has lived through the deaths of both of her daughters, bouts of homelessness, a marriage breakdown and dealt with her son’s substance abuse.

Ms Frayling spent nine years living on the streets, which she said gave her great freedom, and never considered herself as being homeless.

‘I sat on the bench out in the open on the street and I thought, “I’m home already. This is home. I’m home wherever I am”,’ she said.

Ms Frayling’s Youtube account, run by son Matthew, has amassed thousands of followers, and her videos are watched by millions.

She can only perform when Matthew is available to help her transport her heavy equipment, but not lately due to the coronavirus pandemic and doing rehabilitation on her legs.

Ms Frayling said she is in no rush to get back on the streets and perform even though she still gets a lot of pleasure out of her musical expression.

‘I’ve got to the stage right now that I’m just going along with as things be and as they are. And really I feel very content and at peace,’ she said. 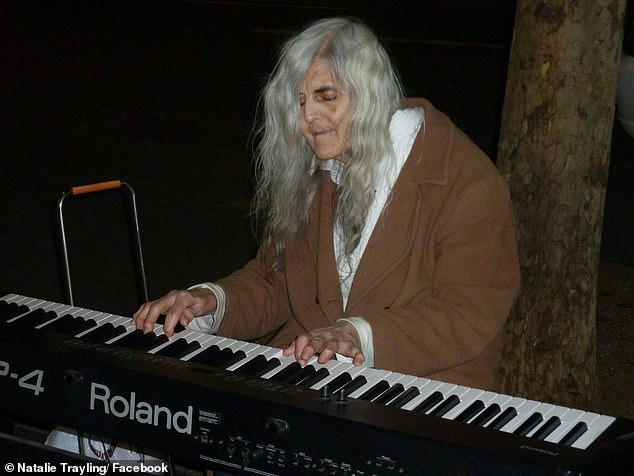