Elderly woman has a tumour TWICE the size of her head

By Claudia Tanner For Mailonline

An elderly woman who had simple surgery to remove a mole on her face now has a tumour twice the size of her head.

Teresita Briones, 79, visited her doctor five years ago to have the small blemish on her right cheek removed in what should have been a straight-forward procedure.

But she began to suffer complications within a few moths of the short operation in Iligan City, Philippines, and the area became painful.

Her jaw began to swell and by the end of 2012 a large bulge had started to appear under the skin which doctors told her would subside.

But the tumour continued to grow and after having it checked by medics they told her it was benign.

Teresita refuses to have an operation ‘in case she didn’t wake up after’ and chose instead to spend her money on food.

Teresita Briones, from Iligan City, Philippines, began to suffer complications after she had a small blemish on her cheek removed 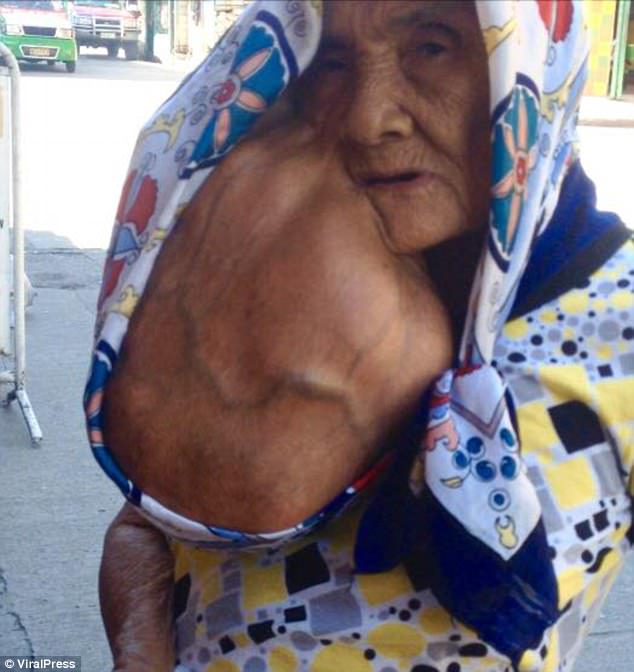 The exact cause of a benign tumour is often unknown.

It develops when cells in the body divide and grow at an excessive rate.

Typically, the body is able to balance cell growth and division. When old or damaged cells die, they are automatically replaced with new, healthy cells.

In the case of tumours, dead cells remain and form a growth known as a tumor.

Cancer cells grow in the same manner. However, unlike the cells in benign tumors, cancerous cells can invade nearby tissue and spread to other parts of the body.

Whether benign tumours need treatment depends on how bothersome they are.

The spinster now carries the enormous tumour round with her as she begs for money from passers-by in the poverty-stricken country.

Local resident Henry Santos, 24, said: ‘She’s old but I don’t think it’s too late for her. Our elders deserve to have a good life when they are retired.

‘She could live until she’s 90. I feel sorry for her to have to walk around with this. It looks hard for her and she has a hunched back because of the weight.’

Kunz Paz, who spoke with the woman, said: ‘She has no money and I gave her a little bit to help her. I’m not sure if her tumour could be operated on, but she said she would not want to anyway. She is afraid she might never wake up.

‘If there is a chance that anybody can help her, I am praying it is so. I hope we can make it a better Christmas this year for her.’