‘They can rot in hell, they can go to jail’: Elderly woman’s defiant message to armed gang that broke into her home in case of mistaken identity

An elderly woman who was roughed up by a gang of armed men that broke into her home says she hopes the trio are caught and ‘rot in hell’.

June McConnell, 76, was inside her Wavell Heights home, Brisbane, when three men wielding hammers and a tomahawk smashed through her front door on Friday night.

The pensioner’s 87-year-old husband was in the shower at the time of the wild break-in, which police later clarified was a case of mistaken identity.

Mrs McConnell told 9 News the men demanded to know where ‘Seb’ was and proceeded to smash up furniture and belongings inside her home.

A man has been charged in relation to a violent home invasion which left June McConnell, 76, (pictured) and her 87-year-old husband scared for their lives in a case of mistaken identity 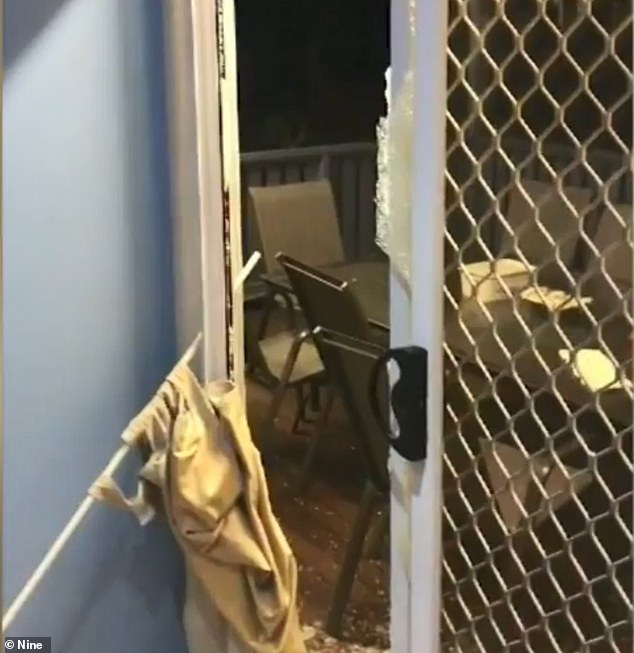 At about 6.30pm three men smashed through their back door (pictured) armed with hammers and a tomahawk before destroying everything in sight

CCTV footage captured the three men being dropped off  by a black sedan in the quiet street before making their way to Ms McConnell’s home.

‘I ran, I was screaming, I ran out onto the front steps just calling for help. Help! Help! Help!’ It was absolutely horrific, you have no idea,’ Mrs McConnell said.

‘They can rot in hell for me, they can go to jail.’

Police have confirmed the violent home invasion was a case of mistaken identity.

They said the three men were actually searching for Mrs McConnell’s next door neighbour who had moved away a little over a month before the attack.

After a public appeal for information, police arrested a 20-year-old man over the alleged break and enter.

The Deagon man was charged with enter dwelling with intent, wilful damage, possessing dangerous drugs and possessing a knife in a public place on Sunday.

Two of the three home invaders are yet to be charged or identified by police.

The 20-year-old man is due to appear in Pine Rivers Magistrates Court on Monday.

If you have any information that may help police with their investigation, contact Crime stoppers on 1800 333 000

A 20-year-old Deagon man was charged with enter dwelling with intent, wilful damage, possessing dangerous drugs and possessing a knife in a public place on Sunday as police continue to seek out the others