The Electoral Commission has earmarked more than £800,000 to run elections to the European Parliament next year despite Brexit.

The election watchdog admitted it was unlikely to ever run the polls because Britain is not supposed to ever elect MEPs again.

But it insisted that it had to prepare for the possibility of polls, which would have been due next spring if Britain had not voted for Brexit.

The 73 current MEPs are due to end their terms early on March 29 next year when the Article 50 process expires. Laws for new elections still need to be repealed.

The Electoral Commission has earmarked more than £800,000 to run elections to the European Parliament next year despite Brexit

After the £829,000 contingency plan was revealed, the Commission said: ‘A provision in our budget was made so that the commission has the necessary funds to deliver our functions at a European parliamentary election, in the unlikely event that they do go ahead.’

Adding that none of the money had been spent, the Commission added: ‘No money has been spent on preparing for European parliamentary elections in 2019 and the commission does not anticipate spending any money, pending the UK government repealing the necessary legislation.’

Any provision to go ahead with European elections will fuel fears among some Brexiteers that the Government and wider political establishment is not committed to delivering on the 2016 referendum.

Andrew Bridgen, Tory MP for North West Leicestershire, attacked the commission, which he claims has a pro-remain bias after four board members made public statements criticising the leave campaign or backing calls for the referendum result to be overturned. 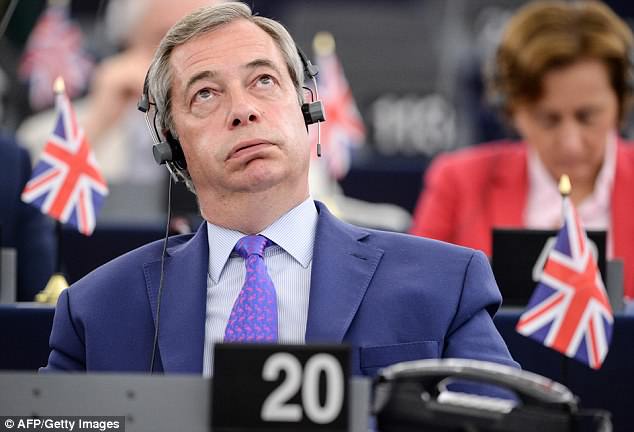 The 73 current MEPs – including Nigel Farage – are due to end their terms early on March 29 next year when the Article 50 process expires. Laws for new elections still need to be repealed

He told the Sunday Times: ‘Members serving on the board of the Electoral Commission have made no secret of their contempt for Brexit.

‘Are we to believe it’s an accident that it has budgeted for next year’s European parliament election with the support of the Speaker, John Bercow, who is a staunch remainer?

‘Unfortunately Bercow has been given the opportunity to waste a huge amount of taxpayers’ money by the government’s delay in dealing with the House of Lords wrecking amendments to the EU withdrawal bill.

‘We need to reject the amendments and send the prime minister off to the June European Council summit with a strong Brexit mandate from parliament.’