Electric Bugatti hypercars are coming as it signs deal with Rimac

The new deal came as Rimac Automobili and Bugatti Automobiles announced the creation of new company called ‘Bugatti Rimac’ to combine their expertise in design, innovation and technology: with Porsche – part of the giant Volkswagen Group – having a significant holding and oversight.

The partners said Rimac and Bugatti were combining forces in ‘a historic new venture’ noting: ‘Rimac Automobili announces another major milestone in its history, as it combines forces with iconic automotive brand, Bugatti Automobiles, to create a new automotive and technological powerhouse.

‘In just 10 years, Rimac Automobili has progressed from one man garage start-up, to announcing a new company with one of the world’s most iconic car brands to create Bugatti Rimac LLC.’ 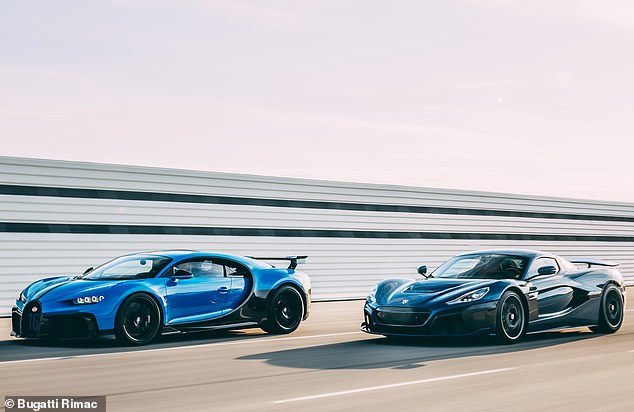 They said Bugatti Rimac represents the company that will ‘develop the future of both Bugatti and Rimac vehicles’ by joining resources and expertise in research and development, production and other areas.

It will begin trading as a new combined entity from last quarter of 2021.

Rimac Group will continue to innovate, creating both its own hypercars, as well as developing systems and technologies for many global companies. Such innovative technology can also be deployed in future Bugatti and Rimac models, it said

Both brands will also continue to operate independently, with Rimac Automobili retaining its current premises on the outskirts of Zagreb, Croatia and Bugatti production continuing in Molsheim, France.

As part of the deal, the group’s founder Mate Rimac will retain his original shareholding at 37 per cent, with Hyundai Motor Group also involved with a 12 per cent stake and other investors making up the 27 per cent remaining.

The development, production and supply of battery systems, drivetrains and other EV components will be separated into a new entity – Rimac Technology, which will be 100 per ceny owned by the Rimac Group. This Rimac Technology arm will remain an independent company working with many global car manufacturers.

As CEO of Rimac Group, Mate Rimac will run both Bugatti Rimac and the new division, Rimac Technology. 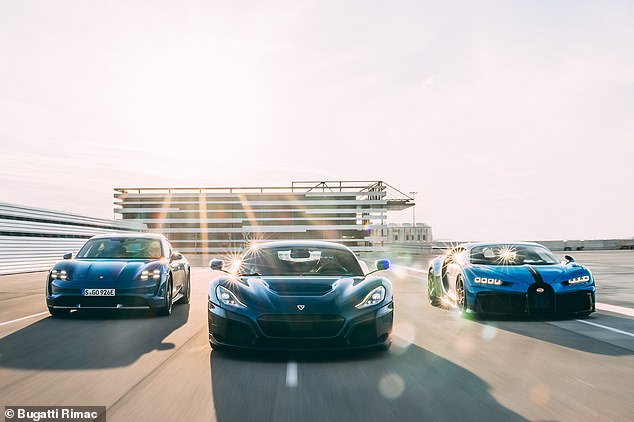 The new deal came as Rimac Automobili and Bugatti Automobiles announced the creation of new company called ‘Bugatti Rimac’ to combine their expertise in design, innovation and technology: with Porsche having a significant holding and oversight

The deal comes just a month after Rimac launched the fastest accelerating road-legal car in the world – the all electric Nevera.

It outpaces the mighty petrol-powered Bugatti Chiron hypercar. The scintillating new £2million, 258mph Nevera – formerly known as the C_Two concept – is designed, engineered and, as announced today, will be built by Croatian car company Rimac – the brand famed by The Grand Tour presenter Richard Hammond’s fiery crash in 2017 that catapulted the manufacturer into the headlines.

The Nevera can accelerate from rest to 60mph in a staggering 1.85 seconds – hitting 100mph from a standstill in a mere 4.3 seconds and 186mph (or 300km/hr) in 9.3 seconds – while producing zero tailpipe emissions. 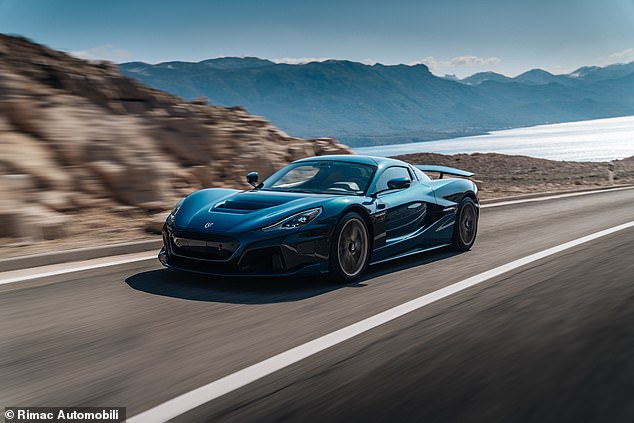 The £2million Rimac Nevera is the fastest-accelerating road car on the planet. It was revealed just last month. Rumours of a Bugatti and Rimac merger have been swirling for months 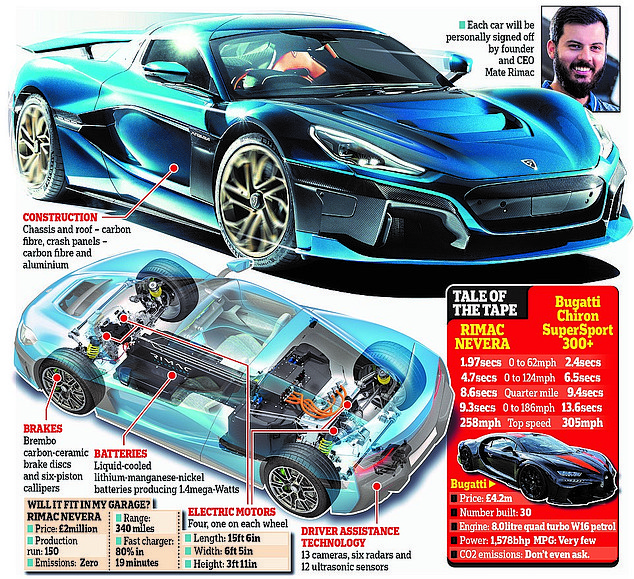 ‘We have gone through so much in such a short space of time, but this new venture takes things to a completely new level. ‘Rimac and Bugatti are a perfect match in terms of what we each bring to the table.

‘As a young, agile and fast-paced automotive and technology company, we have established ourselves as an industry pioneer in electric technologies.’

He added: ‘We have just launched our latest hypercar – the Nevera – to universal global acclaim. So I can’t begin to tell you how excited I am by the potential of these two incredible brands combining knowledge, technologies and values to create some truly special projects in the future.’

‘With the Nevera, we have also proven that we can develop and manufacture outstanding hypercars, that are not only fast, but also exciting and high-quality. Bugatti, with over a century of experience in engineering excellence, also possesses one of the most exceptional heritage of any car company in history.’ 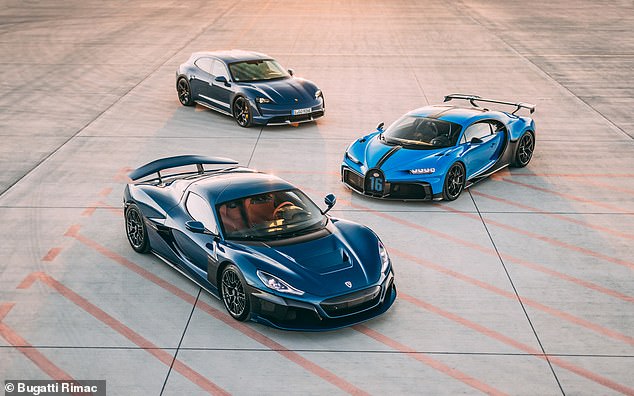 Although the Rimac Group will be majority shareholder with 55% stake, German giant Porsche is keeping its existing 24% shareholding in the Rimac Group and is acquiring a 45% stake in new company which will be led by Rimac founder Mate Rimac as chief executive officer

Oliver Blume, chairman of the executive board at Porsche AG said: ‘We are combining Bugatti’s strong expertise in the hypercar business with Rimac’s tremendous innovative strength in the highly promising field of electromobility.

‘Bugatti is contributing a tradition-rich brand, iconic products, a loyal customer base and a global dealer network to the joint venture. In addition to technology, Rimac is contributing new development and organisational approaches.’

Lutz Meschke, deputy chairman and board member for finance and IT at Porsche AG said: ‘We bought the first shares in Rimac three years ago and have successively increased them since then. This enabled us to build a close relationship with Mate and its highly innovative team at an early stage.

‘Now we are benefiting from this. Rimac is helping us with its know-how to successfully lead an emotional and important Group brand into the future. I am very proud and happy that we have brought this joint venture to the finish line despite numerous challenges. Today is a good day for Bugatti, Porsche and the entire Volkswagen Group.’

The company said that in time Bugatti Rimac’s global headquarters will move to the recently announced Rimac Campus on the outskirts of Zagreb, also serving as the home of Rimac Technology.

The £200milion, 100,000 square metre campus with room for 2,500 staff and due to open in 2023, will be the base for all research and development of future Rimac and Bugatti hypercars.

In March, Rimac announced it was setting up a research base in Warwickshire – next door to Jaguar Land Rover and Aston Martin. It plans to employ 30 staff there.