By Calum Muirhead City Reporter For The Daily Mail

Makers of electric cars are slowing down UK production as the vehicles are too expensive for many motorists.

The forecast means only a quarter of car output will be electric within the next two years, lower than prior forecasts of more than a third.

In its latest report, the Advanced Propulsion Centre, which provides taxpayer funding to makers of zero-emissions vehicles, said the ‘uncertain economy’ was expected to push drivers towards cheaper car models for a longer period.

It added that the phenomenon was not unique to the UK, with electric vehicle production across Europe predicted to be 12 million, 1 million less than previous estimates.

The slowdown comes as prospective buyers see their budgets hammered by the cost of living squeeze and inflation.

Declining production threatens to scupper a key government plan to cut greenhouse gas emissions, with the UK set to ban sales of new petrol and diesel cars by 2030.

The APC added a recovery in sales for 2030 was now ‘uncertain’ due to ongoing supply chain issues, particularly of lithium, a key ingredient in electric car batteries, as well as political tensions across the globe.

A production slowdown has already begun in the UK’s zero-emission car industry, with BMW announcing in October that it would stop production of the electric Mini at its plant in Oxford in order to ship the operation to China. And Jaguar has yet to provide further details on plans to become fully electric by 2025. 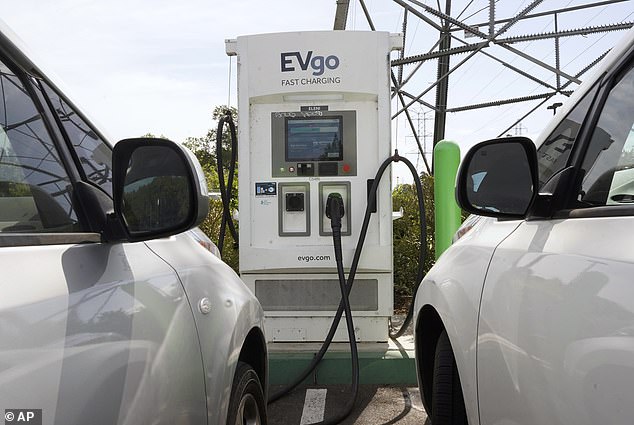 The forecast means only a quarter of car output will be electric within the next two years, lower than prior forecasts of more than a third

Concerns about costs were flagged earlier this week by the RAC, which revealed the average cost of charging an electric car had jumped by 58 per cent since last May.

Meanwhile, councils are plotting double digit rises in parking fees as they scramble for cash.

Charges will increase by around 10 per cent from April in areas including York, Southend, Thanet and Waltham Forest. An all-day ticket in Dudley will shoot up by 43 per cent to £5 and fees will rise by 29 per cent at the most popular sites in Cornwall, to £2.20 an hour.

Local authorities have defended the rises, saying they are under severe financial pressure, but others fear higher parking fees will hit town centre businesses.