The man who built the electric chair has expressed concerns that the device may malfunction if it is used in a death-row electrocution in Tennessee this week for the first time in over a decade.

Self-taught electrocution expert Fred Leuchter rebuilt Tennessee’s chair, which is scheduled to be used in the electrocution of convicted murdered Edmund Zagorski on Thursday, in 1988.

Leutcher’s reputation was later tainted when he made the claim that there were no gas chambers at Auschwitz, a comment that led to the discovery that he had neither an engineering degree nor a license, even though he promoted himself as an engineer.

Leuchter stands behind the electric chair he rebuilt in 1988, but he is concerned that it may fail because of changes others made to it after he was no longer allowed to service it.

‘What I’m worried about now is Tennessee’s got an electric chair that’s going to hurt someone or cause problems. And it’s got my name on it,’ Leuchter said. ‘I don’t think it’s going to be humane.’

The man who built Tennessee’s electric chair, Fred Leuchter, has expressed concerns that the device may malfunction if it is used in a death-row electrocution this week for the first time since 2007. Leuchter, center, stands by the control panel of the device he built for the state in 1988 in this undated photograph

Gov Bill Haslam said he is confident the execution can be carried out without problems.

‘I have a great deal of confidence in our Department of Correction folks. We’ve spoken with them regularly and they’ve assured us’ the chair is ready.

Leuchter said he was familiar with prisons because he accompanied his father to his job as superintendent of transportation in the Massachusetts state prison in the 1940s and 50s, from about age four to age 16. 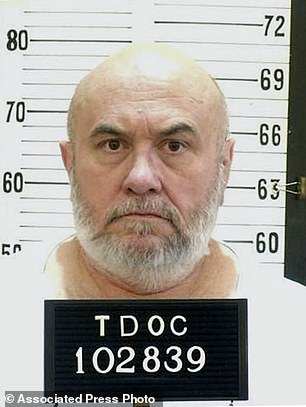 Leuchter said he fears Thursday’s electrocution of death row inmate Edmund Zagorski (above), a convicted murderer, will not be humane if the chair malfunctions

As a teenager, Leuchter helped his father move the state’s old electric chair when the prison relocated, and he remembers they had to do it on a Sunday because the warden didn’t want the news media to know.

‘I helped put the chair in the truck. We covered it up with canvas,’ he said.

Years later, when it looked as though Massachusetts might restart capital punishment after a long hiatus, a prison steward who knew Leuchter’s father asked Leuchter to come in and see whether the old chair was still usable.

From there, ‘my name was given to other states,’ Leuchter said.

He said many of their electric chairs were ‘decrepit, defunct, didn’t work properly – if they ever had in the first place.’

Denno, a law professor at Fordham who has studied execution methods for more than 25 years, said Leuchter filled a void. Often ‘the most qualified people don’t want to be involved’ in executions, she said.

Tennessee’s chair is just one of many execution devices Leuchter worked on between 1979 and 1990, relying on skills picked up designing navigational and surveillance equipment and a careful study of documents describing early executions.

In addition to electric chairs, Leuchter built, refurbished and consulted on gas chambers, lethal injection machines and a gallows for at least 27 states. 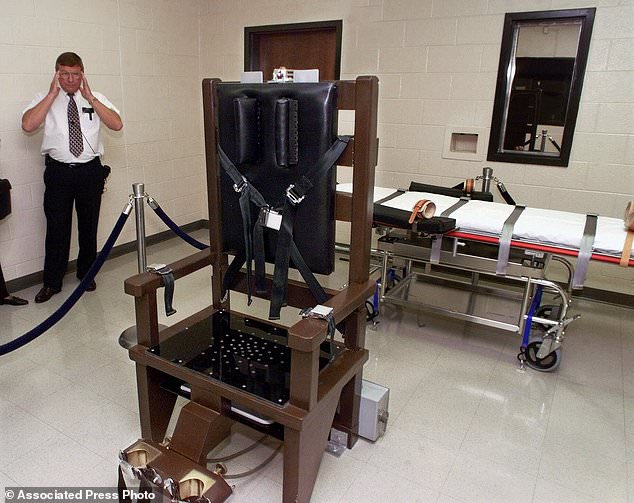 Leuchter, whose reputation as an electrocution expert was tainted after he made a claim that there were no gas chambers at Auschwitz, refurbished the chair for the state of Tennessee in 1988. Pictured: Ricky Bell, the warden at Riverbend Maximum Security Institution in Nashville, gives a tour of the prison’s execution chamber with the newly-refurbished chair in 1999

Even after he was no longer welcome as a prison contractor, Denno said prison officials continued to contact Leuchter for help ‘because they literally had no one else to go to.’

Tennessee asked Leuchter to refurbish its chair in 1988, when it was facing the possibility of its first execution in decades.

‘It looked like it was made for a midget or something,’ Leuchter said.

The last time Tennessee put someone to death by electrocution was Daryl Holton in 2007.

Holton, of Shelbyville, was convicted in 1999 for killing his three young sons and stepdaughter, Stephen Holton, 12; Brent Holton, 10; Eric Holton, 6; and 4-year-old Kayla Holton, in November 1997.

He was given four death sentences and became the first death-row inmate to die in the electric chair in Tennessee since 1960.

An Associated Press reporter who witnessed Holton’s execution wrote that a black shroud was placed over his head before a 20-second shock was administered.

The shock caused Holton to straighten his back and move his hips up out of the chair before he slumped back. There was a 15-second pause before he was given a second shock that lasted 15 seconds.

A report from the state medical examiner later found that Holton had suffered minor burns to his head and legs but there were no signs of the severe burning and other major injuries that had been seen in some past electrocutions.

So he built a new chair that incorporated wood from the original, which he was told was from the old gallows, and replaced the chair’s electrodes. He also replaced the old leather straps that tether prisoners to the chair with quick-release nylon belts, to aid guards tasked with removing bodies after executions.

He trained prison workers and gave them certificates as ‘electrocution technicians.’

Leuchter said he sold the original chair. A collector of ‘murderabilia’ listed it on eBay in 2000. It now resides in the Alcatraz East Crime Museum in the Smoky Mountains.

Denno said electric chairs have ‘a history of botches that has only gotten worse.’

In two Florida executions in the 1990s, smoke and flames shot from the condemned inmates’ heads. In 1999, blood spilled from under an inmate’s mask.

Shortly afterward, the US Supreme Court agreed to decide whether the electric chair violates the 8th Amendment prohibition on cruel and unusual punishment. But the case was dropped after Florida switched to lethal injection.

Tennessee has executed only one person in Leuchter’s electric chair. Daryl Holton died that way in 2007.

The execution was successful.

The chair was inspected on October 10 of this year and found to meet the criteria for an execution, state documents show.

But Leuchter said he feels the chair now is ‘defective and shouldn’t be used.’

‘It worked the first time, but I think they were lucky,’ he said.