The handbrake is rapidly becoming a thing of the automotive past as manufacturers eradicate them from their latest cars in favour of electronic parking brakes.

But car makers’ transition away from the manual handbrake can be expensive for drivers, with the average repair cost for a faulty electronic parking brake being £831, according to used car warranty provider MotorEasy.

Meanwhile, a manual handbrake repair costs on average £149 – a difference of £682.

Bye-bye manual handbrake: Just 17% of new cars in UK showrooms today have the pull-lever manual handbrake as manufacturers ditch them in favour of electronic parking brakes

The breakdown of how many new models are now sold with electronic parking brakes has been revealed as part of online sales platform CarGurus’ annual Manual Handbrake Report, which is now in its third instalment.

It looked at the 642 models offered by 38 mainstream brands, with 550 cars having the electronic alternative to handbrakes. It means just 92 new cars have a pull-lever handbrake.

Popular models including the Seat Leon, BMW 4 Series and Vauxhall Corsa – which is set to become Britain’s most-bought new car of 2021 –  have all dropped traditional handbrakes over the last year, the report confirms.

And some manufacturers have already pulled the brakes on the manual handbrake for all models in their showrooms.

Household names including Volvo, Alfa Romeo, Jaguar, Porsche and Mercedes-Benz now no longer sell a single passenger car in the UK with a handbrake, making a 100 per cent switch to the electronic alternative.

Other big brands are also on the verge of ditching the handbrake altogether.

For instance, only one per cent of new Audis has the option of a manual handbrake – the Audi A1 Sportback – while just six per cent of Peugeot’s range offer the more customary braking system.

While electronic parking brakes offer easier operation to motorists – activating with the push of a button and releasing automatically when the driver presses the accelerator – they are far more expensive to repair.

The priciest electronic parking brake repair cost on MotorEasy records is a £2,005 bill to fix the system in a 10-year-old Range Rover.

And electronic parking brake issues are not what you’d call rare.

In the same year, Tesla also issued a voluntary recall of 53,000 Model S and Model X vehicles worldwide due to a parking brake fault, while Audi, Renault and Toyota have all also had to recall models for similar issues with their electronic parking systems in the past.

One brand that won’t be forced to implement such recalls is Abarth.

The performance arm of Fiat is the only mass-market manufacturer to offer manual handbrakes on all models across its range – though that only consists of souped-up versions of the previous-generation 500 superminis. 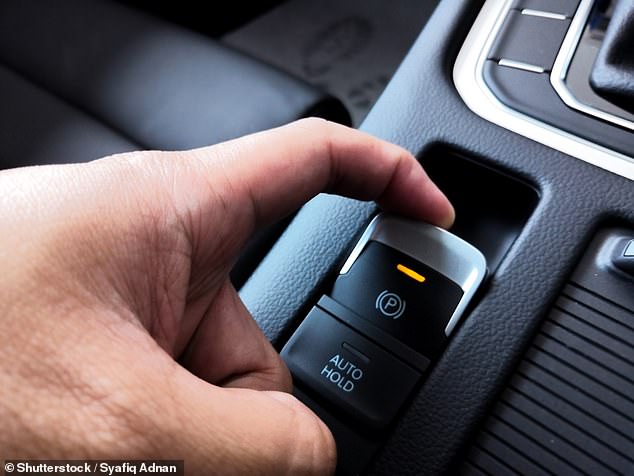 Electronic parking brakes are more convenient for motorists, requiring just a touch of a button to activate them. They also automatically disengage when a driver presses the accelerator 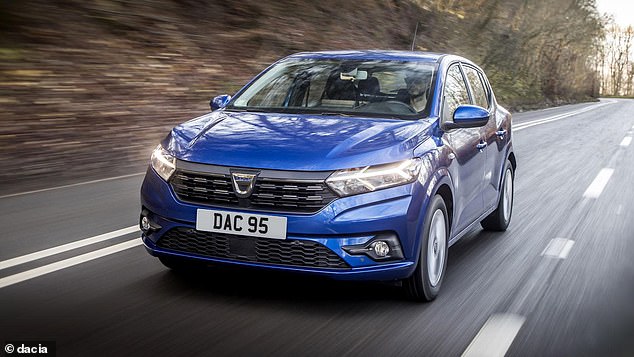 While the electronic parking brake was once the preserve of expensive models, most cars today have them – including the budget-friendly Dacia Sandero, Britain’s cheapest new model

Even Dacia, famed for its budget-friendly motors, has started to fit electronic parking brakes to its latest models, including the new Sandero supermini.

CarGurus says the decline from 24 per cent of new cars with handbrakes in 2020 to just 17 per cent this year has been driven by two factors.

The first is the rise in electric and hybrid models, which, in most cases, use electronic parking brakes.

The second is the departure of Mitsubishi from the UK market this year, taking with it a number of models that featured in the 2020 data with manual handbrakes.

Chris Knapman, editor at CarGurus UK, said: ‘Last year we forecasted the existence of the manual handbrake on new cars only has a few years left, and our latest data causes us no reason to believe otherwise with there being an even greater decline in 2021 than there was between 2020 and 2019.

‘The rapid shift towards electric vehicles will only speed up the demise of the manual handbrake, leaving many traditionalists who are looking for the tactile feel and mechanical simplicity of a manual handbrake scratching their heads.

‘Nonetheless, for drivers looking to enjoy this feature, there are still certain models of new cars available with manual handbrakes across a range of classes.’