Eleven people were ‘shot in less than 12 hours hours in NY, including a woman wounded in the head’

Eleven people were ‘shot over less than 12 hours in New York City, including a woman, 30, who was struck in the head and is in critical condition’

Eleven people were shot in New York City in less than a 12-hour span this past weekend.

The shootings took place in Brooklyn, The Bronx, Queens and Manhattan between 5:30 p.m. Saturday and about 5 a.m. Sunday, sources told the New York Post.

While most of the victims are expected to live, a 30-year-old woman shot in the head on Frost Avenue in East Williamsburg, Brooklyn, early Sunday morning remained in critical condition at Bellevue Hospital, says the NYPD.

In another shooting caught on Citizen app video, police were seen in the footage responding to a man shot in the leg in East Harlem by 4 p.m. by two suspects cops are searching for, WABC 7 reports.

And a third shooting around 90 minutes later in Jamaica, Queens left a man wounded near 107th Street.

Officers are pictured on the scene of a shooting in East Williamsburg that left a man and woman shot. The female victim remains in critical condition at Bellevue Hospital 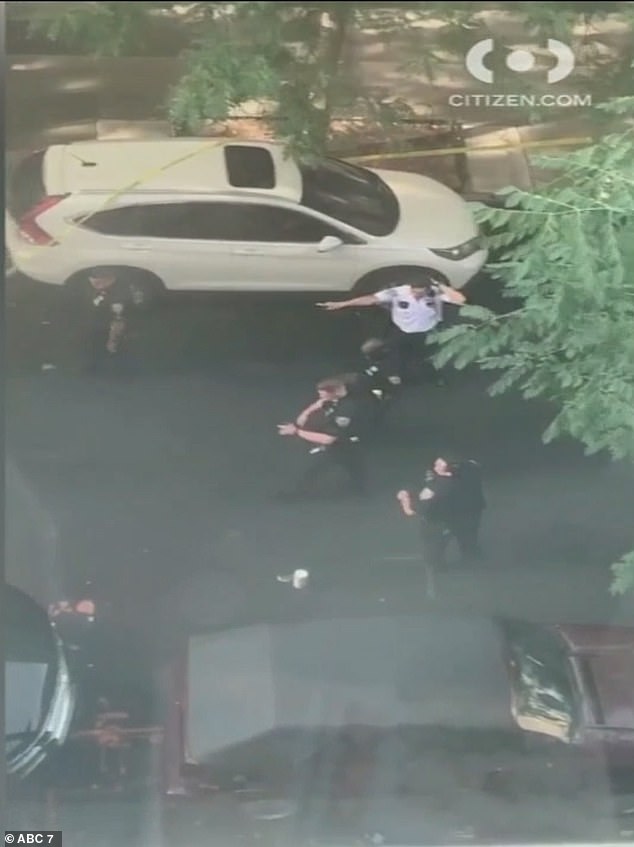 In another shooting caught on Citizen app video, police were seen in the footage responding to a man shot in the leg in East Harlem 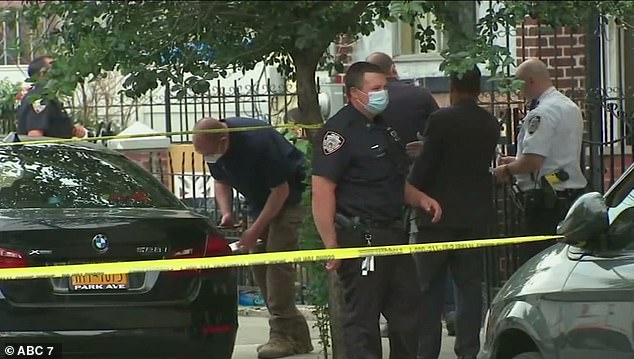 And a third shooting around 90 minutes later in Jamaic,a Queens left a man wounded near 107th Street. Officers are pictured investigating at the scene

The gun-related violence has brought the tally of shootings since Monday to 59, with a total of 81 victims, including six who were shot fatally for the year, the Post reports.

By comparison, there were nine murders for all of 2019, but only 26 shootings during the same period last year.

The chief blamed the weekend’s shootings on the city’s no-bail law, a reform which cops have criticized for suspending bail requirements on non-violent offenders, WABC 7 reports.

Monahan also said the release of inmates from the city’s Rikers Island jail over coronavirus concerns has contributed to the increase in gun violence.

He also pointed to ‘animosity’ towards the police in the wake of the George Floyd police-related slaying in Minneapolis on Memorial Day. 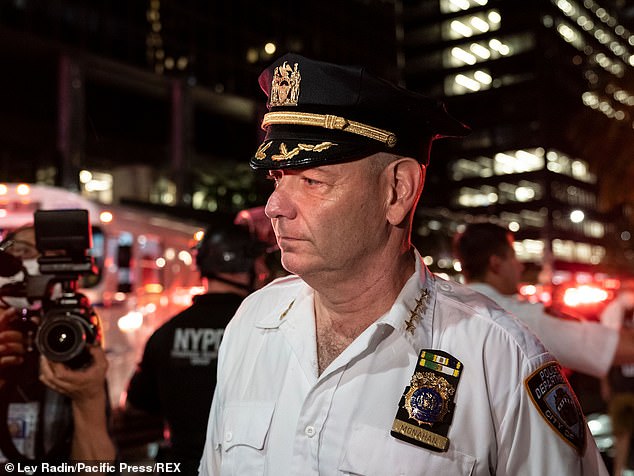 Floyd, a 46-year-old black father of five, died after former police officer Derek Chauvin pressed his knee on the man’s neck for almost nine minutes during an arrest.

Video footage of the incident taken by a bystander shows the police-related slaying, which triggered Black Lives Matter protests that have followed calling for an end to police brutality and systematic racism across the country.

‘If you listen to the City Council, they want less policing. They want to defund the police, said Monahan.

‘But as I look out there right now, with the violence going on, it’s not a good sign,’ he said, calling on the council and community to provide more guidance.