Elisha Hudson’s headaches turned out to be a brain tumour

A beauty queen who blacked out and crashed her car as she drove to her doctor’s surgery to find out why she was suffering with terrible headaches, discovered she had an untreatable brain tumour.

Elisha Hudson, 25, from Cromer, Norfolk, began suffering following a previous illness but the pain had grown in intensity and had become unmanageable.

Following the car crash, Ms Hudson was taken to hospital where she feared she would be diagnosed with epilepsy.

Instead she was horrified to discover she had a brain tumour which was growing in size and it cannot be operated on.

Ms Hudson, who recently won her local pageant and was crowned Miss Norfolk,  said: ‘You have a lot of questions that go through your mind: Like, how long have I got?’ 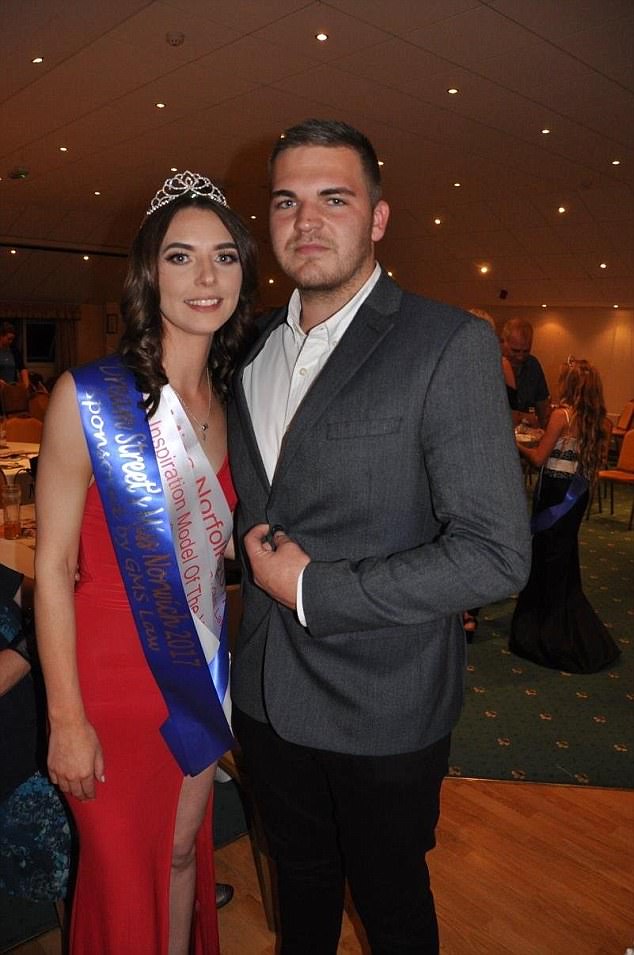 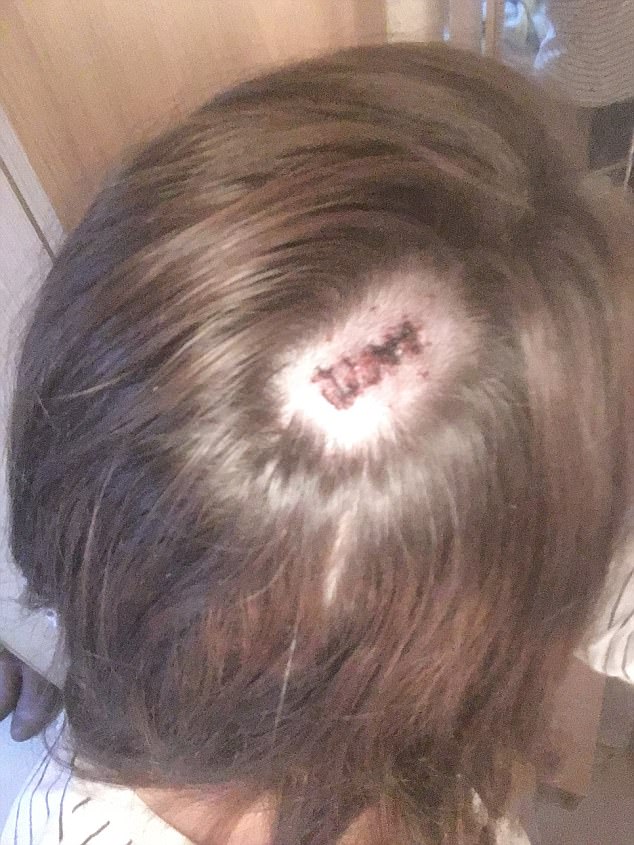 Ms Hudson’s head after her biopsy in February 2017: ‘It was so unexpected,’ she said

Four years before she was diagnosed with a brain tumour, Ms Hudson had been suffering form myalgic encephalomyelitis (ME), also known as a Chronic Fatigue Syndrome, for which there is no treatment.

During the worst periods of her illness, Ms Hudson would sleep for up to 22 hours a day, and says she often felt exhausted and depressed. She would also suffer from headaches and pain around her body.

She was so ill, she was forced to take time off from her job as a carer at the Royal British Legion Care Home, in her hometown of Cromer.

Over time she began to feel better and was hoping to return to work.

WHAT IS A LOW GRADE GLIOMA?

Low grade gliomas are brain tumours. They are classified as a grade 2 tumor making them the slowest growing type of glioma in adults.

The most common symptom caused by low grade gliomas are seizures. These can be small seizures that you barely notice, resulting in unusual smells, funny feelings in your stomach or brief spells that you can’t explain.

Other symptoms that we can see are headaches, problems with speaking or understanding, personality changes, memory difficulty, numbness, weakness, and vision problems.

Sometimes, a patient does not have any symptoms, and the tumor is found when a MRI or CT is done for other reasons.

Low grade gliomas are usually treated with a combination of surgery, observation, and radiation. If the tumor is located in an area where it is safe to remove, then the neurosurgeon will attempt to remove as much as possible.

In general, the causes of low grade gliomas aren’t known.

If your brain has been exposed to radiation in the past, you may be more likely to develop a brain tumor. Scientists have looked at other possible causes such as aspartame (Nutrasweet), cell phones, and power lines, but no one has been able to show that any of these clearly cause brain tumors.

But in November 2016, her headaches started again. It was as she made her way to the GP’s surgery to find out why they had come back that she blacked out and crashed.

‘It was just after lunch time and I was actually driving to a doctor’s appointment over my headaches,’ Ms Hudson said.

‘I zoned out at the wheel of my car – that only happened once – and that led to all the tests being done.

‘I had sort of come to, sort of realised what happened and got out, and there was a lady who came out of her house to help me and see if i was OK.

Had she not blacked out, she says, she may not have gotten the appropriate tests.

The following day she went to Norwich hospital for tests, at which time she feared she would be diagnosed with epilepsy. 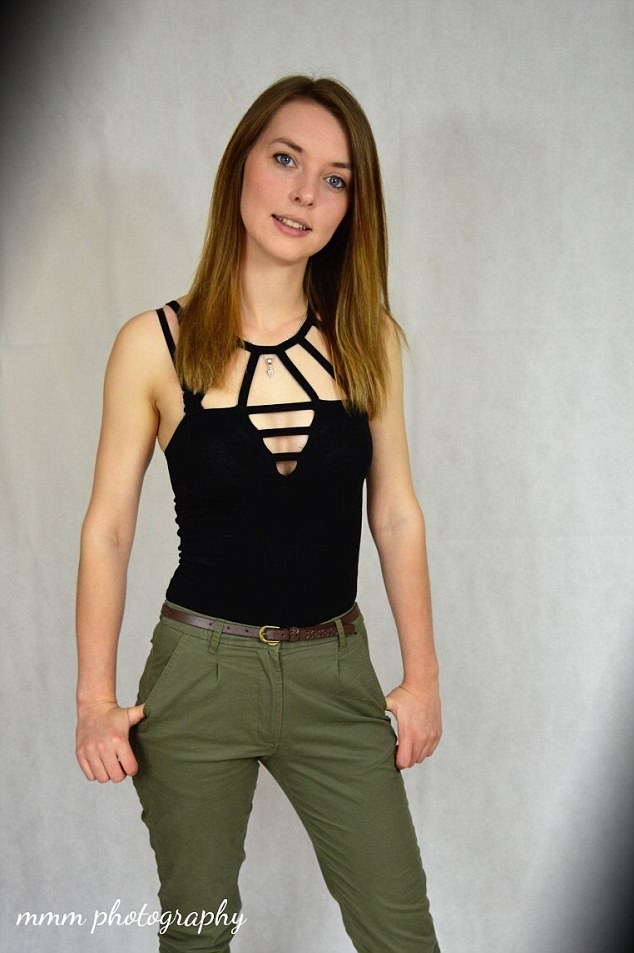 Elisha Hudson, 25, passed out on her way to the doctors’ office to ask about her headaches

She describes feeling ‘numb’ when, following a number of tests, including an MRI scan and CT scan, doctors told her that her headaches were symptoms of a brain tumour: a low-grade glioma.

She was told there was no treatment: surgery would be too dangerous and chemotherapy and radiotherapy weren’t available to her.

‘It’s so close to the optical nerve they won’t treat it at the moment. If the tumour continues to grow then obviously we will eventually, in the future, go down the route of chemotherapy or radiotherapy.

‘It could be another 10 years before I have treatment. But there are big risks with that because it is so close to my optical nerve.’ 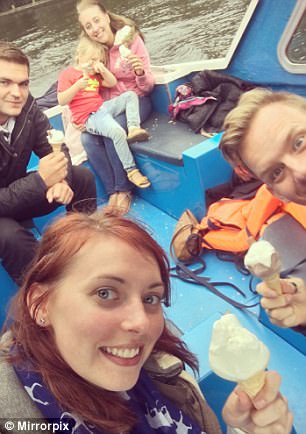 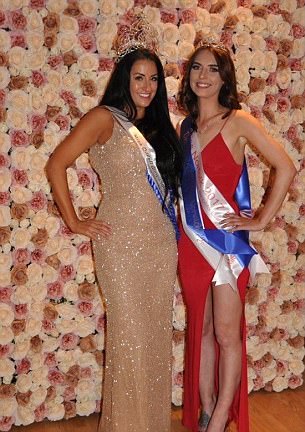 ‘It was really frightening. I obviously didn’t know what was going on,’ Ms Hudson said.

‘At first I was trying to come to terms with whether I had epilepsy, and then they said I didn’t have it and they found this growth in my brain which they thought was a tumour and I would have to have a biopsy done.

‘It was so unexpected.’

She added: ‘I was so numb about it all.’

‘You have a lot of questions that go through your mind like, “How big is the tumour?”, “Is this going to affect my life?”, or my driving, my work, or myself financially?

‘Potentially, it is life-threatening, so also, “How long have I got?”‘ 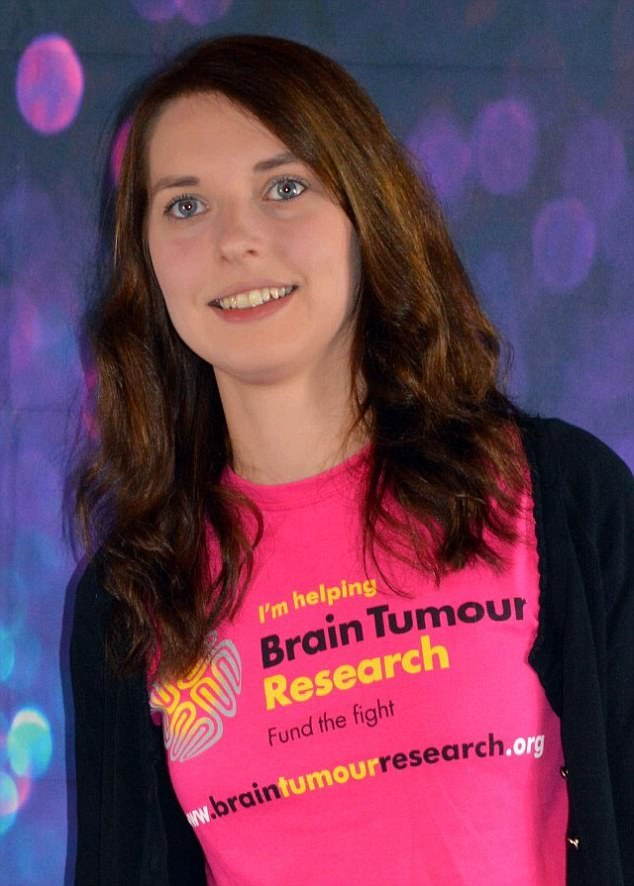 A year following her diagnosis, Ms Hudson is still in the dark about her prospects.

However, to help her come to terms with the diagnosis, Elisha has decided to adopt a new mindset. She describes this as just, ‘getting on with it’.

‘The way I see it, because they’re saying there is no treatment at the moment I have to live my life to the full and to the max and stay positive,’ she said.

For example, she has become an activist to raise awareness about the disease, and has started a career in fashion modelling.

In September 2017, she entered the Norfolk pageant, which is supported by Brain Tumour Research (BTR).

She won the pageant, despite having no previous modelling experience.

‘It was amazing,’ Ms. Hudson said.

‘I never really was interested in pageants or beauty or anything like that, but as this particular pageant was raising money for BTR that’s why I went for it.’

She later raised £3,600 during a charity night.

She hopes to use her position as Miss Norfolk to spread awareness of her disease and to teach other sufferers not to feel their options are limited because of it.

‘Basically I just want to prove that yes, I do have a brain tumour but I can still fulfil my dreams through modelling and photo shoots and fashion,’ she said.

‘I want to prove the point that if somebody gets told bad news your life doesn’t get put on hold – go out and do everything you want to do.’

Today, Elisha has only a few symptoms, except for some remaining headaches.

At times, however, she says she regrets getting her diagnoses.

‘I feel as if I have a heavy weight on my shoulders and I have gone through many different emotions. To begin with, I was angry that I had been told such devastating news yet there was no treatment.

‘Sometimes I wonder if it would be better not to know and not to have to live with the constant anxiety and worry that every little ache or pain, every headache, might mean the tumour is growing.’

She has also partnered with the Brain Tumour Research (BTR) and will collaborate with them on their ‘Wear A Hat Day’ initiative, March 29.

The day, which has run for nine years so far, has raised £9 million in total during Brain Tumour Awareness Month.

In the meantime, Ms. Hudson will continue to raise money for her cause and is organising another fundraiser for May.