She has made a name for herself by flaunting her youthful figure at 53 in as many revealing outfits as possible on Instagram.

And Liz Hurley failed to let modesty or decorum get in the way of her dress sense last night at the US ambassador’s lavish Thanksgiving dinner.

The actress wore a daring low-cut gown by Dsquared2 that stunned other guests – but seemed not to phase Trump’s good friend ambassador Woody Johnson.

Mr Johnson, who is the scion of America’s richest families with an estimated net worth of $6.3 billion, beamed as he posed for a snap with Liz, one of many she posted on social media.

The event to celebrate, what is usually a wholesome and family-orientated festival, was held at Johnson’s private residence in London and is where President Donald Trump and his wife Melania stayed during their visit in July.

Beaming: The screen star appeared in high spirits as she posed with US Ambassador Woody Johnson at the glitzy event, treating fans to snaps from the party on Instagram 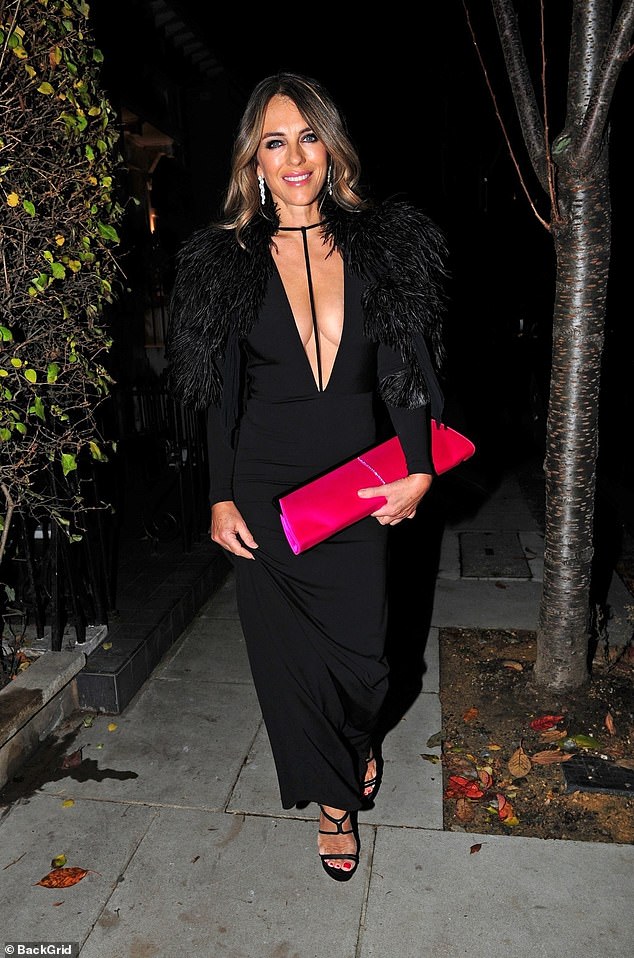 Working it! Elizabeth Hurley lived up to her siren aesthetic as she left US Ambassador Woody Johnson’s Thanksgiving dinner with a handsome pal in London on Wednesday night

She also took a picture with Mr Johnson’s wife Suzanne, who wore a sequinned gold gown and posed with her hand on Liz’s stomach.

‘Thanksgiving Dinner given by US Ambassador Woody Johnson and his gorgeous wife Suzanne at the heavenly Winfield House,’ the actress penned alongside one of a series of snaps she posted on social media.

Mr Johnson, a billionaire investor and owner of the New York Jets, was appointed ambassador by Trump last year.

His family wealth comes from Johnson & Johnson company, which his ancestor Robert Wood Johnson founded in 1886. 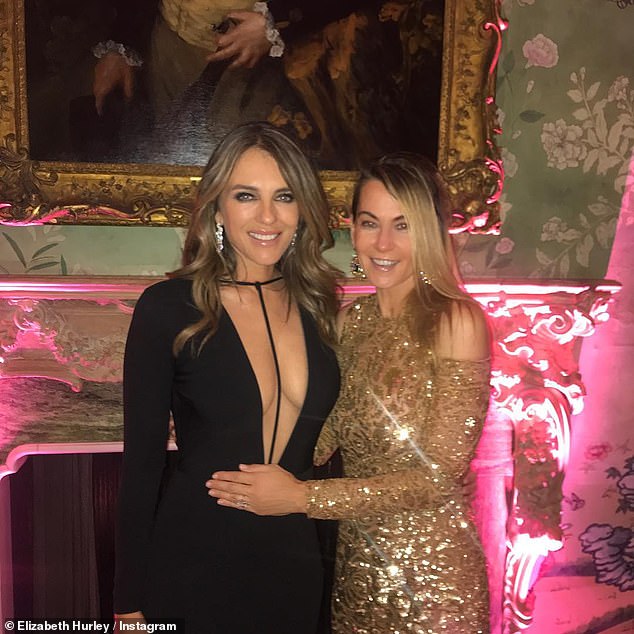 Shine bright: Elizabeth is pictured with Woody Johnson’s wife, actress Suzanne Ircha, who seems unsure about where to put her hand

But despite his wealth and status, all eyes at the dinner were sure to be on Liz’s ensemble which she embellished with a feathered cape.

The Royals actress enhanced her frame with a pair of black strappy heels, and added a pop of colour with a vibrant pink clutch bag.

Exuding glamour on her night out, Elizabeth accessorised with diamond dangle earrings. 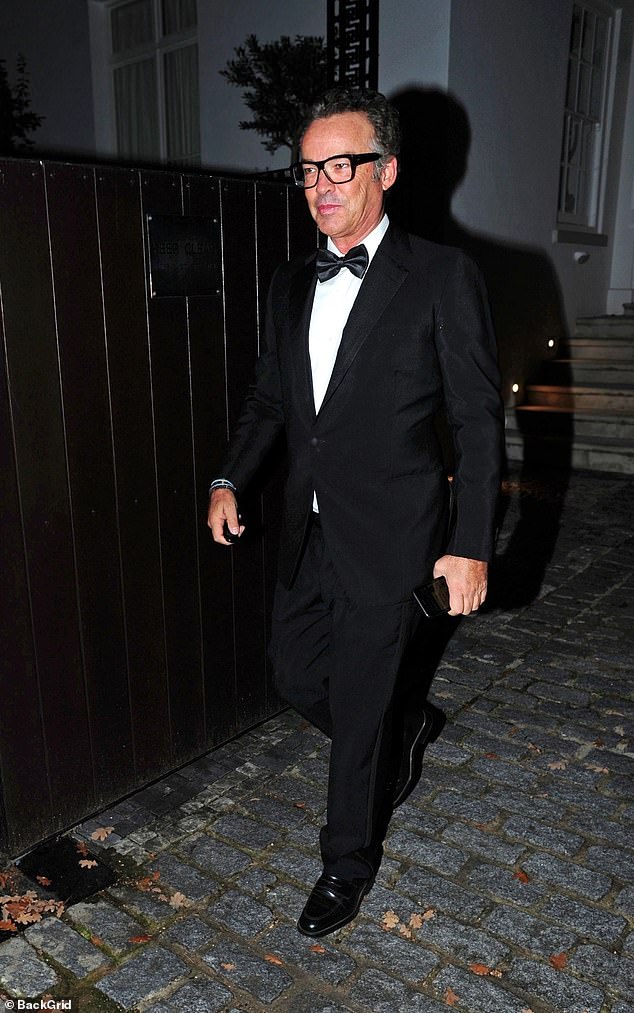 In good company: The model, 53, was joined by a handsome male pal, who put on a suave display in a crisp black suit, complete with a white shirt and ribbon tie 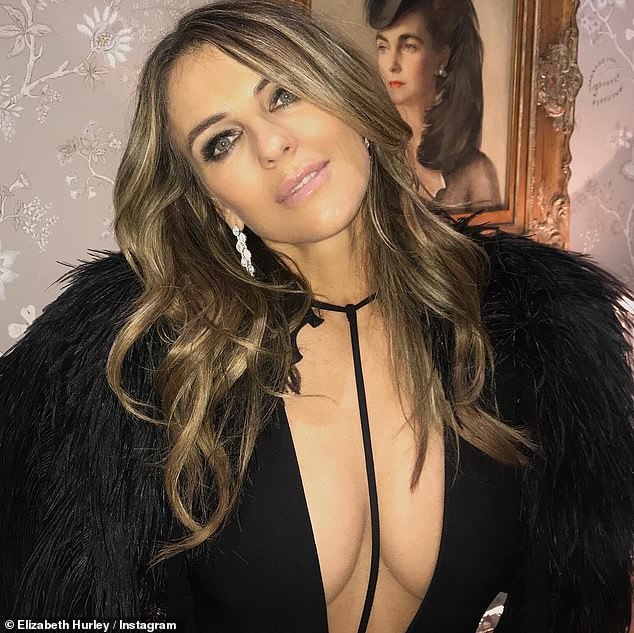 Va-va-voom! Liz commanded attention as she took the plunge in a deeply low-cut gown by Dsquared2, which accentuated her enviable physique 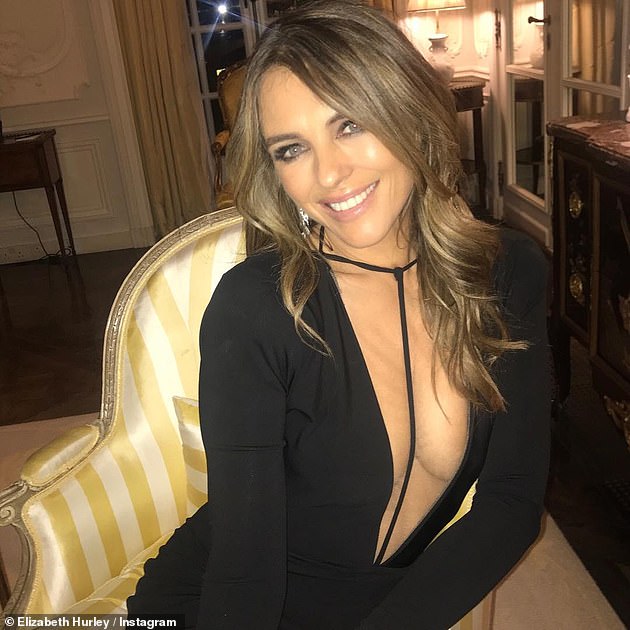 Wow-factor! Upping the style ante, her ensemble was embellished with a feathered cape to ensure all eyes were on her

The Austin Powers star turned heads with her youthful-looking appearance, which worked well with her heavy smoky eye look and pink lipgloss.

Meanwhile, Liz’s pal put on a suave display in a crisp black suit, complete with a white shirt and ribbon tie.

The occasion was held at the Winfield House, and given the plenty photos Elizabeth uploaded to her social media account, it would seem that the bombshell had a rather splendid time.

The British beauty recently enjoyed a relaxing vacation in the Maldives, where she stayed at the five-star Milaidhoo resort, and, of course, a series of photos were bound to follow.

In one snap, she looked jaw-dropping as she slipped into a baby blue and white paisley print bikini from her Elizabeth Hurley Beach collection while beaming into the lens.

The actress wore her light brunette locks in loose waves and accentuated her stunning features with natural make-up. 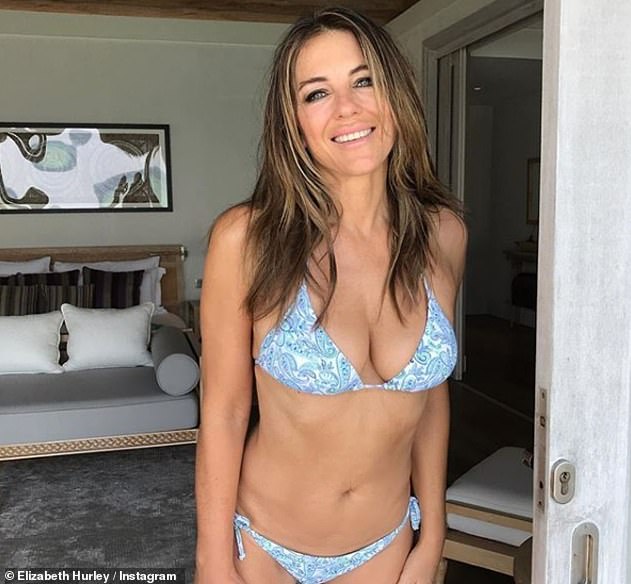 She’s got it! The British beauty recently enjoyed a relaxing vacation in the Maldives, where she stayed at the five-star Milaidhoo resort, and, of course, a series of photos were bound to follow

Liz has previously confessed that while she doesn’t go to the gym, she thinks it is ‘important to stay active’.

Speaking to E! News in 2016, Elizabeth said: ‘I like women to feel very confident in how they look and to accept that every size can be beautiful.