Elizabeth Warren has described President Donald Trump as ‘corruption in the flesh’ during a huge rally of more than 20,000 people  in New York.

Standing before the crowd in Washington Square Park, the Democrat presidential contender vowed to rid the economic and political systems of corruption.

Taking aim at Trump, Warren, 70, said: ‘He is sworn to serve the people of the United States, but he serves only himself and his partners in corruption.’

The Massachusetts state senator felt that the president was a product of the infection that had already engulfed the U.S., the Washington Post reported.

Elizabeth Warren (above) spoke to a crowded rally of more than 20,000 in Washington Square Park, New York, where she vowed to tackle corruption in America 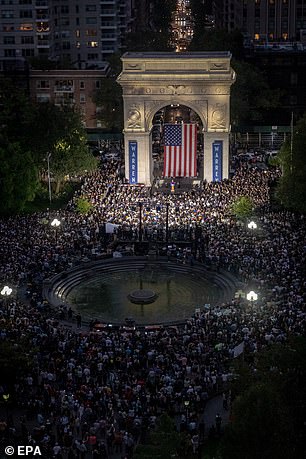 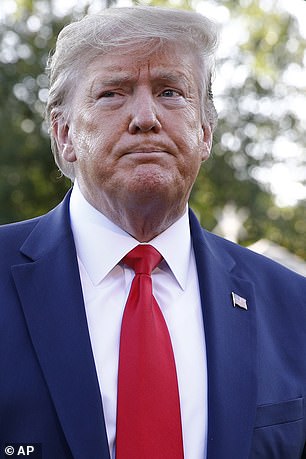 Supporters crammed into space around the fountain, the pathways and any space inside the outdoor venue (left). During her speech she described President Donald Trump (right) as ‘corruption in the flesh’ and vowed that, if elected, she would ensure all future candidates of public office must post their tax returns online and would not be permitted to own a business on the side – in a clear jab at Trump

This was one of her first big addresses to a crowd that packed out the 10-acre park, where they wrapped around a massive fountain and clogged pathways.

The audience was full of younger and racially diverse supporters, predominantly women, the site reported.

The rally was near to the site where a fire killed around 145 workers at the Triangle Shirtwaist Company in 1911.

She blamed those deaths on corruption, stating that many women died due to factory owners’ neglect of safety features to cut costs.

Warren believes that same level of corruption is happening today, adding: ‘Giant corporations have bought off our government.’

She revealed her anti-corruption plan would band members of Congress and White House Cabinet secretaries from becoming lobbyists – and vice versa.

Also federal judges would no longer be able to avoid misconduct investigations by resigning from their posts.

Speaking directly of Trump she said all public office candidates would be required to post their tax returns online and would not be able to own side businesses, if she was elected.

Warren previously stated that the government in its current form only works for ‘the wealthy and the well-connected.’

She listed industries including big energy, health care and insurance companies, who she claims use lobbyists to advance their agendas. 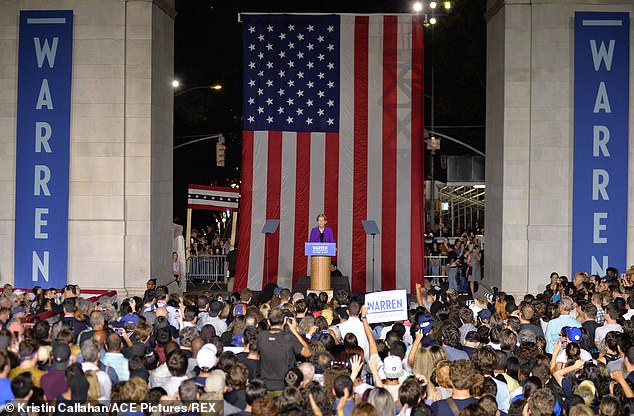 Warren wrote that progressive policies pushed by the democratic party and many of the presidential hopefuls were being stopped by large companies.

She believed popular ideas like universal child care, a federal criminal justice system overhaul, gun reform and affordable housing plans, would all fail due to corruption.

The efforts, Warren said, are being ‘stymied because giant corporations and billionaires who don’t want to pay taxes or follow any rules use their money and influence to stand in the way.’

Without naming any of her democratic opponents, she added: ‘Too many politicians in both parties have convinced themselves that playing the money-for-influence game is the only way to get things done.’

Warren, who is known for taking selfies with anyone who wants one at events, told the giant crowd, ‘Tonight is a little something different.’