Ella Mills opens up about family, fame and facing down her haters

When Ella Mills, 31, says that her life is ‘on fast-forward’ it’s hard to disagree. Just ten years ago, as a student, she started the blog Deliciously Ella, detailing her recovery from debilitating illness through meditation and plant-based recipes. Today, Deliciously Ella is a multifaceted lifestyle brand with projected revenues for 2022 of £20 million (putting the company’s value at around £60 million) and over two million Instagram followers.

In 2012, plant-based eating was a niche concern. ‘But now 50 per cent of the UK population are into it,’ she says. Clearly there is a lot of money to be made from cacao nibs. Ella and her family (husband and Deliciously Ella’s CEO Matthew Mills, 38, and their daughters Skye, three, and May, nearly two) live just off London’s Kensington Church Street, where houses sell for north of £5 million, but Ella insists their lifestyle is not lavish. She can’t drive and her husband Matthew’s car is a secondhand BMW. Their last holiday was four days in Spain this year. ‘It’s really boring but we spend pretty much all our time at work. In seven years we’ve started four businesses together, got 40 products in seven different countries, recruited over 50 people to the team, had two kids, moved house and office three times and got a dog,’ laughs Ella.

It would be easy to be envious of this beautiful couple, each from a privileged background. But the past seven years have brought challenging as well as joyful and rewarding events. Shortly after she met Matthew, Ella’s father, then-MP Shaun Woodward, came out and left her mother (supermarket heiress Camilla Sainsbury) for his longtime lover, camera man Luke Redgrave. Then in 2018 Matthew’s mother, the former Labour MP Tessa Jowell, died from brain cancer. We’ll come back to this, and the hostility Ella faced as a young woman, but first, more on the crippling illness that prompted the creation of Deliciously Ella.

The second of four children, Ella grew up mostly in Oxfordshire, went to the fee-paying Dragon School in Oxford and studied history of art at St Andrew’s University, where she lived on a typical student diet rich in booze, sugar and processed foods. ‘I had almost two years that were the best ever, having so much fun, then suddenly’ – she snaps her fingers – ‘it was gone.’ 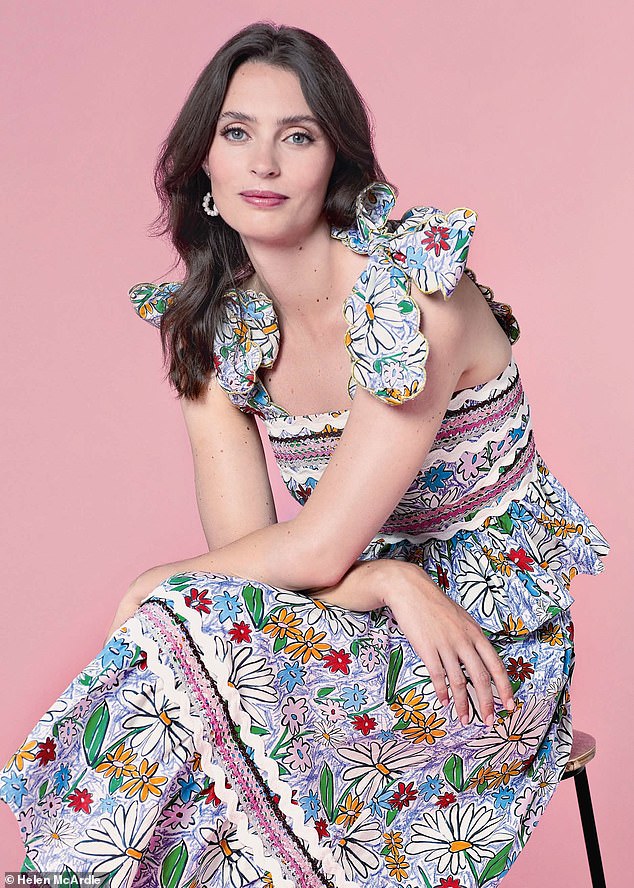 Top and skirt, Celia B. Earrings, Dinosaur Designs. Ella and her family (husband and Deliciously Ella’s CEO Matthew Mills, 38, and their daughters Skye, three, and May, nearly two) live just off London’s Kensington Church Street, where houses sell for north of £5 million, but Ella insists their lifestyle is not lavish

She was struck down by postural orthostatic tachycardia syndrome, which attacked her nervous and digestive systems and left her periodically bedridden or wheelchair-bound between frequent hospital visits. ‘I had blackouts, constant headaches, brain fog, reflux. My stomach was so painful and I looked more pregnant then than when I actually was. I could never have held down a job, I couldn’t socialise or go out, couldn’t function. I just sat at home.’

Alongside the physical affliction was the psychological estrangement from her peers. ‘You’re in your early 20s, seeing friends having fun. I felt so alien from everyone around me.’

6,000 stores across the UK that stock Deliciously Ella products

Doctors tried countless medications but nothing worked. Desperate, Ella headed to the internet for answers and found stories of others who improved their health through diet and lifestyle changes. Feeling it was worth a go she began putting them into practice and in 2012 started a blog detailing what happened. ‘It took me three years to come off all the medication and four or five to feel normal,’ she says. ‘It wouldn’t take much for me to feel unwell again.’

That said, her blog had an impressive 130 million hits in the first two years, which prompted her to start running small supper clubs and cookery classes showcasing the food she was eating. It didn’t take long for the publishing world to notice this photogenic new social media star. The first Deliciously Ella book appeared in 2015.

‘I remember talking to my mum the summer before it came out, asking her if she thought it would work,’ Ella says. ‘She’s always been supportive but is also a realist and said, “I bet you’ll sell 500 copies.” Within ten days of an article in the Daily Mail coming out, it was number one on Amazon and stayed there for eight weeks.’ The sudden media attention was a shock: ‘We’d gone from something niche to people talking about you instead of to you,’ she says. ‘I was so young and out of my depth and confused. I didn’t know what I was doing.’

Alongside attacks from online trolls, she was criticised in the press as a faddy promoter of ‘clean eating’ (a phrase she dislikes and never used). ‘I definitely had moments from 2015 to 2017 when I thought, “Do I really want to do this?”’ It was the Deliciously Ella community that kept her going. ‘When you hear from people who say this has changed their life, you think, “Who cares about this random person I’ve never met who doesn’t like me?”’

But life at this time also had an upside. In 2015 Matthew Mills, a professional golfer turned ethical investor, saw Ella’s photo in a newspaper and decided she’d be a great ambassador for a planned African coconut farm (yes, really). So he got his MP mum to get her MP dad to broker an introduction. ‘It was an arranged marriage,’ Ella laughs. ‘He was dating someone else; I was 23 and had just broken up with a long-term boyfriend. When Matthew told me he’d been a professional golfer I thought that was so uncool.

‘The first two times we met it was business and not a date. Eventually he asked me out to dinner and three days after that we moved in together. We’d grown up 15 minutes away from each other and had lived these strangely parallel lives. It felt like a true sense of home in a way that I never expected.’

Matthew immediately began helping Ella to expand the brand. He found out the name of Starbucks’ UK MD and emailed different permutations of the possible address until he hit on the right one and secured an audience to pitch Deliciously Ella energy balls. ‘It was our first big retailer meeting and we’d been told they were really tough, but they said, “We’ll take them: when can you get them to us?”’ she says. ‘We didn’t have any stock and the next day we had to be at Wilderness Festival with our café. It’s hard to believe but back then no one was serving avocado toast, and we sold 1.5 tonnes of it on the first day. We did that for four days and all the time were talking to Starbucks and promising them stock, and then pleading with a factory to get it made.’

Bach or The Beatles?

Netflix or night out?

Phone call, but in person even better

Mojito, though I’d prefer a margarita

The company now predicts that it will soon be selling a food product every two seconds. Three million UK households currently buy something from the Deliciously Ella range and it is the number one ‘free from’ cereal brand in the UK. It makes over 12 million signature oat bars a year for stores across the UK, Ireland, Switzerland, Germany and Austria, with plans to expand into the Netherlands in the autumn and the US in early 2023.

Despite working and living together, Ella says that she and Matthew rarely argue. She is the public face of the brand while he handles the backstage nuts and bolts and they take all major decisions together. ‘This is a partnership,’ Ella says.

Although it’s a family business, there were no favours or handouts from their parents. ‘My family haven’t worked in Sainsbury’s since before I was born. Ironically, they were one of the last retailers to stock us,’ Ella says. ‘But there is a spirit that comes from my great-great-great-grandpa, who started one of the biggest brands in the country.’

She is reticent to talk about her father’s decision to leave her mother in 2016, saying only it ‘wasn’t a huge shock’ and his relationship with Redgrave ‘was stuff we didn’t know about as kids’. However, she acknowledges that the split ‘while difficult at the time was ultimately the best thing that could happen to them’. Her father and Redgrave had a small wedding two years ago. Her mother is also with a new partner.

The loss of Matthew’s mother was a harsher blow. ‘It was just so fast,’ Ella says. ‘At our wedding the year before she was doing headstands on the beach. She’d been made a dame and was getting ready to celebrate her 70th birthday – she was in such a great place.’ Ella’s elder daughter Skye ‘is a reincarnation of Tessa, she looks identical to her, has many of the same mannerisms and the exact same dance moves’, she says.

As for the future, they could probably sell up and retire right now, but instead they bought the company back from their investors with a bank loan last year. It’s also ‘definitely in the ether’ that Matthew might one day stand as an MP, while Ella is contemplating a wider form of advocacy, along the lines of the lobbying work done by Jamie Oliver. ‘I know I can do the most good working directly to change the way people eat, and making that exciting,’ she says. Watch this space.