‘The most beautiful moments are the simplest times we’ve been brought together’: Elle Macpherson on keeping her family grounded as she graces Vogue Australia in first-ever family photo shoot

She shares sons Flynn, 21, and Cy, 16, with her ex-fiancé, French financier Arpad Busson.

The 55-year-old Australian model, nicknamed ‘The Body’, poses in a blue dress shirt and tan corset belt, and embraces her sons who wear tailored navy suits.

Elle told Vogue that despite Flynn and Cy leading lavish lifestyles, they are kept grounded.

‘It’s a delicate line (on keeping her family grounded), and we certainly have opportunities as a family that I didn’t have as a child,’ she said.

‘We are an international family… but I have to say the most beautiful moments really are the simplest times when we’ve been brought together, things like road trips.’

Elle revealed she had always said no to a family photo shoot, but went ahead with Vogue Australia for its August issue, as she knew they would be treated well on set. 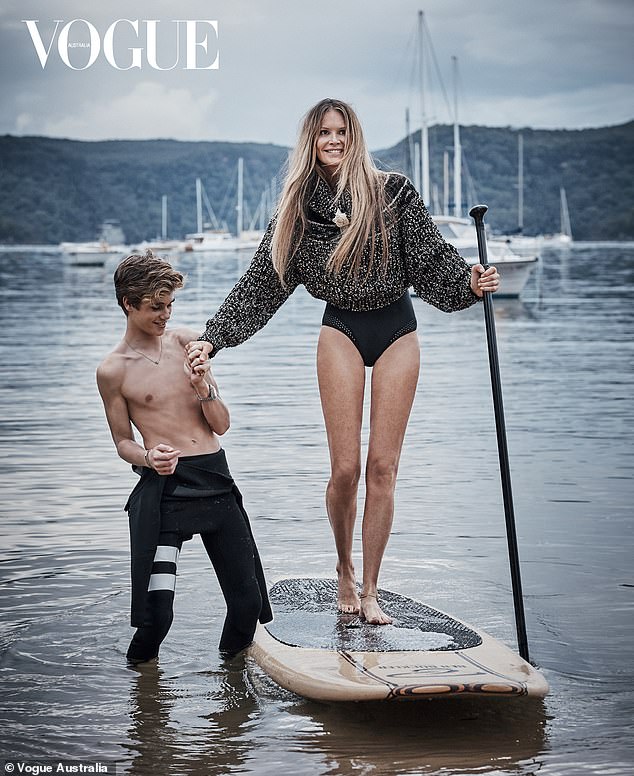 Looking incredible: One inside shot sees the supermodel, nicknamed ‘The Body’, standing on a paddleboard in a black marle sweater and swimsuit, while holding onto Cy’s hand

‘We kept the children out of the public eye. It was a decision that their dad and I made,’ she said. ‘We didn’t think it necessary for them to be recognised in public.’

Alongside the stunning cover shoot, the family pose for inside shots, taken at Sydney’s Northern Beaches.

One photo sees Elle revealing her endlessly long and lean legs in a black marle sweater on top of a black swimsuit.

She stands on a paddleboard and grabs hold of Cy’s hand, who is standing in shallow water, with a wet suit rolled down to his hips.

Elle’s signature blonde locks are styled straight and out, framing a radiant and youthful complexion. 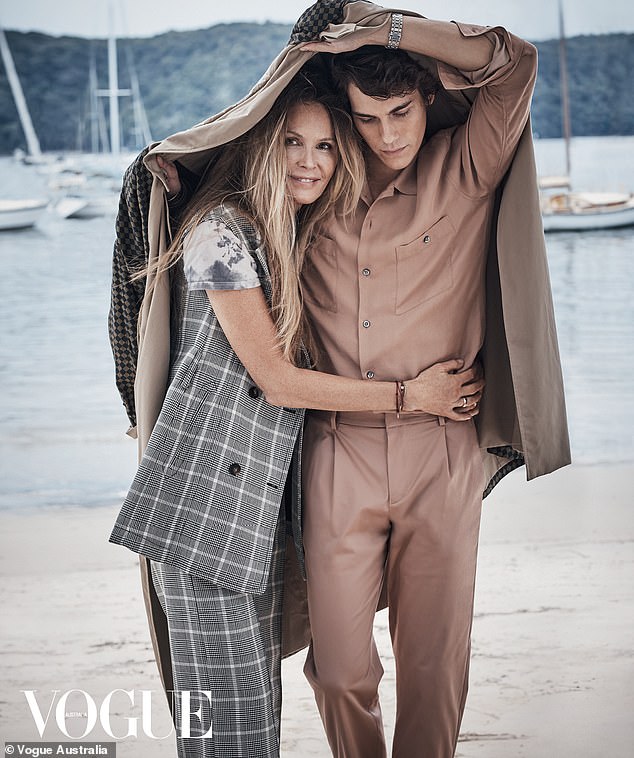 While another shot sees Elle embracing her eldest son Flynn while standing on the beach’s shore.

The WelleCo co-founder covers her enviable figure in grey tie-dye T-shirt, teamed with a grey plaid vest and matching trousers.

Flynn sports a crisp tan dress shirt, tucked into pants of matching fabric, and shields himself and his famous mother from above with a trench coat over their heads.

Elle shares Flynn and Cy with French Financier Arpad Busson, 56, who she began dating in 1996 and separated in 2005.

The Vogue Australia August issue is on sale Monday 22 July. 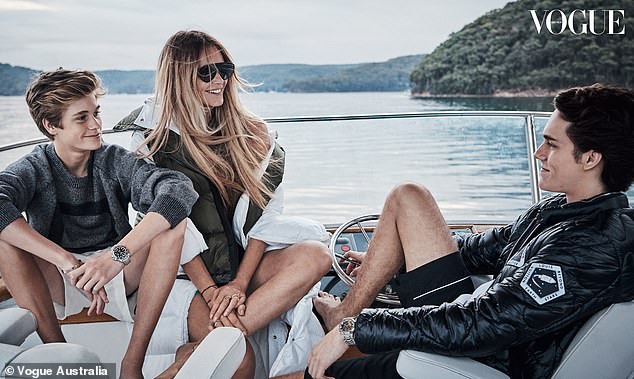