She’s the Australian supermodel who has graced the cover of the Sports Illustrated Swimsuit Issue a record five times.

And now Elle ‘The Body’ Macpherson has shared the rather surprising secret to her youthful look: the time she eats breakfast.

The 54-year-old told Mind Body Green that she eats her breakfast later in the day, particularly if she eats dinner later in the evening, meaning that she effectively fasts for a prolonged period between her last meal of one day, and the first meal of the next.

Revealed: Elle Macpherson, 54, has shared the secret to her youthful look – and it comes down to what time you eat breakfast 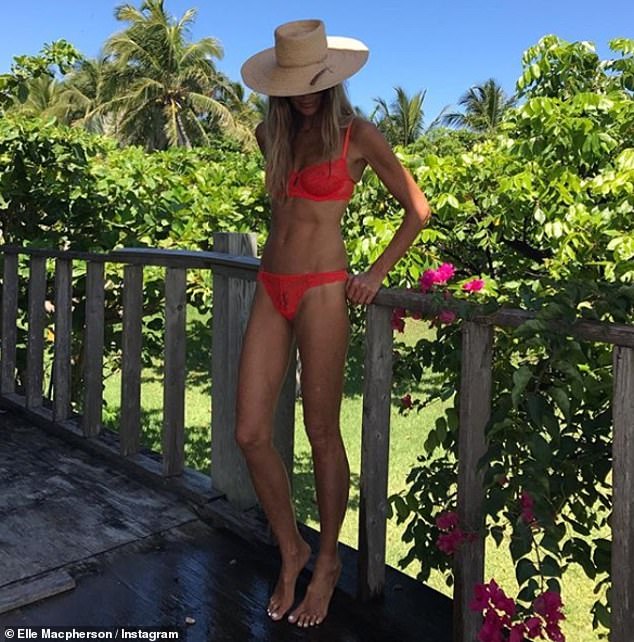 Lean: Speaking to Mind Body Green in New York recently, the Australian supermodel revealed she starts her day with a glass of hot water and lemon, followed by a green juice

This intermittent fasting allows her body and digestion to get a bit of a ‘rest’ – an increasingly-popular eating trend that boasts a number of health benefits, from increased energy, balanced blood sugar, and decreased inflammation.

According to Harvard Medical School, intermittent fasting – if done at the right time of day and as part of a healthy diet – is a ‘realistic, sustainable, and effective approach for weight loss, as well as for diabetes prevention’.

What is Elle’s morning ritual?

As far as Elle is concerned, the process is incredibly effective, not least because it gives her ‘digestion a good rest’.

‘People say breakfast is the most important meal of the day, and I agree, but it’s about what time that breakfast is,’ Elle told the website.

‘One of the most important things for me is giving my digestion a good rest.

‘I’ll have breakfast a little later in the day, especially if I’ve been eating later in the evening (the night before),’ the mother-of-two added.

Elle said she starts her morning with a glass of hot water and lemon, which doesn’t prevent her body from continuing its fast but does, experts say, help to aid the body in a number of ways.

According to Mind Body Green, those benefits include a boosted immune system, balanced pH levels and clear skin; the warm water and lemon also aids digestion, and helps to curb any cravings that someone who is doing intermittent fasting might suffer from.

A bit later on, Elle will break her fast with a rather complex DIY green juice that she confesses might seem ‘a little crazy’ to some. 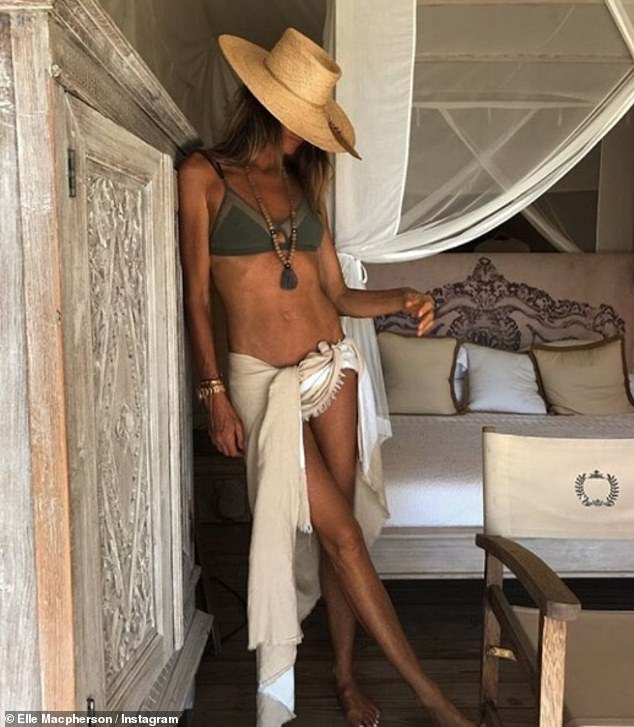 Timing: Elle said she usually has breakfast later in the day, particularly if she has eaten dinner late in the evening, the night before

What is in Elle’s diet?

Elle aims to drink ‘two to three litres of water’ a day and consumes a diet of vegetables, fish, eggs, nut cheese, tahini, vegetable pasta, and a chocolate shake made from WelleCo’s plant protein powder, water and hemp seeds.

But after welcoming her fifties four years ago, Elle said she is feeling more content than ever.

In an interview with The Herald Sun last September, Elle, who was famously nicknamed ‘The Body’ by Time magazine back in 1989, admitted that she isn’t afraid of getting older.

‘I’m strong, I’m fit, I have two amazing sons and I’ve learnt a lot along the way and I’m really grateful that I’m as happy and healthy as I am,’ she added.