A Silicon Valley venture capitalist who lost a case against her firm for sexual discrimination claimed taking time off for maternity leave was treated akin to ‘abandoning a ship in the middle of a typhoon to get a manicure’.

Ellen Pao, who was a junior partner at Kleiner Perkins Caufield & Byers, sued the firm during a five-week trial in 2015 where she claimed she had been passed over for promotion and later sacked for complaining about discrimination.

In one incident in 2011, Pao flew on a private jet to New York along with senior partners whodiscussed Jenna Jameson’s pornography career and the ethnicity of their favorite sex workers.

Ellen Pao, pictured, has written a book outlining the discrimination she claimed to have suffered at the hands of male superiors at a top Silicon Valley venture capitalist firm 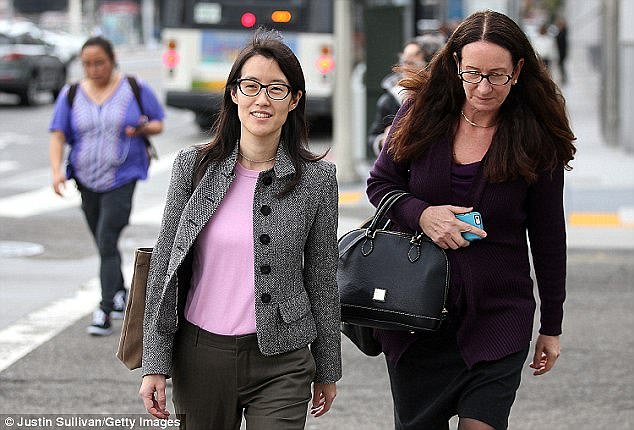 Pao, left, sued Kleiner Perkins Caufield & Byers in 2015 but lost her case after a jury rejected she had been fired after complaining about discrimination at the major firm 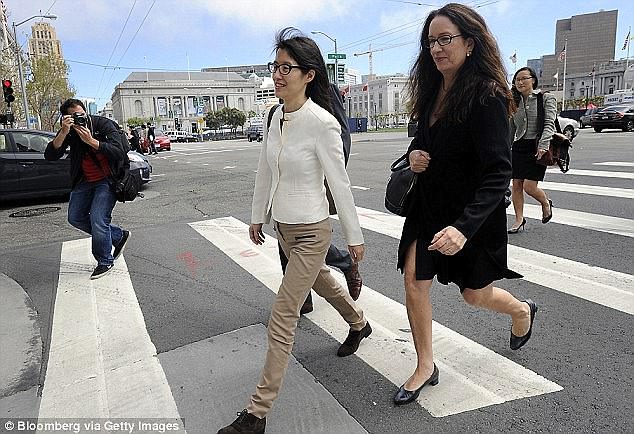 Pao has written a book, Reset, about her experiences despite losing her case and being ordered to pay more than $250,000 towards the company’s legal costs.

Originally, the firm had sought $1 million, but this was ruled excessive by a judge.

In an extract of the book, published in The Cut, Pao claimed: ‘I was often cast as the villain — incompetent, greedy, aggressive, and cold. My husband and I were both dragged through the mud, our privacy destroyed. For a long time I didn’t challenge those stories, because I wasn’t ready to talk about my experience in detail. Now I am.’

In the book, she details how she had a brief relationship with one member of staff before her marriage. The relationship ended when Pao discovered the man had returned to his wife despite assurances they were having a divorce.

Following the relationship, Pao claims the man, who subsequently got a promotion, had discriminated against her.

Speaking to other female members of staff, she claimed the same man discriminated against them if they rejected his advances.

She said: ‘During our first date in New York, he told me during hours of conversation that he had previously been with men, something I never had a problem with but which would later be used in the press as evidence that our marriage was a sham. We got engaged just six weeks after we met.’

Ellen Pao spent several months in 2015 following her departure from the VC firm as CEO as Reddit.

However, she was fired from the online bulletin board after users disagreed with her decision to fire a popular moderator.

Reddit, which has more than 163 million users and describes itself as a forum for real-time journalism, said in a statement that Pao resigned ‘by mutual agreement’ and would be replaced by founder and original CEO Steve Huffman.

The statement said: ‘We are thankful for Ellen’s many contributions to Reddit and the technology industry generally.

‘She brought focus to chaos, recruited a world-class team of executives and drove growth. She brought a face to Reddit that changed perceptions, and is a pioneer for women in the tech industry. She will remain as an advisor to the board through the end of 2015.’

Despite the pressure she was facing at work, Pao continued with the company. But when she fell pregnant, there was hostility.

She revealed: ‘ When I gave birth to my first child, some partners at work treated my taking maternity leave as the equivalent of abandoning a ship in the middle of a typhoon to get a manicure.’

During a second pregnancy in June 2012, Pao said her doctor told her during a regular checkup that she had suffered a miscarriage.

Soon afterwards, Pao was fired by the company.

A jury in March found that Kleiner Perkins did not discriminate or retaliate against Pao when it fired her in 2012.

The case became a flashpoint in an ongoing discussion about gender inequity at elite technology and venture capital firms, where women are grossly underrepresented.

In March 2015, a  jury of six men and six women rejected all of Pao’s claims against Kleiner Perkins, determining the firm did not discriminate against her because she is a woman and did not retaliate against her by failing to promote her and firing her after she filed a sex discrimination complaint. 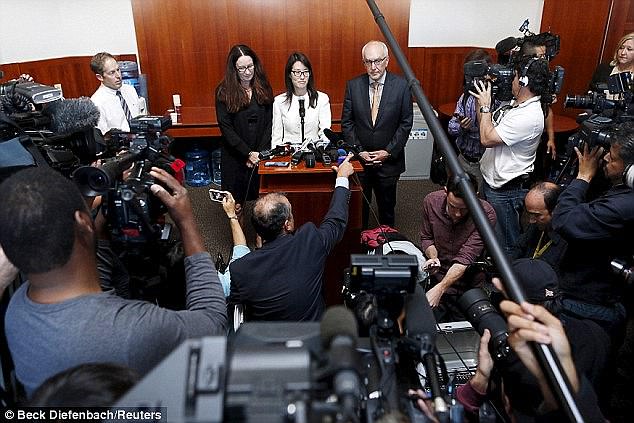 But the heart of their argument was that Pao was an accomplished junior partner who was passed over for a promotion and fired because the firm used different standards to judge men and women.

Kleiner Perkins’ attorney, Lynne Hermle, countered that Pao failed as an investor at the company and sued to get a big payout as she was being shown the door. They used emails and testimony from the firm’s partners to dispute Pao’s claims and paint her as a chronic complainer who twisted facts and circumstances in her lawsuit and had a history of conflicts with colleagues that contributed to the decision to let her go.