Elon Musk has begun his testimony to defend Tesla’s 2016 acquisition of SolarCity against a lawsuit by shareholders seeking to recoup the $2.6 billion the company paid for the ailing solar panel maker.

Musk took the witness stand on Monday, kicking off a two-week trial in Wilmington, Delaware, before Vice Chancellor Joseph Slights, who will decide whether the SolarCity deal was fair to Tesla stockholders.

The lawsuit by union pension funds and asset managers alleges the celebrity CEO Musk strong-armed Tesla’s board to buy SolarCity, just as it was about to run out of cash.

Musk owned a 22 percent stake in SolarCity, which was founded by his cousins Peter and Lyndon Rive. He also owned about 22 percent of Tesla at the time.

His testimony devolved into a tense back-and-forth with shareholder attorney Randy Baron, whom Musk called ‘reprehensible’ at a testy 2019 deposition, according to a transcript.

When Baron pressed Musk in court on why he didn’t like him, the CEO testily responded, ‘I think you are a bad human being,’ according to USA Today reporter Isabel Hughes.

‘Some of your questions,’ he told the opposing attorney, ‘are really tricky and deceptive.’ 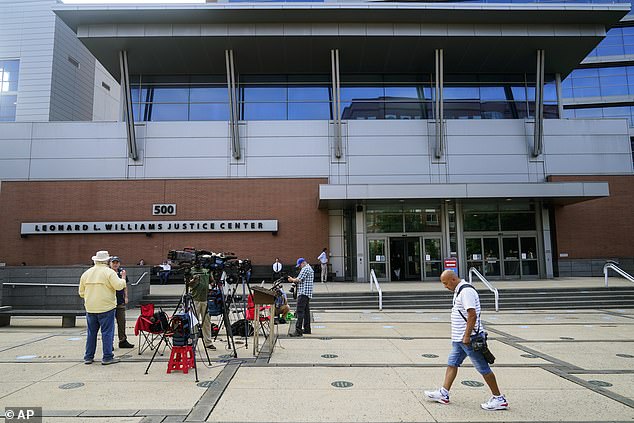 Members of the media gather outside the justice center where Elon Musk will testify in Wilmington, Delaware on Monday. Musk snuck into the building and was not spotted

In his testimony on Monday, Musk denied the deal was a bailout of SolarCity as Tesla shareholders have alleged.

‘Since it was a stock-for-stock transaction and I owned almost exactly the same percentage of both there was no financial gain,’ he said, responding to questions from his attorney.

Musk, wearing a dark suit, white shirt and dark tie, testified that for years before the SolarCity deal he saw the solar panel company as a natural part of the transition to sustainable energy.

The lawsuit filed by union pension funds and asset managers alleges Musk strong-armed Tesla’s board to buy SolarCity for $2.6 billion in 2016, just as it was about to run out of cash.

Musk owned a 22 percent stake in SolarCity, which was founded by his cousins Peter and Lyndon Rive.

Central to the case will be allegations that Musk, who also had a 22 percent stake in Tesla at the time of the deal, was nonetheless a controlling shareholder.

Shareholders asked the court to order Musk, one of world’s richest people, to repay to Telsa what it spent on the deal, which would represent one of the largest judgments ever against an individual.

He touted the deal at the time as central to his ‘Master Plan, Part Deux,’ which aims to reshape transportation by using sustainable energy to power fleets of self-driving electric vehicles.

Musk said on Monday that he did not control the appointment of board members or their compensation and that they negotiated the SolarCity deal and its economic terms without his influence.

Asked by his attorney, Evan Chesler, to describe his relationship with the board of directors Musk said: ‘I´d say good. They work hard and are competent. They provide good advice and are rigorous in acting on behalf of shareholders.’

On cross-examination, shareholder attorney, Randall Baron warned Musk that ‘we plan to spend a lot of time with you. It’s going to be a grind.’

Musk grimaced, poked at the six-inch thick binder exhibit and replied ‘I can tell by the binder.’

The chancery court trial, which does not a have a jury or opening arguments, is being held under strict orders forbidding any cameras or cell phones from the courtroom.

Shareholders asked the court to order Musk, one of world’s richest people, to repay to Telsa what it spent on the deal, which would represent one of the largest judgments ever against an individual.

However, even if the judge finds the deal was unfair, he could award a much lower amount of damages.

Musk has argued the deal was fair and that it was negotiated by the Tesla board free of his influence and approved by fully informed stockholders.

He touted the deal at the time as central to his ‘Master Plan, Part Deux,’ which aims to reshape transportation by using sustainable energy to power fleets of self-driving electric vehicles.

Legal experts said the judge will be looking for evidence that Musk threatened board members or that directors felt they could not stand up to him.

The shareholders’ lawsuit accuses Musk of dominating deal discussions, pushing Tesla to pay more for SolarCity and misleading shareholders about the deteriorating financial health of the solar panel maker.

Central to the case will be allegations that Musk, who had a 22 percent stake in Tesla at the time of the deal, was nonetheless a controlling shareholder.

If he was, it would impose a tougher legal standard and increase the likelihood the deal was unfair to shareholders.

‘It would be a surprise to most people if the court were to come out and say that he doesn’t control here,’ said Brian Quinn, a professor at Boston College Law School. ‘Because he certainly acts like he does.’ 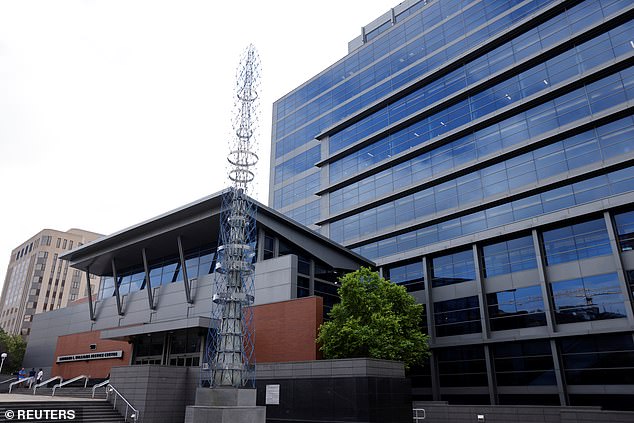 The Williams Justice Center, where Tesla CEO Elon Musk is testifying, is seen in Wilmington, Delaware on Monday 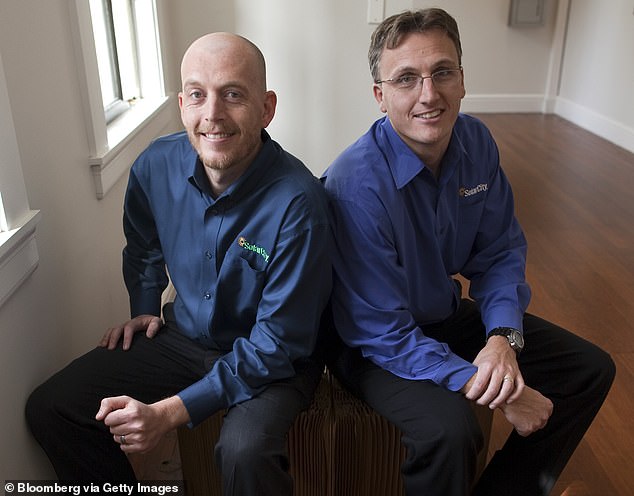 Musk owned a 22 percent stake in SolarCity, which was founded by his cousins Peter Rive (right) and Lyndon Rive (left)

When Baron asked if Musk bailed out SolarCity, Musk replied: ‘You are a shameful person.’

Vice Chancellor Slights will likely take months before he issues a ruling.

Daniel Ives, an analyst at Wedbush Securities, called the SolarCity acquisition a ‘clear black eye’ for Musk and Tesla, in large part because the solar panel company has failed to turn a profit.

‘It basically was putting good money after bad,’ Ives said. ‘For all the successes and all of the unimaginable heights Musk has achieved, this is one of the lowlights.’

Most investors, Ives said, place no value on the company’s solar business.

‘I just think Musk and Tesla underestimated the challenges and the hurdles that the business brings,’ he said.

Tesla, which has disbanded its media relations department, did not answer a message Friday seeking comment about the lawsuit. In its 2020 annual report, the company argued that the lawsuit was without merit and that Tesla would vigorously defend itself.

‘We are unable to estimate the possible loss or range of loss, if any, associated with these claims,’ the company report said. 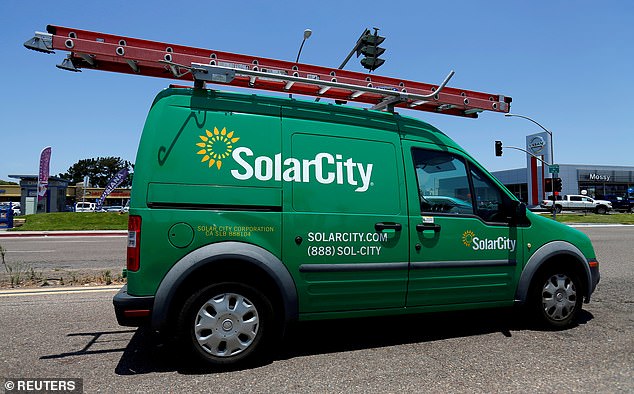 A SolarCity vehicle is seen on the road in San Diego in a file photo. The company failed to turn a profit and analysts question the wisdom of Tesla’s acquisition

Tesla’s energy generation and storage business generated $1.9 billion in revenue last year – 24% more than it did the previous year. Much of that revenue came from selling battery storage units. Tesla doesn’t specify whether the business made a profit, and it also has debt and expenses.

The lawsuit filed by the plaintiffs contends that Musk drove the decision to acquire SolarCity despite his clear-cut conflict of interest.

Musk has a history of fighting government agencies and lawsuits. He was forced to pay a $20 million fine to the Securities and Exchange Commission for making statements on Twitter about having the money to take the company private when he didn’t. But he won a defamation lawsuit that was filed by a British diver involved in the rescue of a Thai soccer team that was trapped in a flooded cave. Musk had called the man ‘pedo guy’ on Twitter.

Even if the trial ends with Musk having to pay personally for the whole SolarCity deal, $2.5 billion won’t much hurt the world’s third-wealthiest person. Forbes magazine has estimated that Musk is worth roughly $163 billion.

Ives suggested that while any such payment wouldn’t seriously affect Musk’s wealth, it would damage his reputation for choosing acquisitions.

Musk is fighting the lawsuit after others have settled ‘because that´s what Musk does,’ Ives said. ‘I think Elon believes this was the right deal and still does.’