Elon Musk could be reigniting his war with Apple. A new report reveals the billionaire is planning to add $4 to the Twitter Blue price for users who purchase the subscription through the iPhone app.

The expected cost for the service – which will add a blue checkmark to your Twitter account and offers early access to new features – is $7.99 a month, but sources told The Information that Musk is attempting to make up for the 30 percent fee the tech giant takes from in-app purchases.

The move follows rumors that Twitter could be banned from Apple due to its new content moderation policies, to which Musk responded by blasting the firm for charging developers a ‘secret 30% tax.’

Shortly after the billionaire released his fury on Twitter, he claimed he had met Apple CEO Tim Cook at the UFO-shaped headquarters in San Jose, California, and that the two had buried the hatchet.

Elon Musk could reignite his battle with Apple, as a new report claims he will charge an extra $4 for Twitter Blue purchases made in the iPhone app

However, the claims in The Information could spark another battle as Musk attempts to deter people from paying in the iPhone app by offering a lower price through the website, in a move that echoes that of Epic Games in 2020.

The video game maker funneled users to its website to purchase items for Fortnite, to avoid paying Apple fees. As a result, Apple booted the app from its App Store – and the two are still battling the issue in court.

It has yet to be seen if Musk plans on bypassing Apple’s fee.

Musk is touting Twitter Blue as a way of bringing in revenue for the company he purchased last month for $44 billion. 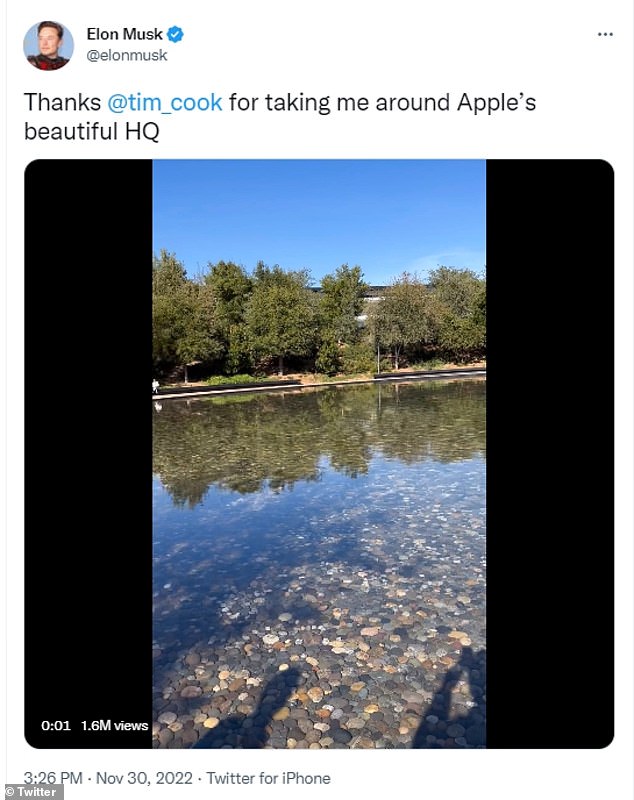 Musk later posted a video, claiming to show him getting a tour of Apple’s headquarters

The Information report said that lower pricing on the website was likely to drive more users to that platform instead of signing up on their iPhones. It did not mention whether pricing would also change for the Android platform.

Musk called out Apple and its CEO Tim Cook on November 28, after the company pulled its advertisements from Twitter.

Responding to American commentator Liz Wheeler’s tweet that he should create his own smartphone ‘if Apple and Google boot him from their app stores,’ Musk replied that he would do that ‘if there is no other choice.’

The billionaire continued on his verbal rampage against Apple, calling out the company for censorship.

‘Apple has also threatened to withhold Twitter from its App Store, but won’t tell us why,’ he later added.

‘Who else has Apple censored?’ Musk wrote.

He then posted a poll asking whether Apple should publish all censorship actions it has taken that affect customers, to which a majority of voters said ‘yes,’ and later called out the tech store for applying a ‘secret 30% tax’ on store-bought purchases.

Neither Cook nor Apple responded to Musk on the platform.

Even before Musk took the helm, Twitter had been at odds with Apple about its content moderation or lack thereof.

‘Free speech is the bedrock of a functioning democracy, and Twitter is the digital town square where matters vital to the future of humanity are debated,’ he said in April when the deal was announced.

However, he opened the floodgates, and an investigation by the nonprofit UK-based Centre for Countering Digital Hate (CCDH) found the use of racist, homophobic, transphobic, and anti-Semitic slurs soared significantly after Musk took over.

This is despite assurance the platform had reduced hateful activity.

On November 4, Musk claimed in a tweet that ‘hateful speech’ had fallen under his leadership and disputed what had been reported in the press.

‘Twitter’s strong commitment to content moderation remains absolutely unchanged. In fact, we have actually seen hateful speech at times this week decline *below* our prior norms, contrary to what you may read in the press,’ he tweeted. 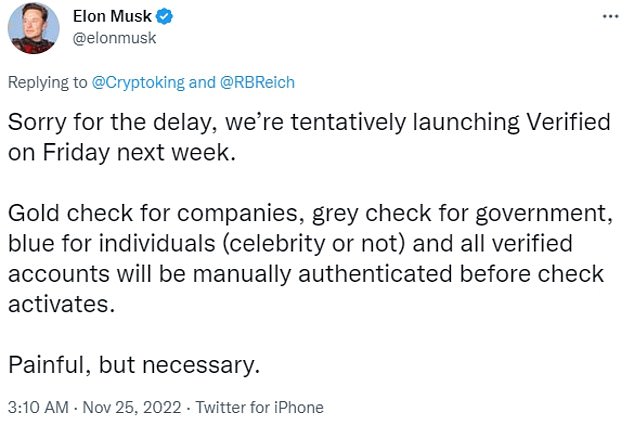 This forced Musk to halt the verification process, but not before advertisers pulled their contracts.

Then on November 25, it was revealed that Twitter would roll out a new approach to account verification using blue, gold and gray check marks to indicate different types of users.

‘Gold check for companies, gray check for governments, blue for individuals (celebrities or not),’ said Musk.

However, this new system has yet to launch.

April 2: Musk announces that he owns 9.2 percent of the company, making him its largest single shareholder.

May 13: Musk says Twitter deal is on hold pending a review of bot accounts.

May 26: Musk is sued by Twitter for stock manipulation during takeover.

July 8:  Musk says he’s backing out of the deal. Twitter sues, trying to force him into seeing it through.

October 4: Musk proposes again to go ahead with the deal at the original price.

October 26: Musk visits Twitter HQ with a sink, updates his bio to ‘Chief Twit’ and sets his location to Twitter HQ.

October 27: Musk is officially made the new owner of Twitter, and tweets ‘the bird is freed’.

November 1: Musk confirms plans to change the system of ‘Blue Tick’ verification on Twitter, for a reduced subscription fee of $8 a month.

November 4: Musk lays off half of Twitter’s workforce as an alleged cost-cutting measure, claiming he had ‘no choice.’

November 11: The Twitter Blue service is paused due to accounts purchasing verification and using it to impersonate brands and public figures.

November 12: Musk fires 80 per cent of Twitter contractors without warning.

November 15: Musk fires employees that posted negatively about him on the business messaging app Slack. The lawsuit between Musk and Twitter is dismissed.

November 16:  Twitter staff are told they need to sign a pledge to be able to stay on in their roles where they would be ‘working long hours at high intensity’ or receive three months of severance pay, resulting in a mass exodus.

November 18: A news-ticker was projected onto Twitter HQ in San Francisco dubbing Musk as a ‘space Karen’, ‘mediocre manchild’ and ‘bankruptcy baby’.

November 26 – Financial Times reveals that 50 of the platform’s top 100 advertisers have paused their ads.