Elon Musk could save billions of dollars in taxes if he moves Tesla from California to Texas or Nevada.

Musk confirmed yesterday that he had reopened the Tesla factory in Fremont, south of San Francisco, and dared police to arrest him for restarting production early, despite the plant being shuttered by Alameda County due to coronavirus.

The tech entrepreneur claimed that all other US auto companies had been allowed to resume operations and that Tesla had been singled out.

On Twitter, the tech giant threatened to move Tesla away from California after receiving what he perceives to be unfair treatment during the crisis.

‘This is the final straw,’ Musk tweeted. ‘Tesla will move its HQ and future programs to Texas/Nevada immediately.’ 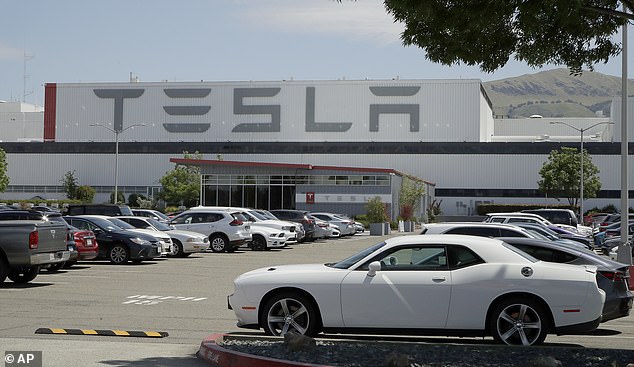 Musk confirmed Monday that Tesla has resumed production at its plant in Fremont, California, in defiance of the state’s coronavirus lockdown restrictions. The parking lot outside the plant is seen nearly full on Monday afternoon, even though local officials told the automaker to keep the facility closed through the end of the month 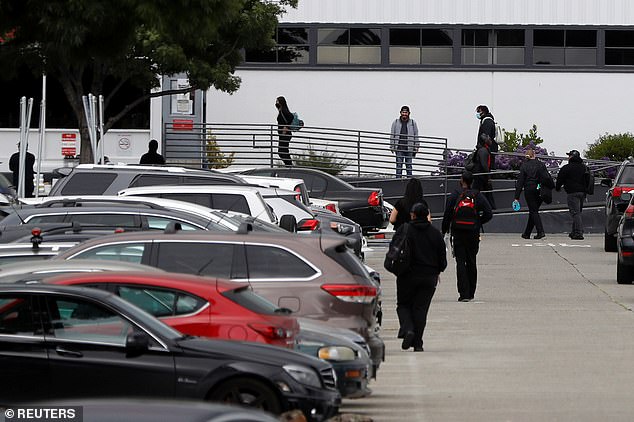 Employees are seen entering the Fremont facility on Monday. Sources said that Tesla threatened to fire them if they refused to return to work amid the lockdown 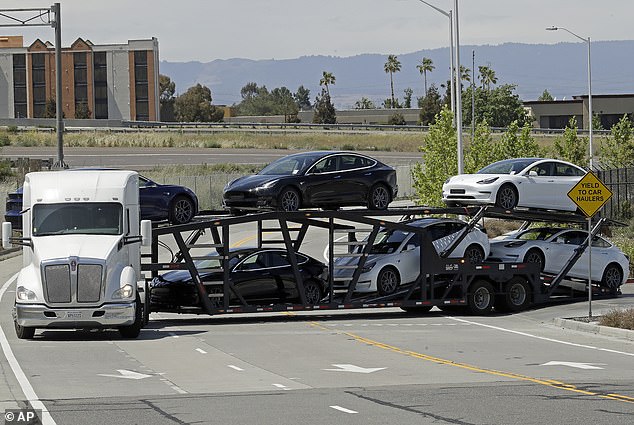 Semis loaded with new Tesla vehicles departed the Fremont facility on Monday, raising suspicion that they may have been produced before the shutdown 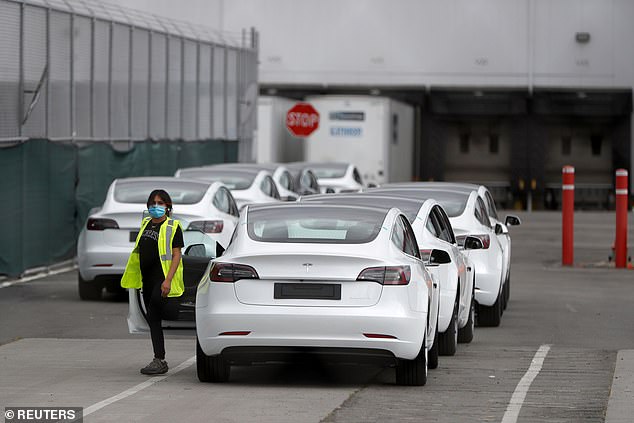 If Musk were to follow through on his plans, moving from a state with the highest income tax rate in the country to one without income tax – like Nevada or Texas – he could save billions of dollars in taxes over the coming years, according to Business Insider.

Tesla did not immediately respond to the DailyMail.com’s request for comment.

It’s not only the rich looking to move away from the Golden State. Californians moving to Texas increased by 36 percent in 2018, according to a 2020 Texas Relocation Report published by Texas Realtors. Figures for those moving to Nevada have also shot up since 2017.

In the hours after Musk’s warning, Texas and Nevada politicians clambered to offer the billionaire sanctuary in their states.

His latest compensation program may be playing a factor in his threats. Though not awarded yet, the package has earned him $708million in its latest sum, which would see him pay California $104million.

If he moved to Texas or Nevada, he would avoid the 13 percent tax rate and keep all of the cash.

Over time, the package is expected to earn Musk $55billion and California would take a cut of $7billion. If he moves to an income tax-less state, he wouldn’t have to cough up a cent. 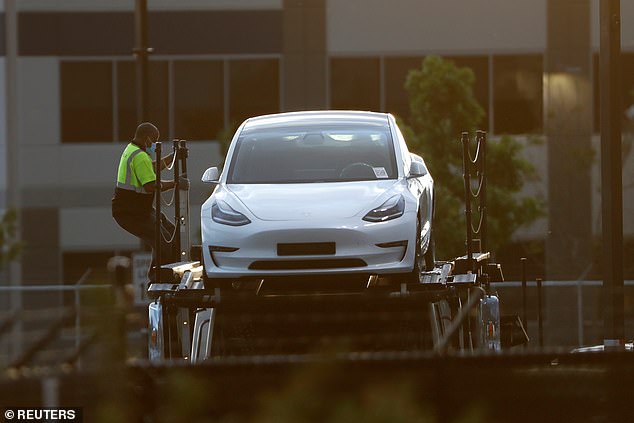 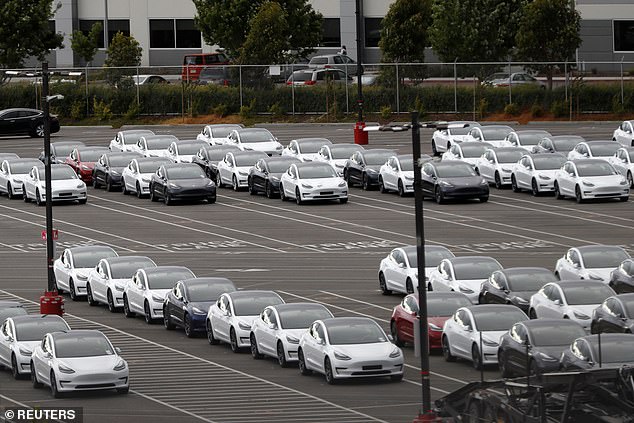 New Tesla electric vehicles are seen in a lot at the Fremont plant. It’s believed they were produced prior to the plant’s closure on March 23 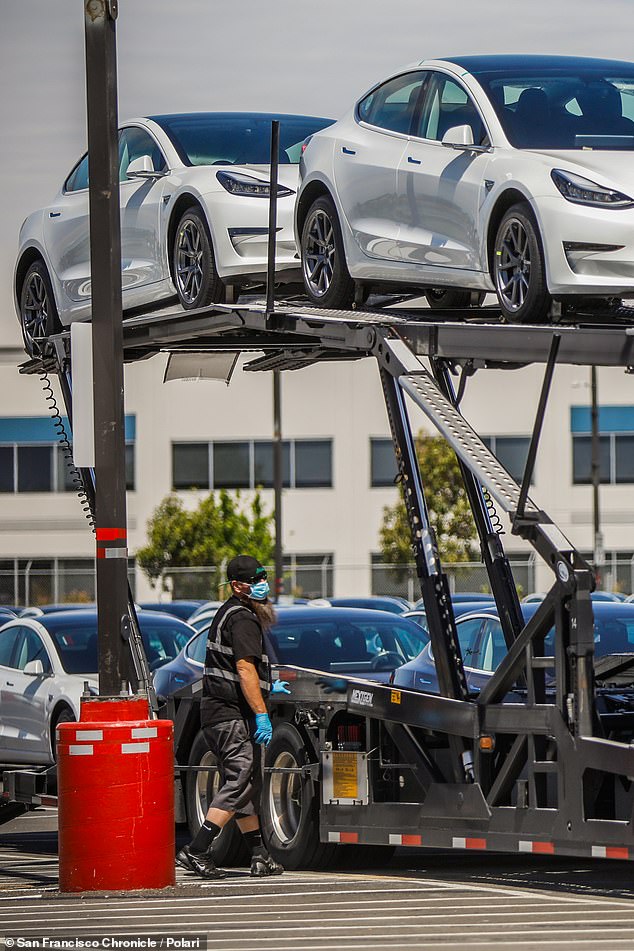 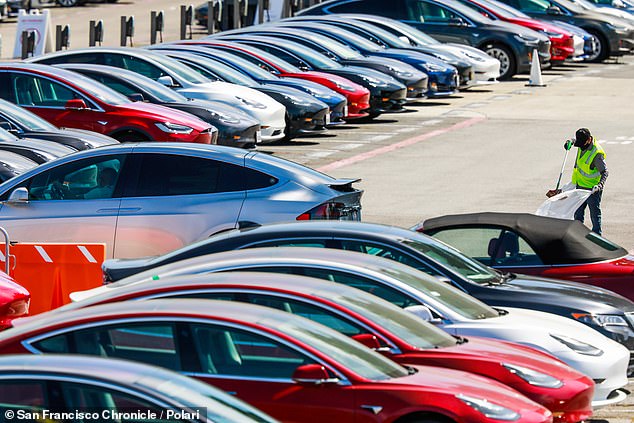 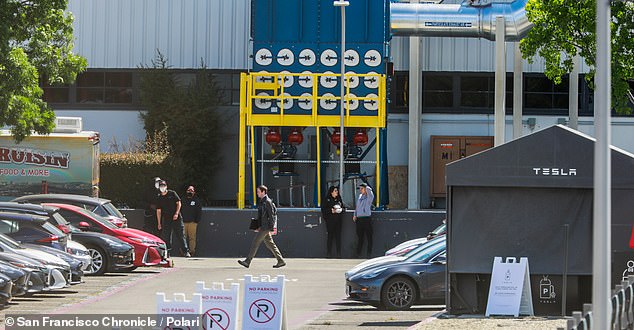 The controversial tweets come as the latest salvo in an ongoing war between Musk and Alameda County, after Tesla filed a lawsuit against local officials on Saturday for ordering the the Fremont facility to shutter until June.

Musk called the order ‘super messed up’ in a separate tweet Monday, claiming that ‘all other auto companies in US are approved to resume. Only Tesla has been singled out’.

According to Business Insider, three employees said Tesla asked workers to return to the facility with phone calls and text messages. If they refused, they risked losing their jobs, the sources claimed.

Employees were seen reporting to the plant before sunrise on Monday in footage from local media outlet KPIX.

Within hours, the parking lot was nearly full at the plant – which employs 10,000 workers – and semis were seen driving off loaded with vehicles that may have been produced before the shutdown. The Verge reports the company has since completed work on around 200 Model Y and Model 3 vehicles.

Adding to the uncertainty of the day was the fact that Tesla had just appointed a new person to head of production at the factory.

An internal email obtained by Tech Crunch informed employees that Richard Miller, formerly director of paint operations at Tesla, had been promoted to lead production.

‘Due to excellent performance as head of paint operations in Fremont, Richard Miller is hereby promoted to overall head of Fremont Production. Congratulations!’ the email reads.

It appears that Miller replaces Jatinder Dhillon, who was the company’s manufacturing director before he reportedly left the company a little over two months a go, per CNBC. However, Dhillon’s LinkedIn profile indicates he is still in the same role.

Tesla did not immediately respond to DailyMail.com’s requests for comment about the leadership shake-up.

It wasn’t immediately clear how local authorities planned to respond to the reopening of the Fremont plant. Alameda County Sheriff Sgt Ray Kelly said Monday that any enforcement of the order would come from Fremont police.

Geneva Bosques, Fremont police spokeswoman, said officers would take action at the direction of the county health officer. She referred further comment to the Health Department, where a DailyMail.com request for comment has not yet been returned. 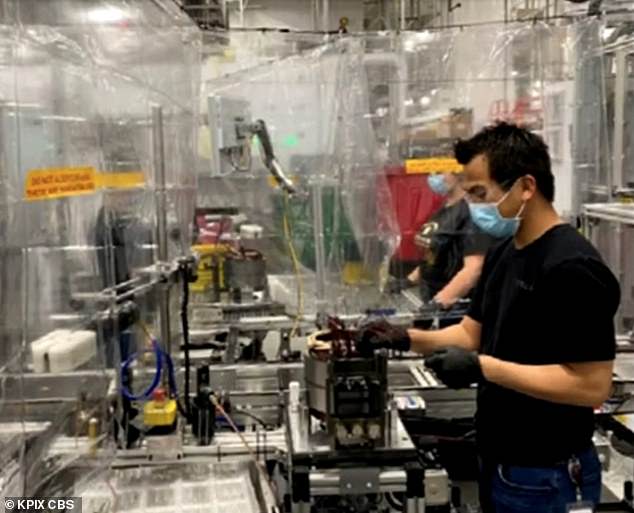 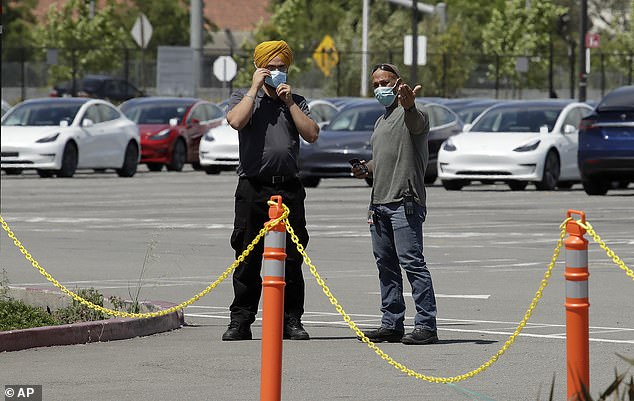 Elon Musk appears to have reopened a Tesla plant in Fremont, California, in defiance of local coronavirus lockdown restrictions. Employees are seen outside the plant on Monday

Under the state’s shelter-in-place orders, only essential business are permitted to operate in California. State law allows a fine of up to $1,000 a day or up to 90 days in jail for operating in violation of health orders.

Musk has consistently pushed for Tesla to be considered essential, routinely voicing his frustration over the continued shutdown of the company’s biggest plant over the last few weeks.

The CEO said the shutdown should be viewed as a ‘serious risk’ to Tesla’s business during an April 29 conference call, and then went on profanity-laden rant about how the shutdowns were antithetical to America’s founding principles.

Earlier Monday, Gov Gavin Newsom said he expected Tesla to be able to reopen the plant sometime next week.

‘My understanding is they have had some very constructive conversations,’ Newsom said during a video press conference. ‘My belief and hope and expectation is as early as next week, they will be able to resume.’

Tesla filed a lawsuit against Alameda County on Saturday after the Fremont plant was shuttered amid the statewide lockdown on March 23.

Musk announced the legal action on Twitter, threatening to move the automaker’s headquarters to another state.

‘Frankly, this is the final straw,’ the billionaire tweeted. ‘Tesla will now move its HQ and future programs to Texas/Nevada immediately. 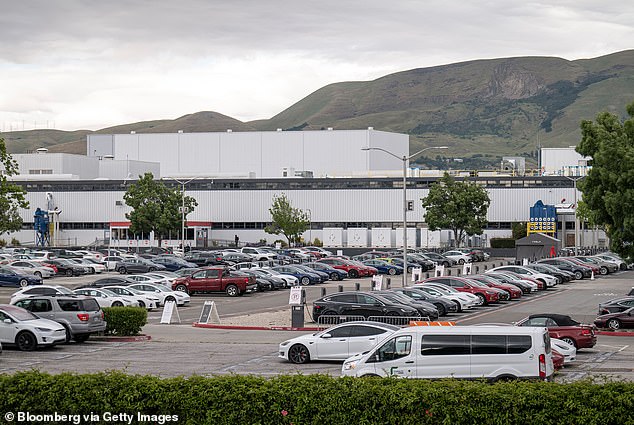 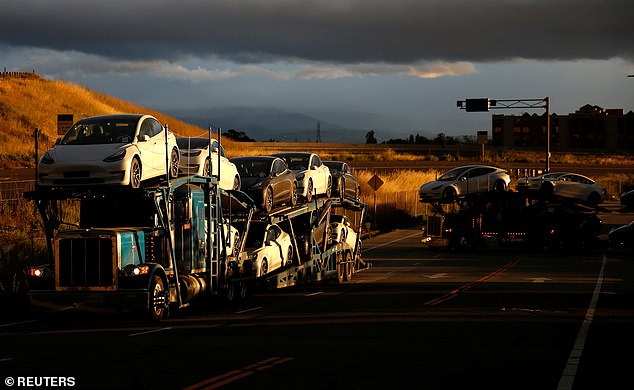 ‘If we even retain Fremont manufacturing activity at all, it will be dependen [sic] on how Tesla is treated in the future.’

In response, officials in Alameda County said they were interacting with the company in good faith and working to balance business needs with the safety of the local area.

‘The team at Tesla has been responsive to our guidance and recommendations, and we look forward to coming to an agreement on an appropriate safety plan very soon,’ a statement from the county said.

‘We need to continue to work together so those sacrifices don’t go to waste and that we maintain our gains. It is our collective responsibility to move through the phases of reopening and loosening the restrictions of the Shelter-in-Place Order in the safest way possible, guided by data and science.’

In a blog post on Saturday, Tesla said the county’s position left it no choice but to take legal action to ensure the company and its employees can go back to work.

The company said it had informed health authorities in Alameda County about its restart plans, but claimed the acting official did not return calls or emails.

Tesla’s lawsuit called the continued restrictions a ‘power-grab’ by the county since California’s governor had said on Thursday that manufacturers in the state would be allowed to reopen.

The company said Alameda was going against the federal and California constitutions, as well as defying the governor’s order, the lawsuit said.

Alameda County is scheduled to remain shut until the end of May, with only essential businesses allowed to reopen. 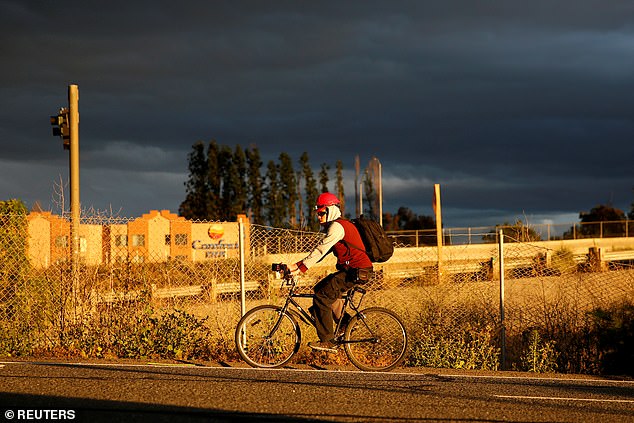 Employees said Tesla asked workers to return to the facility with phone calls and text messages. If they refused, they risked losing their jobs, the sources claimed (pictured: An unmasked employee heads towards the Fremont Tesla plant) 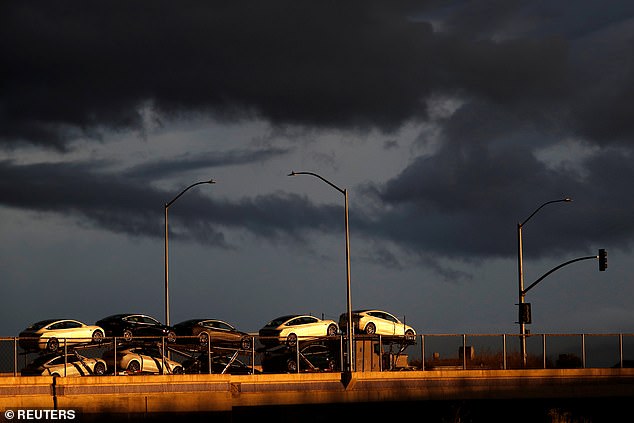 Under the state’s shelter-in-place orders, only essential business are permitted to operate in California. State law allows a fine of up to $1,000 a day or up to 90 days in jail for operating in violation of health orders

The county said it does not consider Tesla an essential business. County officials did not immediately respond to a request for comment on the lawsuit.

Alameda County said on Saturday that it has been working with Tesla to develop a safety plan that ‘allows for reopening while protecting the health and well-being of the thousands of employees’ that work at the factory and that it looks forward to coming to an agreement on a safety plan very soon.

Fremont Mayor Lily Mei expressed concern about the potential economic implications of continuing the shelter-in-place order without provisions for manufacturers such as Tesla to resume.

Mei on Saturday urged the county to work with businesses on ‘acceptable guidelines for re-opening’.

On Monday, US Treasury Secretary Mnuchin told CNBC the state should do ‘whatever [is] needed’ too allow Tesla to reopen.

Musk had told employees on Thursday that limited production would restart at Fremont on Friday afternoon.

Tesla last year built nearly half a million vehicles at the Fremont plant and moving the entire production facility would be a massive undertaking.

Dan Ives, a Wedbush analyst, on Saturday estimated it could take the company 12 to 18 months to relocate production.

The threat to relocate the facility comes as Tesla aims to ramp up production at Fremont of its Model Y sport utility vehicle, which it expects to generate record demand and profit margins.

Musk, who sparred with California officials in March over whether Tesla had to halt production at Fremont, had criticized the lockdown and stay-at-home orders, calling them a ‘serious risk’ to US business and ‘unconstitutional’.

One Democratic lawmaker in the state had some choice words for Musk after he announced his plans to move Tesla’s headquarters.

Gonzalez’s statement drew both praise and condemnation, particularly from people who pointed out the number of job losses if the Tesla factory moves.

‘Texas gets better every day. Good conservative principles make good governance, and attract the best and the brightest. The future is happening in Texas,’ Texas congressman Dan Crenshaw tweeted Saturday.

Nevada congressional hopeful Dan Rodimer tweeted: ‘Nevada NEEDS these jobs most of all right now, @elonmusk. We would love to have you and Tesla HQ right here in the Battleborn State!’