Tesla boss Elon Musk found himself mobbed by fans as he stepped out for dinner in New York City with his girlfriend Grimes ahead of his Saturday Night Live hosting debut this weekend.

The 49-year-old billionaire and his musician girlfriend were joined by SNL star Pete Davidson and producer Lindsay Shookus, who is Ben Affleck’s ex, on Tuesday night after the show’s rehearsals.

They dined at an upmarket Italian restaurant just a few blocks away from SNL’s studio in Manhattan’s Midtown neighborhood.

Musk was mobbed by fans near the restaurant and ended up signing multiple autographs.

At one point, Musk could be seen sitting in the backseat of his car signing a model Tesla car that one fan had handed him.

Charting new territories: Elon Musk capped off his first day of Saturday Night Live rehearsals by having a dinner date with girlfriend Grimes and two of the show’s biggest names

The couple, who have both had COVID-19, wore disposable black face masks as they made their way to the car despite the CDC’s new guidelines saying it only required indoors or in large crowds.

Pete and Lindsay followed closely behind as they rounded out the star-studded dinner.

Musk and his girlfriend’s dinner date came on the same day they celebrated their son X Æ A-Xii’s first birthday.

Elon and Grimes, born Claire Elise Boucher, originally bonded over Twitter before making their official red carpet debut as a couple at the Met Gala in May 2018.

Musk, who is renowned for his controversial tweets, has been touting his SNL hosting gig for more than a week now.

When he was first announced as this week’s host, Musk tweeted alongside a purple devil emoji: ‘Let’s find out just how live Saturday Night Live really is’.

The billionaire also referred to himself as the ‘Dogefather’ in reference to the cryptocurrency Dogecoin, which has seen prices soar since it was first championed by Musk.

The cryptocurrency once again surged 30 percent on Tuesday, with one analyst crediting Musk’s upcoming SNL gig as the reason.

‘Dogecoin is surging because many cryptocurrency traders do not want to miss out on any buzz that stems from Elon Musk’s hosting of Saturday Night Live,’ Edward Moya, a senior market analyst at Oanda, said. 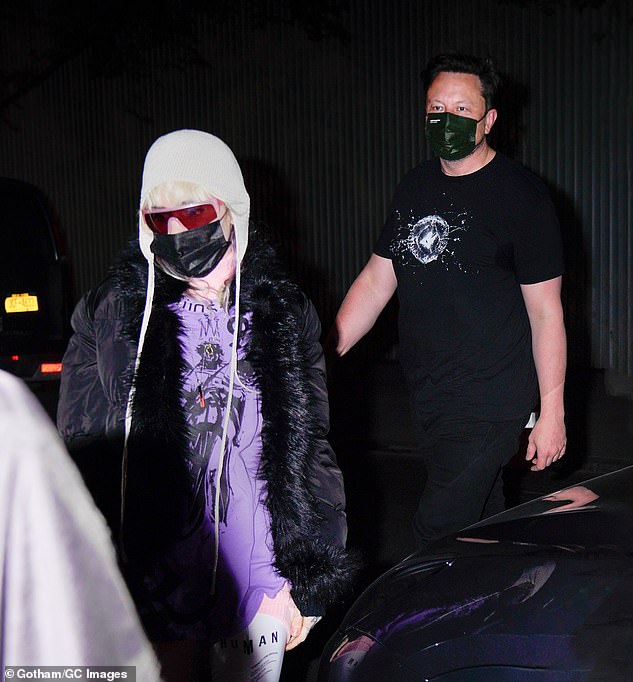 Innovative duo: The superstar couple, aged 49 and 33 respectively, were casually-clad as they stepped out with Pete Davidson, 27, and Lindsay Shookus, 40, in New York on Tuesday ahead of his much-anticipated appearance on the show

Gang’s all here! Elon and Grimes were joined at dinner by SNL funnyman Pete Davidson (L) and SNL producer Lindsay Shookus (R), who’ve both made headlines for their respective celebrity flings 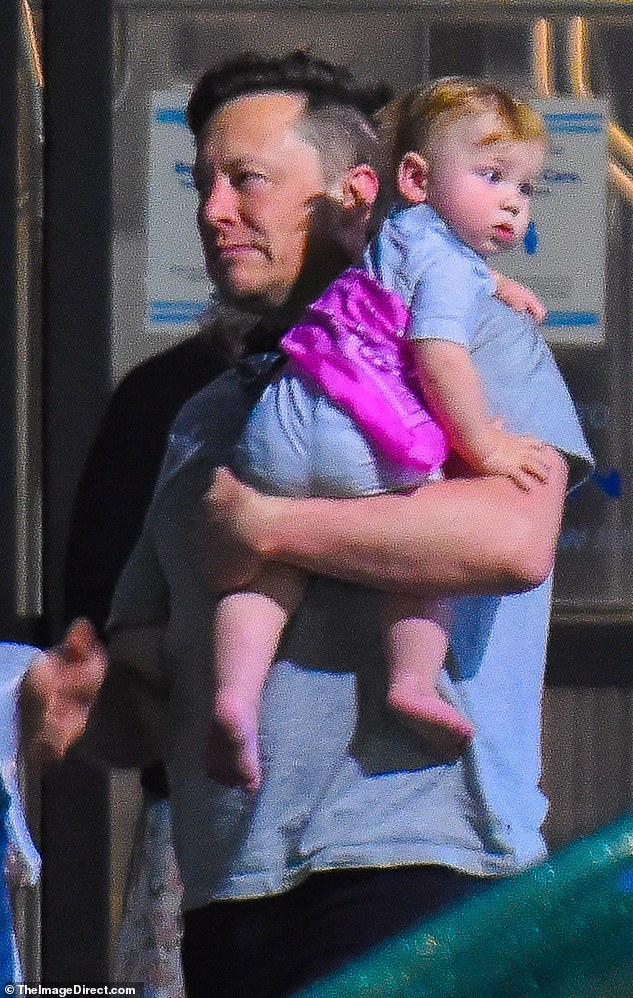 Adorable: Elon was seen with their little boy earlier in the day 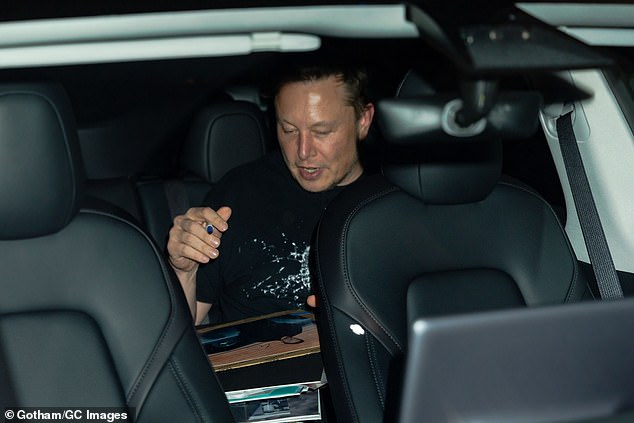 When asked if he could perform any impersonations, Elon scoffed: ‘I don’t know. Do I seem like an actor?’

Musk has also repeatedly tweeted out suggestions for SNL skits that he could take part in while on the show.

He tweeted about his desire for a Godfather-style SNL sketch about the trendy cryptocurrency Dogecoin asking fans: ‘Is Doge your number one choice? We’ll see…’

It is not yet clear if those sketches will become a reality.

Cast members Michael Che and Pete Davidson have since publicly expressed excitement over Musk hosting – despite a wave of controversy about the decision.

‘He’s the richest man in the world, how could you not be excited for that?’ Che told Late Night with Seth Myers.

Davidson, ahead of his dinner with Musk, joked to Meyers that he was going to ask the billionaire for a free Tesla.

When asked if he would go to space for Musk, or even smoke a joint with him, Davidson responded: ‘100,000 percent’.

‘That guy’s a genius. I don’t know why people are freaking out. They’re like, ”I can’t believe that Elon Musk is hosting.” And I’m like, ”The guy that makes the Earth better kind of, makes cool things and sends people to Mars?”,’ he said.

Davidson, himself, has been the subject of controversy after it emerged he broke COVID-19 quarantine rules in the UK after flying to visit his Bridgerton star girlfriend Phoebe Dynevor. 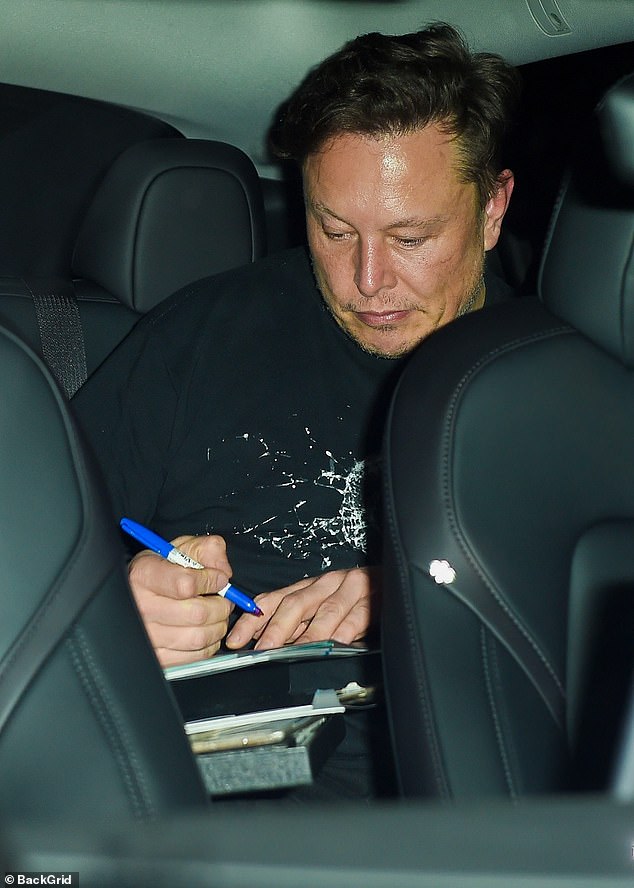 Ready to entertain? Only time will tell if the SNL writers and producers will also get on board with Musk’s ideas about The Dogefather and Baby Shark Tank 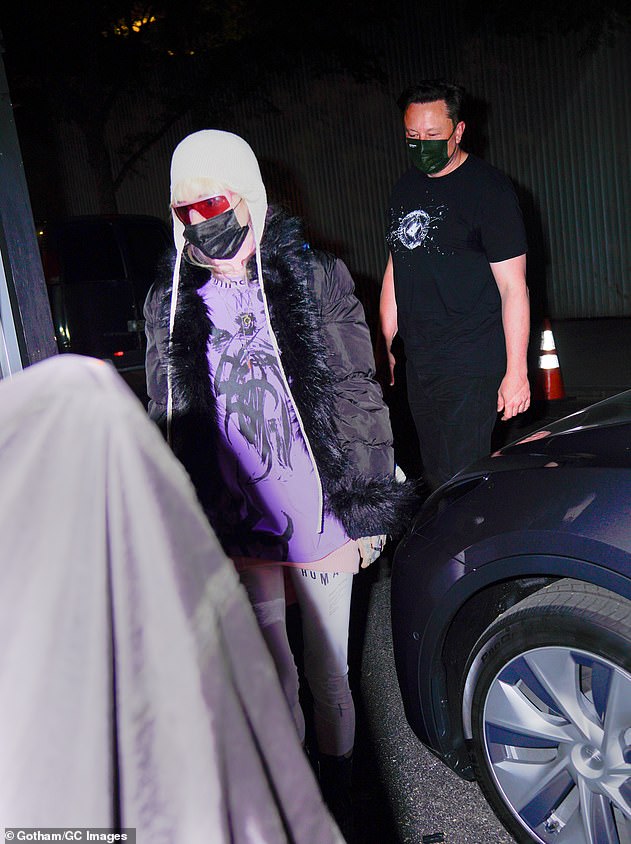 Still going strong! Elon and Grimes (born Claire Elise Boucher) originally bonded over Twitter before making their official red carpet debut as a couple at the Met Gala in May 2018 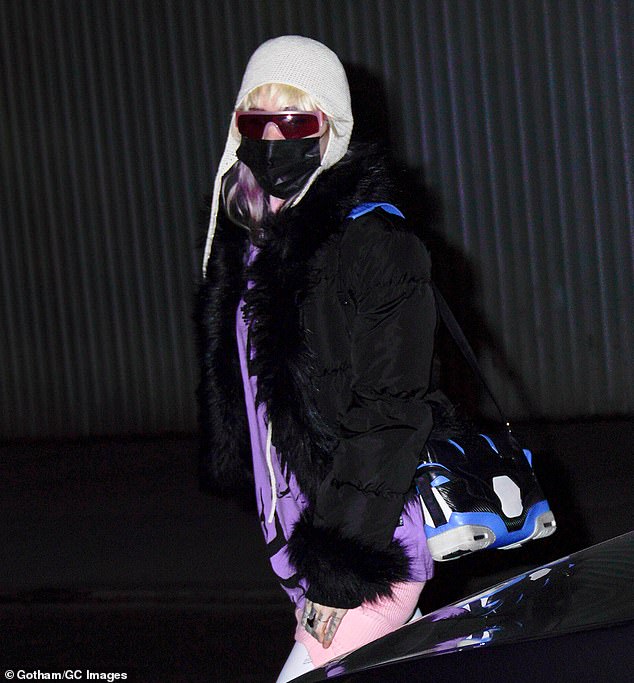 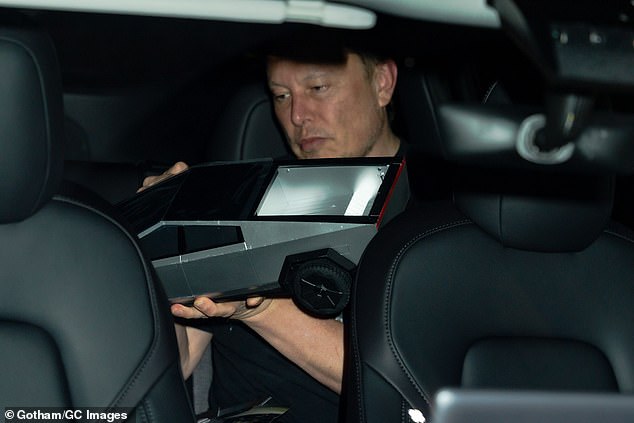 New toy: One of the autograph seekers handed Musk a small model of a car, which he closely examined once safely inside his Tesla Model X

Grammy nominee Miley Cyrus, who will be SNL’s musical guest, tagged Elon in a supportive message on Tuesday following the controversy about him hosting.

The pop diva – who boasts 236.9M social media followers – wrote in the caption: ‘Imma keep workin’ from dawn to dusk so I can keep buyin’ cars off @ElonMusk,’n.

Despite the controversy about having him host the show, the Tesla CEO told TMZ he felt ‘good’ about it considering he’s watched the NBC sketch show since he was in college in the nineties.

When asked if he could perform any impersonations, Elon scoffed: ‘I don’t know. Do I seem like an actor?’ 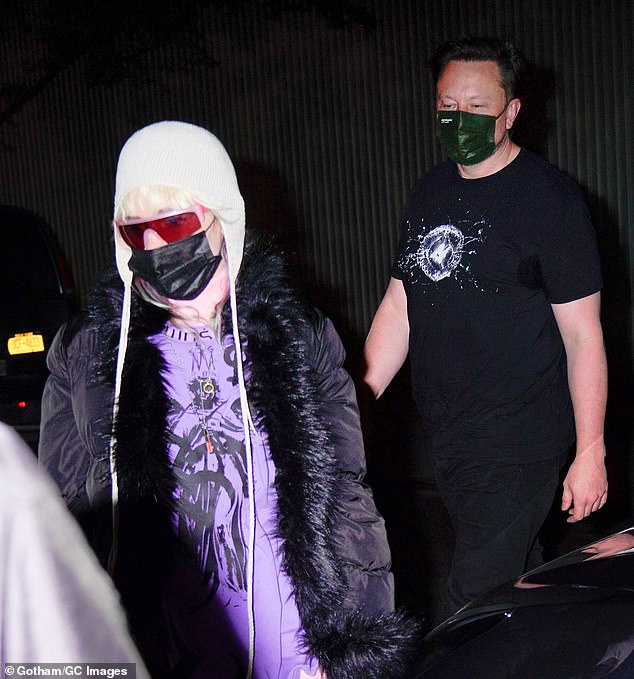 They’ve both survived bouts with COVID-19: The cerebral couple wore disposable black face masks despite the CDC’s new guidelines to only do so indoors or in crowds 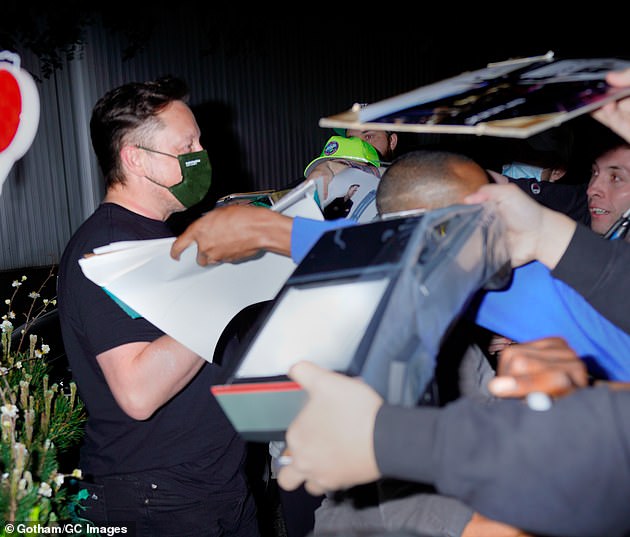 Greeting his public: And it’s a good thing Elon did since he stopped to sign autographs for several waiting fans 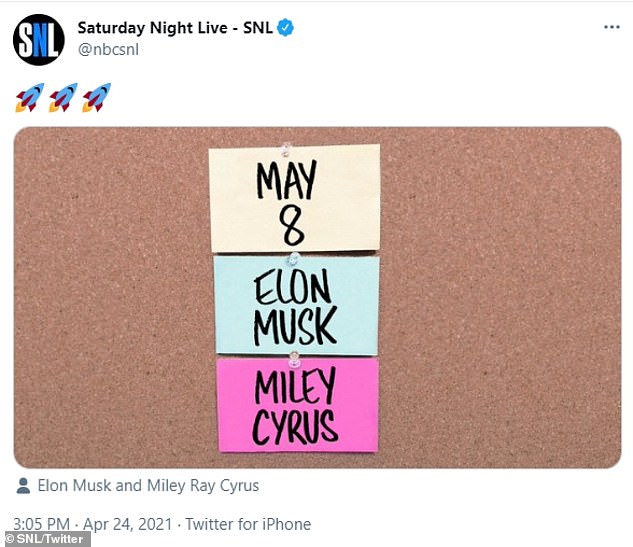 A source told Page Six last Friday: ‘SNL boss Lorne Michaels won’t ever make cast members do anything they don’t want to do…Whether you like him or not, Elon is a very interesting character. He’s very much a showman’ 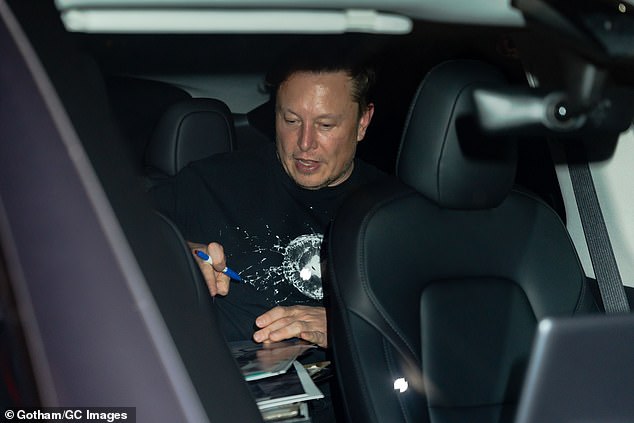 Big fan: That morning, the Tesla CEO told TMZ he felt ‘good’ about his controversial SNL debut considering he’s watched the NBC sketch show since attending college in the nineties

After Musk initially tweeted he wanted to find out how live SNL really was, Bowen Yan wrote on his Instagram story: ‘What the f*** does this even mean?’

Aidy Bryant put up an Instagram story quoting a March 25 tweet from Senator Bernie Sanders about the ‘moral obscenity’ of the ’50 wealthiest people owning more than 165M Americans’.

Following the controversy, a source told Page Six last Friday that ‘No cast members have pulled out of the show yet’ as a result of Musk’s hosting gig.

‘SNL boss Lorne Michaels won’t ever make cast members do anything they don’t want to do…Whether you like him or not, Elon is a very interesting character. He’s very much a showman.’ 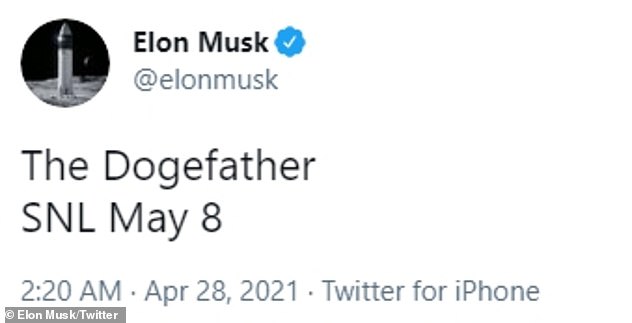 Musk reiterated his desire for a Godfather-style sketch about the trendy cryptocurrency Dogecoin asking fans, ‘Is Doge your number one choice? We’ll see…’

Earworm: The thrice-divorced father-of-six was so excited about a ‘Baby Shark Tank’ skit he dreamed up last Saturday that he started singing the infectious 2016 children’s song 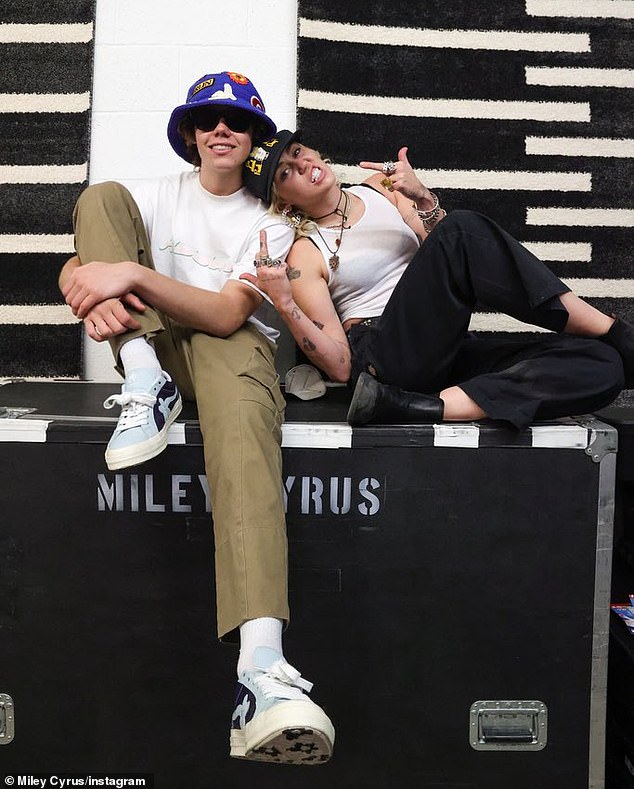 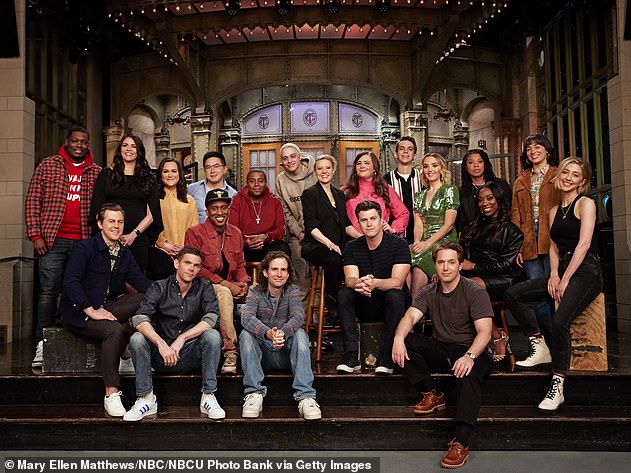 ‘No cast members have pulled out of the show yet’: However, at least two of the not ready for primetime players have spoken out against the idea of Musk taking the stage at Studio 8H 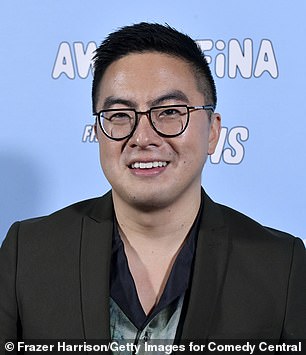 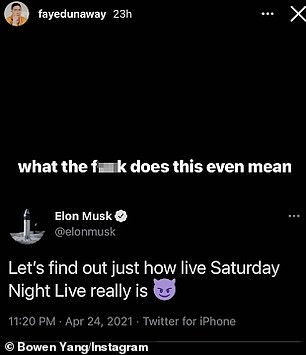 When the industrial designer wisecracked, ‘Let’s find out how live Saturday Night Live really is’ – Bowen Yang Instastoried: ‘What the f*** does this even mean?’ 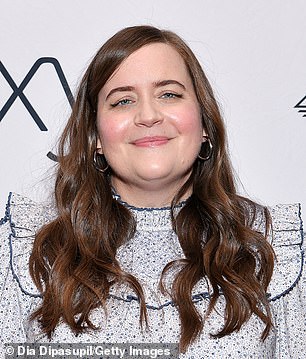 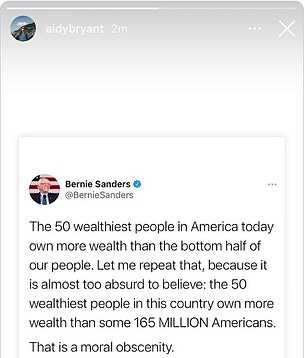