Project Jarvis was revealed last month, and is designed to be a fully reusable rocket prototype for the Blue Origin New Glenn, that lands vertically, like SpaceX’s Starship.

Twitter user SpaceXMasterrace shared a photo of the prototype tanks at the Blue Origin Texas facility, with the caption ‘Hey Elon, Can I Copy Your Homework.’

This prompted the SpaceX CEO to reply with a pair of ‘rolling on the floor laughing’ emoji, indicating he agreed with the suggestion Blue Origin was copying SpaceX.

This is the latest in the spat between the two space billionaires, coming after Blue Origin put out a series of infographics claiming the SpaceX lunar lander was ‘unsafe’ after NASA awarded the sole contract to SpaceX, rather than to multiple firms.

Musk has also fired his share of barbs at Bezos, including a tweet saying Blue Origin ‘Can’t get it up (to orbit)’ over the firm filing a protest against NASA. 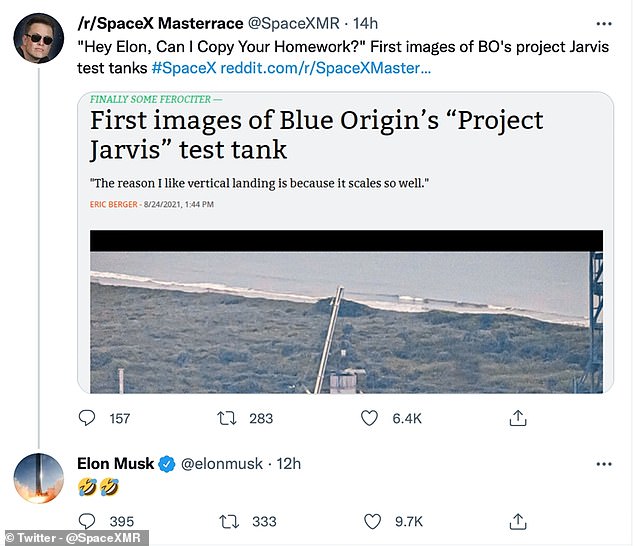 Twitter user SpaceXMasterrace shared a photo of the prototype tanks at the Blue Origin Texas facility, with the caption ‘Hey Elon, Can I Copy Your Homework’

Blue Origin and SpaceX are set to compete for heavy lift launches with the New Glenn and Starship rockets.

The feud between two of the wealthiest men in the world goes back to 2004, when they had a disagreement over their space ambitions, and has slowly simmered since.

They have both long-harboured space ambitions, with Bezos founding Blue Origin in 2000 and Musk founding SpaceX in 2002, both to build reusable rockets.

The animosity really came to a head in 2013, when Jeff Bezos led a campaign to block SpaceX from having exclusive use of a NASA launchpad.

Musk called it a ‘phoney blocking tactic’ and called out Blue Origin for not even creating a reliable suborbital spacecraft ‘despite spending over 10 years in development’ – something achieved two years later in 2015 with New Shepard.

Over the last decade and a half, Musk has regularly called out Bezos for copying SpaceX – with both firms aiming for similar markets and bidding on the same contracts with NASA and other agencies.

There was a patent battle between the two in 2014 when Blue Origin was granted one for drone ships used for landing rocket boosters, which SpaceX won and forced Blue Origin to withdraw most of the patent claims.

There have also been arguments over hiring practices, with Musk accusing Bezos of stealing talent away. 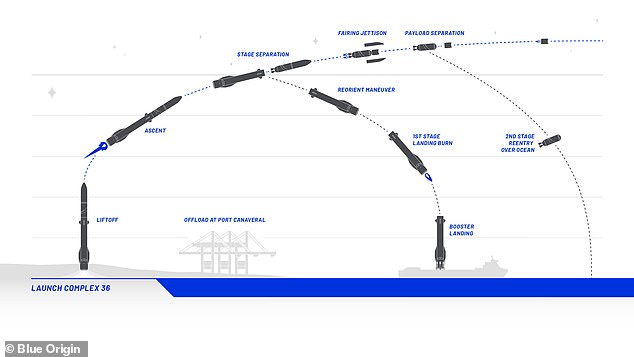 New Glenn lifts off from Launch Complex 36 at Cape Canaveral. Following stage separation, the first stage flies back to Earth and lands nearly 1,000 km downrange on a moving ship, allowing the booster to land in heavy sea-states 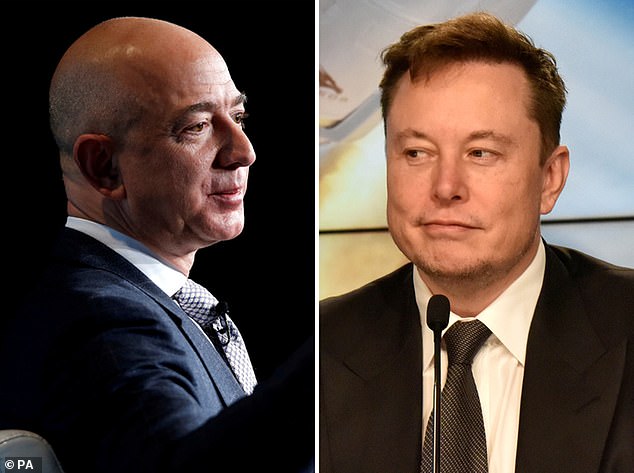 Jeff Bezos (left) and Elon Musk (right) have been locked in a spat since 2004, shortly after the pair launched their respective space firms

After NASA announced Space X would be the sole contractor for the lunar lander contract, Elon Musk tweeted that rival Jeff Bezos’ Blue Origin ‘can’t get it up (to orbit)’

The latest tweet from Musk could well further escalate as the two bid to build the biggest rockets.

The first photos shared of the prototype looked remarkably similar to the early prototypes of the SpaceX Starship, which is what led to Musk ‘laughing’ at a tweet suggesting Blue Origin was copying SpaceX’s homework.

On the lunar lander, in July, Blue Origin claimed NASA had ‘moved the goalposts at the last minute’ and, ‘in NASA’s own words… made a ‘high risk’ selection.’ 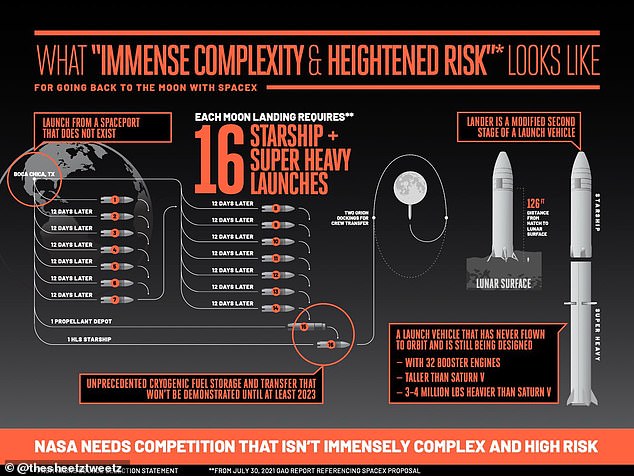 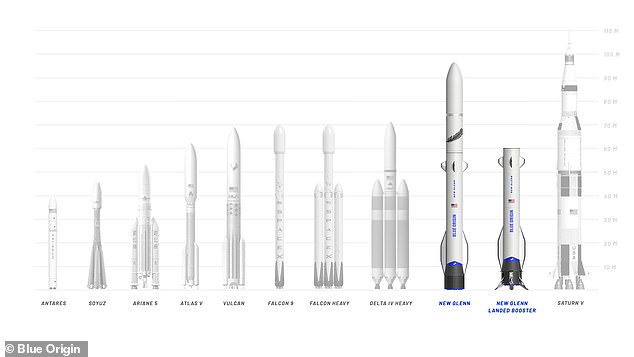 Blue Origin shared this infographic showing its New Glenn rocket, which will be larger than the SpaceX Falcon 9, although will be smaller than Starship, which is larger than Saturn V

This appeal, that accused NASA of ‘moving the goalposts at the last minute,’ was denied by officials, prompting Musk to say: ‘If lobbying and lawyers could get u to orbit, Bezos would be on Pluto [right now]’

It released an infographic that added that Starship is ‘a launch vehicle that has never flown to orbit and is still being designed.’

The first orbital launch is due within the next few months, according to SpaceX.

However, SpaceX has more than 100 successful orbital launches with its Falcon 9 rockets, while Bezos’ company has yet to reach orbit.

In response to the infographic Musk tweeted: ‘The sad thing is that even if Santa Claus suddenly made their hardware real for free, the first thing you’d want to do is cancel it.’ 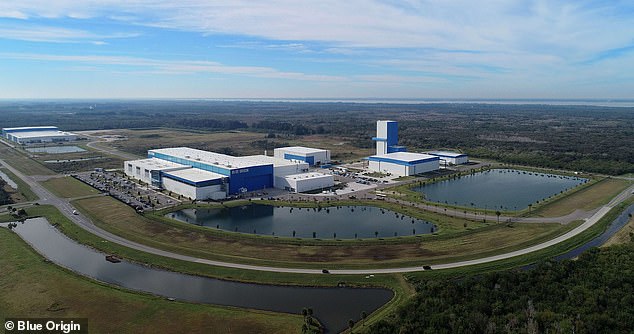 The latest tweet from Musk, sending a jibe at Bezos over the Project Jarvis rocket tanks could well further escalate as the two bid to build the biggest rockets 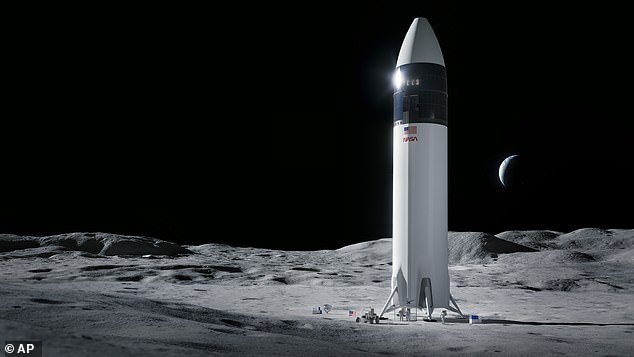 When Blue Origin first filed the lawsuit against NASA, Musk tweeted that Bezos would be on Pluto by now ‘if lobbying and lawyers could get you to orbit’.

They have very different goals for space, with Musk’s primary aim to build a sustainable colony on Mars and Bezos wanting to move humans to space.

In fact, after he travelled to the edge of space in the New Shepard rocket in July, Jeff Bezos said he one day envisioned polluting industry being moved to Earth orbit.

It is unlikely the spat between the pair will end any time soon, thanks to an ongoing court case delaying the SpaceX lunar lander project, and a battle to see who has the biggest rocket.