Elon Musk ‘moves the needle on bitcoin as crypto soars to $48,000 on back of Tesla investment

Elon Musk ‘moves the needle’ on bitcoin as crypto soars to $48,000 on back of Tesla investment

Bitcoin hit record highs above $48,190 today after the shock announcement yesterday that Tesla had snapped up $1.5billion (£1.1billion) of the cryptocurrency.

The seven percent jump came on top of the cryptocurrency’s jump of 18 percent yesterday to $45,000 on the back of Elon Musk’s investment, which one analyst said ‘moves the needle’ on bitcoin.

However this afternoon it retreated to stand at $46,520 as markets digested the implications of the tech supremo’s vote of confidence. Tesla’s shares gained 2 percent on the Nasdaq yesterday but gave up most of that rise today with a 1.6 percent drop to $850.

Maverick: Tesla boss Elon Musk sent the price of Bitcoin to a record high after the electric car firm invested £1.1bn in the cryptocurrency

Simon Peters, crypto asset analyst at multi-asset investment platform eToro, said Musk’s move to invest in bitcoin via tesla and start accepting it as payment for its own products ‘really moved the needle’.

‘Already there is talk of copycat moves from Apple and Google, linking it to their own payment systems,’ he said.

‘The shift to digital consumption is growing. We expect to see others follow in Tesla’s footsteps, with bitcoin payments increasingly making sense for businesses that conduct nearly all their sales online.

‘We believe other companies will also look to hold some bitcoin as both a diversifier and as an insurance policy against the devaluation of other currencies.’

But the decision to put Tesla cash into the cryptocurrency raised eyebrows elsewhere, with some observers describing the move as bizarre.

The electric car maker went to shareholders to raise a fresh £3.6billion back in December as founder and chief executive Elon Musk (pictured) said he wanted to ramp up production in China.

At the time Musk said: ‘We’re trying to spend money at the fastest rate that we can possibly spend it and not waste it. That’s our current plan. It’s quite hard to spend money without wasting it.’

In a stock market filing in the US, Tesla said it had ‘updated its investment policy and had been looking to invest in ‘reserve assets such as digital currencies, gold bullion or gold exchange-traded funds.

The company is not short of cash and has £15billion on the balance sheet to play with. Tesla also said it would allow customers to buy cars using the currency.

‘We expect to begin accepting bitcoin as a form of payment for our products in the near future,’ the company said.

Bitcoin can already be used as payment for many everyday products like Starbucks coffee as well as in supermarkets such as Whole Foods, but it is not widely accepted for big-ticket items.

Tesla cars are expensive with a top-of-the-range Model S costing around £60,000, although the cheapest models come in at a more affordable $28,000. 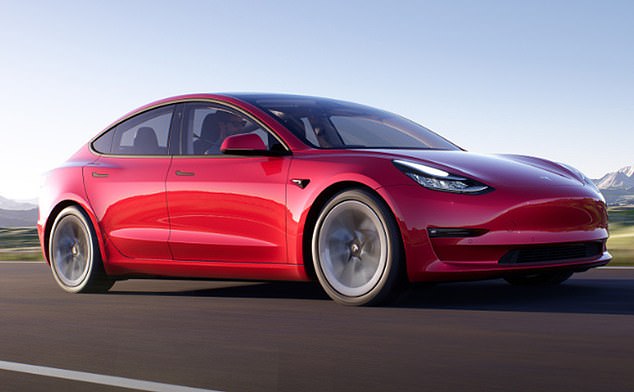 Tesla cars are expensive with a top-of-the-range Model S costing around £60,000, although the cheapest models come in at a more affordable $28,000.

Connor Campbell, the analyst at Spreadex, said: ‘Musk has shown he is not fussed about responsibility to his investors. Buying into Telsa is buying into Musk as a person. But professional investors will be p****d off.’

Many believe that bitcoin could be heading for a slump this year as the central bank’s around the world have vowed to crack down on the crypto-currency.

Tesla also warned that investing in the currency could end in tears for the company and its investors. It said: ‘The prices of digital assets have been highly volatile.

‘The prevalence of such assets is a recent trend and their long-term adoption by investors, consumers and businesses is unpredictable.

Their lack of a physical form and their reliance on technology for their creation may subject them to the threat of malicious attacks and technological obsolescence.

‘If we hold digital assets and their values decrease relative to our purchase prices, our financial condition may be harmed,’ Tesla said.

Bitcoin has a market cap of $868billion, meaning the electric car maker now holds 0.17 percent of the cryptocurrency market.

Other major holders include hedge funds Tudor Investment Corporation and US billionaire Stanley Druckenmiller. Both are understood to own around 2 percent of the market.