Tesla has given the first look at its new tabless battery cell, dubbed 4680, and Roadrunner production line that, according to CEO Elon Musk, ‘will make full-size cars in the same way to cars are made.’

The tabless battery was first unveiled in September during the firm’s Battery Day, but was only shown by Musk via a PowerPoint presentation.

Now, the time has come for Musk to show the world what Tesla has been working on at its pilot battery factory in Fremont, Texas.

The one-minute clip shows the white and blue battery moving through different assembly stages with the help of armed and wheeled robots.

Tesla also used this opportunity to announce it is taking applications for manufacturing jobs at its planned battery facilities in Berlin and Texas.

Tesla has given the first look at its new tabless battery cell, dubbed 4680, and Roadrunner production line

The tabless cell was unveiled in September 2020 at Telsa’s Battery Day that was deemed a failure after Musk promised to cut electric costs so radically that a $25,000 self-driving electric car will be possible – but revealed it would not happen for at least three years.

At the event, Musk also said that 4680 was being produced in low volumes at a ‘pilot plant’ in Fremont, Texas, but the video suggests the plant is expanding and the firm is looking to fill positions.

The job posting says Tesla is looking to hire in engineering, manufacturing, materials, equipment and operations.

Along with the video, Musk also says the Roadrunner production line pulls inspiration from high volume industries like food and beverages, medical devices and toys. 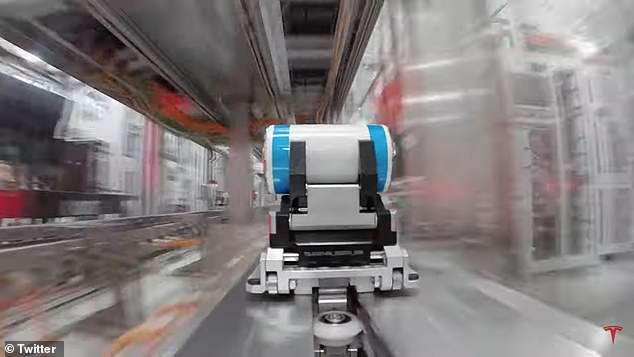 Along with the video, Musk also says the Roadrunner production line pulls inspiration from high volume industries like food and beverages, medical devices and toys

Musk said in September that eliminating the tabs on a battery allows for continual motion through the system, which provides six times the power and enables a 16 percent range increase to vehicles.

For the design, Tesla took the existing foils of traditional batteries and created a laser pattern to form dozens of connections in the material.

Not only does it provide benefits to vehicles, but the design is easier to manufacture, needs fewer parts and without tabs it has a shorter electrical path length. 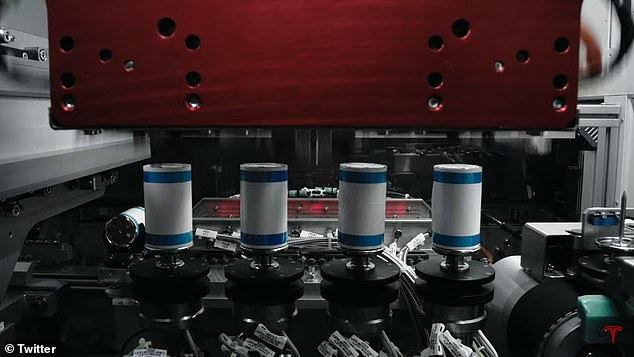 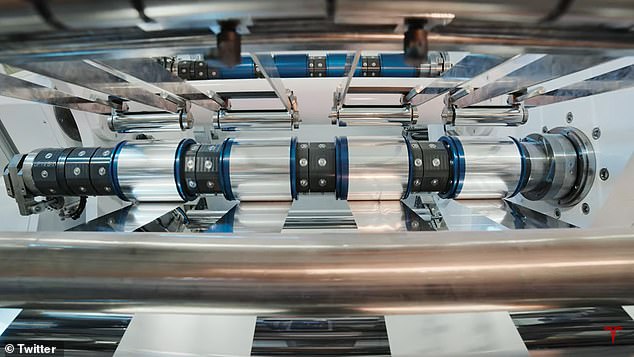 The video gives the public a first look at Telsa’s production line inside its pilot factory located in Freemont, Texas that is specifically used to make the 4680 tabless batteries

By reducing the distance the electron has to travel, the cell has less thermal issues and a shorter path length in a larger tabless cell, according to Musk, who explained that though the cell is bigger, it measures 80 millimeters in length, the power to weight ratio is better than a smaller cell with tabs.

‘This is quite hard to do,’ said Musk.

‘Nobody’s done it before. So.. It really took a tremendous amount of effort within Tesla engineering to figure out how do we make a fricking tabless cell and make it actually work and connect it to the top cap.’

However, when the CEO took the stage at Tesla’s Battery Day he only presented a PowerPoint presentation and not a physical cell.

‘Nothing Musk discussed about batteries is a done deal,’ said Roth Capital Partners analyst Craig Irwin. ‘There was nothing tangible.’ 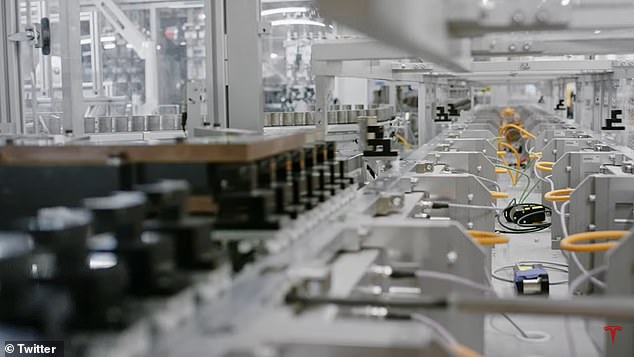 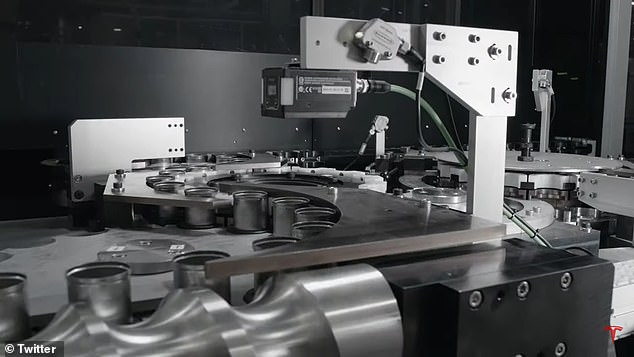 Investors had expected two significant announcements at Musk’s oft-touted ‘Battery Day’: The development of a ‘million mile’ battery good for 10 years or more, and a specific cost reduction target – expressed in dollars per kilowatt-hour – that would finally drop the price of an electric vehicle below that of a gasoline car.

Musk offered neither. Instead, he promised over the next several years to slash battery costs in half with new technology and processes and deliver an ‘affordable’ electric car.

‘In three years … we can do a $25,000 car that will be basically on par (with), maybe slightly better than, a comparable gasoline car,’ Musk said.

Musk acknowledged that Tesla does not have its ambitious new vehicle and battery designs and manufacturing processes fully complete. Tesla has frequently missed production targets set by Musk.

Tesla expects to eventually be able to build as many as 20 million electric vehicles a year.