And Elsa Hosk has been enjoying e very minute bonding with her baby girl.

On Saturday, nearly eight months since becoming a mother for the first time, the Swedish model was back out for another stroll with baby Tuulikki near their Pasadena home.

And on more than one occasion Hosk lit up the sunny afternoon sky with a big beaming smile when the two found themselves playing a bit of baby talk during a brief stop.

Mommy-daughter time: Elsa Hosk, 32, took her nearly eight-month-old daughter Tuulikki for a stroll near her home in the Pasadena neighborhood of Los Angeles on Saturday

The catwalk queen opted for casual-cool comfort in the fashion department when she stepped out in blue denim jeans and a purple and green-patterned shirt that could have been mistaken for a light jacket.

She also wore a pair of black leather shoes and stylish sunglasses as she made her way through the suburban streets while carrying a dark blue Celine purse.

On this day, she styled her blonde tresses long and straight with a part in the middle. 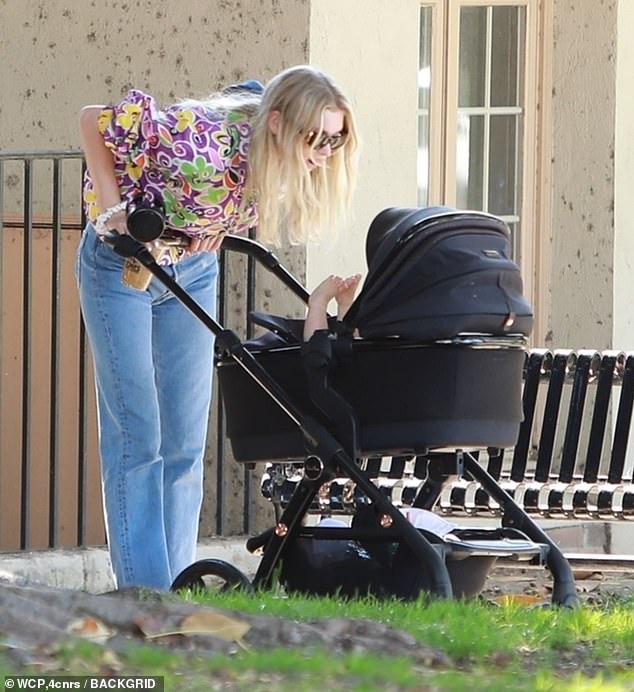 Adorable: The Swedish model lit up the sunny afternoon sky with a big beaming smile when the two found themselves playing a bit of baby talk during a brief stop 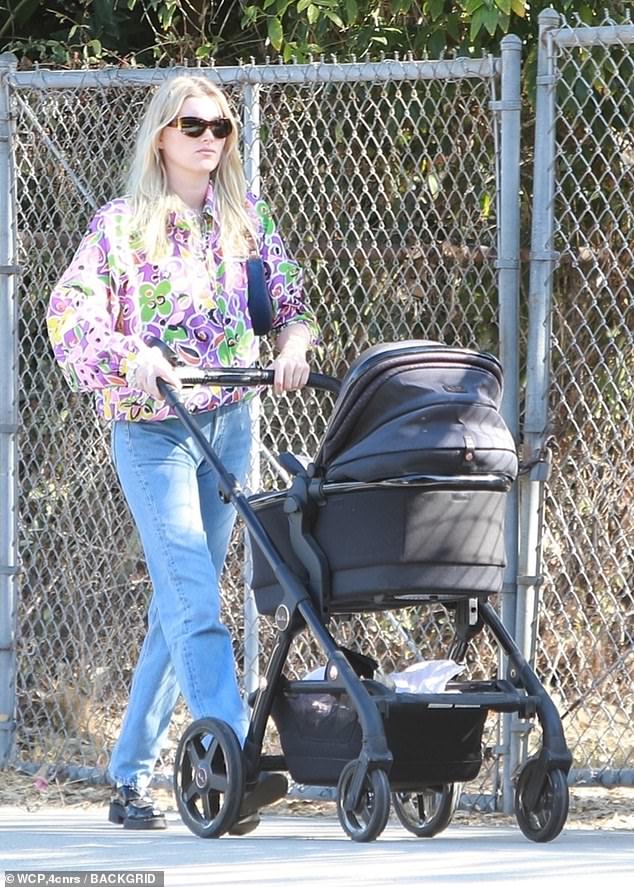 As she pushed the stroller, baby Tuulikki laid back comfortably nearly the entire walk.

But then there were times when the toddler caught the attention of her mother, seemingly with a burst of enthusiasm, which prompted all the baby talk banter between the two.

At one point, Tuulikki could be seen lifting her feet and tiny legs up towards the sky.

Hosk appeared to be overjoyed by all the movement and her girl’s apparent attempt to communicate with her mother. 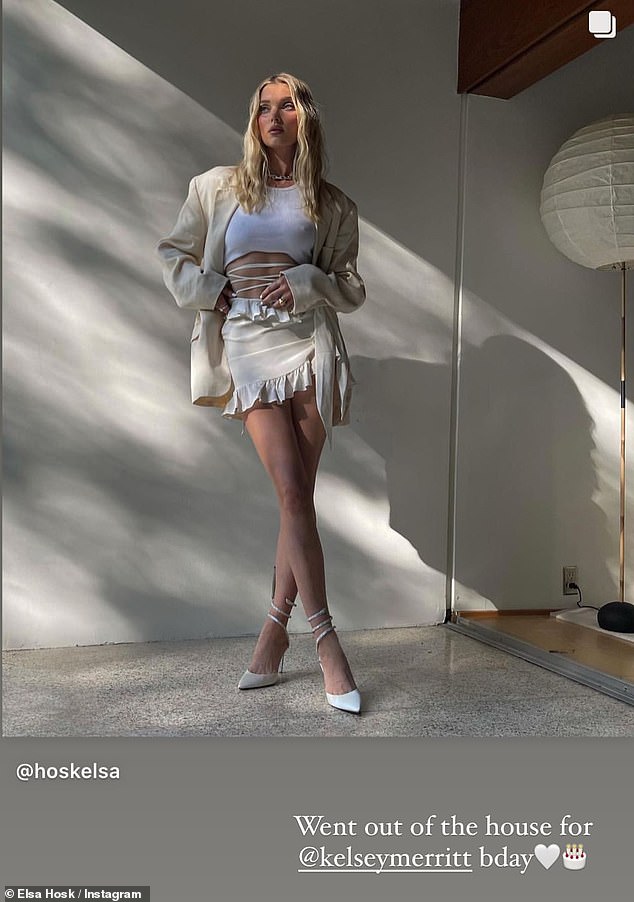 Weekend outing: The former Victoria’s Secret Angel took to Instagram on Saturday and revealed she slipped into a sexy outfit and ‘went out of the house for Kelsey Merritt’s birthday

The former Victoria’s Secret Angel, who was back modeling some seven weeks after giving birth, took to Instagram on Saturday and shared a series of snaps where she flaunted her midriff in a white and cream-colored ensemble.

‘Went out of the house for @kelseymerritt bday,’ she wrote across the bottom of one photo, in reference to the model who’s best known for being the first Filipino to walk in the Victoria’s Secret Fashion Show, and for appearing in the pages of the coveted Sports Illustrated Swimsuit Issue.

Her outfit consisted of a skimpy wrap skirt that tied along the waist, crop top, and a matching blazer and heels. 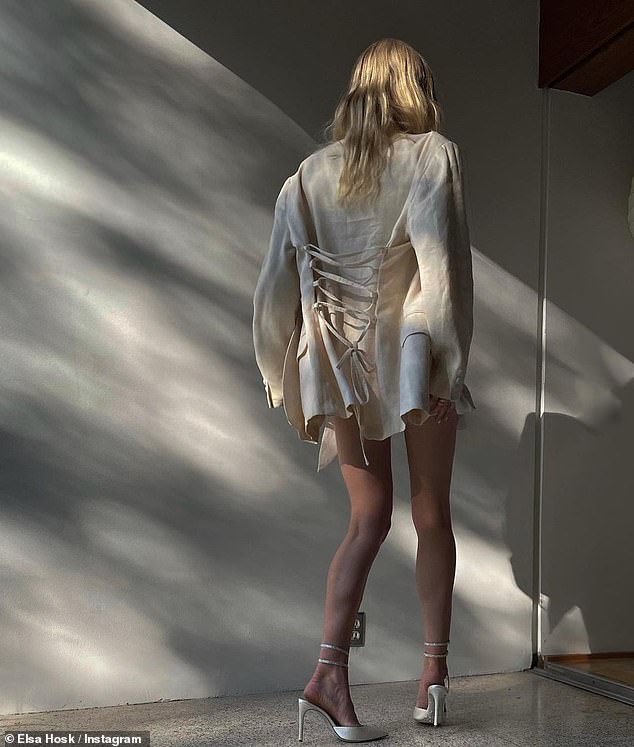 Working it: Hosk would strike a number of poses in her ensemble that consisted of a skimpy wrap skirt that tied along the waist, crop top, and a matching blazer and heels

Hosk would give both front views of the outfit, and then spin around for a view of her backside, which gave her 6.9 million Instagram fans and followers a different view of her statuesque figure.

The fashionista and her longtime partner and baby daddy, Tom Daly, moved their primary residence from New York City to Los Angeles near the end of 2020.

The couple and their daughter now live in a $4.3 million five-bedroom home in South Pasadena. 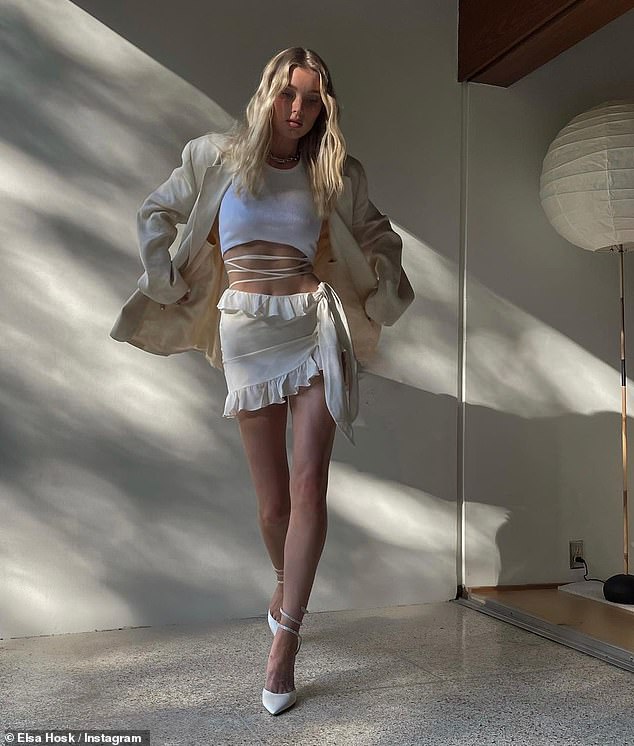 Working mom: Hosk was back modeling just seven weeks after giving birth to her daughter