Elsa Hosk is being body shamed for being too thin

Elsa Hosk is the latest victim of body shaming and people are calling her out on her latest Instagram for being too thin.

The 29-year-old Victoria’s Secret model shared an Instagram selfie on Wednesday where she is completely naked on her bed and people cannot stop heckling her for looking too skinny.

She posted the photo to her four million followers with the caption, ‘R u sleeping?’ and it received over 300,000 likes and over 2,000 comments with most of them bashing her for being skinny while others are seriously concerned about her weight.

Horrible: Elsa Hosk (pictured) is the latest victim of body shaming and people are calling her out on her latest Instagram (pictured) for being too thin

Skinny: The 29-year-old posted the photo to her four million followers and it got over 2,000 comments with most of them bashing her weight like this one

Beautiful: One fan of the Victoria’s Secret model said Elsa’s pretty but too skinny

Mean: Most of the comments were from people accusing her of not eating while others seemed worried by her extreme weight loss

Dead: This person even insinuated that she looked so skinny she resembled a skeleton 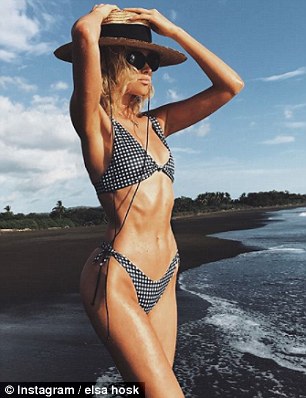 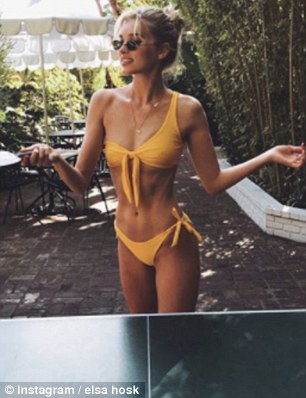 Bikini body: Elsa (pictured) posted the  innocent photo to her page and has posted many racy photos before

What was meant as a seemingly innocent photo of Elsa who has posted many racy photos before and has even bared it all in front of the entire world for many a Victoria’s Secret Fashion Show turned into a horrible platform of body shamers.

Actual fights were breaking out in the comments section over whether or not she was starving herself and some users were genuinely concerned about her health.

Most comments were aggressively mean but there were a lot of replies from people who seemed concerned about her and worried her weight may effect her health.

Another person replied to that comment saying, ‘I thought it was just me because others on here find this very attractive but she looks unhealthy thin.’

Meanwhile, another person commented, ‘If ya’ll call this healthy I prefer to be sick my whole life,’ while other people mostly commented things like, ‘Way too skinny, ‘Eat something, girl,’ ‘Girl do you eat?’ ‘Are you eating?’ and even, ‘Are you sick?’

The comments only got worse as some people really took Elsa’a picture to heart. One disgusted woman wrote, ‘Tbh I worry about the children looking at this picture and how they should think they should look like that. It’s horrible.’ 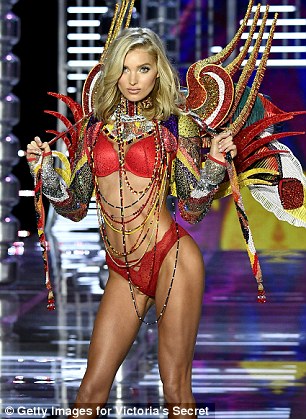 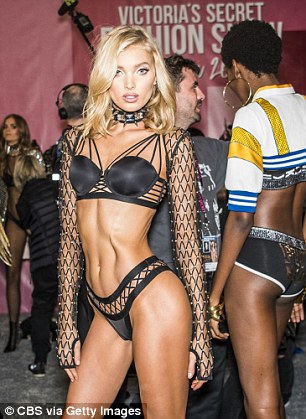 Model: The Swedish model even bared it all in front of the entire world for many Victoria’s Secret Fashion Shows (pictured)

Fake: This user even accused Elsa of photoshopping all of her photos

Shame: People took the picture and turned into a horrible platform of body shaming

Disgusting: Most of the comments were like this one where people asked her if she eats

‘Why do people find this attractive?’ asked one user.

‘Have you noticed that majority of them are so skinny, you can see their ribs. These aren’t their real bodies, they basically starve themselves and say they went on “diets” to look like this. It’s gross and I could never do that to my body,’ another girl wrote.

Another fan of the model commented, ‘She’s insanely beautiful but…insanely skinny to where it looks unhealthy.’

Someone replied to that user saying that it’s all models that look that way, ‘That goes for majority of the models like I think that’s so upsetting that they get extremely skinny.’

The mean comments kept coming but despite all the negativity there were a lot of people that had her back and stuck up for her. 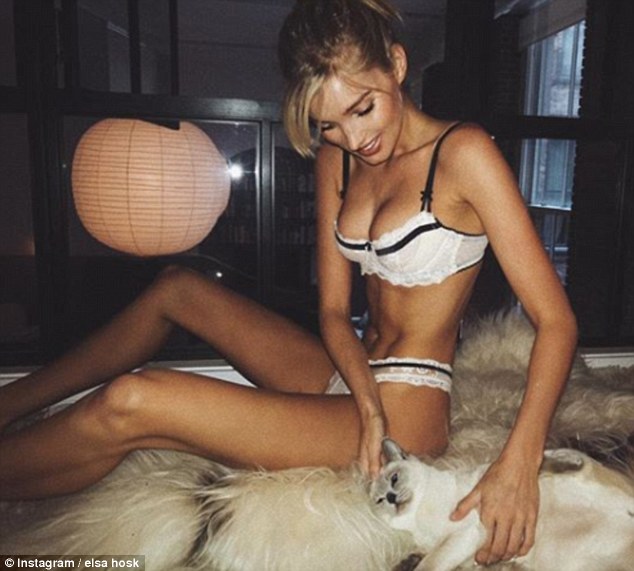 Flawless: So many people were accusing Elsa (pictured) of having an eating disorder meanwhile no one even knows her

Assumptions: One guy was quick to point out that Elsa looks much thinner than the other Victoria’s Secret models

Eat: Some users were sad that apparently Elsa hasn’t been eating

‘Seeing ribs isn’t a sign of being too skinny! I can see my ribs sometimes too when I pose certain ways. Don’t worry, I assure you these gals are healthy!’ one girl shared.

In defense of Elsa, one person wrote, ‘I understand your concern but Elsa is a model. Her job is to be thin. She’s a Victoria’s Secret model so she has people making sure she’s not doing this in an unhealthy way.’

While another fan of the blonde model gushed, ‘She’s not too skinny she’s freaking perfect.’

Despite Elsa not yet responding to the haters she has spoken up about her body insecurities in the past.

Terrible: Taking it upon themselves to diagnose the leggy model, people were saying she is very unhealthy

Gorgeous: Elsa (pictured) has not responded or spoken out about any of the body shamers yet

Back in 2016 she told FEMAIL that she’s felt insecure about her backside saying, ‘I used to hate my butt – like hate it.

‘In school I used to cover it up. I felt like it was too big like I felt like I needed to wear a sweater over it. It was awful,’ she confessed.

Body shaming has always been a major issue with social media and some people can be disgustingly rude to people they don’t even know.

Just the other day famous YouTube vlogger Teala Dunn, 21, was being shamed on her own Instagram after posting bikini photos.

People took to Teala’s comments section to bash her weight saying she was too skinny and didn’t have a big enough butt and her boobs were ‘too small.’