But before their trip, the actress, her husband Chris Hemsworth and their three children enjoyed another idyllic European destination – the South of France.

Last week, the genetically-blessed movie stars took their adorable clan, including daughter India, seven, and twin sons Tristan and Sasha, five, to famous Lake of Senpere in Saint-Pée-sur-Nivelle for some fun in the sun. 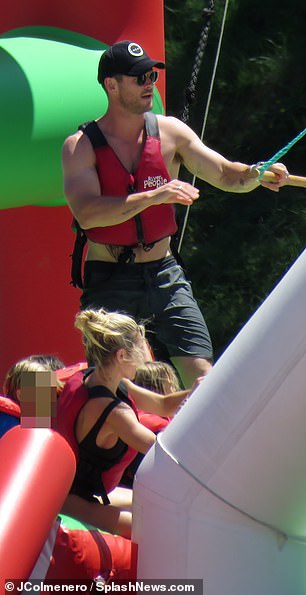 Making a splash! Chris Hemsworth and wife Elsa Pataky showed off their incredibly fit bodies during a fun family day out at Lake Senpere in France on Wednesday 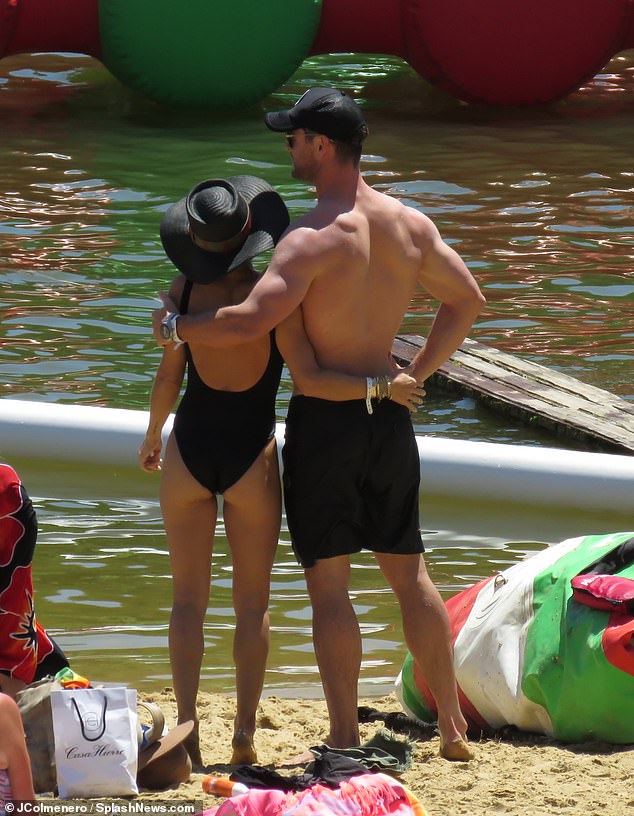 Cute! The couple cuddled up in as they enjoyed the breathtaking views from the lake’s beach

The family had a ball as they played in the sweltering heat on several giant inflatables, a water slide and a rope swing.

Spanish actress Elsa, who turns 43 this Thursday, showed off her incredibly toned figure in a high-cut black one-piece, while her equally buff husband flaunted his muscular Thor frame in boardshorts. 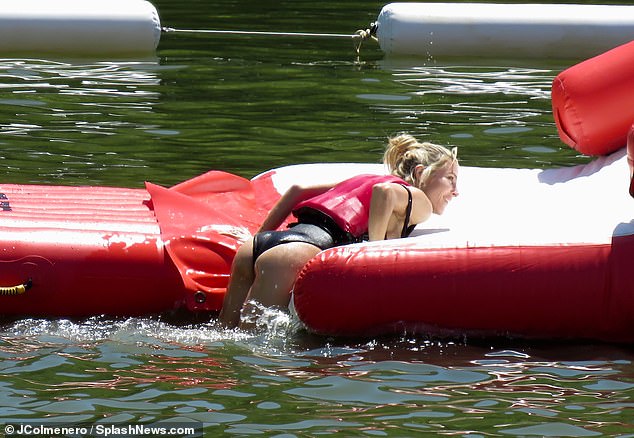 Bottoms up! Spanish actress Elsa, who turns 43 on Thursday, showed off her incredibly toned figure in a high-cut one-piece

The family stayed safe in the water by wearing matching life vests.

Both Chris and Elsa kept a watchful eye over their brood as they played on several water toys.

At times, the loved-up couple put on an affectionate display, sharing a cuddle as they took in the breathtaking lake views. 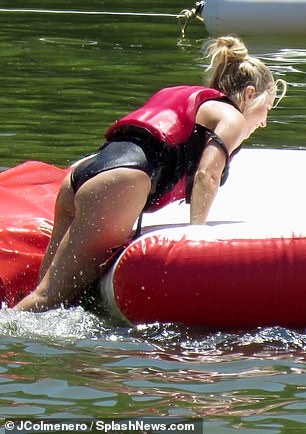 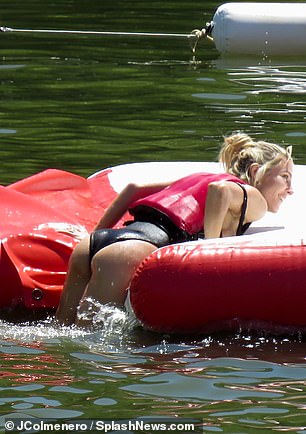 Having a laugh: The Snakes On A Plane stunner had a giggle as she tried to hoist herself up on one of the giant inflatables

The blonde beauty partied up a storm with her husband Chris, 35, and their Hollywood pals.

The mother-of-three shared a gallery of photos to Instagram on Monday, which showed her partying on a yacht and posing in front of a private jet. 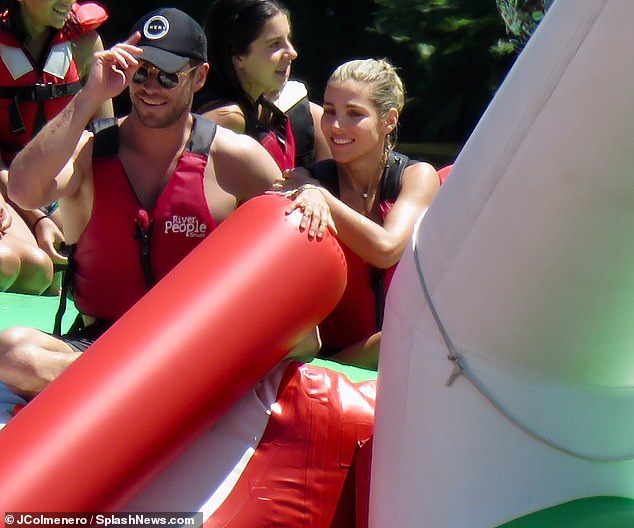 Happier than ever: The couple couldn’t keep their hands off each other during the fun-filled day out 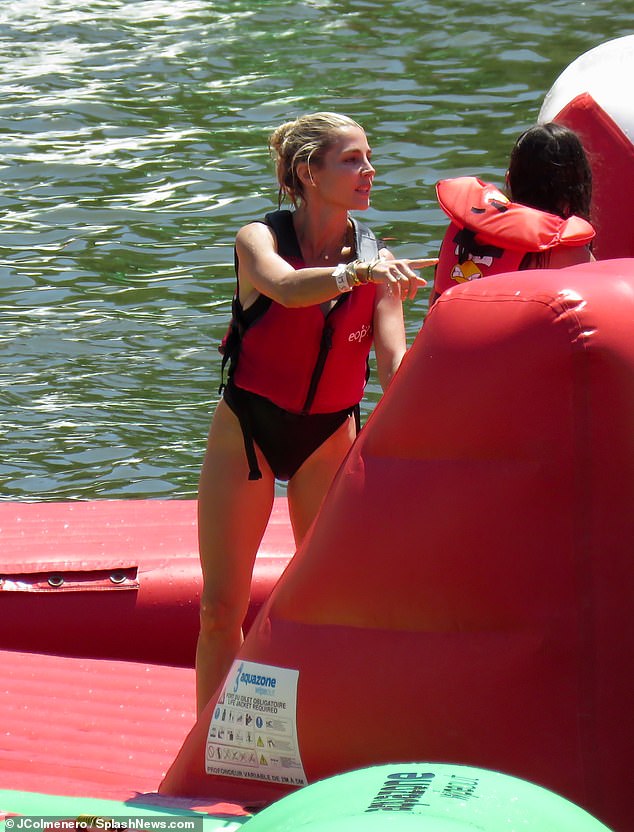 Stunning: Youthful Elsa looked stunning makeup free and showed off her tanned complexion in her swimsuit 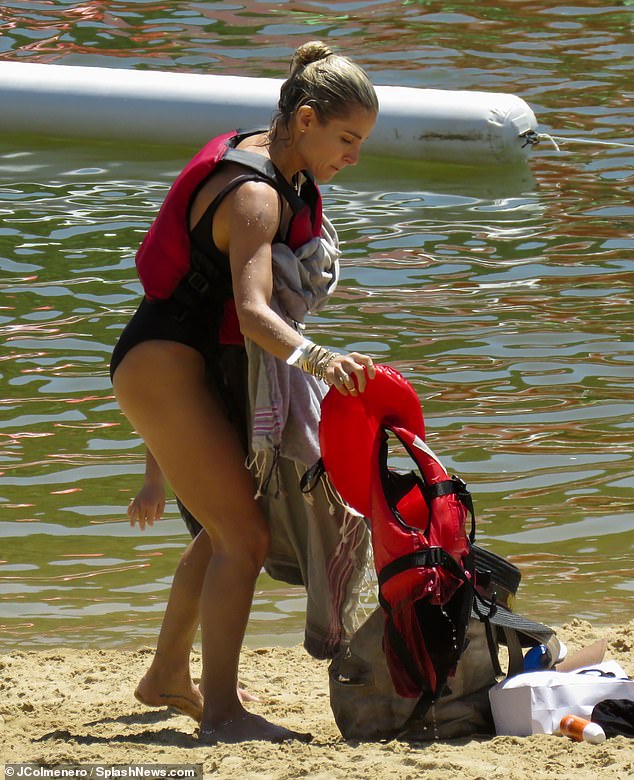 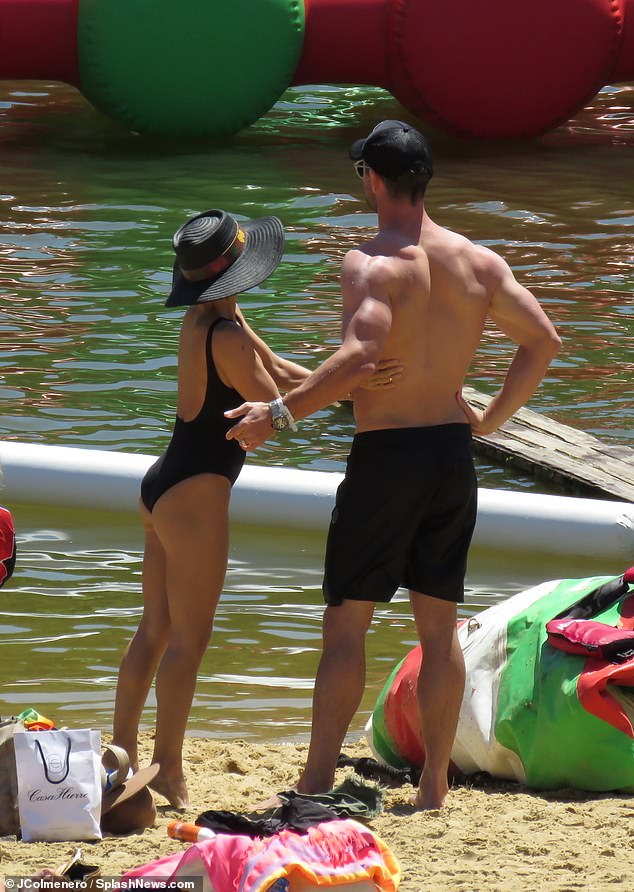 Happier than ever: The couple, who have been married for eight years, put on a tactile display

‘Early birthday celebrations with my favourite people,’ she captioned the gallery.

In one photo, Elsa posed with her friends on the beach against the backdrop of a hazy summer sunset. Another snap showed the group boarding a private jet.

The Fate of the Furious star made sure to tag the famous guests in attendance, including actor Matt Damon and his wife Luciana Barroso. 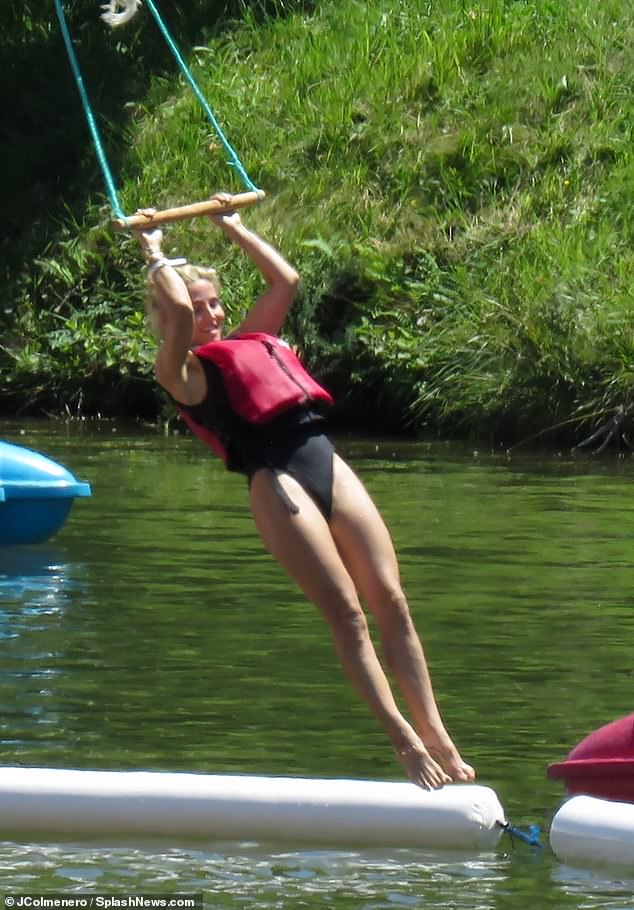 Skills: Elsa showed off her acrobatic skills on a rope swing

Several of Elsa’s photos showed what appeared to be a glamorous girls’ night out.

Other pictures and videos documented their party on a private yacht, which seemed to take place in the afternoon and early evening.

Elsa and Chris travelled to Spain with their daughter India, seven, and twin sons Tristan and Sasha, five – however the children were not pictured in Elsa’s gallery. 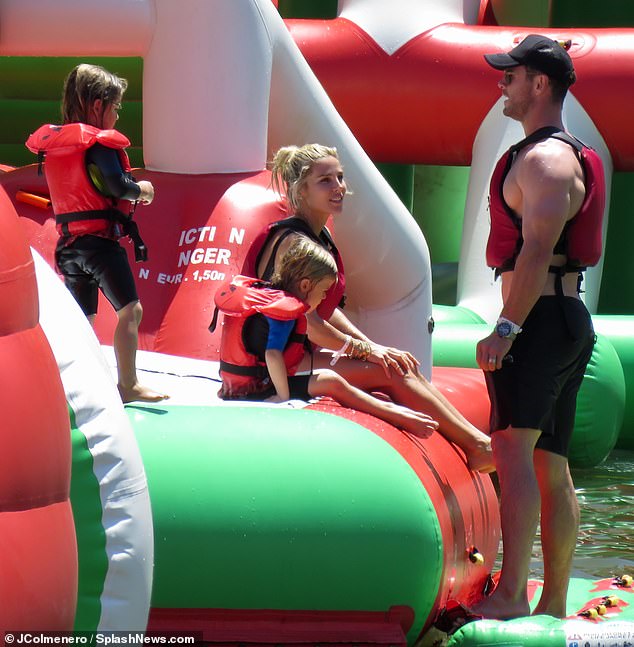 Be careful boys! Chris and Elsa kept a watchful eye over their brood played the inflatables and several other water toys 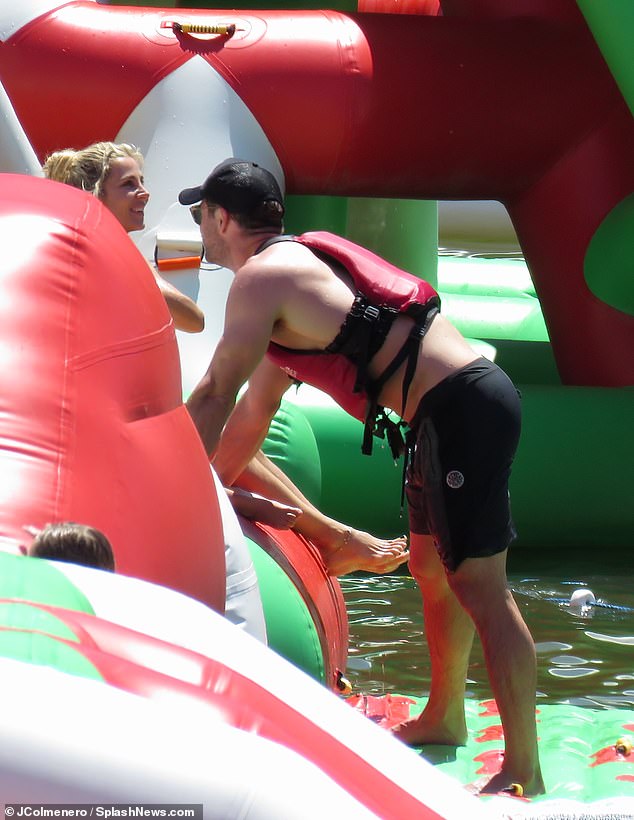 Kiss me quick! Chris leant in for a kiss with his beautiful wife as they continued to celebrate her birthday

The couple have been married for eight years.

In 2014, they quit life in Hollywood and relocated to Byron Bay, a popular tourist town on Australia’s east coast.

After three years living in a rental property, they will soon be moving into a ‘mega-mansion’ in Broken Head worth an estimated $20million. 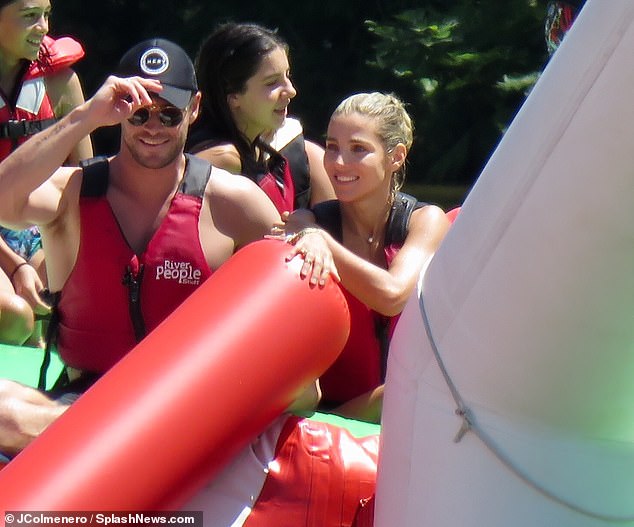 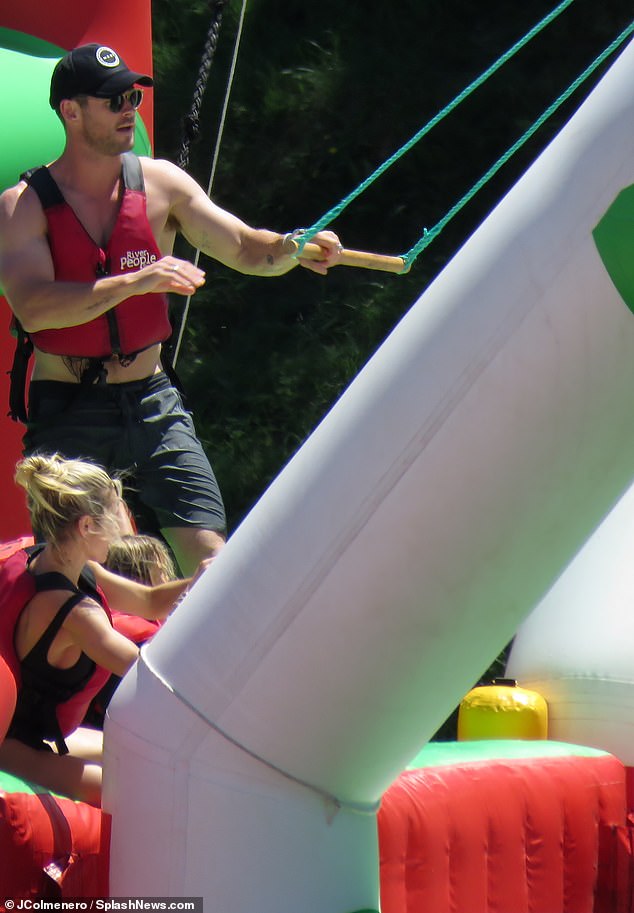 Action man! Chris put his own muscles to good use and showed off his superhero skills on the rope swing